So after a break making and painting some scenery, it's back to the Japanese platoon. These will be based on Eureka 20mm figures with a few extras in plastic from Waterloo/1815.  I like the Eureka Japanese, they are nice sculpts with a good range of dynamic poses.  Happily, except for one isolated case, they have none of the enlarged head issues I had with the Australians, but I'll talk about that unfortunate gentleman shortly.

So first up come one rifle section and the grenade discharger section.  These are a work in progress although getting very close to completion.  My normal order of painting is to base the figures on MDF, blend in the metal base to the MDF with some Milliput, then add some texture with sand glued with PVA.  The figure and base then receive a coat of grey primer.  I do faces first, then uniforms, followed by webbing, weapons and finally arms and hands.  Once these key elements are finished I then highlight weapons and add insignia etc.  So below are figures close to completion with all key flesh, uniform and weapons done: 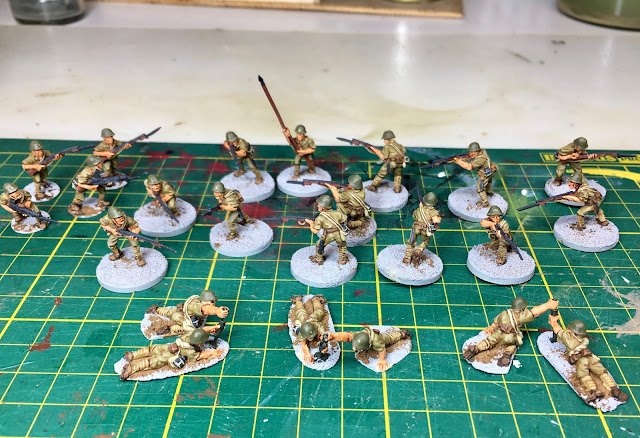 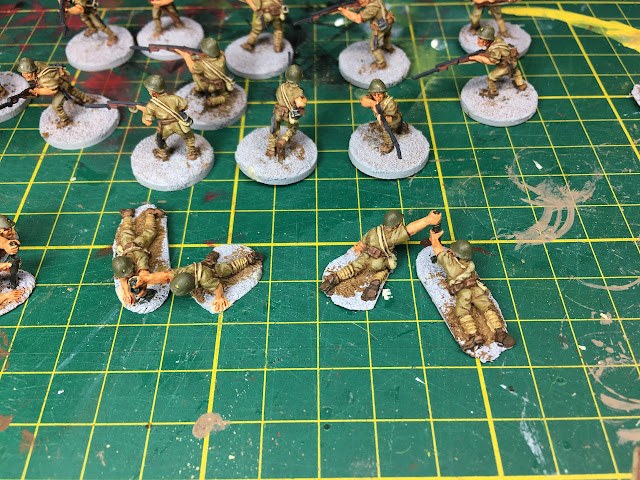 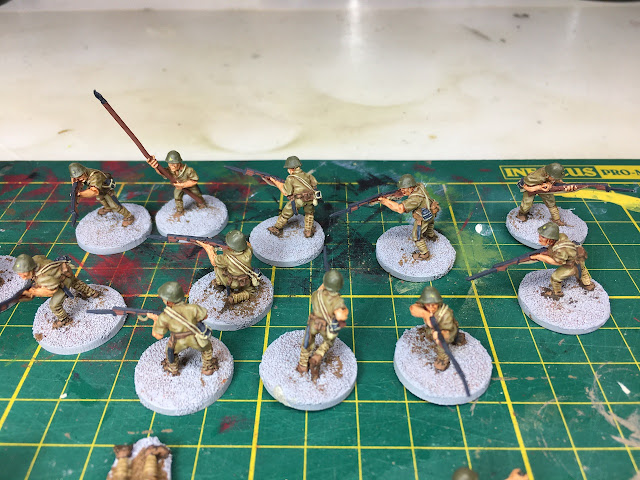 Below are the same figures after I have highlighted their weapons; added any insignia, then painted and dry brushed the bases.  You'll see I've also added a flag which I'm quite pleased with (more on that below): 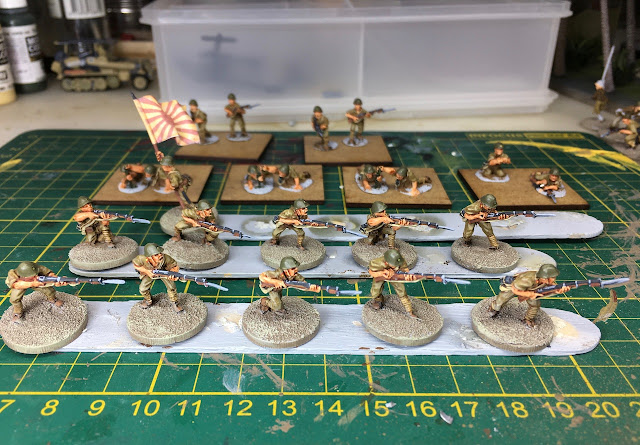 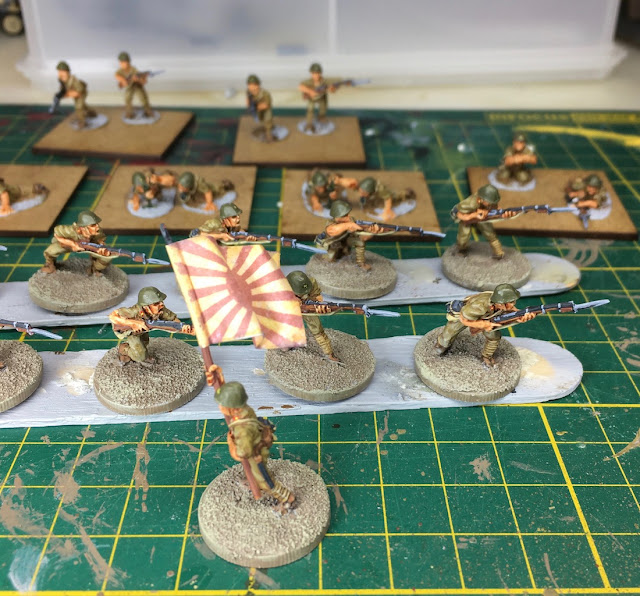 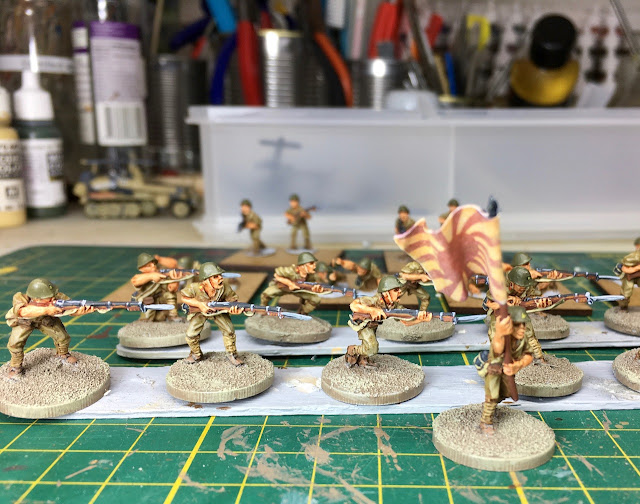 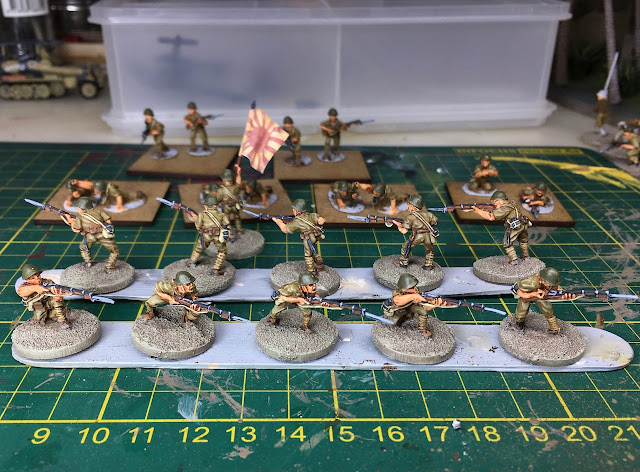 Next up they will be varnished in gloss (Tamiya Clear X22), left for two days to cure and then given a matt varnish with Testors Dullcote.  Final touches will be flocking of their bases.

Eureka include a standard bearer with each Japanese squad and I thought it would be a nice feature to add a flag.  While I know each regiment had a flag and it was of great significance to the unit, I'm not actually sure if every Japanese squad carried a flag, it seems unlikely, but I'm happy to be proven wrong.  Nonetheless I think it adds a nice little feature, so I plan to take a bit of licence and embellish each of my squads with a standard bearer.


The flag was created by finding a suitable image on the web.  I copied it into Word and resized it to scale with these figures. 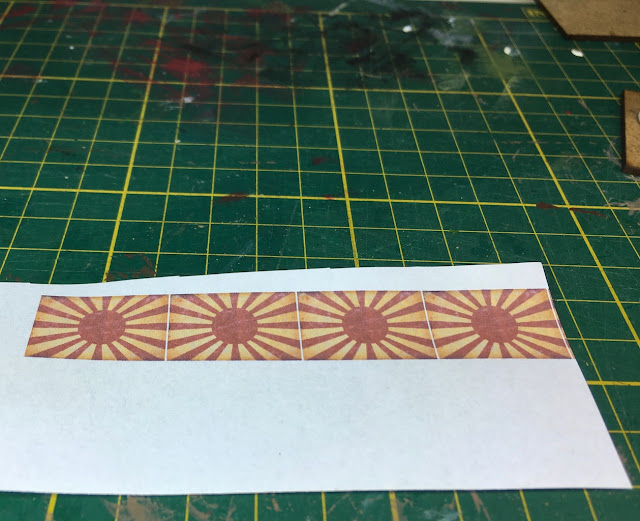 I cut them out so I could fold along the white line in between and create the flag from a single piece of paper.  The two halves were glued using slightly diluted PVA glue and then folded around the flag staff.  While the glue and paper are still damp I then created the folds in the flag.  It dries into a reasonably stiff finish that should keep its shape. 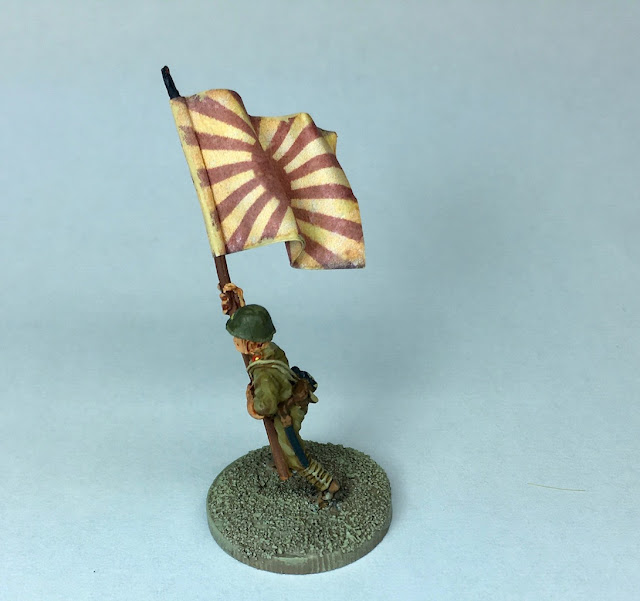 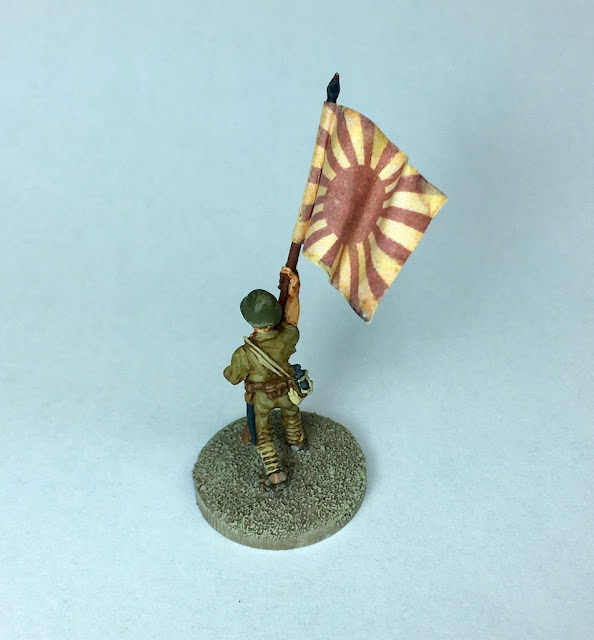 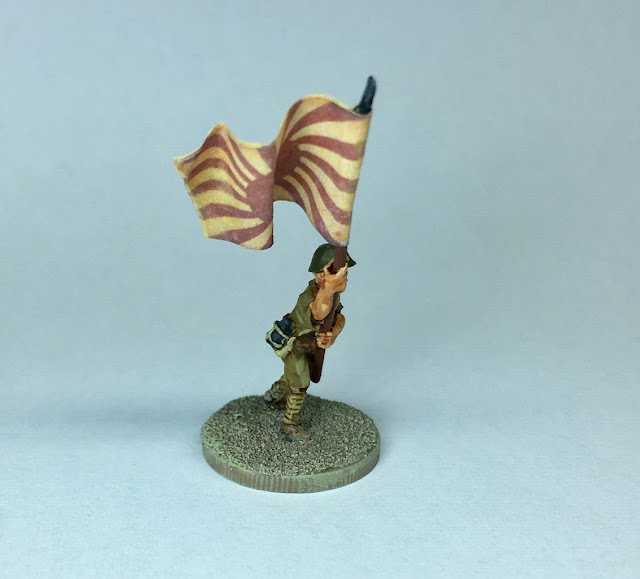 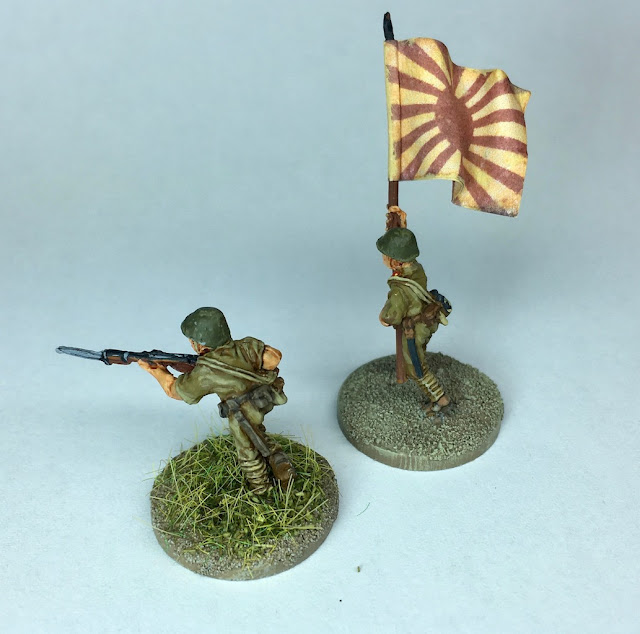 Last but not least, the enlarged head issue.  The squad leader that comes with this group has a fairly good pose, but suffers from a disproportionately large head and matching helmet.  He's the only figure with this issue, thank goodness.  He also has an odd face, somewhere between Munch's The Scream and a ghoul from a horror film.  Not happy with this one and want to find a substitute.

I've had a look online but haven't found any other Japanese command figures that really grab me. In actual fact I feel we are poorly served for good quality Japanese figures in 20mm.  What I do have are some figures I painted a while ago from the Waterloo/1815 Japanese Infantry set and their leader figures are better proportioned, although a bit on the slim side when compared with the Eureka figures.

I'm not utterly convinced this will work.  I'm going to try and see if I can do a head swap on the other Eureka leader to see if I can come up with an alternative solution and keep you posted on that one.
Posted by The Tactical Painter at 22:11