Advanced Squad Leader (ASL) purports to be a game about tactical leadership in combat in WWII. It comes from a long and noble line of hex and counter wargames from the Avalon Hill Game Company, with genetic roots in games such as Panzerblitz, Panzer Leader and Tobruk. Each of those games strived to improve on the ideas and game mechanics of its predecessor to develop a game that produced a better model of tactical combat in the Second World War. 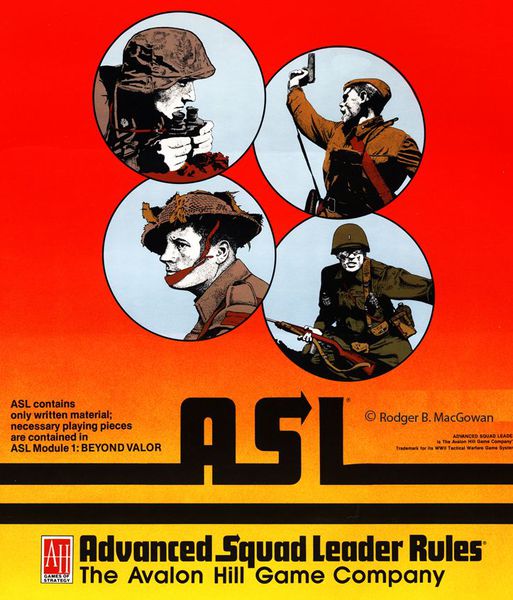 The IGO-UGO nature of Panzerblitz meant one side could dash armoured units across open ground from one piece of cover to another in the face of the enemy without that enemy having a chance to fire. That was rightly considered ‘unrealistic’ and not representative of combat in the period. In response Panzer Leader introduced the concept of opportunity fire, which in turn ASL further refined into the concept of defensive fire. These changes and evolutions didn’t necessarily make any of these a better ‘game’. Panzerblitz remains a challenging and rewarding tactical game. What these developments in game mechanics did try to achieve was an improved wargame - in other words, one that did an improved job of modelling some of the tactical aspects of the Second World War. The introduction of an opportunity fire rule in Panzer Leader had made those events taking place on the board feel more historically plausible.

I played all of those games, but none as much as I played Advanced Squad Leader. It became a game that dominated my gaming time for more than fifteen years. I won two of the Australian national tournaments at Cancon in Canberra (1993 and 2007). Here I am (on the right) playing the final in 2007 and receiving my trophy. 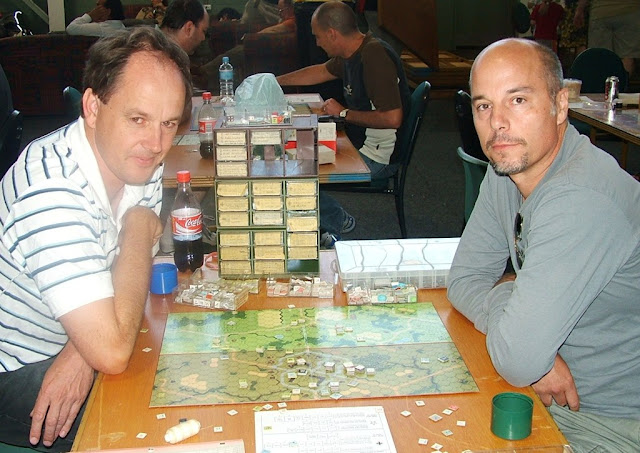 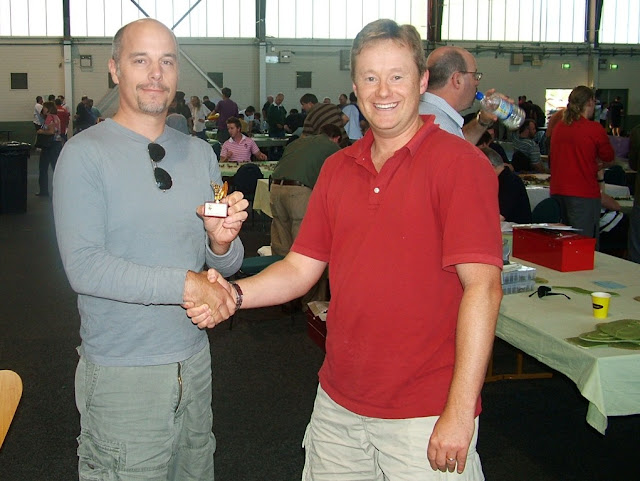 I also designed several scenarios, two of which J34 Men of the Mountains and J35 Siam Sambal were published in ASL Journal 2. 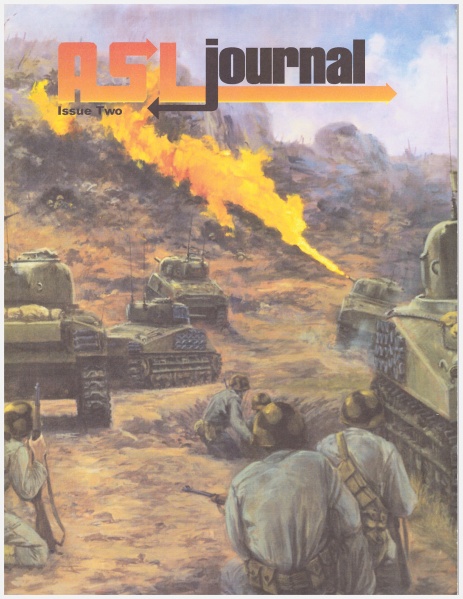 More recently I was trying to design new ASL scenarios set in Normandy and was immersed in reading about the actions there, trying to work up ideas. I was very interested in company and platoon level actions and particularly focussed on the command dilemmas faced by junior commanders. That brought me to a damascene moment where I realised that ASL had a number of inherent flaws that made it impossible for me to recreate the actions I was reading about using the ASL rule system. At first this didn't make sense to me. Here I was playing a game considered by many to be the ultimate Second World War tactical game and yet I was unable to replicate historical events I was reading about.

That was a turning point. ASL remained an immersive and challenging tactical game, but it was apparent that this wasn't a game that did a good job of modelling certain critical aspects of tactical combat in the Second World War. Last year, as my ASL material drifted deeper and deeper into storage, I realised I would probably never play it again and sold it all. So, why?

To my mind ASL isn’t just a ‘game’. It’s designed to be a wargame and very specifically one that reflects tactical combat during the Second World War. It is called squad leader for a reason. So we are entitled to ask, what does it show us about the command issues of squad combat in WWII?

Let’s not be mistaken, ASL does not attempt to be a game that exists in its own universe. I challenge anyone to find a single rule in the enormous ASL rule book that doesn’t attempt to reflect a ‘real world’ situation. We see rules that make a stone building better protection than a wooden one; we see that a unit moves more slowly through woods than in open ground; we see a jeep moves fast along a road while a tank risks bogging down in muddy terrain. ASL doesn’t inhabit a fantasy world, the rules indicate that we are trying to replicate events and military units that occurred in the real world. In fact the reference point for every single rule is the real world. However, try interjecting this thought into a discussion in an ASL forum and you will be mocked and derided for using the, ahem, ‘reality argument’. A bit weird. 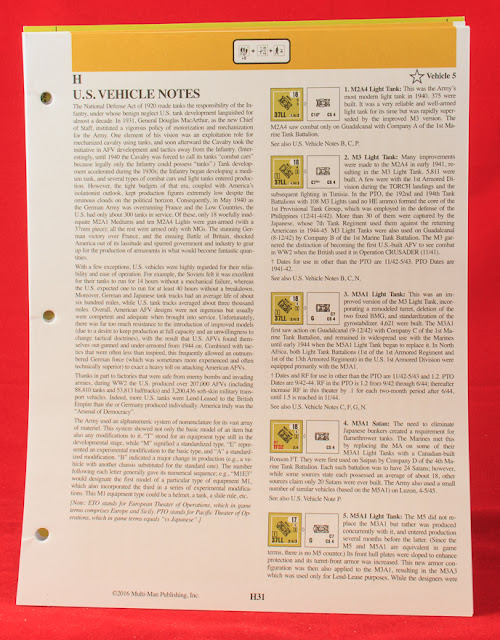 In this game about leadership and command during WWII, the first major issue is the chapter in the rule book about command and control. There isn’t one. That chapter doesn’t exist.

Here is a game about leadership and yet in ASL there is no chain of command, no platoon structure, in fact no military unit structure at all. It’s astonishing that this key element in the way military forces are organised and operate is missing in its entirety. You could be forgiven for thinking that the Second World War was run by corporals and their squads, with no higher levels of organisation or command.

The leaders that do exist within ASL operate more as unassigned die roll modifiers, free to roam the battlefield at will. Meanwhile the overall commander, you, is everywhere, magically issuing orders and assigning those leaders to whatever task pleases you. And those orders never go astray, never get misinterpreted and are always acted upon. In fact the only thing that prevents an order being executed exactly as you wish, when you wish, barring a few rare instances, is if the unit is fired upon and fails a morale check.
This assumes that the only thing that impacts battlefield performance is morale, as long as morale is good a unit can be relied upon to operate with almost robotic certainty. For all its emphasis on the technical details of weapon systems the rules manage to distil all human activity down to the determination of a solitary factor - morale. In essence the machines are the main focus of attention, far more than the soldiers that operate them and the commanders that lead them. That was certainly the dominant focus in game design in the 70s and 80s and it is where ASL shows its age.
Yet, if morale is such a critical component of game design how is it that a unit can suffer 40-50% casualties without any impact whatsoever on their overall morale? In fact ASL can be played right down to the bitter end with the last surviving half squad clinging on to the victory location to win. Not an unusual occurrence and something celebrated by players as a nail-biting game that came right down to the wire, evidence of how great the game is and how ‘well balanced’ the scenario. 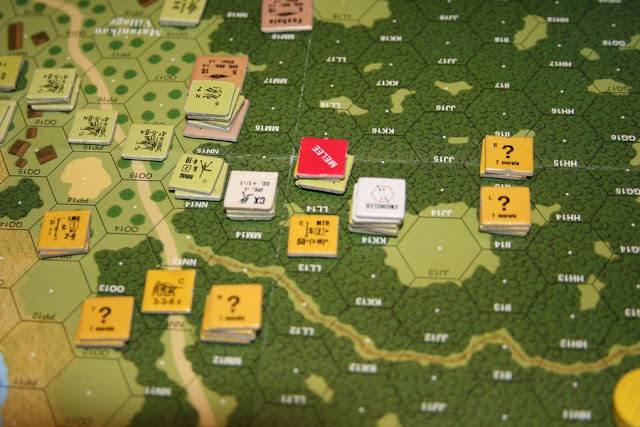 The rigid phase system means that combat unfolds in an orderly and predictable fashion. And more fool you if you haven’t mastered that sequence of play - forgot to fire smoke first? tut tut, too late to do it now. Many of the best players I know are mathematicians, engineers, actuaries and systems analysts, and it’s no wonder, the game rewards calculation. I know my squad can move x many hexes each turn, therefore I know they will arrive at a certain destination at a specific time and so, like a complex piece of choreography I plan my turns.

Only the enemy can interfere with my plan and only during specific phases of play. There will be no other surprises. As fog of war barely exists in ASL this normally means I know exactly where my enemy is and therefore I can move with impunity in certain areas of the battlefield without concern. Not only that, I can move with absolute predictability through terrain my units have never even seen before - every pile of rubble is just as difficult to walk across; as is every patch of woodland, every stream. No unit arrives at their planned destination any later or earlier than expected. If you’ve counted the hexes and planned the move your unit will arrive with impeccable timing at their destination. The only possible impediment to this utterly predictable movement is failure of a morale check should the enemy fire at you.

This is one reason ASL players spend a lot of time counting hexes and believe me, counting hexes is a big part of playing ASL. It's one feature that makes it much more about the game than about the history. Platoon and company commanders spend most of their time trying to deal with the unknown and manage men in the confusion of combat, but in ASL you spend your time calculating what is needed to deal with the known.

If this quote from the recollections of tank commander David Rinder is any indication of what combat is like, then ASL is wide of the mark.

“The frictions of war – chance, bad weather, mistakes and ill fortune – are the only certainties of combat, along with death, injury and destruction........war is a random and bloody business, where the weird geometry of chance has its play and its frictions and human fallibility and fragility abound. Combat is fast moving, confusing and often bewildering. There is no perfect science, only perfect intent that is unlikely to withstand first contact with the prevailing realities on the ground once battle is joined, and the enemy also gets a vote in the outcome."

And if ASL is not about the history then why the pretence? We have Chapter H and it's detailed listing of vehicles and guns; every ASL scenario is set in an historical setting with references to specific units in specific locations at specific dates, and if nothing else, there are a series of self-styled 'historical' modules set in places like Stalingrad. 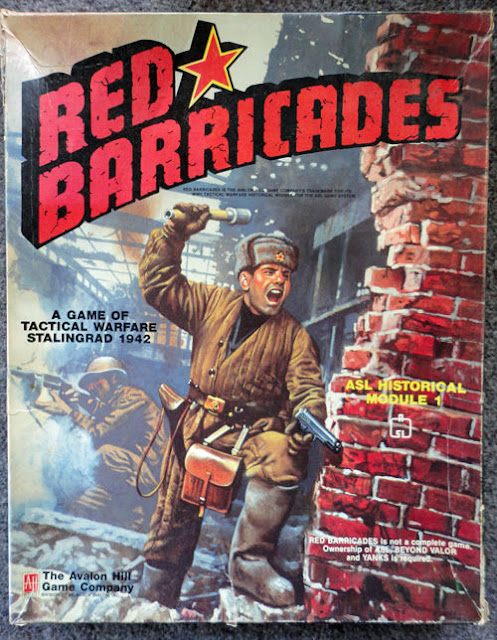 Yet, despite this facade of historical accuracy, the basic structure of infantry platoons and companies is absent. Take the Japanese infantry platoon for example. For most of the war it was a four squad platoon, with three rifle squads and a grenade discharger squad (the 50mm 'knee mortar'), with three grenade dischargers concentrated in the single squad. They were not parcelled out to other squads, it was doctrine to concentrate them. You wouldn't know or learn this from playing ASL.

It's strikes me as very ironic that the ASL community will argue vociferously that it's just a 'game' whenever anyone tries to trigger a discussion around how well the rules replicate the period and yet that's exactly what they do. ASL may appear to be about the Second World War, but in reality it's all about playing ASL. At times it does feel ASL exists in its own universe, a fictional, alternative Second World War that only exists in reference to the ASL rules, not to any other external reference.

The ASL rules writers tell players to focus on 'COWTRA' - concentrate on what the rules allow. The rule book being the ultimate reference point and arbiter. It's quite a contrast to a different set of rules for a similar level of combat in the Second World War that states "From time to time, situations will arise which are not covered in the rules. When this happens, consider what is and isn’t possible in real life in the relevant span of time. Discuss the situation with your opponent and come to an amicable agreement". Many ASL players reading this will find that statement utterly laughable.

So while the ASL rule book dedicates pages to Panji sticks or the slope of a beach for a beach landing, it neglects to deal with so many aspects of combat during the period, not least of which are the mechanics of command and control. To me that’s a major flaw in a game that has the words ‘squad leader’ in its title.

It’s a wonderfully challenging two player tactical game, don't misunderstand me, but not one about combat in the Second World War. I enjoyed it back in the day, but I won't miss it.


Posted by The Tactical Painter at 11:46