I’d like to be posting AARs of our 29, Let’s Go! campaign, but like everyone else being restricted to home has curtailed much of my gaming. The family will play board games, but the only action my miniatures are seeing is on the painting table. In that sense it’s not all bad, plenty of time to work on all those little projects I’d promised myself I’d get around to one day.

One of those is painting up the Perry 28mm plastic colonial figures I’ve had for a while. The British are the first to be assembled and see paint. I wanted to test paints and colours first and so here is my test figure. The base is not finished yet, but otherwise I’m happy with the result. One down, plenty more to go. 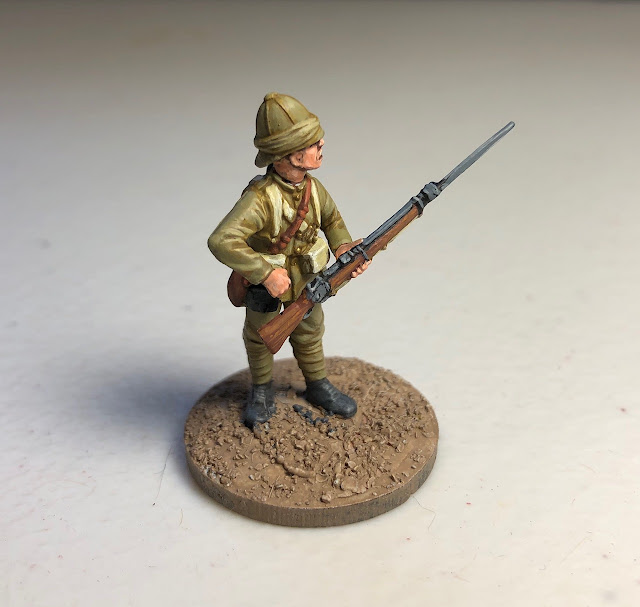 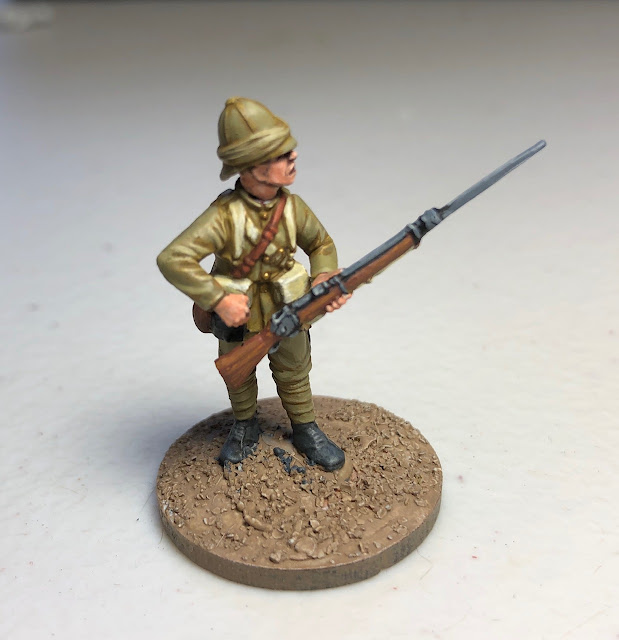 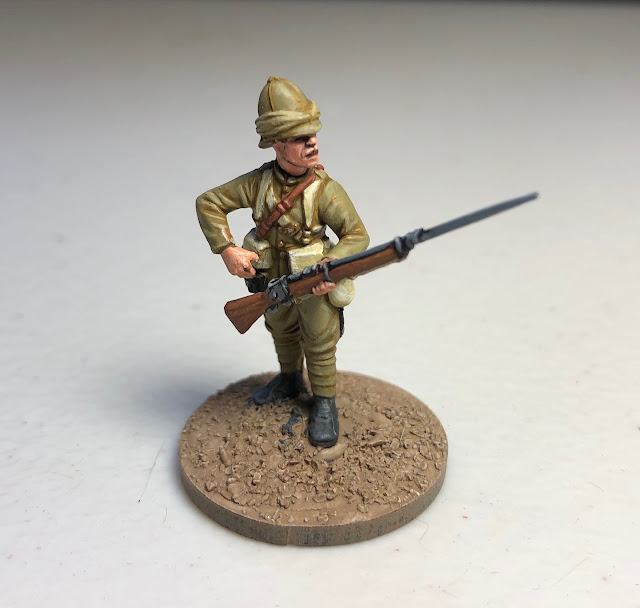 Prior to the lockdown I had been working on a platoon of British/Commonwealth for the early stages of the war in the Far East. For the later stages of the war I have the Eureka Australians in their jungle greens and these will also work for the British in Burma during the same period. Despite the incorrect attire those figures were used to play the Chain of Command campaign ‘Malaya 1942’, so while I’m not overly precious about having everything correct I do intend to play lots more in that earlier period of the war, especially once the Chain of Command Far East handbook is released.

With that in mind I decided to paint up a platoon in tropical kit and for that I’ve used the AB Figures western desert 8th army range. These will work for Australian militia and some AIF in the early stages of Papua New Guinea, as well as for British in Malaya, Singapore, early Burma, and Hong Kong. Of course no reason why they couldn’t also see use in North or East Africa as well, although I have flocked the bases for more tropical terrain. 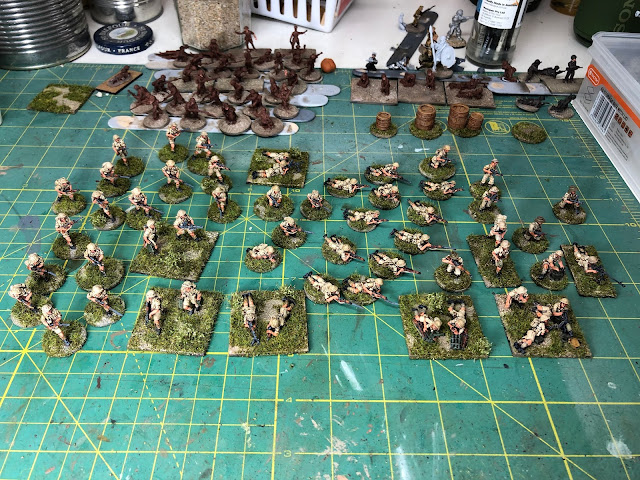 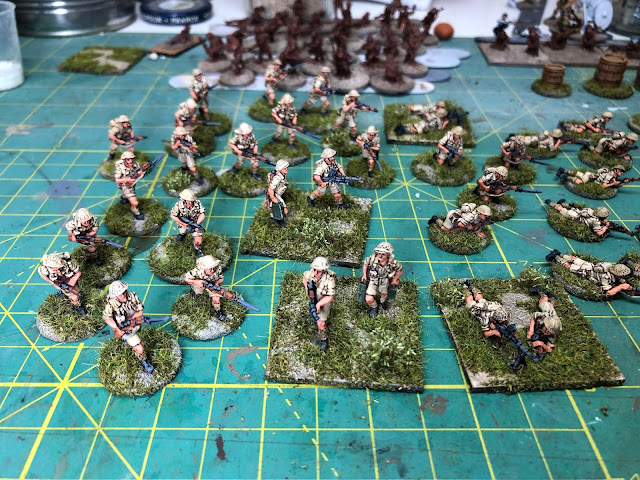 While the AB range is excellent it was short of a few poses that I needed for some of the early war units and that’s one of the small projects I’ve been working on. I needed a senior leader with a pistol which is not a pose currently in the AB mix. I remembered that I had some of the old Matchbox 8th army figures stashed away somewhere and so dug them out and thought I could use one of their figures with a pistol. However by the time I based the figure and compared it in size with the AB figures I’m using for junior leaders it was apparent the two were not at all compatible. 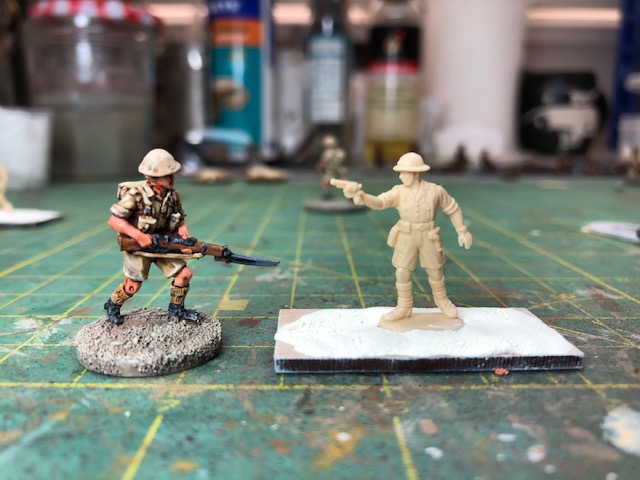 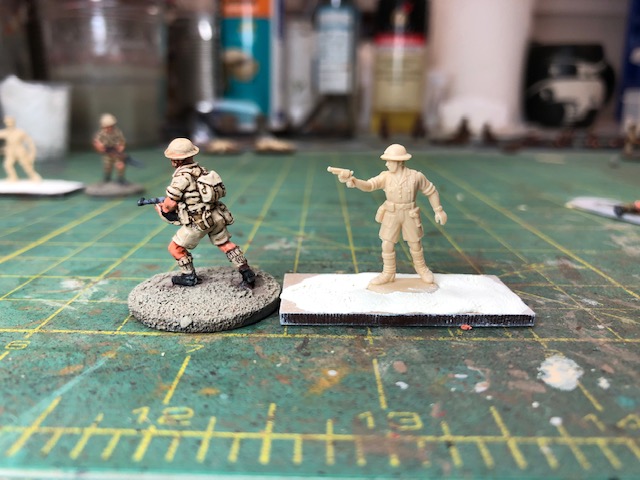 I also wanted a platoon sergeant and section corporals with rifles rather than Thompsons. While these latter could come from AB I opted to use the 8th army figure set from Wargames Foundry. These included an officer with pistol and some riflemen in different poses from AB. They are sculpted by the Perry brothers and are as good as you might expect. They are also a good fit in size with the AB figures. These will work well and now just need to have their bases finished off. 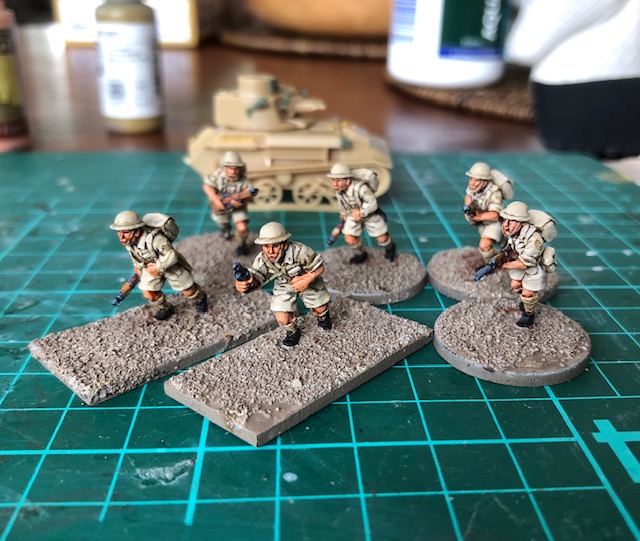 While reading and researching that early part of the war it was apparent that several British units were still equipped in outdated uniforms and equipment. Obviously the home Army was first with the new gear, while the more far flung reaches of the empire were still using older issue. Not all infantry platoons were armed with Bren guns, with Lewis guns still in evidence. Allocation could vary, either all sections having Lewis guns or in some cases two sections with Brens and one with a Lewis. I started hunting around for 20mm figures with Lewis guns but only managed to find a range of Early War Miniatures figures with topee tropical helmets. As it happens several units in Malaya and Burma still wore the topee and had the 1908 webbing so those EWM figures would not be out of place (they’d also be useful for the 1940 East Africa campaign, Syria-Lebanon and Iraq).

Pictures below show British troops training in Malaya just prior to the Japanese invasion. 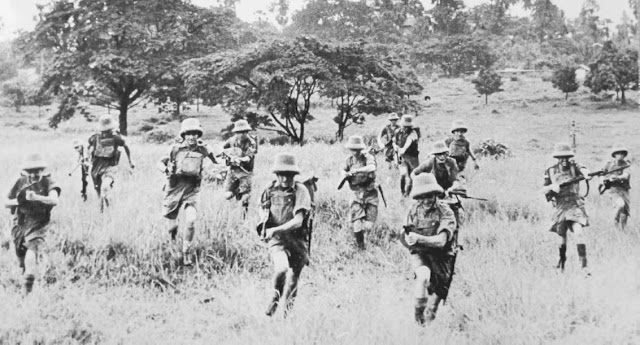 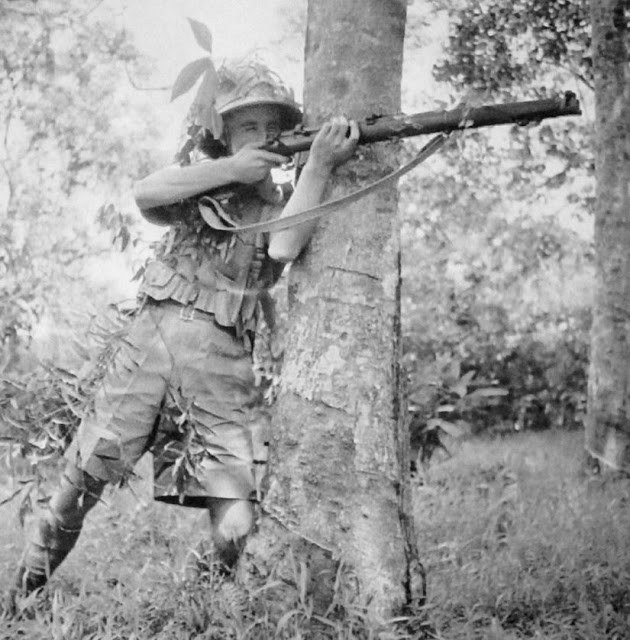 I didn’t need them, but you know how this goes and so I ordered enough for a platoon. I’m not very impressed with the sculpts, they’re rather crude and somewhat short of the standard of AB Figures. That said, with a lick of paint and if viewed at playing distance they are passable.

Here is the first section and some senior leaders just waiting to have their bases finished. 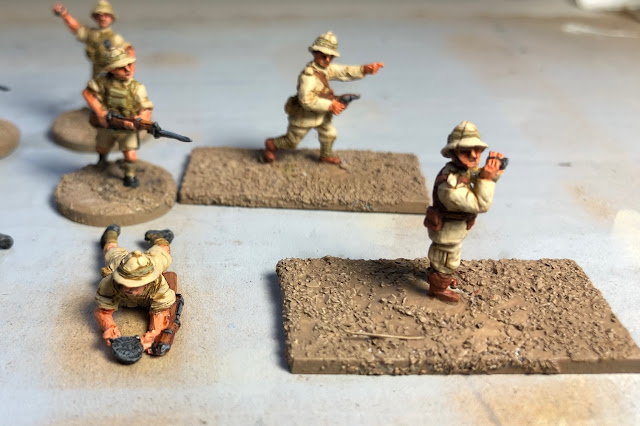 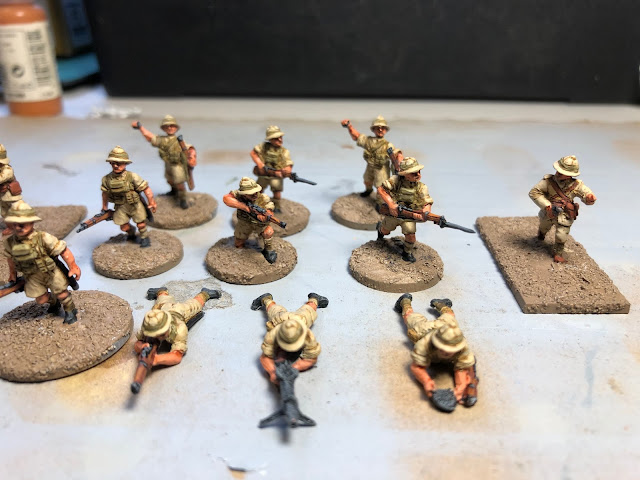 In terms of their opponents, my Japanese force is fairly complete. I did however need a few more figures to fill out the ranks of the rather large early war platoons. Researching the battle at Milne Bay in Papua New Guinea I also discovered the Japanese SNLF units had a grenade discharger squad of four teams, leaving me short of one team. In addition the platoon HQ included the senior leader and two men armed with SMGs who together with the senior leader make a small team. As I don’t have any SMG armed Japanese I wanted to add a few that could fill this role. They are also useful for junior leaders who can often exchange their rifle for an SMG as a support option.

While I’m happy with the Eureka Japanese (see pic below) I wanted to introduce a bit of variety in poses and so decided to look around to see what was available in other ranges. 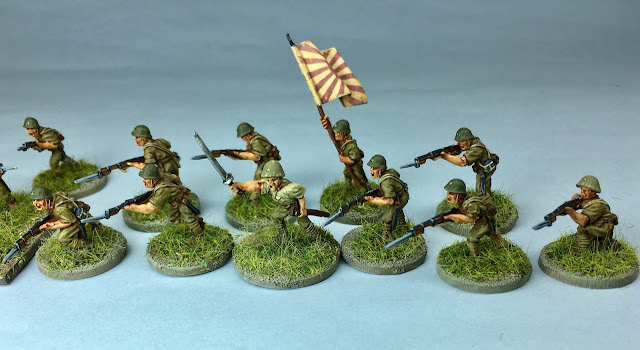 The first batch of these additional figures came from the old Wartime Miniatures range (now sold by Simon’s Soldiers). This included a ten man rifle squad, whose leader would make a good Gunso (the inferior senior leader who is the platoon’s second in command). The prone LMG team offered some variety, as the Eureka LMG teams that make up the bulk of the existing platoon are all in standing poses. The remaining riflemen give me the extra figures I need to fill the ranks of a large platoon.

In the same order I added two grenade discharger teams, a gun crew and a flamethrower. Unfortunately they don’t do any figures with an SMG. 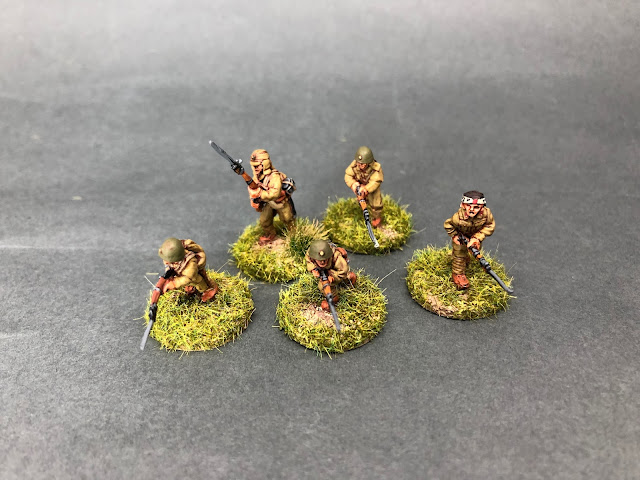 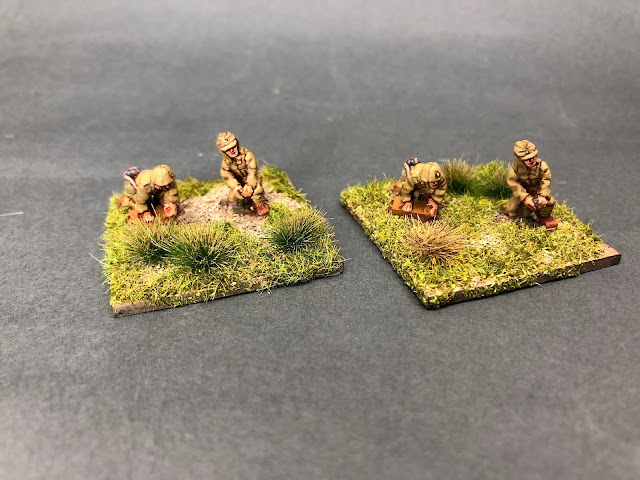 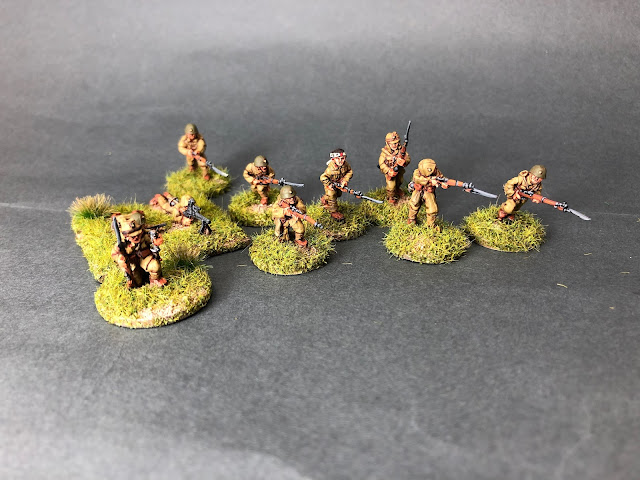 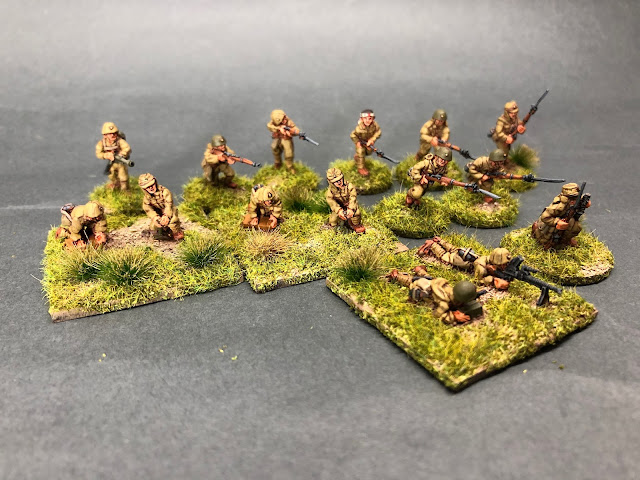 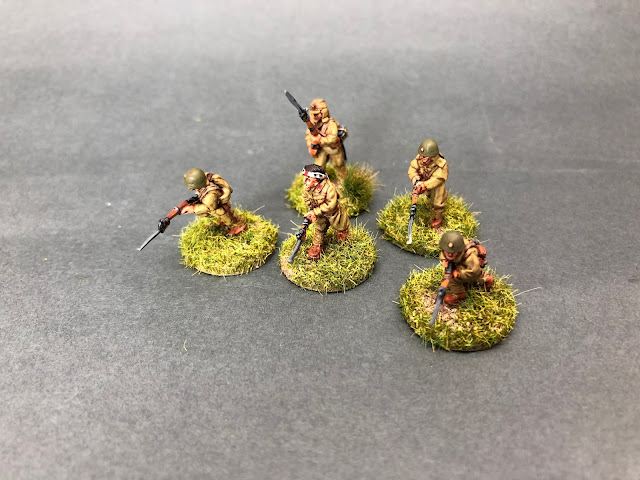 While I was looking at the Early War Miniatures site I noticed they had a range of Japanese that included figures with SMG. The sculpts didn’t look that great on the website, but as these were the only figures with SMGs that I could find, I took the plunge and added these and a few others when I ordered the tropical British figures. Unfortunately when the figures arrived the SMG sculpts were as bad as, if not worse than I feared. I based two as junior leaders and decided I would paint them in summer tropical shirts. The other two would be for the SNLF men who accompany the platoon leader. Sometimes a bit of paint can do wonders to lift a poor sculpt but regrettably these are beyond redemption. 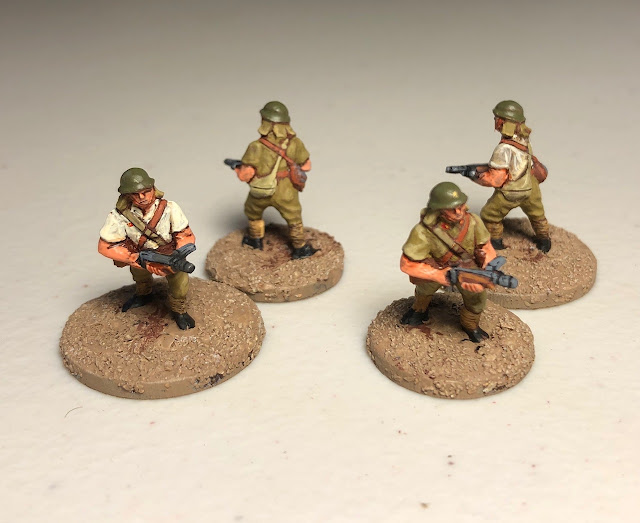 I’ve since discovered Scale Miniatures 172, a range I was unaware of, and ordered some of their figures with SMG. Judging by the images on their website and a recommendation from another gamer they look far superior. Let’s hope so, I’d be happy to retire the EWM figures before they fire a shot in anger.

Having said that some of the other EWM figures are much better and must be the work of a different sculptor. They have a rather nice bugler. 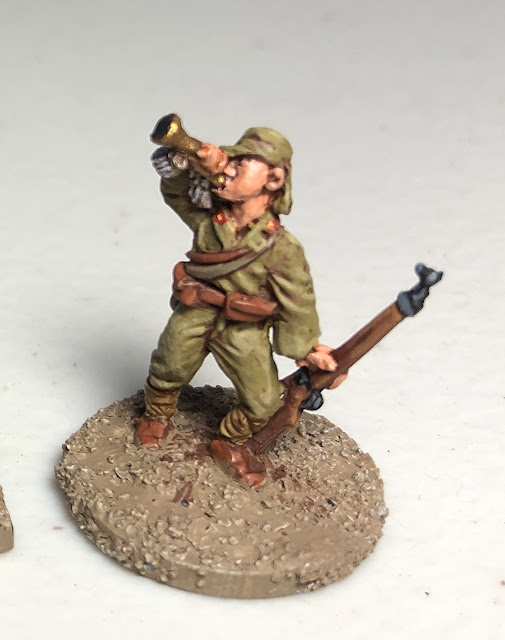 The man throwing a grenade is also a good sculpt, with one exception - he has spectacles. I didn’t notice until he was primed and I was about to paint him, but really, why manufacturers feel the need to have Japanese in spectacles can only be explained as a concession to some lingering and unpleasant propaganda stereotypes from 80 years ago. 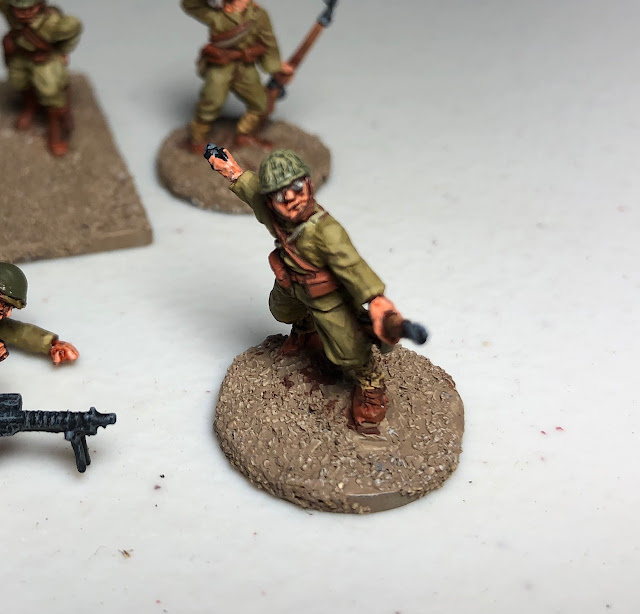 So, overall a mixed bag from EWM but a few more useful additions to the Japanese collection. 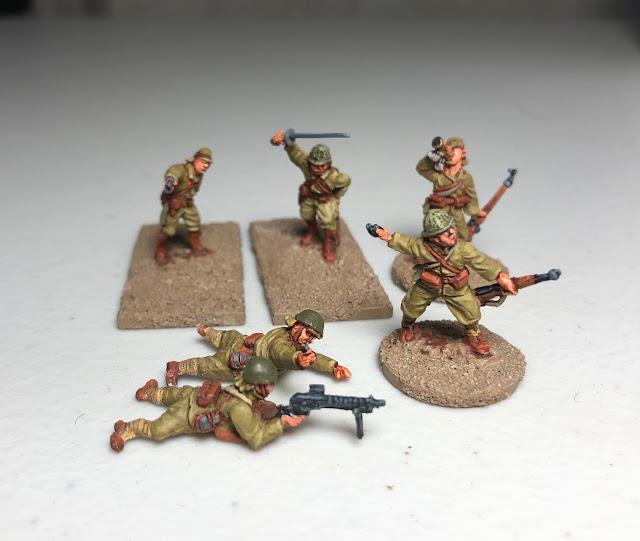 Staying on the Far East theme I plan to rebase the Chinese force that I created several years ago for Crossfire. I want to base them individually to create a platoon for Chain of Command. Most of these figures are from the Caesar plastic Chinese army set but have been converted using Airfix heads to represent the elite, German trained divisions. That German influence is apparent in the platoon structure which mirrors the early-war four squad structure. 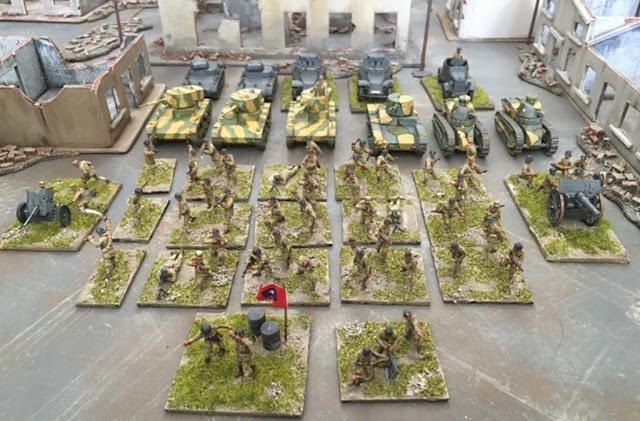 To make sure I have enough figures I took the opportunity to add some of the Foundry range when I was placing my order for the 8th army figures. Unfortunately these come with eight of the ten figures in the same pose. Nonetheless they are lovely figures and when scattered across four squads will not be that obvious. I particularly like the officer, who is a delightful sculpt and will be the senior leader of the forthcoming platoon. 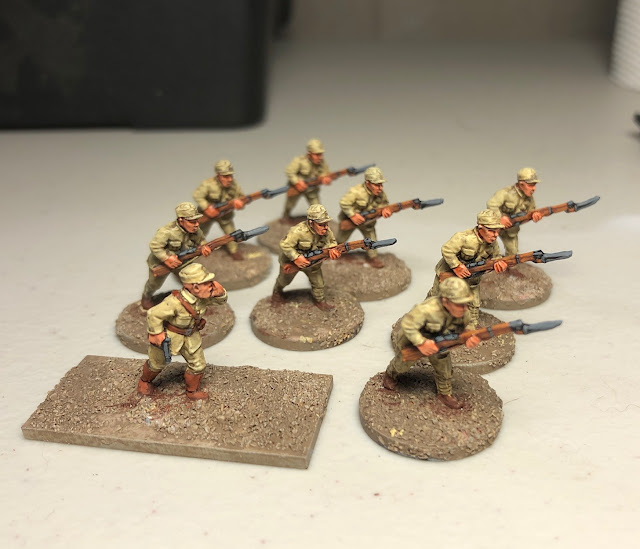 All in all, despite the lack of gaming, it’s been a fairly productive period on the painting front and it’s been good to fill a few gaps in various collections.
Posted by The Tactical Painter at 08:44 12 comments: