28mm House with stone chimney for the AWI

If it's true to say you can never have enough trees then it's probably true to say that you can never have enough houses. To be honest, I don't think that many houses are actually needed to game the American War of Independence, as most encounters took place in fairly rural country, in fields and in woodland. Nonetheless I've needed to add at least one more to the collection and yet somehow I'm sure it won't be the last. This latest is a small cottage with a stone chimney and porch, one of the MDF models from the Sarissa Precision 28mm range.

I had previously made a smaller house without the porch, so this new one is intended to complement the other to help create a small settlement. As with the earlier model I will make a few modifications to give the building a more unique character and to be compatible with the other. 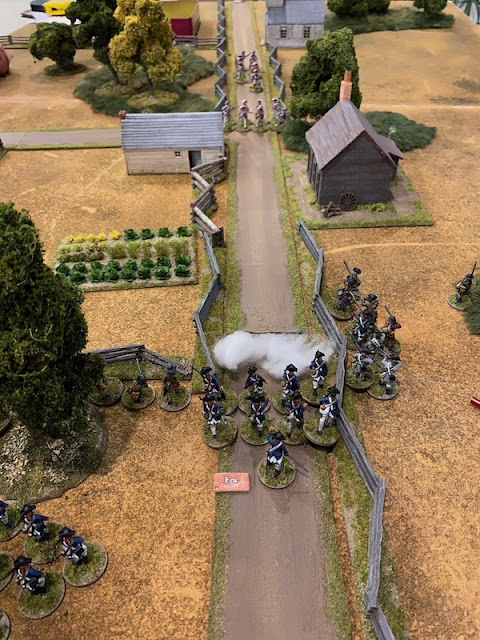 I've found that MDF buildings can be quite transformed with just the simple addition of tiles to the roof, but I also waned to enhance the appearance of the stone chimney breast which is quite slim in its original MDF form. With the first model I went with a more rustic look and created a slab wood roof using laser cut card from Charlie Foxtrot Models. I also used brick printed wallpaper to wrap the chimney and you can see the finished result below (and in the game above). 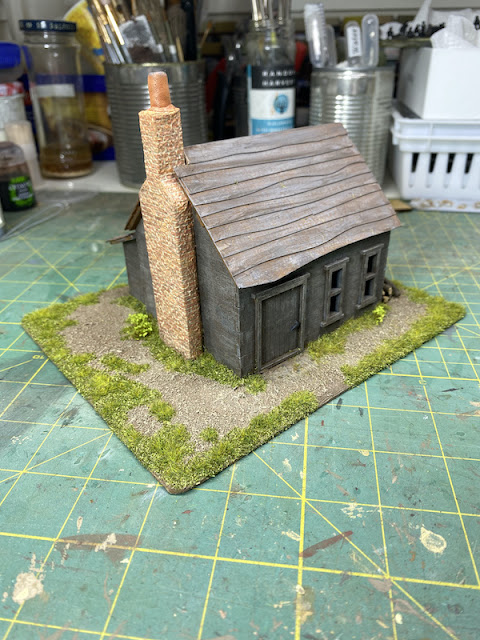 That building has already seen action in games of Sharp Practice and one where we tried out Muskets & Tomahawks. 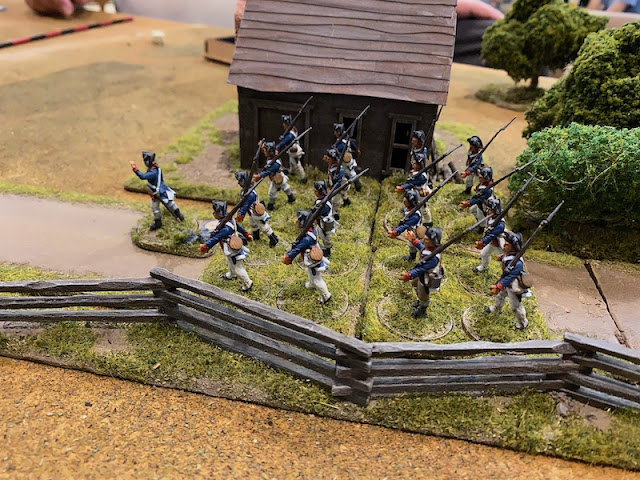 I intended to follow a similar plan with the new model. While the idea is to replicate the look of the chimney in the same way, this time I will use tiles for the roof, once again from Charlie Foxtrot Models. 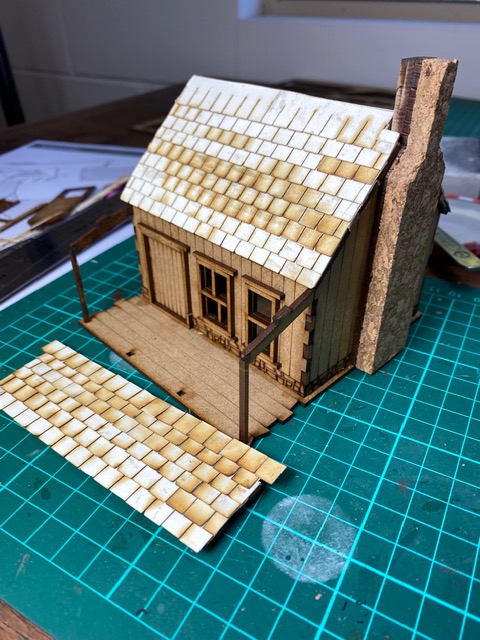 The chimney breast has been thickened by cutting a piece of cork floor tile to match the existing shape and then glueing it in place. 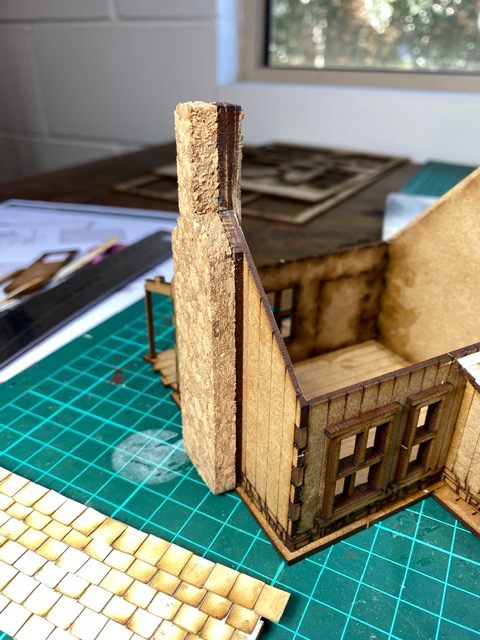 Before any more work was carried out the whole model was primed. As you might notice there are a few other additions. I made a simple chimney pot from Milliput to finish off the chimney breast. I also used strips of card left over from the roof tiles to cover the corner joins of the walls to look like wooden planks. 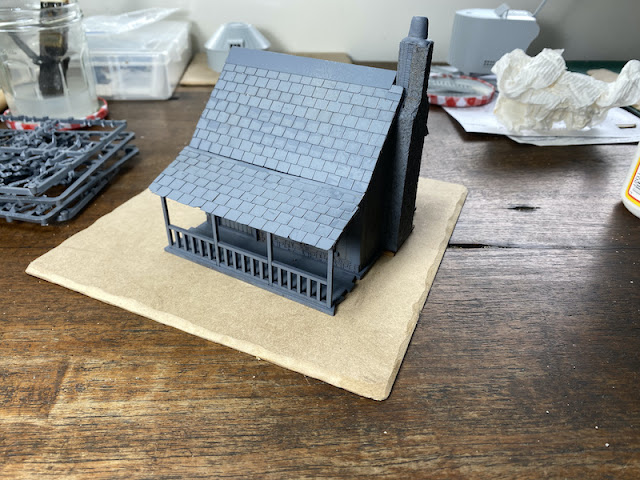 The chimney breast will be wrapped with wallpaper that has been printed with scale bricks and embossed. I've seen this used very effectively by others and so bought several A4 sheets from a supplier I found on eBay. It works extremely well to create a very effective look that's relatively quick and easy to do. 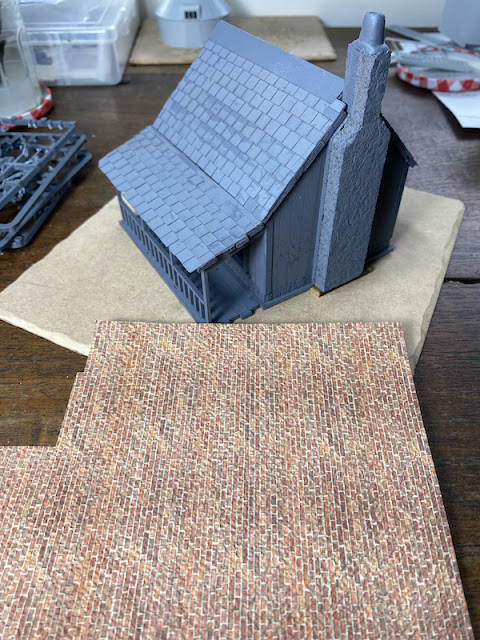 First the house was painted using craft acrylic paints (mainly to avoid getting paint on the brick wallpaper). Rather than the bare wood of the earlier house I went for a slightly faded whitewashed look. As this house has a porch I'm assuming the owner is looking for a more gentrified look than a pioneer cottage (clearly with an eye on future real estate prices). Once the painting was complete then the brick effect was applied to the chimney and around the base of the house. The paper is attached using diluted PVA glue. I find letting it soak into the paper for a minute or two helps to soften it, making it easier to bend and conform to different shapes. 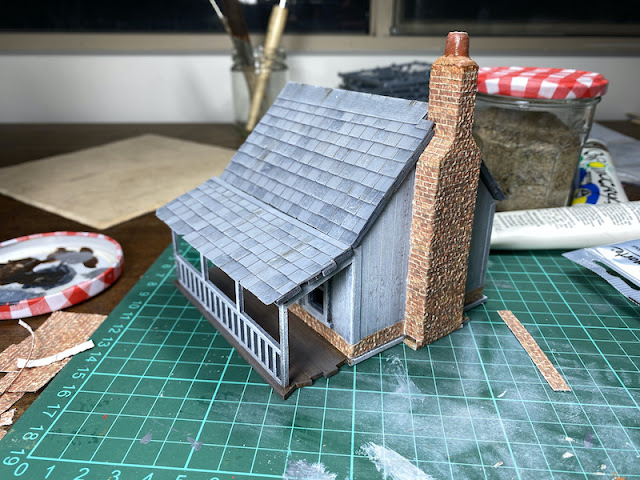 I find the key with the roof tiles is to vary the shade of grey randomly across different tiles. It's not the quickest job in the world but neither is it as laborious as you might think. I then unify the colours by giving the whole roof a dry brush in a lighter shade of grey. 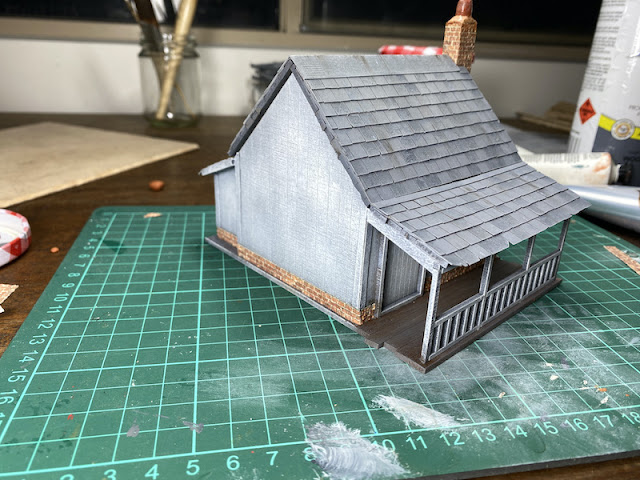 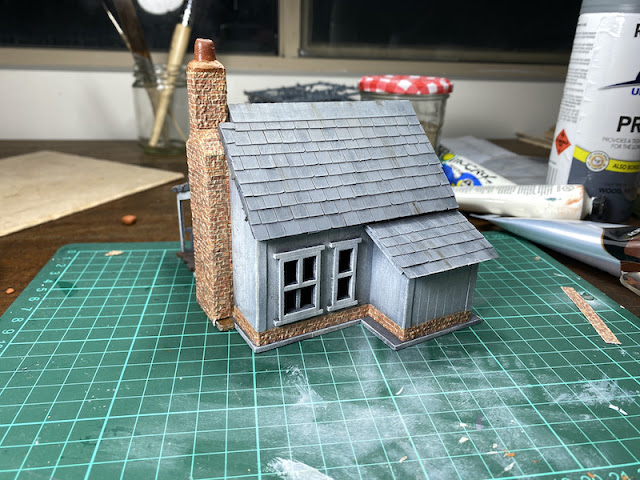 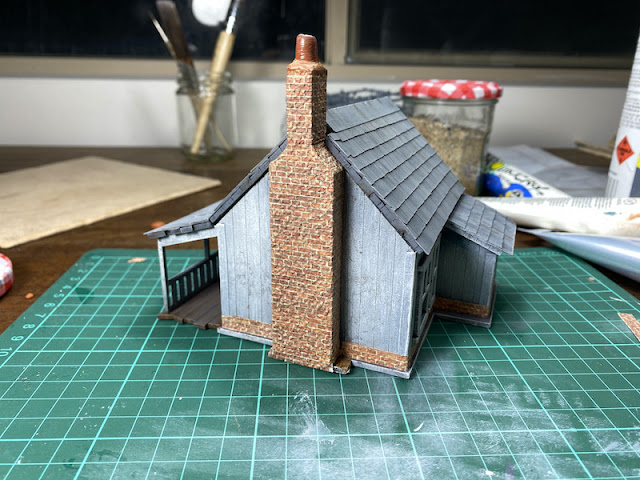 The last thing to do was add a base which was cut from MDF and textured using PVA glue and sand. I use a flock effect for the ground cover, building up in layers with different types of flock and static grass before finally adding a few tufts here and there. 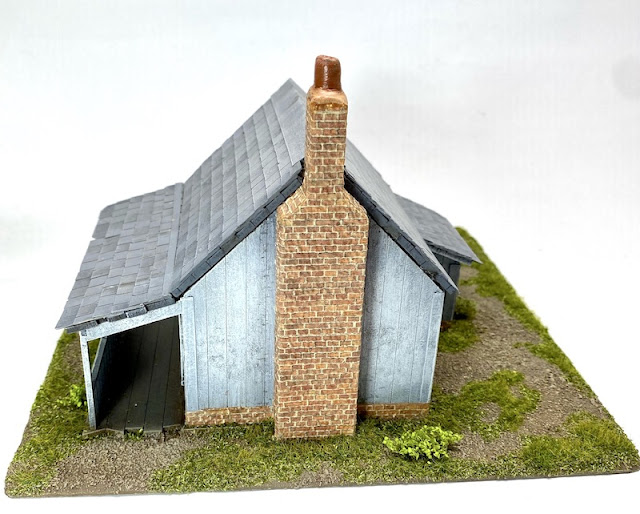 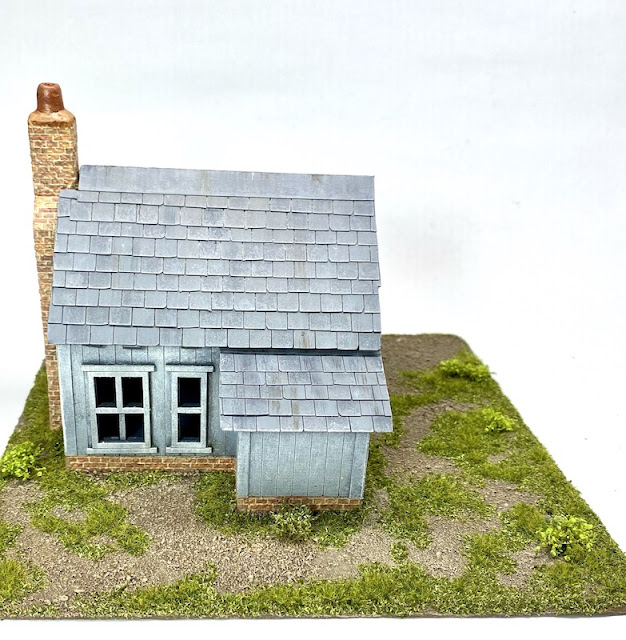 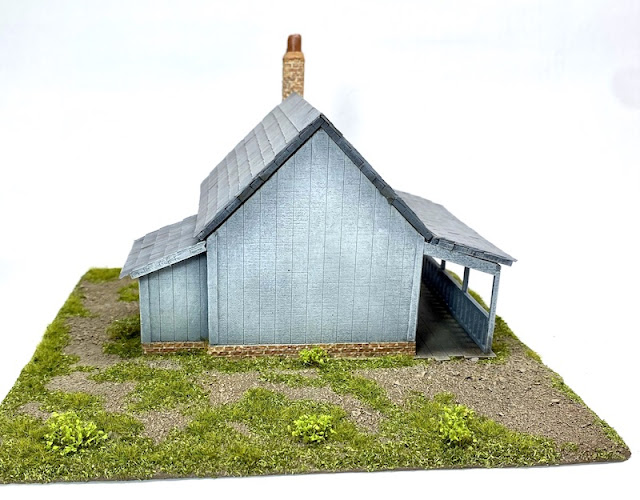 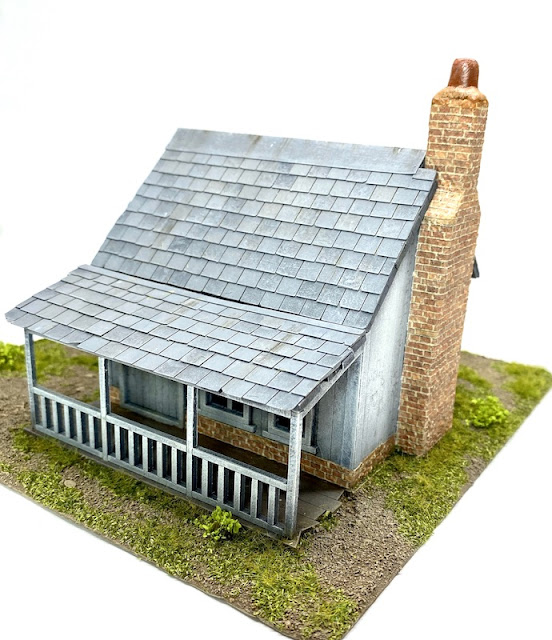 Posted by The Tactical Painter at 12:04