Wound markers for leaders in Chain of Command

I've been trying to work out a practical way to record wounds to leaders for my Chain of Command games and I think I've settled on a solution. 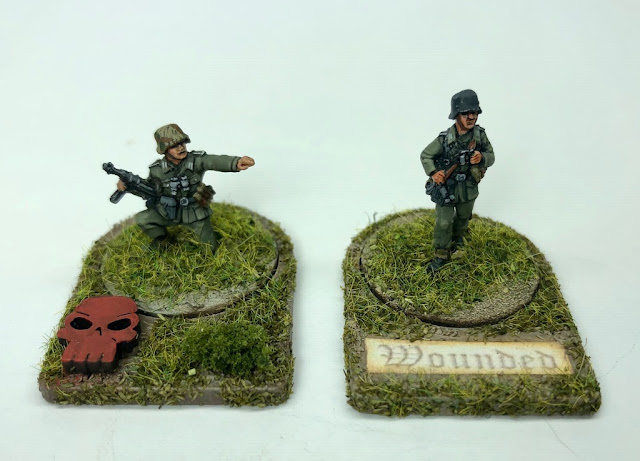 A few years ago I went to some effort to create actual wounded figures to replace leaders. I was very happy with the result but unfortunately it hasn't been practical to do for all nationalities (you can read more about them in this post). 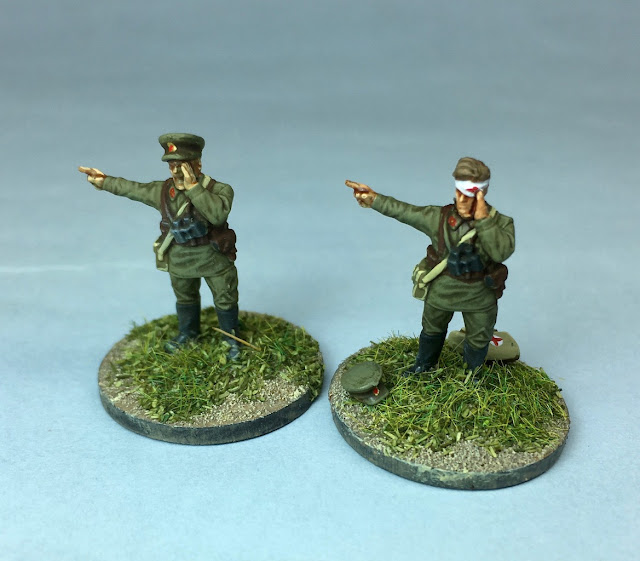 One issue I really wanted to address was how to record the wounds that occur on a wound roll of 2 or 3. This results in a temporary wound that makes the leader ineffective for the remainder of the turn. We tend to refer to this as being 'stunned', given its temporary nature. This helps differentiate it from the light wound that occurs on a roll of 4-6 that will stay with the leader for the remainder of the game.

I came up with German and British figures to represent the longer term wound and converted other figures to show the 'stunned' leader supported by one of his men. The problem is I don't have enough of them even for the British and Germans and I only have lightly wounded figures for my Russians. That leaves the other nationalities without any marker at all. 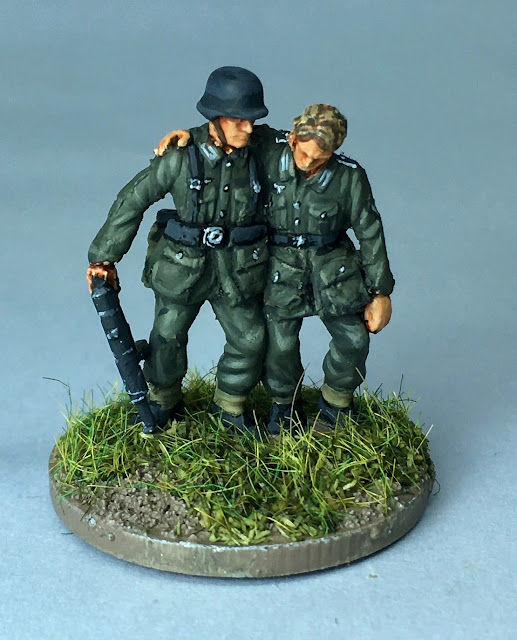 For the 'stunned' wound we've resorted to simply lying the figure on its side. To be honest, I hate this. Why go to all the trouble of painting and basing a figure to look vaguely realistic only to have him tipped over on his side like a plastic army man in a kids' game of toy soldiers?


For the light wounds I've used a plastic skull token. While a little less offensive than tipping a figure over they don't blend in well with the table. 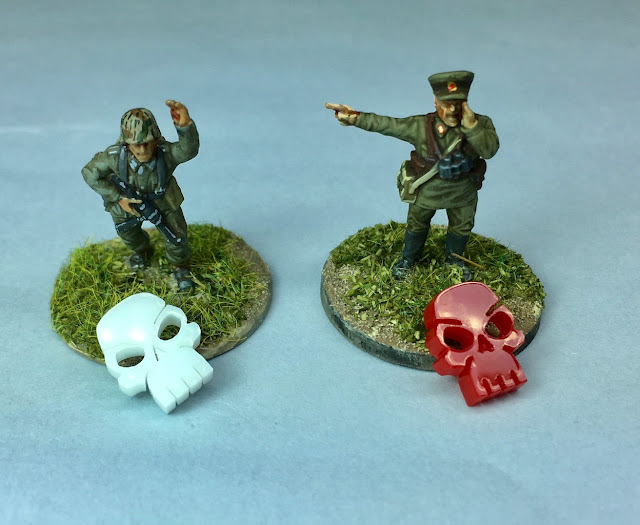 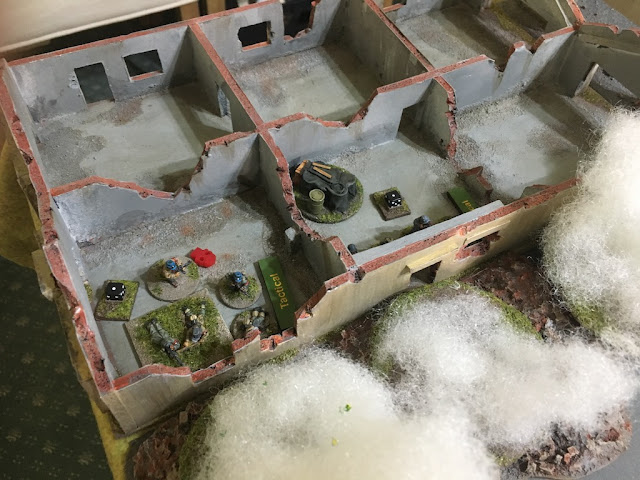 It was only when I was making up my units for Sharp Practice that I stumbled on the single figure sabot bases that have room for labels or markings (these came from Supreme Littleness Designs and you can see how I created those in this post). They worked very well for my leaders in Sharp Practice and so gave me an idea for Chain of Command. 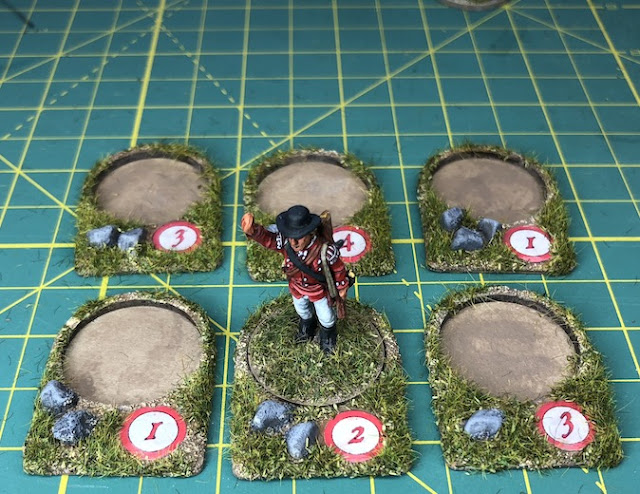 I base my junior leaders on 20mm round bases and so I started with the sabot and looked at options using my skull token or a printed label. 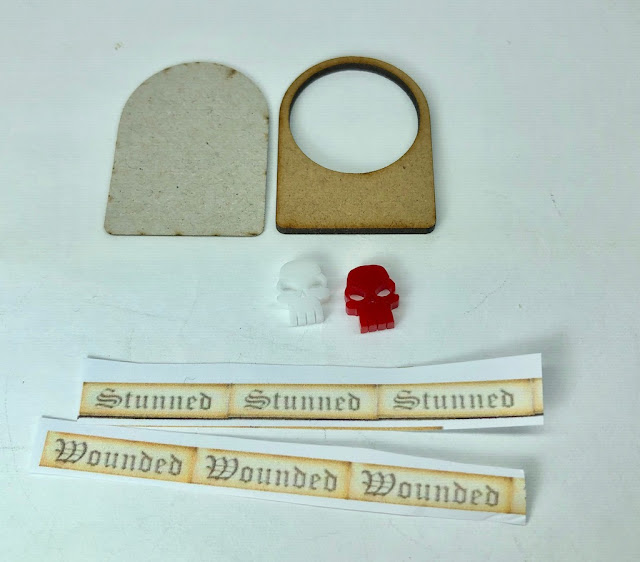 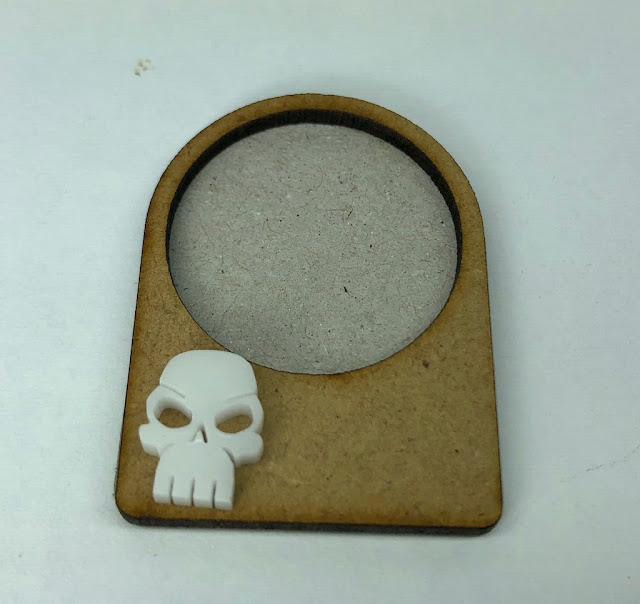 The idea being they can be used for any junior leader of any nationality who will be slotted into the base whenever they are wounded. Easy to keep them together and so keep track of the leader's condition. 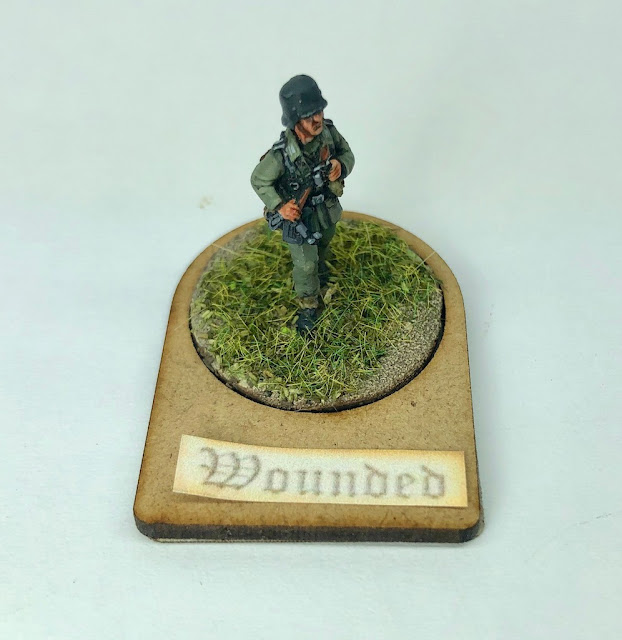 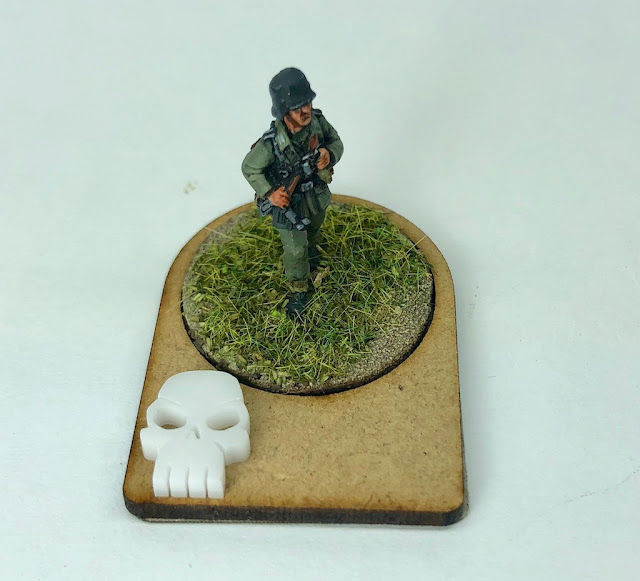 Then it was simply a matter of making up the base, texturing and painting. 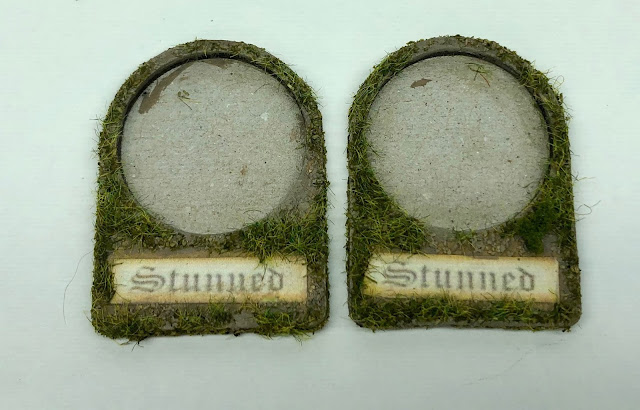 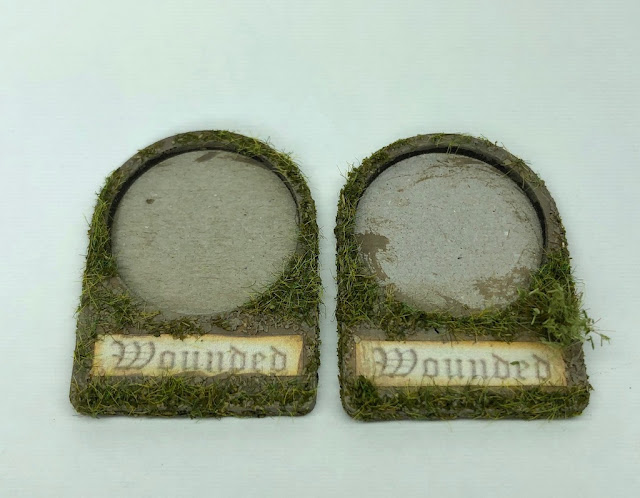 As an alternative to the 'wounded' label I thought I'd also try them with a skull token just to add a little more differentiation between the two types of bases. 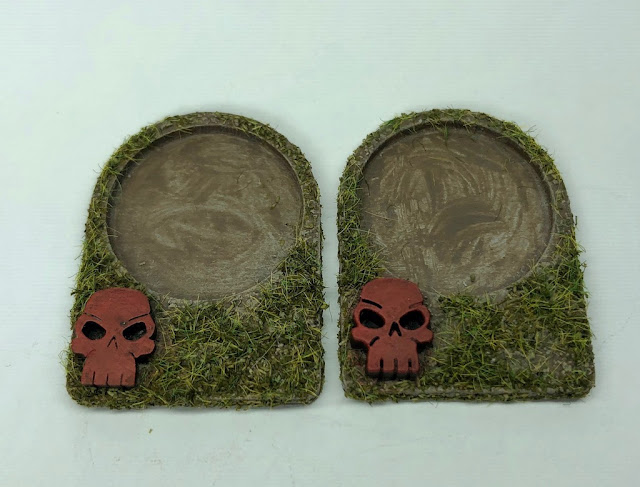 Once wounded with a light wound the leader will stay on the base for the remainder of the game (assuming he lives that long!).

The leader can be removed from the 'Stunned' base at the turn end and return to his normal state. 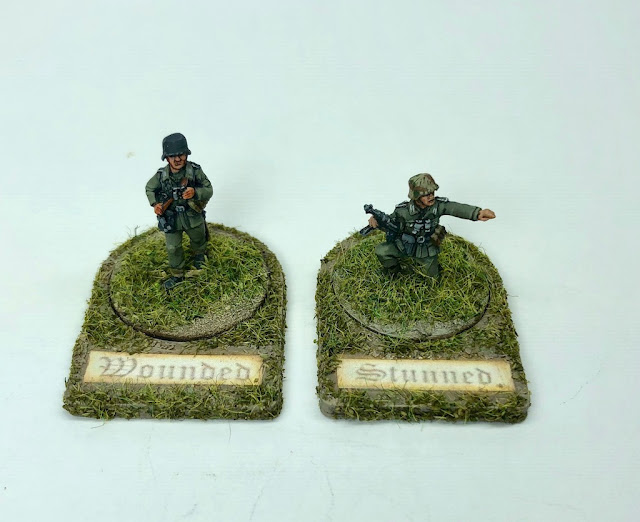 I have plenty of skull tokens so I also made a few markers on 20mm round bases to give some alternatives or when space in a particular piece of terrain is tight. I also think that once the skull tokens are painted and lose their shiny plastic look they become a lot less intrusive. 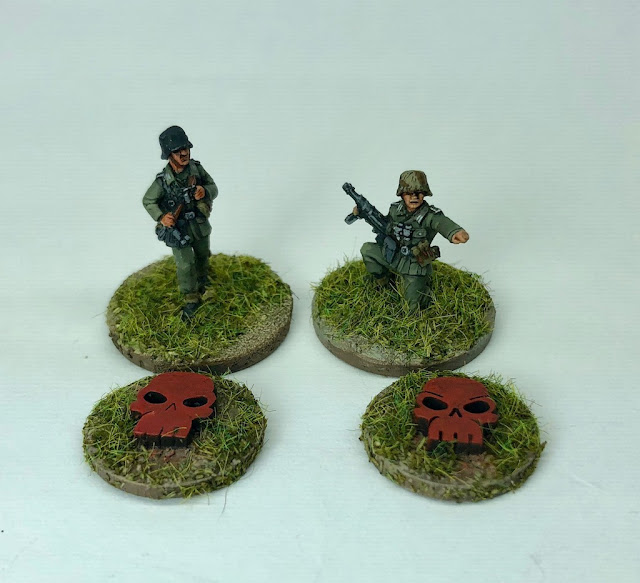 I base my senior leaders on 20x40mm rectangles and so the sabot bases were not going to work for this less conventional size. So in their case I've made different markers to match these larger bases but kept with the same theme. 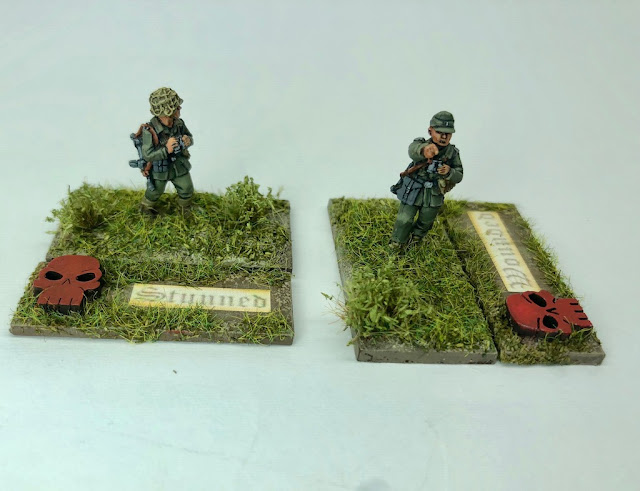 For a senior leader who suffers a second wound I've simply doubled up on the skull tokens. 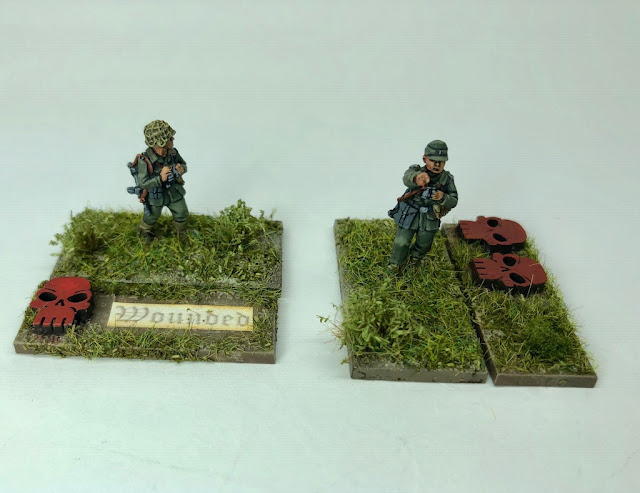 If these markers are a little too obtrusive I've also made up a 20mm round base with two skull tokens. 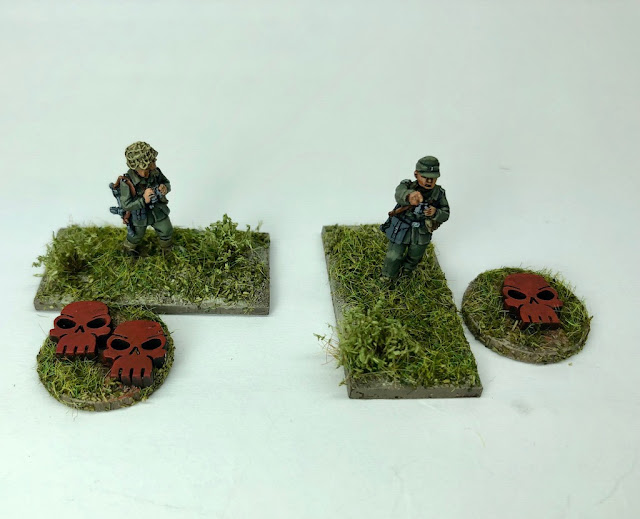 With some recently painted German casualty figures I can now track the full life cycle of my German senior leaders in miniature. 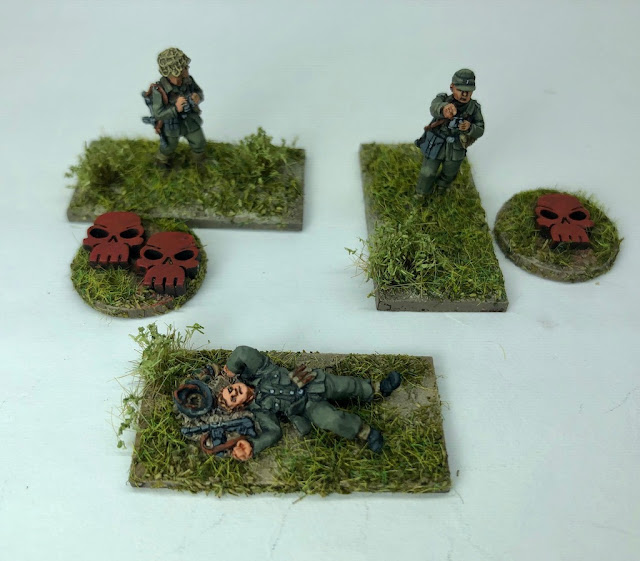 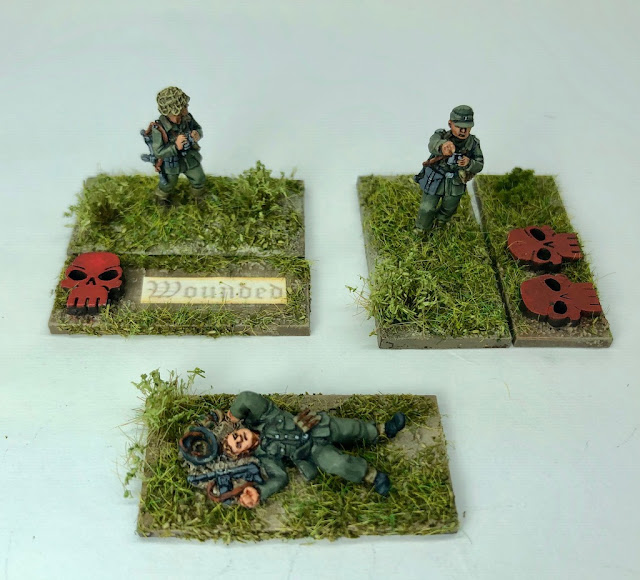 Talking of casualty figures, I've decided I should add these to my collection mainly for the photos in the AARs. Too many times I've recorded the elimination of a team only to have a photograph of the empty piece of terrain that they once inhabited. That doesn't really tell the story very well and so the addition of a few casualty figures should help to fill out the narrative.

These German casualties are from AB Figures and are up to their usual high standard. 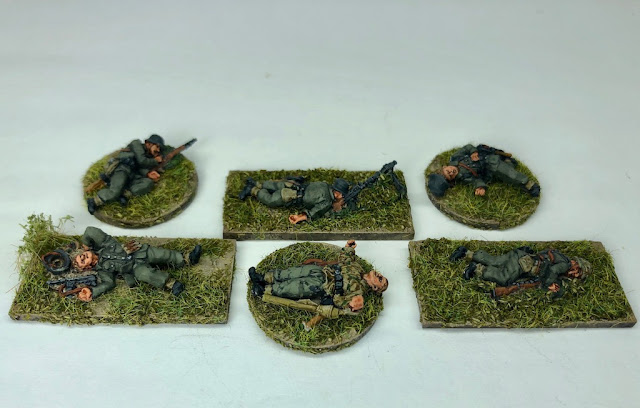 I've based them to give a few options. Firstly individual figures can represent small teams that have been wiped out or to show some losses to a squad. In the case below I can represent the remains of a failed ambush attempt by a panzerfaust team. 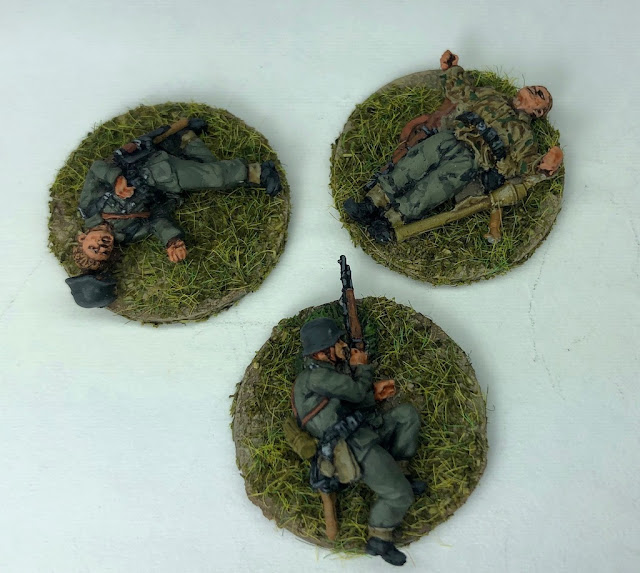 There are key events that often need illustrating such as the loss of an entire LMG team. I base my LMG teams with two figures on a 40x40mm base and then the third member individually. For the casualties I have based the gunner and crew member on separate 40x20 bases so that I can use them separately or together to show the loss of the team. 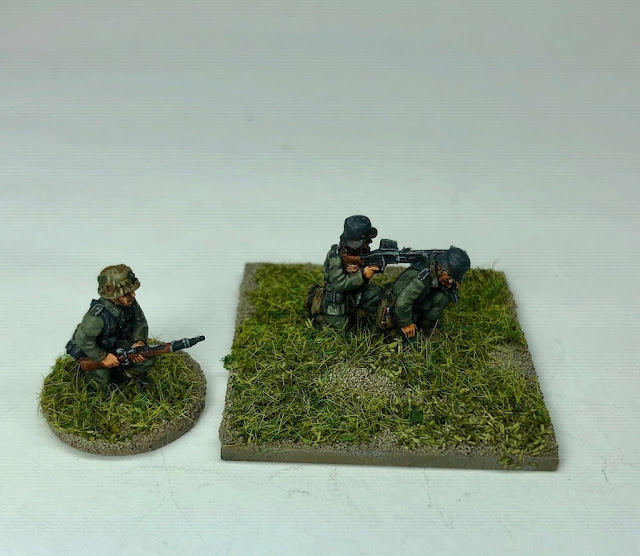 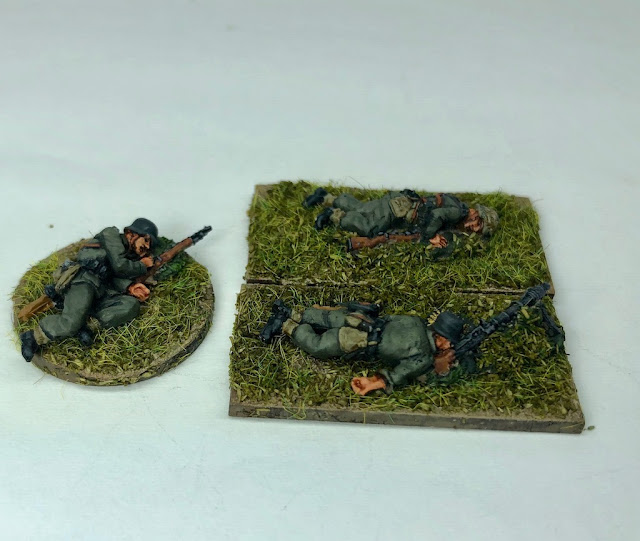 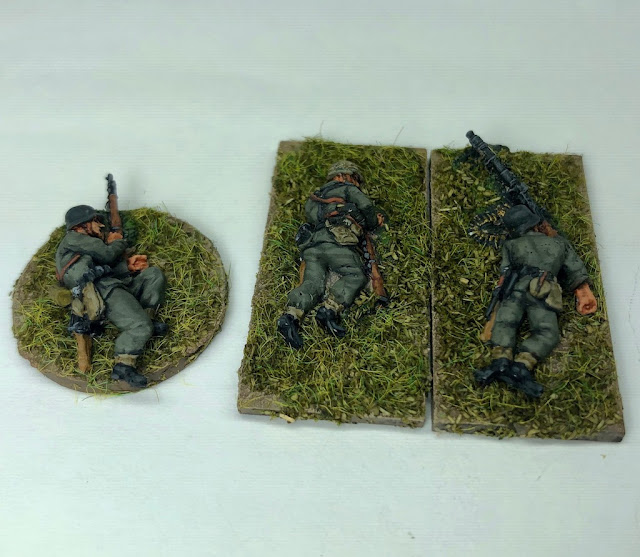 I've also added a few American casualties. These are from Wartime Miniatures but they only offer two poses, so I will no doubt order the AB American casualty set of six individual poses at some stage. 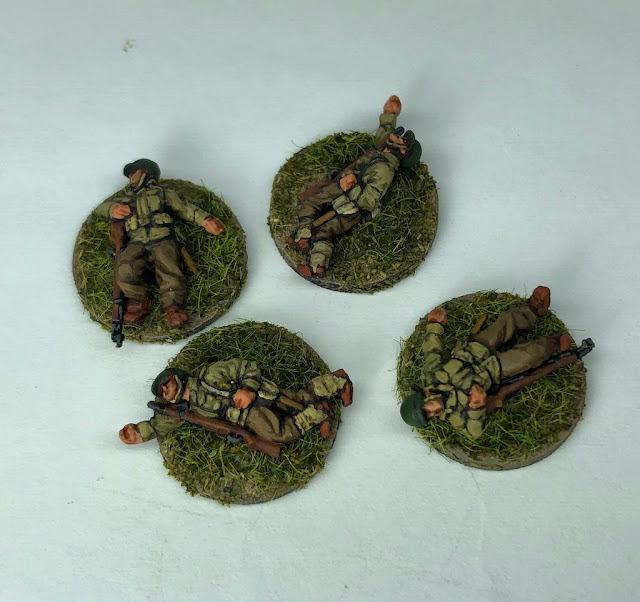 Email ThisBlogThis!Share to TwitterShare to FacebookShare to Pinterest
Labels: Chain of Command