Wounded leaders for Chain of Command

I've been trying to think of a way to show wounded leaders without cluttering up the table with markers.  Up until now I have been doing just that, I have been using some acrylic, skull tokens from Litko. The problem is that the light wound that reduces a leader's command initiative by one level is a wound that could last the entire scenario (unless you have a medical orderly who can patch the leader up, of course), so I wanted a solution that reduced clutter, but was easy to notice on the table.

The Plastic Soldier Company Late War German Infantry set comes with some spare heads and each sprue includes a bare head with a bandaged wound.  The PSC Late War British Infantry also includes one bare head.  It's unbandaged, but would work just as well as I plan to have all wounded figures without helmets.  These can be used for any nationality and so I've tried some simple head swap conversions with my Russian, German and British junior leaders.  The first batch of figures will be used to represent Junior Leaders who have been wounded and will operate at one less Command Initiative for the remainder for the scenario.


So after a few straightforward head conversions I've come up with this for lightly wounded junior leaders: 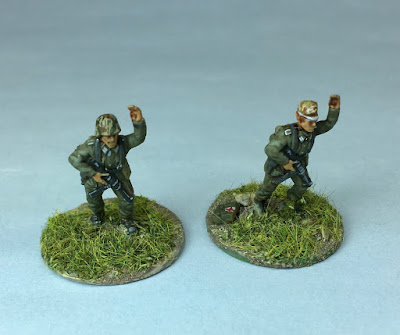 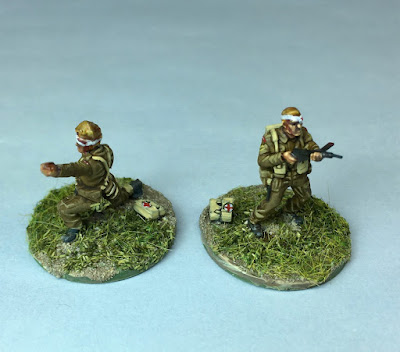 And a Russian Junior Leader with head wound: 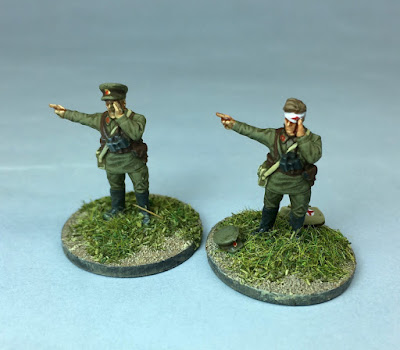 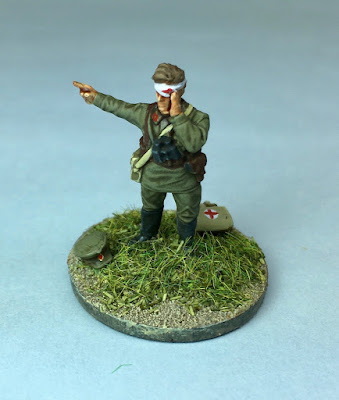 I'm trying to think of a way to show those leaders whose wound stuns them for the remainder of the current turn and I'm trialling something using a British casualty figure from the PSC set.  Two thoughts, one simply the leader lying prone on his base: 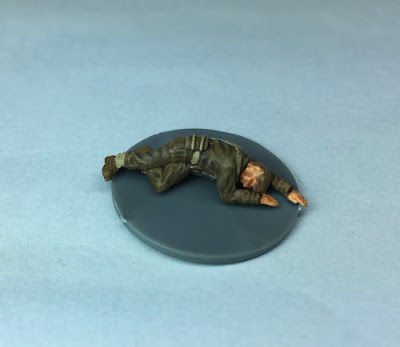 The other option is to go for something a little more scenic and add someone tending to him.  A bit confusing if I have a medical orderly as a support, but if they are all on the same base I will know what's supposed to be represented.  I'm leaning towards something along the lines of below.  These two are on my standard 25mm diameter base for Junior Leaders but it may work better on a 30mm base.  As this will look so different from any other figures I'm not concerned it will be confusing: 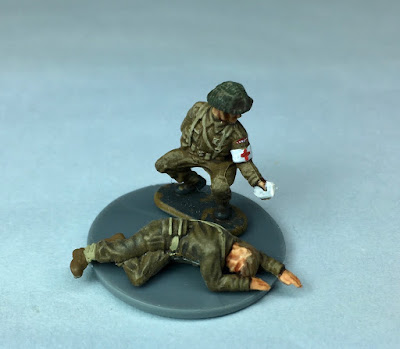 You can see how I made the figures pictured below for the wounded leaders who are stunned in this post Wounded Leaders Part 2. 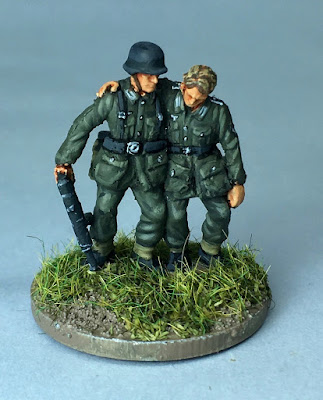 I haven't thought about senior leaders yet, as they can progress through two levels of light wounds and I don't really want to create that many extra senior leaders (best solution of course is not to let my senior leaders get shot at.....).  I'm going to have to think about that one.

I did think of a Pythonesque solution, straight out of the Holy Grail film, which is to have them getting increasingly debilitating wounds.  Not quite chopped off limbs ("it's just a scratch"), but something along those lines.  A solution in severe danger of getting comical I suspect.
Posted by The Tactical Painter at 14:50