The Eureka Australians are now finished and based.  All up, including the set with slouch hats, I have enough for five sections, which gives me more than enough for Chain of Command.  I still need to add a few support units, but this is the core platoon done.  Given I wasn't totally happy with some of the figures in helmets I've mixed up figures from both sets - helmeted and slouch hats. Looking at period photographs this practice seems to be quite common with Australian units, so I will let that be my excuse.  The full range of Eureka Australians are here Eureka Miniatures 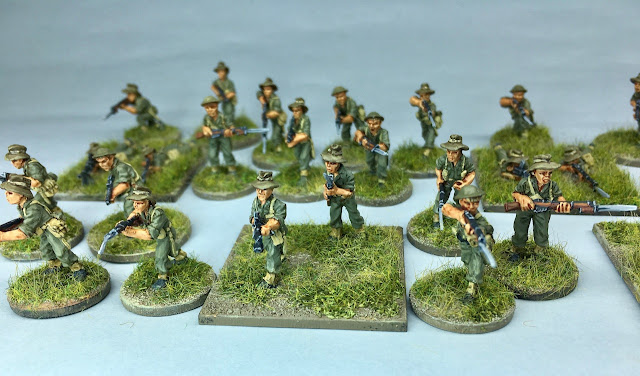 Eureka make two sets of Australians, one lot with helmets and the other with slouch hats. While the body poses are the same, the heads and headgear are different. As you may have gathered from earlier posts, I'm not so enamoured of the helmet set which has some strange proportions - mainly large heads, grotesque and caricatured features and small helmets.  Not all figures, but some. It really is amazing what a relatively small difference in a face or the angle of a head can make to the overall look of a figure.  I've tried to show this in the following pictures.

Take the two figures above.  I really like the one on the right, to me he's thinking about taking a shot and looking for targets or the result of his previous shot.  Figure on the left could be doing the same but he's looking down, why?  At first I thought he was supposed to be bayoneting someone but the pose isn't quite right for that.  Aside from the big head issue, it's unclear what he's doing, while the figure on the right not only has the right proportions his pose is easier to understand.  My wife just walked past and said, 'they look like little munchkin men'.  Speaks volumes about that big head issue! 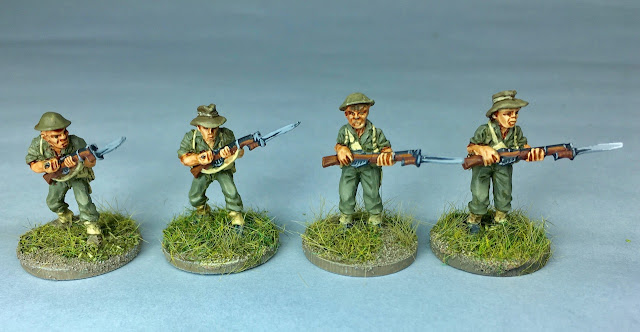 Overall I'm pleased with how these have come out.  They work well as a unit.  They all look good after a lick of paint and the worst offenders will be assigned, ahem, 'other duties'.

Last, but not least a Vickers MG as a support choice: 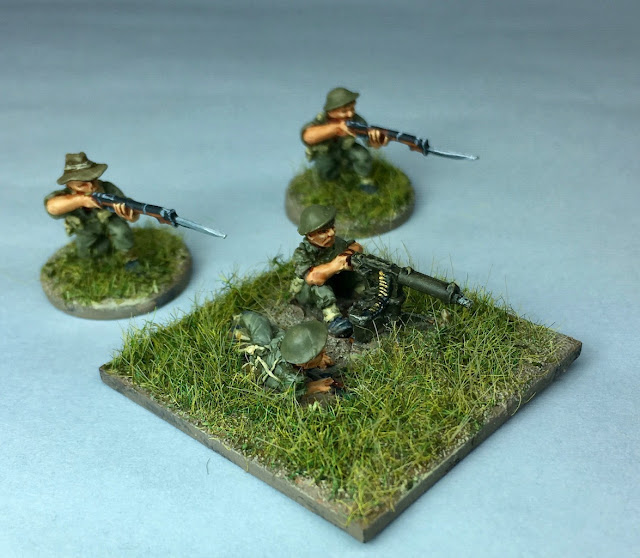 Posted by The Tactical Painter at 13:32