We now reach Scenario 2 'Clear the Way' in the Storming the Citadel campaign. This one bears a lot of similarity to Scenario 1 and reflects some of the preliminary sparring on 4 July 1943 prior to the launch of Operation Citadel the following day. This time we see the Germans probing the Russian minefields in the hope of neutralising a number of them to make things easier for the main assault. If you followed the first scenario (Scenario 1 'Eyes Down') you will know the terrain here is very similar, as is the mission itself. My experience last time was far from pleasant and I didn't like the prospect of trying to tackle a formidable force of entrenched Russians across open ground. 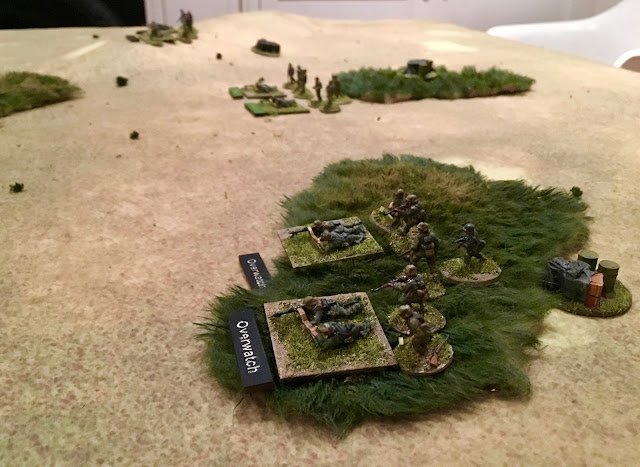 My lesson though is to perhaps fear casualties a little less than I should. After all, it is the Russians who must carefully husband their one platoon through five scenarios. While I don't want to be wasteful with what I have, I do have three platoons and as the attacker I should expect to take some pain if I want to make progress. My thoughts for this scenario are that I should worry less about having my engineers clearing mines and focus more on how I can suppress the Russian platoon, or even better, just drive them from the table. So the plan is simple - deploy all of the platoon quickly and have them ready for the appearance of the Russians. Then, using fire and covering fire, see what I can do to make the ground easier for my engineers. I see no hurry bringing them on, they can only serve as easy targets.


The roll for Force Morale saw the Germans off to a good start with FM10 to the Russian FM8. We both had support rolls of 1, so I brought in an Engineer Demolition Team with a Goliath. While it's a one-shot-wonder, it will take out a minefield on a roll of 2-6, much better odds than a mine clearing team which will need a 6 to do the same.


The Russians must use the same platoon from the first scenario, but they are down two men, one permanently and one wounded (who will return for scenario 3). I have the option to draw on any one of the three available German platoons and so I opt to bring in a fresh one for this scenario.


The patrol phase was fairly predictable given we both know where the minefields were likely to be and there was simply no easy way around this for the Germans. With the patrol phase finished Dave sets out his minefields. He has one large area of six fields and a smaller one of two. Of these eight, two will be dummy minefields, but I see little point trying to guess which ones they might be. 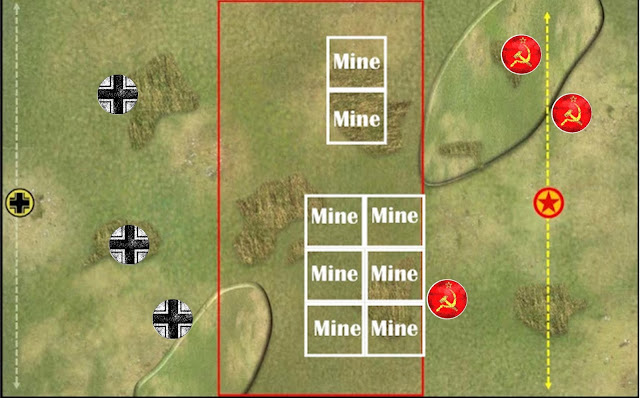 Holding the initiative I took the opening phase. To increase the odds of accomplishing all I wanted to do early in the scenario I elected to use one of my four additional command dice. I see no reason to hold on to these in this instance and so I felt justified when I rolled a very useful set of command dice that gave me the options I wanted. I was able to to deploy all three squads onto the table as I had planned, putting two on Overwatch and one Tactical ready to move into a patch of rough ground near the largest minefield.


Now I wait to see how the Russians will respond. Well, Dave had decided that what had worked so well last scenario could work again, and his command dice allowed him to deploy three of his squads.  This time only one of these was entrenched, so this made for a slightly less ominous force than last scenario. They all dutifully poured fire onto the squad on the hill on my right flank. I took two casualties and 6 points of shock. The squad Obergefreiter (JL) dodged any hits, but this could be turning into a repeat of the last scenario if I'm not careful.


My two squads on Overwatch return fire, both targeting his squad on the hill to my left, which was already down one man killed from the previous scenario. The Russians take one casualty and some shock.

Knowing the next few phases could be critical I elected to use the second of my additional command dice and this paid off handsomely. I rolled a double phase, plus some very useful command dice. This was my chance to try to hit the Russians as hard as I could. My roll included a four, so I decided to bring on the Unterfeldwebel (SL). While this would make it a little harder to get my engineers on the table, I thought it more important to have the big man on the table to ensure I maximise my double phase.

I deployed him so that he was attached to the squad on the hill that was carrying six points of shock, but in command range of the middle squad. In this instance the command dice would allow me to activate all three squads without needing the help of the Unterfeldwebel, which meant all of his 3 CI were spent taking shock off the squad. I activated the Obergefreiter with the squad on the hill, removed another point of shock with 1CI and then activated the whole squad to return fire with the other. With the remaining command dice I had the other two squads activate and also fire at the same target. I have six LMGs firing at this one target and they dish out a lot of pain - the Russians take four casualties and they accumulate eight points of shock. Luckily for him the squad Serzhant avoids taking a hit, but with only three men remaining, the squad breaks, falls back in disarray and sees Russian FM fall to six. 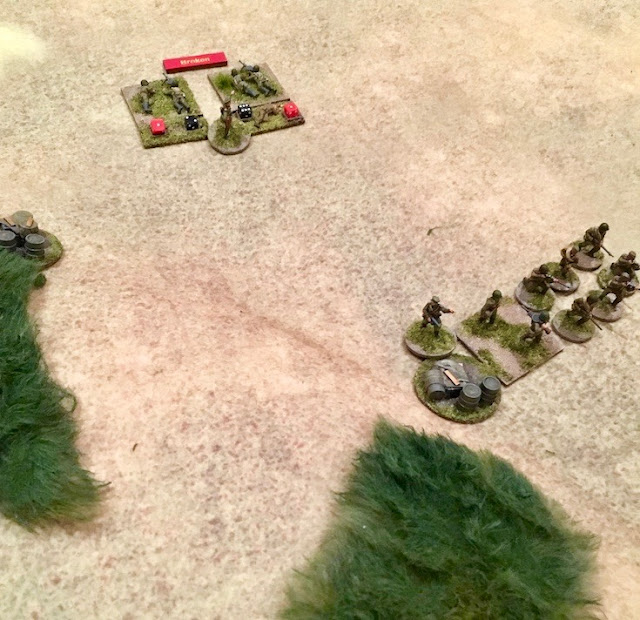 That's one Russian squad dealt with and I have another phase to come. The following phase I choose to use the third of my additional command dice to make sure I can make the most of this opportunity.  I roll three 1s but it doesn't matter, with six dice I have options that allow me to activate all three squads once again. We now turn our attention to the other two Russian squads. Two German squads target the Russians entrenched behind the large minefield and even though they are in hard cover they take three casualties, one of which wounds the Serzhant and Russian FM drops to five. That's seven casualties that the Russians have taken so far, plus the wounded Serzhant. The fire on the Russian squad behind the hill inflicts a further two casualties and some shock. All up that brings Russians casualties to nine.

Well, that proved a devastating double phase and Dave really has to consider whether he wants to hang around much longer. This platoon has to fight for three more scenarios and with one man killed from the last scenario plus the four he will lose permanently from the current casualties, he has to evaluate what is to be gained from continuing to fight. He has gained the pre-game barrage by winning the first scenario, but if he withdraws now he loses the benefit of two minefields for the next.

I think he makes the right decision when he decides to withdraw and save his platoon for the tougher fighting that is to come.

With a scenario victory and a difference in FM of three in the Germans' favour, my two casualties are patched up and return to the platoon. The Russians will lose four men permanently, three return immediately and two return the next day (which is the next scenario anyway, so those five will all be available). All up the Russian platoon is down a net of five men. The CO's opinion is at 0 and so is the Men's opinion. The platoon commander's outlook has dropped to Sad.

The German #2 platoon remains at full strength as does the so far uncommitted #3 platoon. #1 platoon has suffered two permanent casualties. The CO's opinion is 0. The Men's opinion is +1 and the platoon leader's Outlook is Content.

Much like the first scenario this one was decided very quickly and with the benefit of a double phase. Fortunately, all in my favour this time. So with honours even after the first two scenarios we now head into 5 July and the serious fighting commences. I will have to deal with a Russian pre-game barrage, but at least there are two less minefields I'll need to be worried about.

To find out what happened in the following scenario you can read the AAR in this post.


Posted by The Tactical Painter at 15:25