Nothing like a campaign or forthcoming game to spur you on to complete those outstanding terrain and modelling projects. So as we immerse ourselves in Storming the Citadel (Scenario 1 AAR) I've been getting around to all the additional support and terrain pieces I think we might need. This is stage two and you can see what else I've been up to in an earlier post here. You can follow the full campaign and read all the AARs here.

First up is something of an extravagance. Assuming the Germans are making progress in the campaign, by Scenario 5 there will be a situation where the Russians will be attempting to get three carts of wounded men off the table. Should they succeed in getting two off, then they will have some additional men available for Scenario 6. I scratched my head about how to represent the carts, do I just use some sort of marker? No, that would look very average on the table, after all, the carts are the focus of the scenario. Looking around online for what might be available I came across the HaT WWI German Field Wagon set, which very conveniently includes three carts with horses. While they are not exactly Russian Panje wagons, they are not too far off. With the addition of a few HaT Russian tank riders that were left over from another project I think I have a very passable set of Russian wagons to grace the table come Scenario 5. 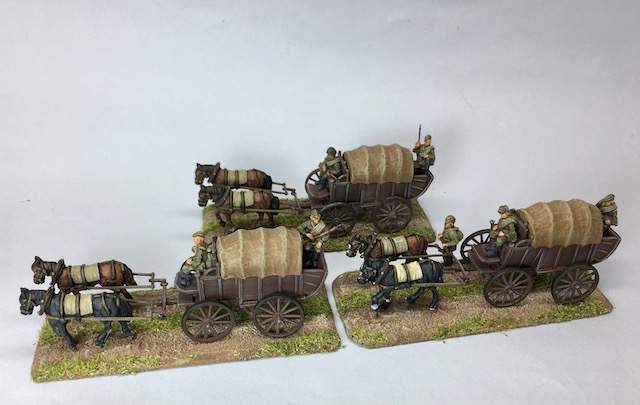 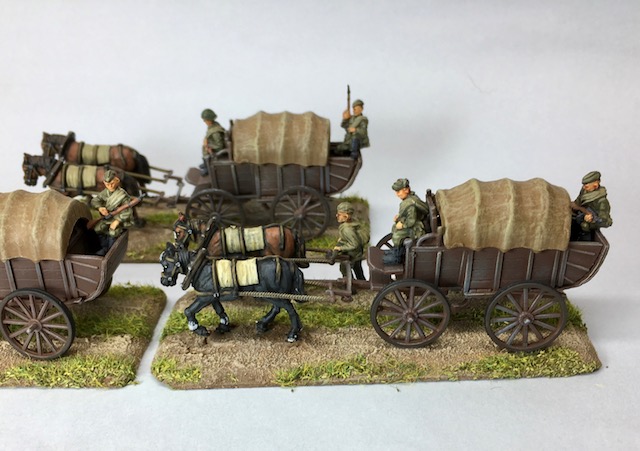 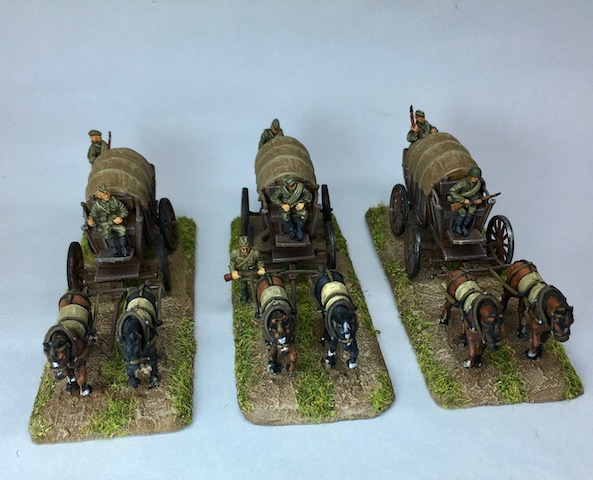 Admittedly the carts are a bit of an indulgence, but I have a feeling I will be able to find other uses for them in the future and they really didn't take that long to paint.

I've also spent time painting and completing some of the vehicles and guns that were in my earlier post Getting Ready for Storming the Citadel. So here is the Tiger (Revell), Panzer IV F2 and the Panzer III Flammpanzer (both from Plastic Soldier Company). 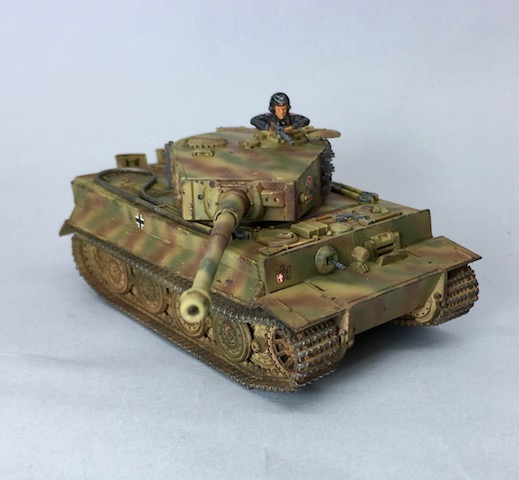 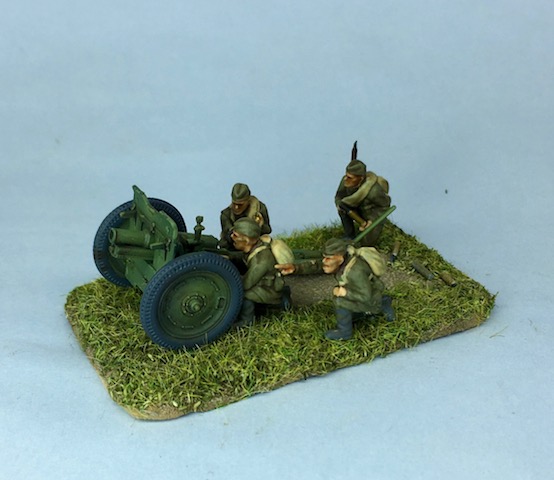 The village featured in the campaign includes a lot of wooden fences. These are the tall type with reasonably close boards like these: 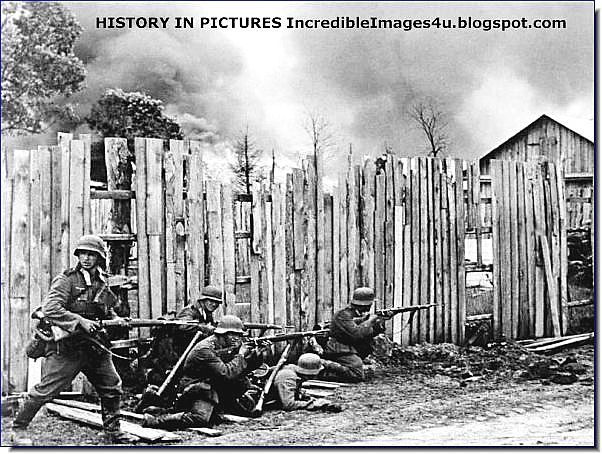 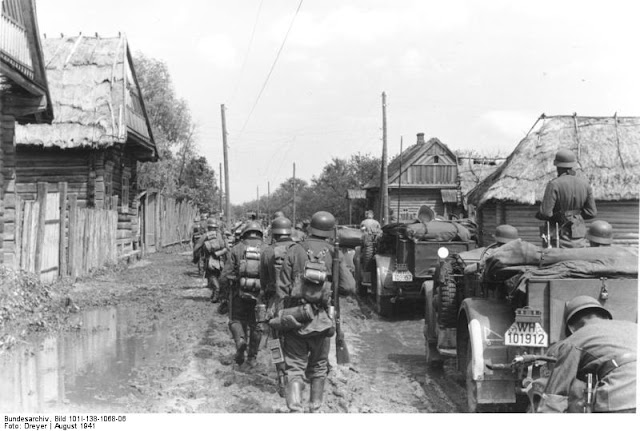 I wanted to create something that would serve as a base for a village house, but I wanted some flexibility on how I could use them. So I started with a base for a single house surrounded by a fence. 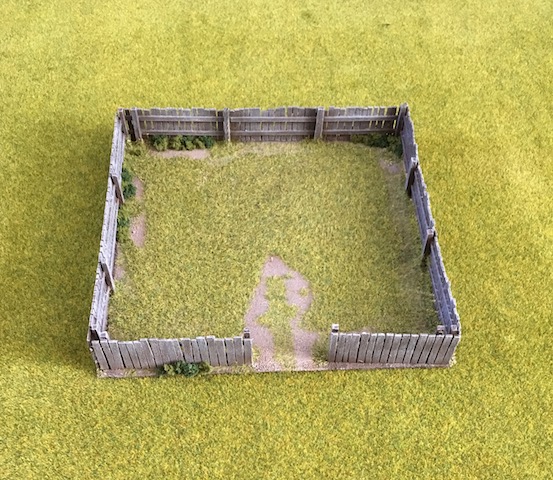 I wanted flexibility on how the actual buildings were placed and so didn't permanently attach one to the base. This allows a house to be placed in a number of ways, or not at all. 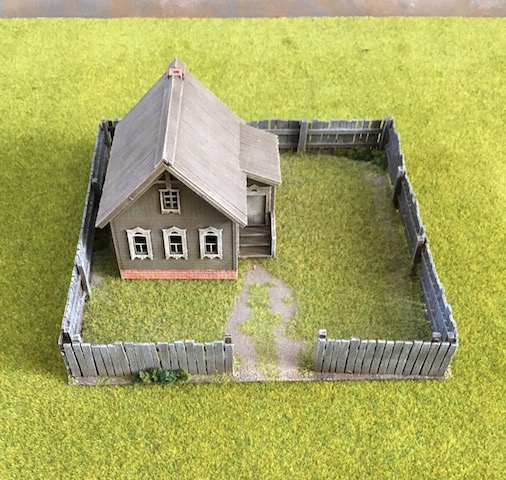 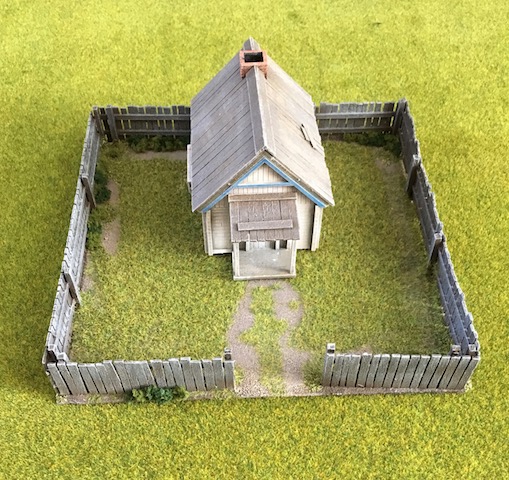 At the same time, as you can see from one of the contemporary pictures, these houses were often adjoining and so the fences form a continuous line.  With that in mind I made another two bases of the same size, but this time I left one side open. 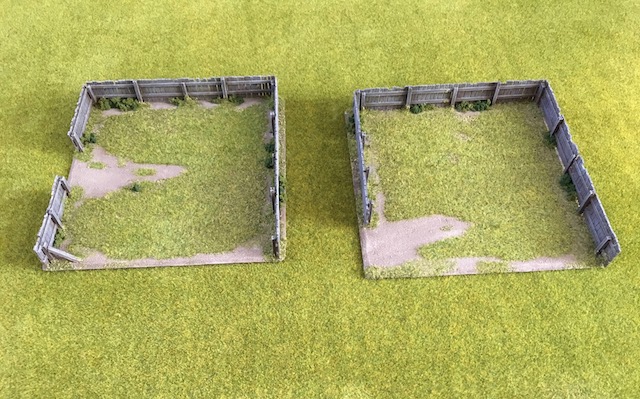 This allows me to join them together without doubling on on the fence lines, like so: 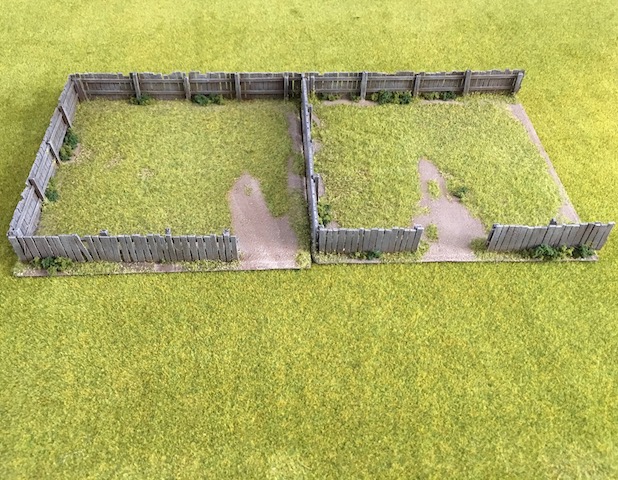 The base with all four sides fenced can then butt up against the open end to make a row of three houses. I also made a fence that could close off one of the open sides should I want a different configuration. 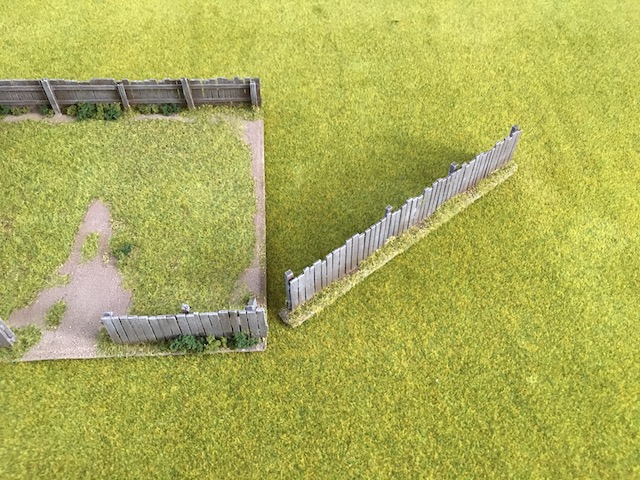 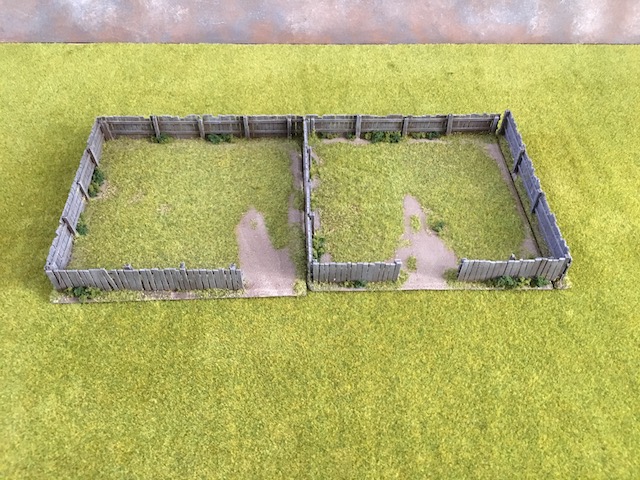 This gives me scope to line three up together. 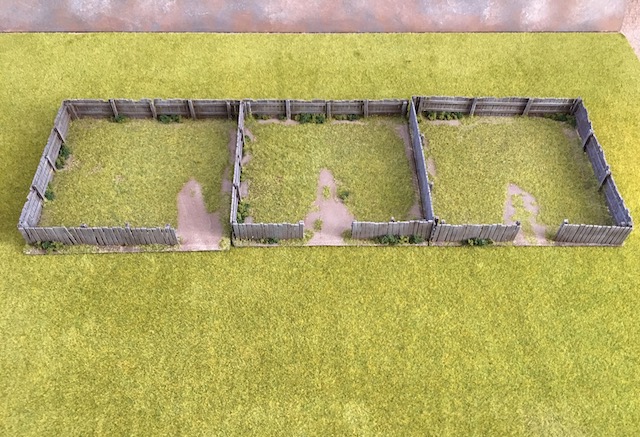 And then with houses: 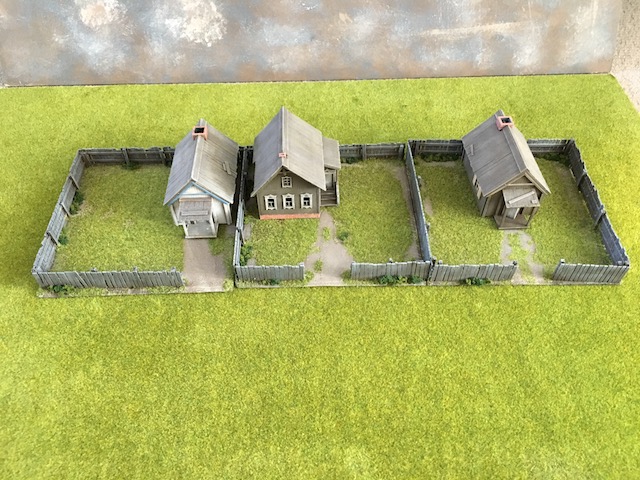 Having the open end on two of the bases allows me to use my other freestanding fences to make for larger areas or different shapes: 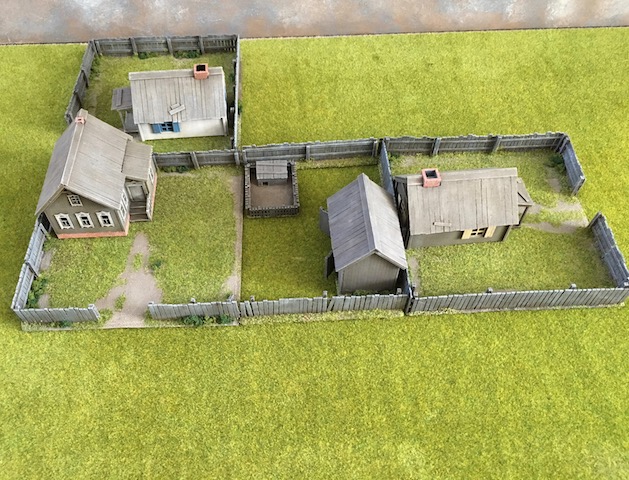 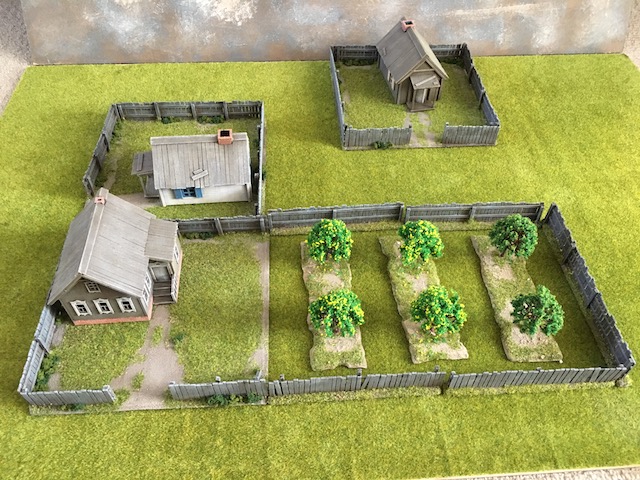 Next up I thought it would be useful to have replacement fences for those that have been breached by vehicles, so I made a couple of those in different sizes. 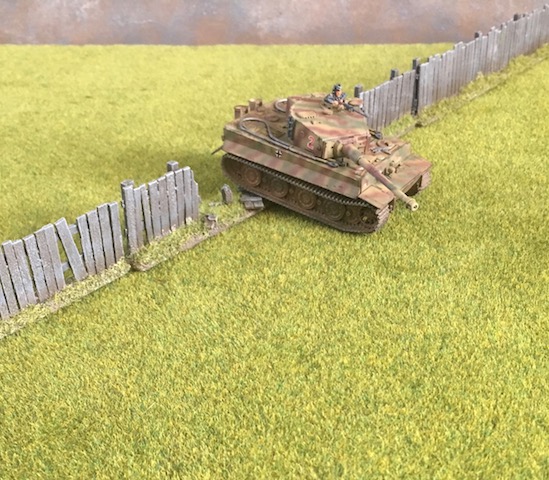 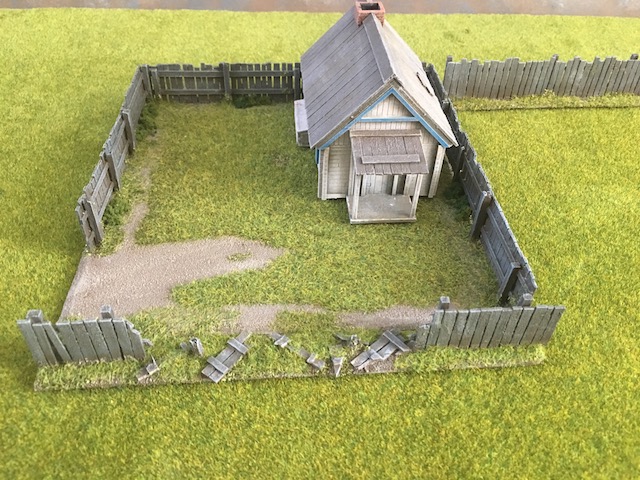 Lastly I also wanted some destroyed wooden houses and based these on a couple of earlier ones I had made using cork floor tiles to scratch build the chimneys. There is nowhere near enough debris around them, but I wanted them to be functional for figure placement, so I'm happy enough with the way they've turned out. 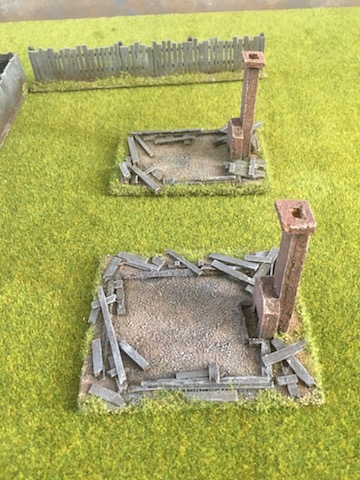 And so for the effect of some HE, or a drive through by a heavy vehicle here's a 'before and after' shot.

So this now gives me nearly all the terrain I need for the rest of the campaign and for future Eastern Front games. My vehicle park for both German and Russian vehicles continues to grow, but why is it, that no matter how many models I manage to complete there are always more that need doing?

To see how they were used in the Storming the Citadel campaign you can read all the AARs on this Page.
Posted by The Tactical Painter at 11:53