Here we go back into another Chain of Command pint-sized campaign, this time on the Eastern Front. I'll be playing Dave once again, my opponent in the Kampfgruppe Von Luck campaign, so we decided to reverse roles for Storming the Citadel. I would attack with the Germans, wielding the firepower of the panzer grenadiers and Dave would try his hand at defending. I've been busy getting things ready for the campaign and you can see some of that here.


This first scenario is a patrol scenario, but with a difference. The outcome will determine who has a pre-game barrage in the third scenario. However it's not solely about achieving a straight scenario victory. The destruction or survival of a Russian observation post (OP) is a key factor. German scenario victory is rewarded with a pre-game barrage for the third scenario, regardless of what happens to the OP. A Russian victory will see them rewarded with the pre-game barrage instead, but only if they can prevent the destruction of their OP. The scenario requires the Russians to place three markers to represent possible locations for the OP and the Germans won't know which is real or which is dummy until a unit is within 6". That effectively limits the option for the Germans to sit at the back of the table and blast the OP into oblivion. This puts the Germans under pressure to be aggressive and search out the real OP.

The question for both sides in this scenario is, how much do you really want that barrage and what price are you prepared to pay? The barrage in the third scenario most benefits the Germans. As the attacker the threat of the Russians having the barrage is not as great, the only thing to be wary of is a Soviet attempt to capture a JoP, otherwise the Germans are not unduly pressured. I think the key for this scenario for the Russians is to deny the barrage to the Germans, but to do that without taking too many losses.

Supports are 1D3 for each side and I start by rolling a 1. I had ideas of bringing in an Sdkfz 251 if I had the full three supports. I reckon Dave wouldn't be expecting German armour and so wouldn't spend his support on an AT weapon and the half track might be quite a powerful unit, but that was not to be. I thought my best support option was the Adjutant. My plan was to try to strike quickly and the Adjutant would allow me to bring my Senior Leader on early. If I couldn't win the scenario I could at least try to destroy the OP and then withdraw.

We started with German FM at 10 and the Russians at 9. Rolling for entry saw us come from diagonally opposed corners of the table. The Russians entered in area 3 and the Germans in area 1. 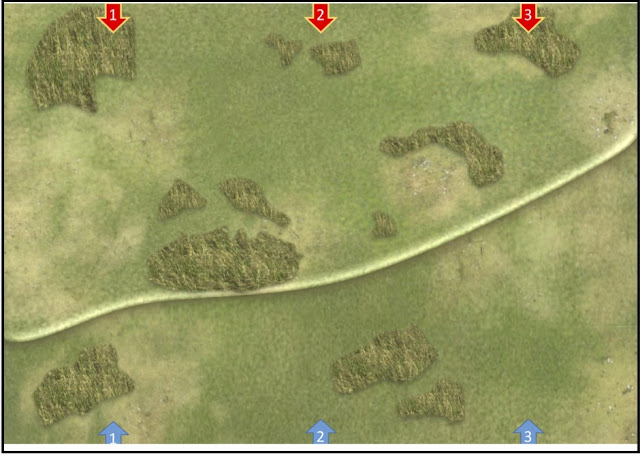 I made good progress with the patrol phase and managed to get a JoP almost in the centre of the table.


Our JoPs ended looking like this with the OP markers placed in obvious spots near the JoPs:


Looking at the setup it wasn't rocket science to guess that OP2 was most likely the real one.  So my plan was fairly straightforward, to have two squads deploy from my forward JoP, ready to lay down fire on the Russians as they appeared and then most likely I'd look at bringing my third squad for a flanking move to the right and for the OP. Keep in mind that to identify the OP I need to get within 6" and until then I can't fire at it. 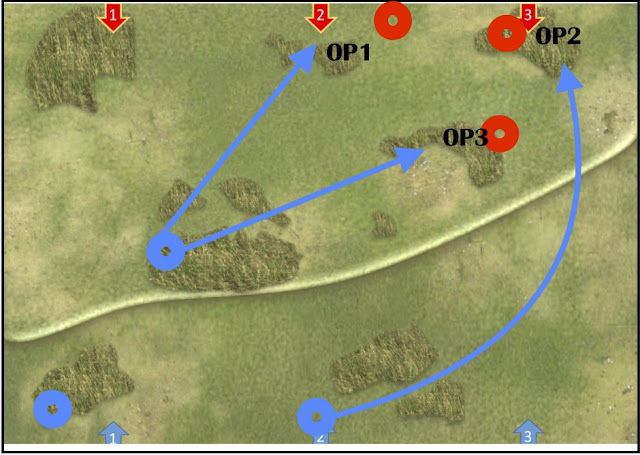 I had the first phase and elected to use one of my extra command dice. I think time is of the essence here, so why not hope for a double phase or start to accumulate CoC points. I don't get the double phase, but I do deploy my first two squads as planned. One goes into the rough ground and takes up an Overwatch position, the other deploys forward from the JoP into the open ground and goes Tactical. 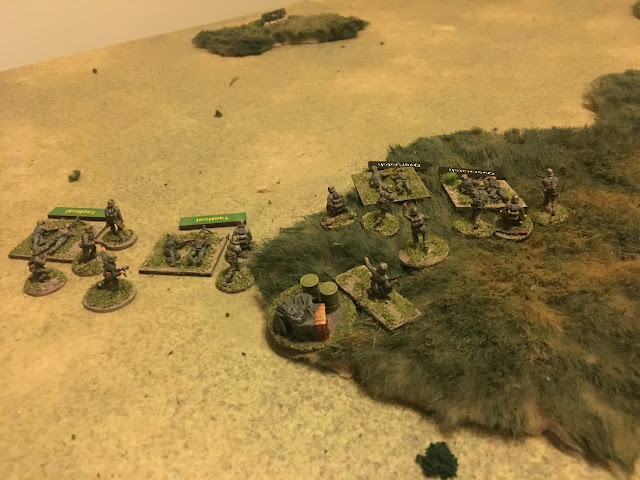 The Russians roll their first command dice of the scenario and get a double phase. Dave deploys two squads opposite me. One LMG squad is entrenched and the rifle squad goes into the rough ground. He opens fire on my squad on Overwatch and inflicts some Shock and I return fire, inflicting a casualty and some shock.

In the subsequent Russian phase Dave deploys another LMG squad, also entrenched, alongside the one already deployed and his fourth squad comes on in another patch of rough ground. His Senior Leader deploys so that he has three squads (the two LMG squads and one rifle squad) all in command range.


He opens fire with everything - that's 55 dice after accounting for shock and casualties. The Germans take three casualties and one of those is the squad leader in the rough ground, who takes a serious wound and German FM drops to 9. If nothing else, my hunch on which OP is the real one is undoubtedly correct, but how am I going to get within 6" of it faced with this horde of Russians? 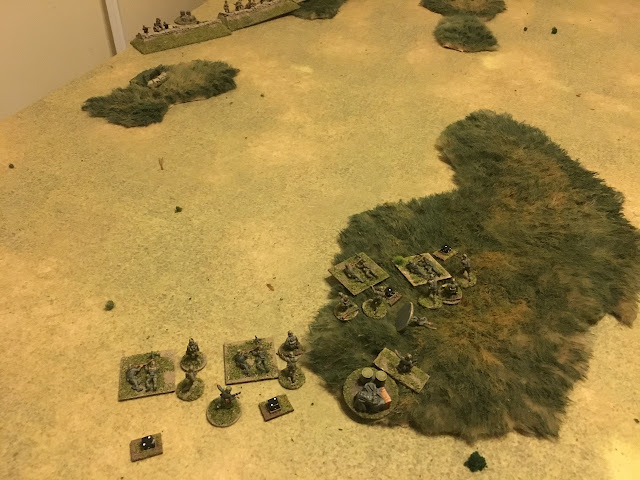 In my phase I bring on my third squad as I need to try to even out the firefight. I return fire, but given the numbers opposite me it's a bit disappointing and leaves a lot of firepower to come back my way.


The next Russian command roll delivers yet another double phase. This is not looking good. I'm faced with a line of four Russian squads, two of which are entrenched, so not only am I outnumbered, they are in better terrain. I have no decent cover, no covered approaches and no opportunities to work around a flank. If I'm going to get to that OP I have to make a frontal assault against a numerically superior force, some of whom are entrenched. This looks more like 1915 than 1943!


So I now take two phases of Russian fire. The first attack is from three squads targeting my squad in the open. It's an attack using 44 dice. That ends up 16 hits, yielding four casualties plus enough shock to pin the squad. One casualty is the senior leader who is lightly wounded and German FM drops to 8. 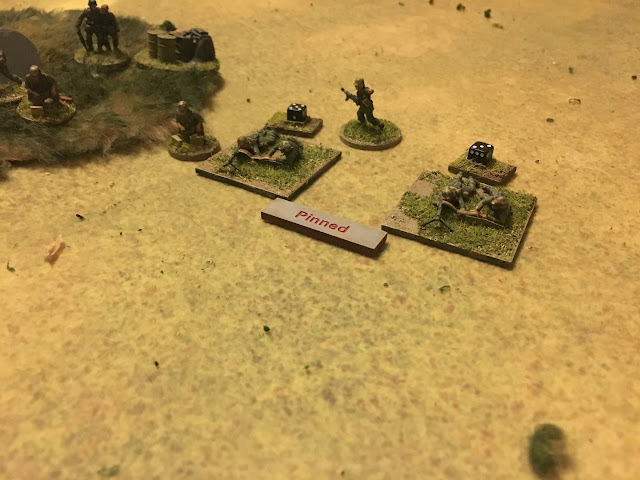 I don't have a CoC die and no one any longer on Overwatch, so I have to face another phase of Russian fire. One downside to rolling a double phase is the limited number of useful command dice, but Dave has his senior leader ideally placed so that on a single roll of 4 he can get three squads to fire. That means in this phase he is comfortably able to find enough command dice to activate the whole Russian platoon to fire. Now that my squad in the open is pinned, it shares the same cover as the adjacent squad, so any fire will be spread across all four teams. Over 50 dice make up this next attack. Mercifully there are only (only!) 16 hits and luckily only one casualty, but a lot of shock, enough to see the squad in the open break and fall back.

Well, I can't see any way to turn this in my favour and it's clear the longer this goes on the worse my casualties will be. If there is any hope of squeezing out a victory it will come at too great a price. So far, I have taken four casualties and that's only because my leaders have absorbed two casualty results and fortunately for me only received wounds. The Russians have taken five casualties, so honours are fairly even in that sense, but otherwise I have to admit that I'm being driven from the field. Letting the Russians have the barrage in scenario 3 isn't a great outcome, but nor is it a disaster. Better I keep my casualties down and save my men for the more important struggle to come and so I make a voluntary withdrawal.

Dave played this perfectly. The OP was set up as far from me as possible and he capitalised on the two early double phases to halt me in my tracks by bringing all available fire to bear. Not only that, his two LMG squads were entrenched, making it a formidable position to assault. It left me with a mountain to climb. I'm not sure having the half track would make that much difference, as getting to within 6" of the OP would have have put it at serious risk of a grenade attack. Of course two consecutive double phases allowed the Russians to deploy maximum force and really lay down a huge amount of firepower. In many ways my casualties could have been considerably worse. Let's chalk this one up to German over-confidence!

I fear this scenario may prove a tough one for the Germans now that they have to get within 6" of an OP marker before it's revealed. Unusually for a patrol scenario the Russians can entrench and so they can protect the real OP from a strong position and the Germans must engage in an uneven firefight if they are to have any hope of reaching it. In our case the Russians had all the advantages - the hidden OP; more support (they rolled better than the Germans and so had level 2 support against the German's level 1); numerical superiority; the ability to be entrenched, and the pure good luck to get a couple of double phases so early in the game. The latter was just the fortune of war and I can live with that, but perhaps allowing the Russians entrenchments now gives them too much of an advantage?

The only counter balance is that the Germans can afford to take casualties at a higher rate than the Russians as they can rotate platoons, so there is an option for the Germans to be more aggressive, but you will need to decide what price you want to pay.

All up it's a minor set back and early days, so let's see if I can have better luck clearing the minefields in the next scenario.

You can read what happened next in Scenario 2 in this AAR.


Posted by The Tactical Painter at 14:05