With my Australian and Japanese platoons complete and after some finishing touches to terrain it was time to get all of these on the table and see how the Pacific plays out in Chain of Command.  Dave, my regular opponent and I were keen to see how the Japanese would play.  They have a very large platoon of 53 men and some national characteristics that look set to make them difficult opponents.  We decided we'd run the game at the regular club meeting and we were joined by Daniel who was keen to give the rules a try.  We put together a scenario set in December 1942 at KB Mission near Milne Bay in New Guinea.  It would be a probe scenario with the Japanese as the attacker. 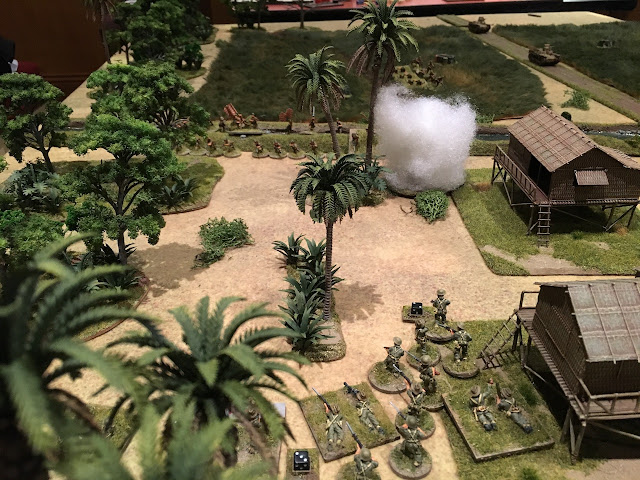 The Japanese brought two Ha Go tanks to Milne Bay and so we included these in the support lists (we also created a house rule for them - if a second one was chosen it came with a senior leader and he could control the two tanks as if they had radios, except they had to be within line of sight and 18", however by doing so, both commanders were considered exposed and therefore eligible sniper targets).  Historically the Australians had left their 2 pounder AT guns back at the airfield.  They brought sticky bombs as anti tank weapons, so aside from the platoon's inherent anti tank rifle, their only support option for dealing with any tanks were the sticky bombs.  The ground was very wet from recent rain and that, combined with a shortage of tools, meant they were unable to entrench and so we didn't allow those in the supports.  The same applied with the 3" mortar support which wasn't available.  The Aussies were going to have to find a way to deal with tough opponents armed only with bullets, bayonets and guts. 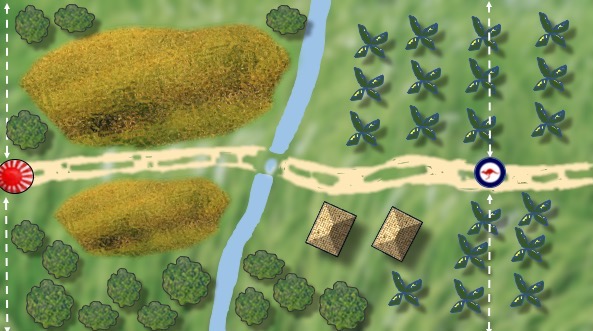 Using Rich Clarke's guide to creating maps using Powerpoint (from one of the Lardie specials), I put together a map and I have to say, I was pretty pleased with the result.

Dave would take Daniel under his wing and play the Japanese and I took the Australians.  I won't write a full AAR but will reflect a bit on how things played out.


The Japanese are able to move 14" in the patrol phase and then deploy 9" from their JoPs.  That makes quite a difference and sees the Japanese turn up quite a way down the table.  I think this is something scenario designers need to take into account when planning terrain.  If you are not careful you can find the Japanese may be able to deploy beyond terrain that you had intended them to have to fight over, or at least manoeuvre through.  I had envisaged the creek as a barrier for the Japanese but we found that it was possible for them to deploy directly over the creek from one JoP.  While this was not enough to break the scenario, it changed its nature.


Len Tracey, who designed the Malaya campaign that appeared in the TFL 2015 Xmas Special, has given the Japanese in 1941-42 a national characteristic called Neo-Bushido.  This allows them to ignore the first two points of shock when calculating its effect (in other words a unit will pin when shock exceeds the number of men by 3 points and a unit will break when shock is equal to double the number of men plus 2).   With sections of 13 men that means it can take a lot to get one pinned or to break.  There was one stage where a Japanese section was carrying 12 points of shock and still wouldn't pin.  Admittedly that amount of shock means even when you discount the first two points, their movement is very limited and their firing much less effective.  I found myself in a prolonged firefight with that one Japanese section, but once it was supported by another section and an MMG I found myself in a bit of bother and was eventually driven back.

It's clear that the best way to deal with the Japanese is the application of a lot of firepower, which is certainly historical, and so for this scenario the Australians really missed the support of a barrage or some other form of HE (later in the campaign 25 pounders were sometimes brought forward for direct support).  In a similar manner the Australians needed to dish out this fire from a strong defensive position and so in this case the entrenchments were also sorely missed.

The Boys anti tank rifle is certainly not much of a threat, even to a Ha Go (and we even played with the optional rule allowing frontal hits on a 4, 5 and 6).  Needless to say the Boys crew didn't last long as their ineffective shots were returned with a blaze of far more potent machine gun fire from the tanks.


The game ended with a Japanese victory. The Australians had not managed to inflict enough loss on the Japanese, whose large numbers meant they could continue to produce enough fire to make a prolonged firefight a bad proposition.  There was also a moment of appalling luck when I deployed a section straight into close combat by bringing them on within 4" of the rear of a hut containing a Japanese MMG crew.  The combat roll would give the Australians 15 dice to the Japanese 4 (one die short of an automatic rout), good enough odds to be certain the MMG crew would come out on the wrong end, but that was not to be.  Needing 5s or 6s to get a kill, I managed to roll one 6 from 15 dice (that's right, just one, the rest were low numbers of 4 or less) and the Japanese rolled three 6s from 4 dice (with the remaining die a lowly 2).  On an average roll I should have expected 5 kills (enough to wipe out the entire MMG crew), so much for my tough Aussies, who were sent scampering back licking their wounds.

Despite the loss I enjoyed the game and was happy with the way the terrain worked.  There are some definite nuances to playing with and against the Japanese, but there's no doubt they make for a challenging game.

Posted by The Tactical Painter at 16:04