A Long Time Ago in a Land Far, Far Away

It's okay, relax, I'm not getting into Star Wars, this post's subject matter is purely historical. In fact it's more personal than that, it's a little piece of my own history. 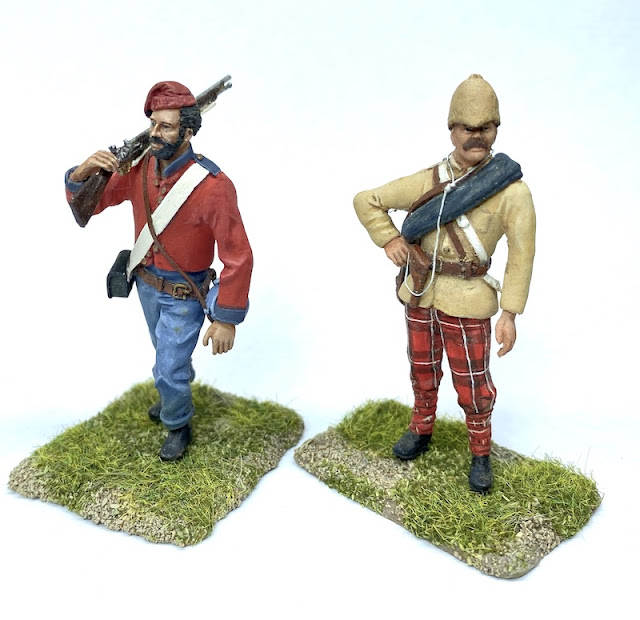 The other day I was sorting through boxes and came across two 54mm (1/32) figures that I had made in the late 80s/early 90s. I've moved countries and houses several times in the intervening years so I thought they had long disappeared and was delighted to rediscover them. They have a bit of a story behind them. 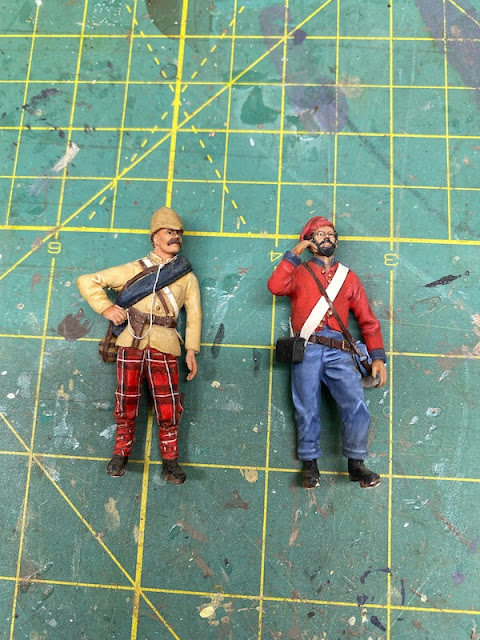 I was living in London at the time and wasn't doing any miniature gaming. I had two very young children and what little hobby time I had was taken up painting the odd, one-off 54mm or larger scale figure. Any gaming time I could squeeze in was confined to hex and counter games.

I had developed a fairly big interest in the Victorian colonial period and was drawn to painting figures of British soldiers fighting in obscure campaigns in far flung parts of the globe. Much inspiration came, as it often does, from Osprey books. In particular I had a handful that covered the British Army on campaign during the 19th century and they were chock full of lovely ideas. 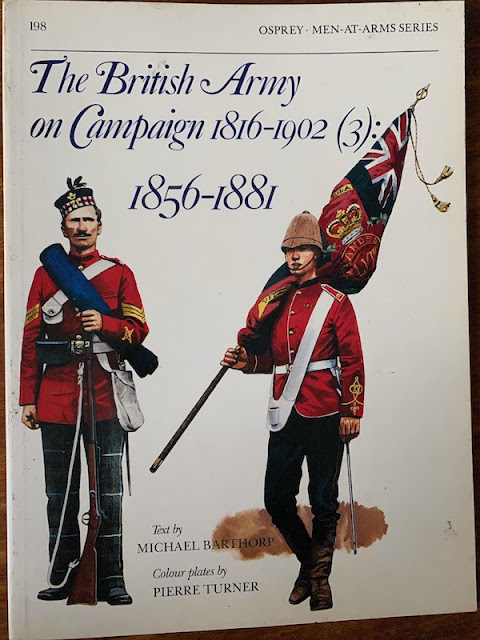 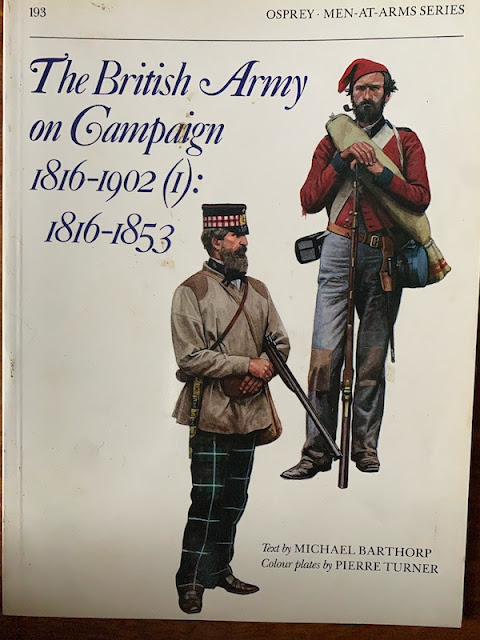 A couple of images in particular had grabbed my attention. One was an officer from the 72nd Highlanders during the Second Anglo-Afghan War. I particularly liked the the contrast between his decorative tartan trousers and the more muted khaki jacket and helmet cover. It was like a nod to the future with an acknowledgement of the past. 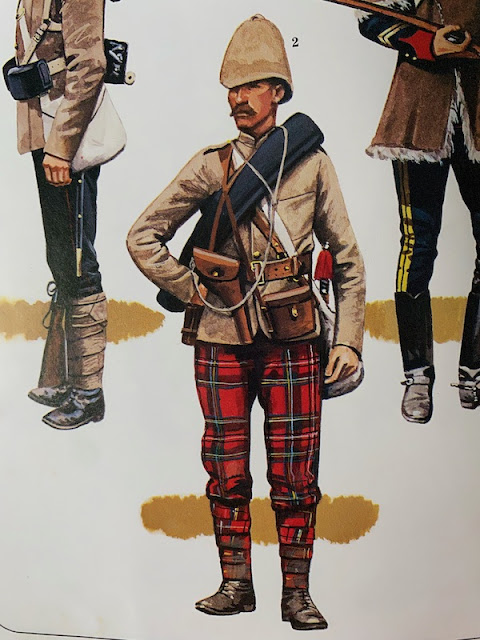 I was also drawn to the worn look of this private from the 2nd Foot in South Africa in 1851 who certainly appears like he's been on campaign for some time. 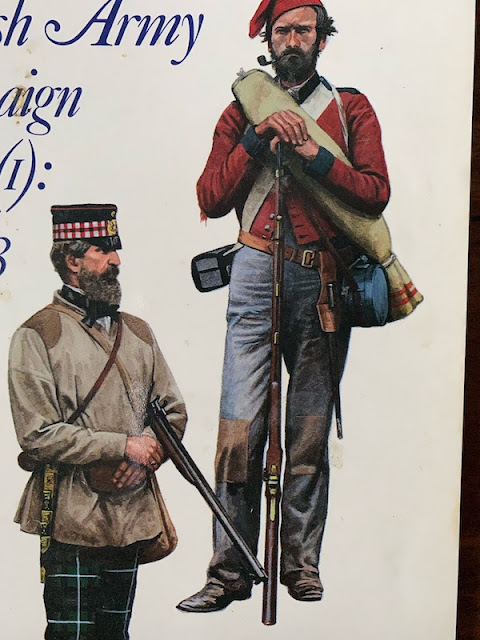 I decided to have a go at making them by converting Airfix 54mm (1/32) multipose plastic figures. I had a box of their US Marines with several unused figures and decided they could work well as the basis for the conversions. 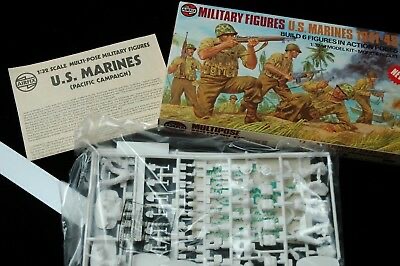 They are not an obvious choice but I had them to hand and could see the potential. I remember these figures when they first came out in the early 70s and had made up many when I was at school. They were a lovely set at the time, that allowed for a lot of creativity. 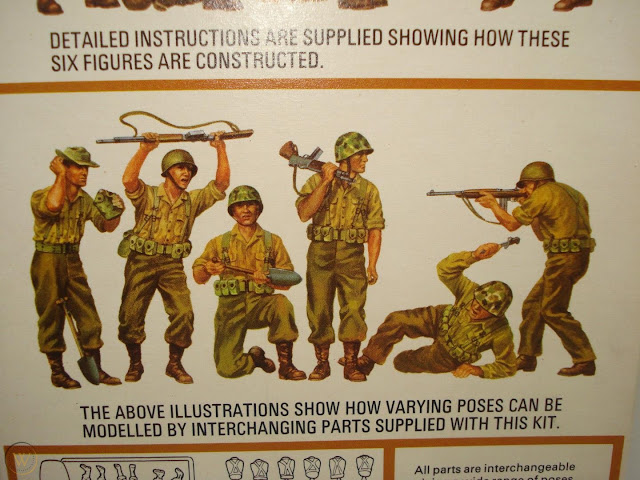 I also drew on another Airfix figure for some of the period accoutrements. Not sure the Brown Bess is exactly right for 1851, but it was the closest thing I had and a Browning Automatic Rifle certainly wasn't going to do the trick. 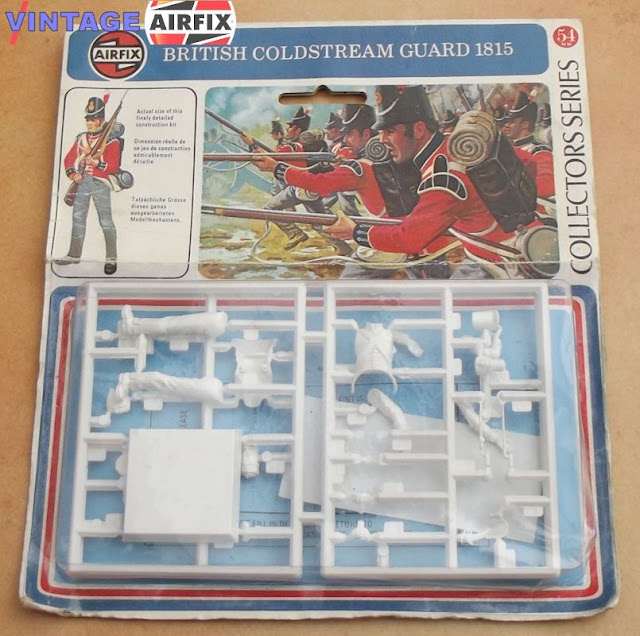 Needless to say, I don't have any work in progress images. Well, back then who would have imagined a cordless phone that could slip into your back pocket with a built in camera and an instant connection to the internet? Sorry, to the interwhat?
Considering they've been badly stored in a shoebox for a few decades the two figures were in reasonably good shape. They had been based originally on small wooden plinths but I've no idea when they became separated from those and where they could be now. I dusted the figures down as best I could and touched up the odd bit of chipped paint. I've mounted them on a few spare bases left over from a gaming project.

Milliput was the sculpting material and that was used to make things like the hair, beard and items of clothing such as headwear. 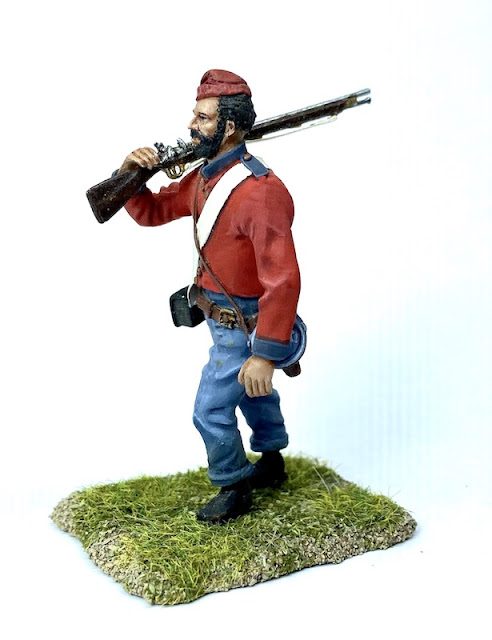 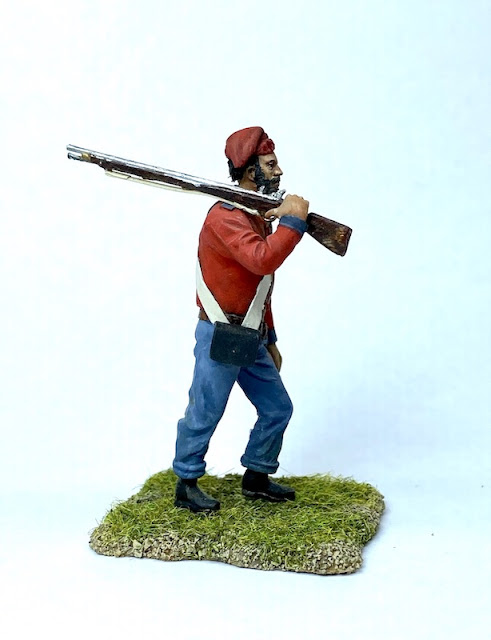 Hard to imagine he was once intended to be a Second World War US Marine. 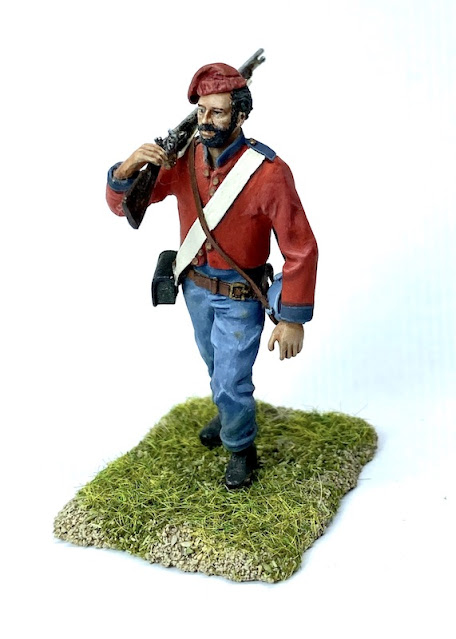 The same process was used for both figures and here the helmet and cover were once again sculpted using Milliput, as were the puttees. 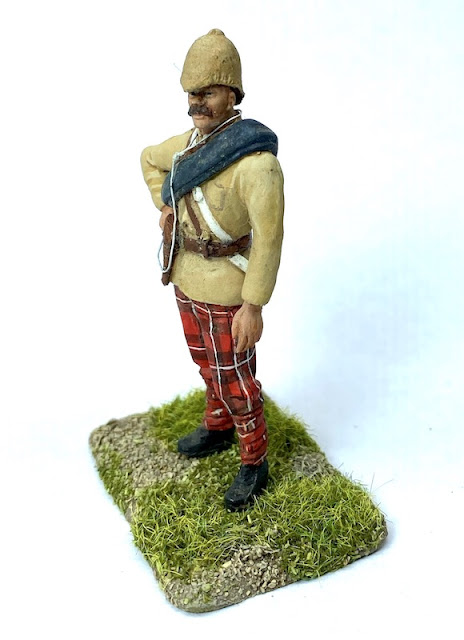 The lanyard was made from a thin piece of copper wire. 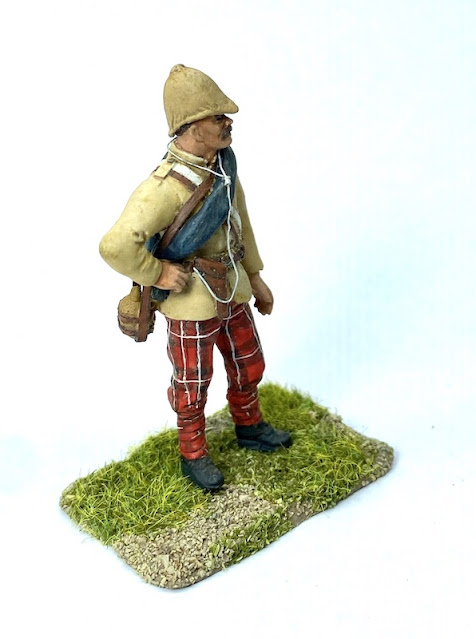 I think he came very close to looking like the image in the Osprey book. 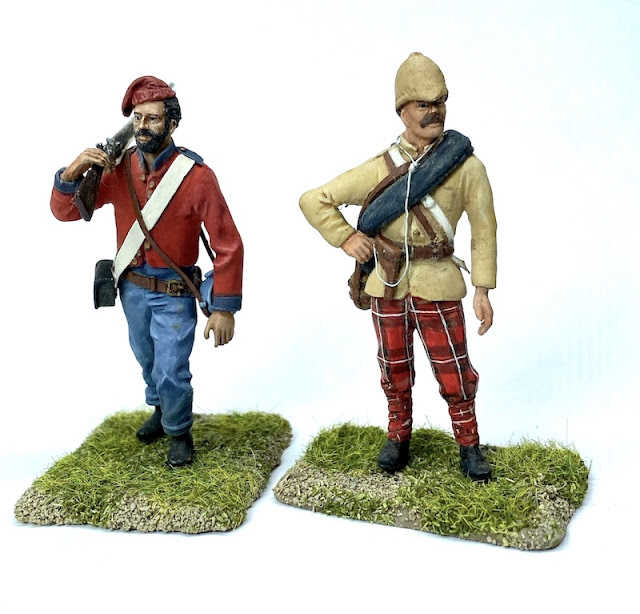 My painting style has changed since then....as have my paints. If I remember correctly these would have been painted with Humbrol enamels and Winsor & Newton oil paints. Smelly stuff, but slow drying, which has its benefits when trying to blend paints on larger scale figures.
The story doesn't quite end there. Also in the box was a trophy that I won for the figures. If my memory serves me right this was for the 'single foot figure' category of the modelling competition held as part of the Victorian Military Fair in London in 1990. The fair was run by the Victorian Military Society of which I was a member. At the time I was helping them edit and publish their journal Soldiers of the Queen. 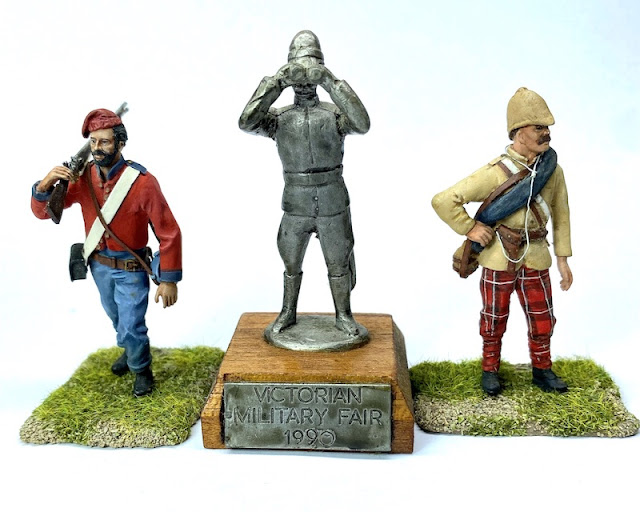 I seem to recall I won another category, either that year or the following year, but I don't seem to have kept that trophy. I remember the President of the society being a bit embarrassed that the award had gone to the editor of the journal and he made a point of saying the awards were decided without knowing who had submitted the figures, so there was no suggestion of an 'inside job' LOL.
Anyhow, I'm glad I've rediscovered them. They are a little slice of my hobby history that I thought had disappeared. 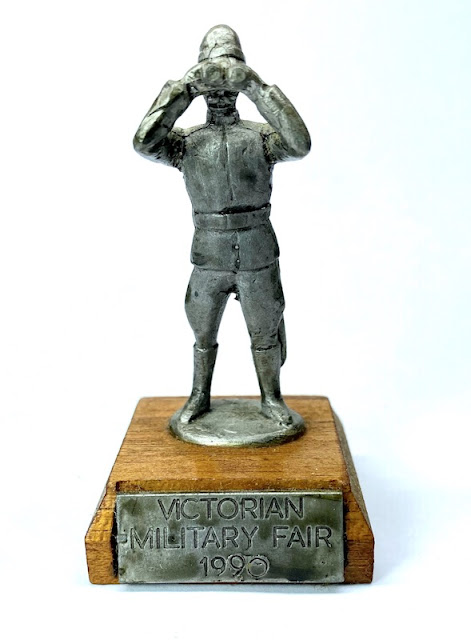 It also goes a long way to explaining my recent interest in gaming the colonial period. I guess the interest has never really left me and I did enjoy painting up the Perry 28mm figures recently. I have to confess that I am sorely tempted to do a group as 72nd Highlanders in their tartan trews. Everything that's old is new again! 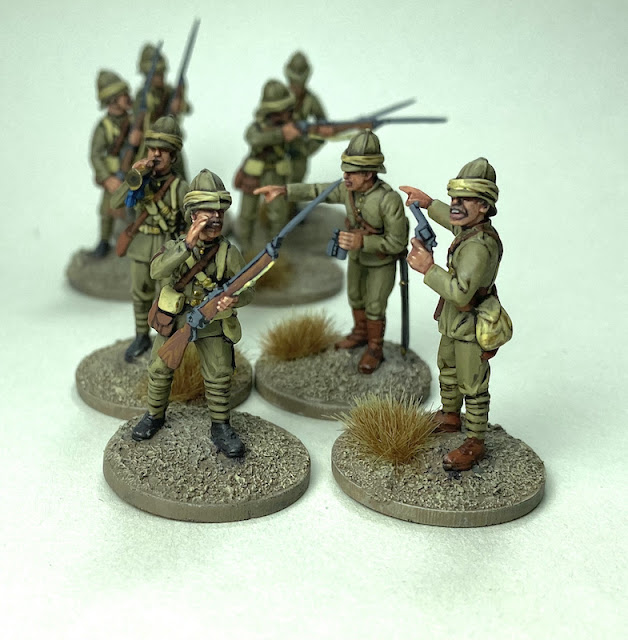 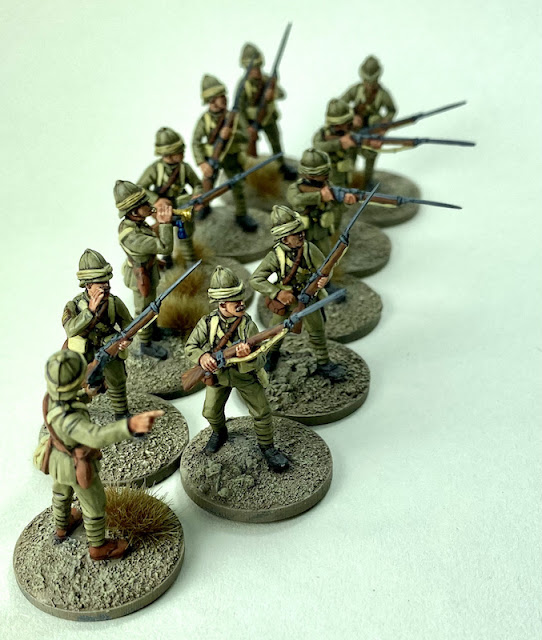 Posted by The Tactical Painter at 14:54