Black Ops is a set of miniature wargame rules written by Guy Bowers and published by Osprey. It describes itself as "a skirmish wargame of tactical espionage combat that recreates the tension and excitement of modern action-thrillers such as the Bond and Bourne films".

The rules themselves are composed of fairly familiar mechanics, but what sets Black Ops apart is the concept of the stealth mission. In these games the defender has limited opportunities for activation until the attacker triggers events which generate noise or suspicion and alert the defender. Those events vary from something relatively benign, like climbing over a wall, to something much more violent, like gunning down a guard. The aim for the attacker is to get as far into their mission as possible before the enemy can respond in force. Once the defender discovers they are under attack the game reverts to a more traditional structure where both players are free to activate their units.

My first attempt at the rules was undertaking a stealth mission set in Afghanistan during the Soviet occupation in the 1980s. I would play the mujahideen, trying to capture a Russian scientist located in a small compound in the centre of a village. 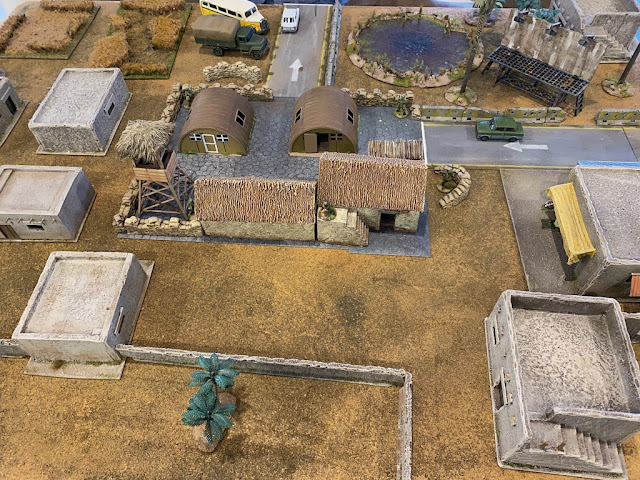 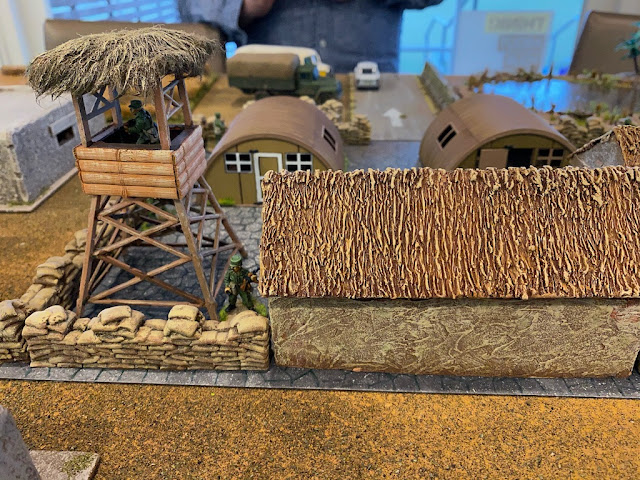 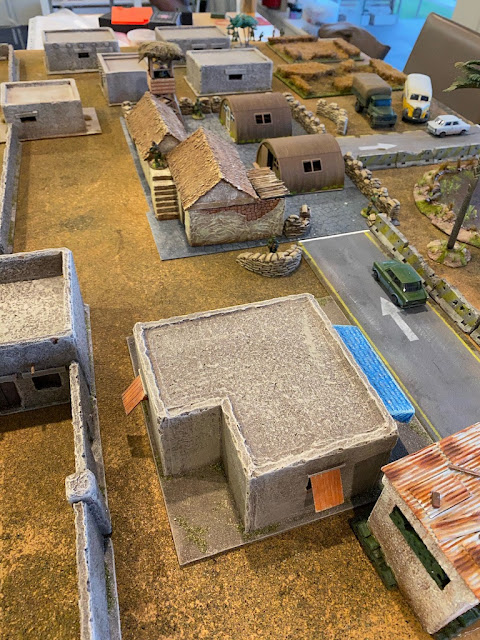 The compound was to be guarded by a group of Russian conscripts who would probably prefer to be somewhere else, in fact anywhere else, as long as it wasn't Afghanistan. Angola, perhaps. 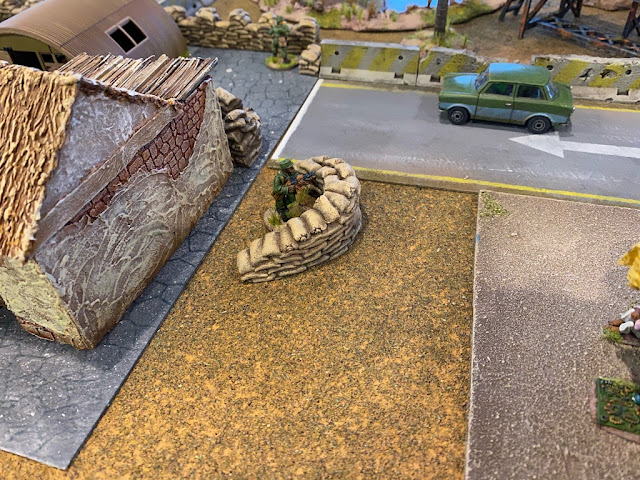 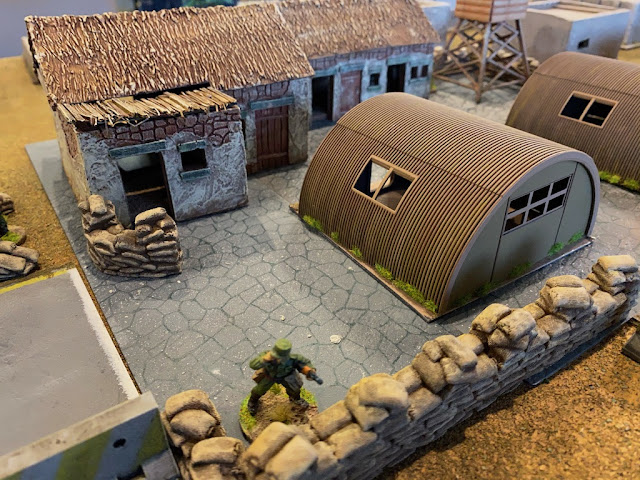 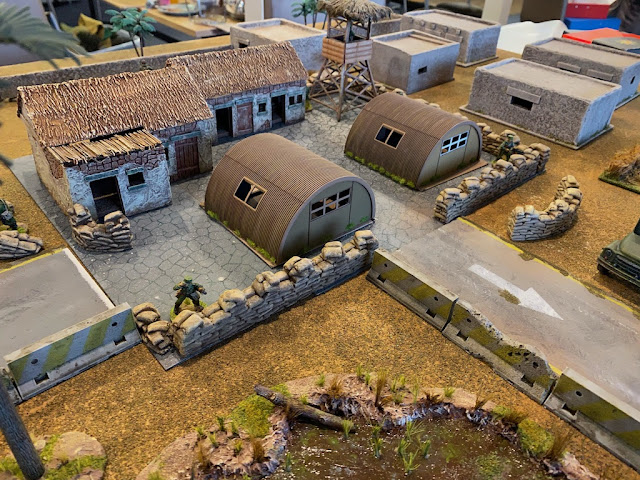 In hindsight this might not have been the best scenario for a stealth mission as the mujahideen, while fanatical and committed to their cause, lack the training and skill of a special forces team. Nonetheless, their opponents were hardly a high grade of soldier and their commitment to their cause was nothing to get excited about. Having decided the basic premise of the scenario each player then builds a force using a point system from lists provided in the rule book. Within the confines of the rules and those lists players are free to put together the force they think can best win them the mission. 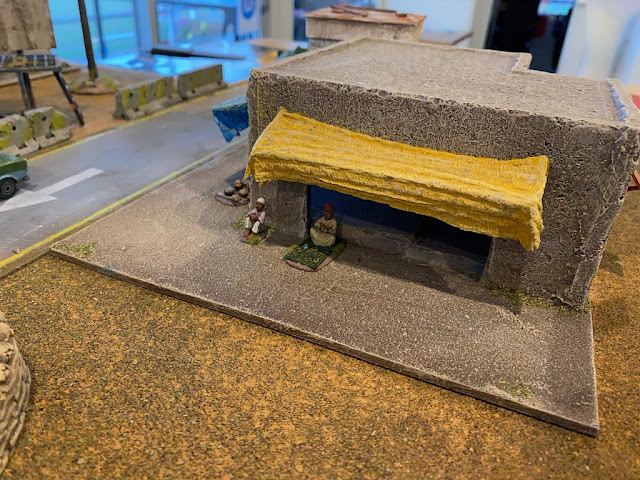 The game is driven by a card mechanic that will be familiar to anyone who has played a set of rules like Muskets and Tomahawks. In the case of Black Ops a regular deck of playing cards is used. Certain types of units or characters are activated when their card type is drawn. This falls into one of four categories - Jacks for regular soldiers, Queens for specialists, Kings for heavies (generally heavy weapons) and Aces for well, Aces (leaders or particularly well skilled fighters). Each side has two cards of each type plus one Joker. Cards for both sides are shuffled into a single deck, placed face down and drawn one at a time to activate units during a turn. A Joker will allow an Ace to have an additional action or to order someone near him to have an additional action. As each card type will come up twice each turn, except for the Joker, there is a very variable sequence to how play will unfold.

There is no specific command and control mechanism, units will automatically activate on their card. Aces are normally also leaders and so these characters have the ability to command others when the Joker is drawn, but that's about the extent of their control.

As you might expect in a set of rules about stealth missions there are provisions for hidden units and for hidden movement. This is an important part of the game, something I can say only with the benefit of hindsight. Unfortunately it was not something I made the most of while playing this game (yeah, yeah... I know... it's a stealth game and moving around hidden might be a good idea).

So, how did our game play out? As already mentioned, my mujahideen lacked the subtle approach and blundered around the village generating noise, something I could have handled much better. 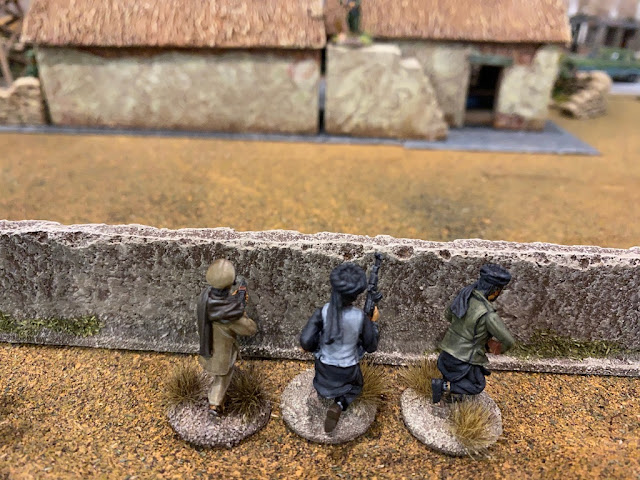 However they did manage to eliminate a few of the guards who were in isolated positions, like one unfortunate soul who wandered rather aimlessly from his post into a dark alley and came to a grisly end at the hands of three mujahideen fighters. 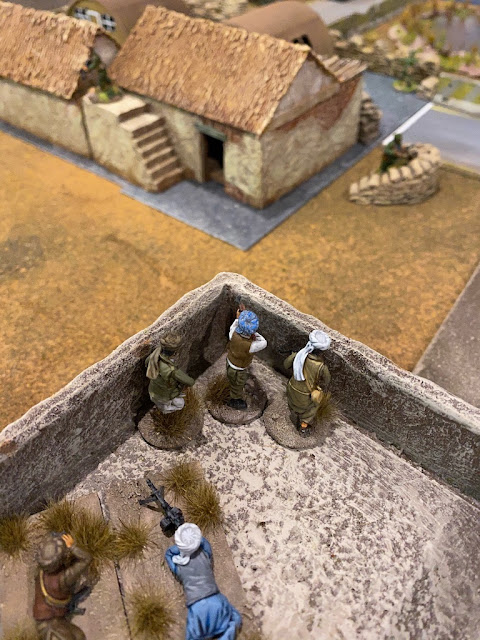 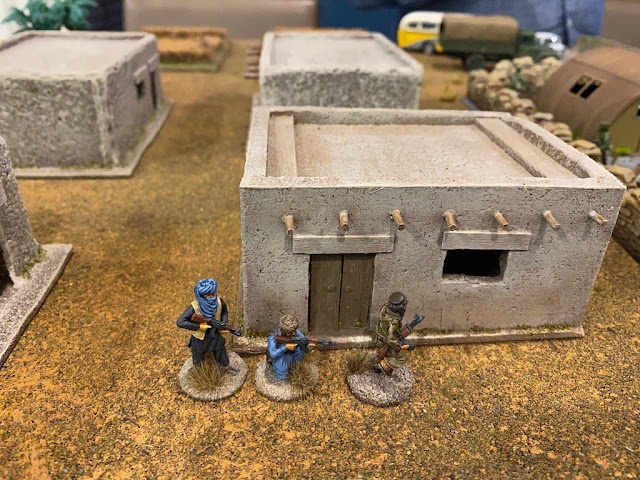 A group of four mujahideen reached the compound and burst into the first building. It was a fortuitous move. They were lucky to stumble upon the scientist, the target for their mission. 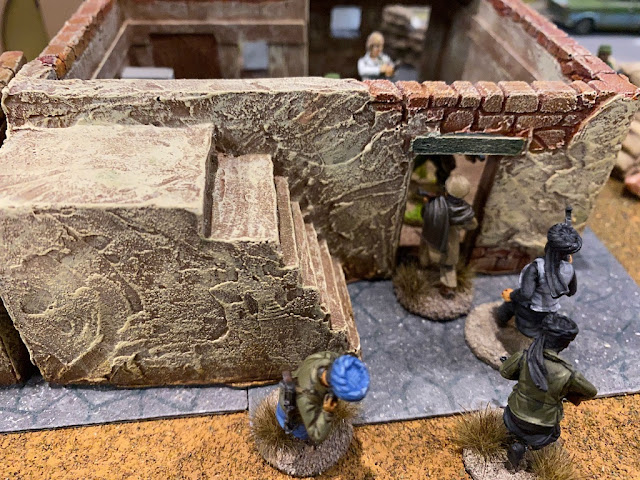 Her guards were determined not to let her go without a fight and they dealt mercilessly with each Afghan as he entered the room. 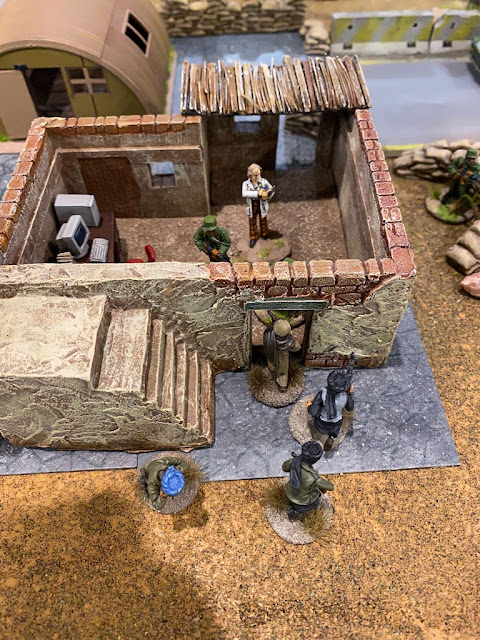 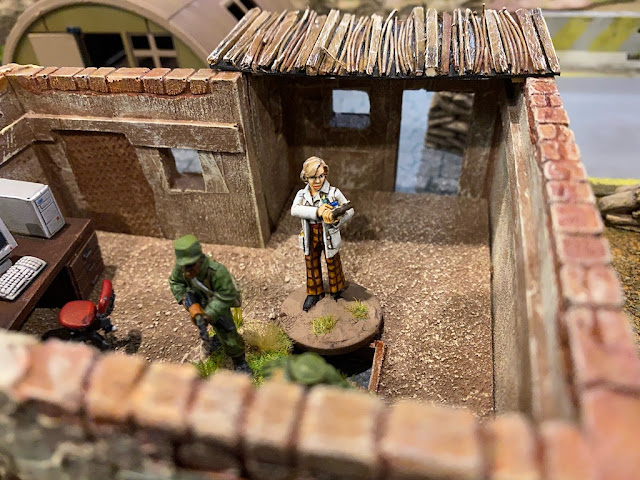 Despite the valour of the guards a few fighters forced their way in. It was clearly a dangerous spot and so the scientist made a quick exit into the centre of the compound. 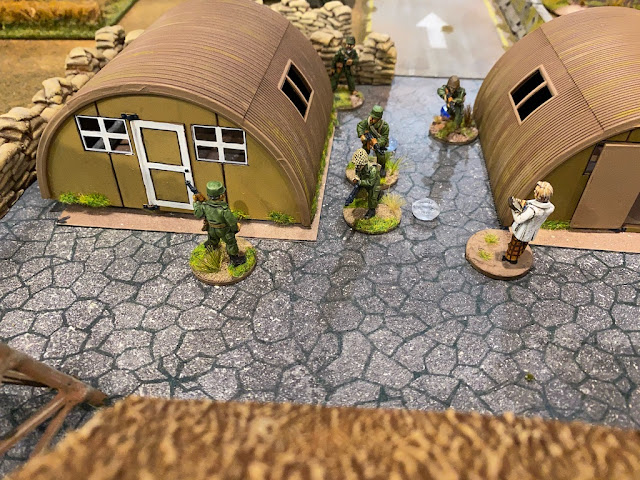 She was hotly pursued by the Afghan leader, who managed to capture her before she reached safety. 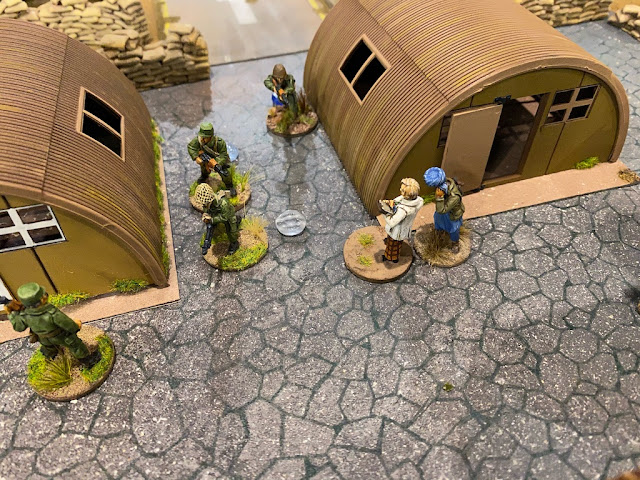 The other fighters made their way around to the main entrance of the compound to lend a hand. 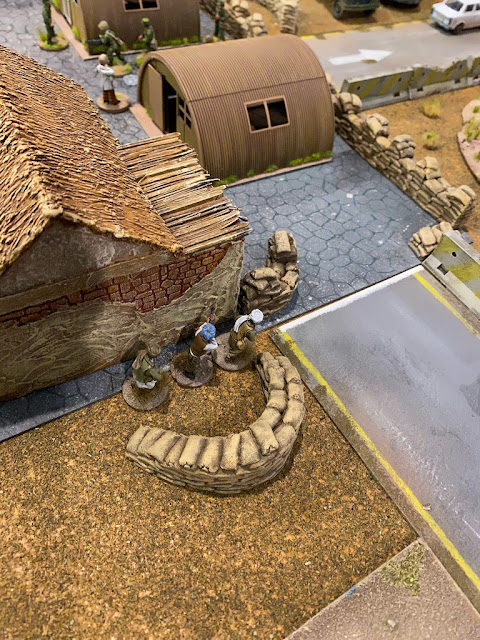 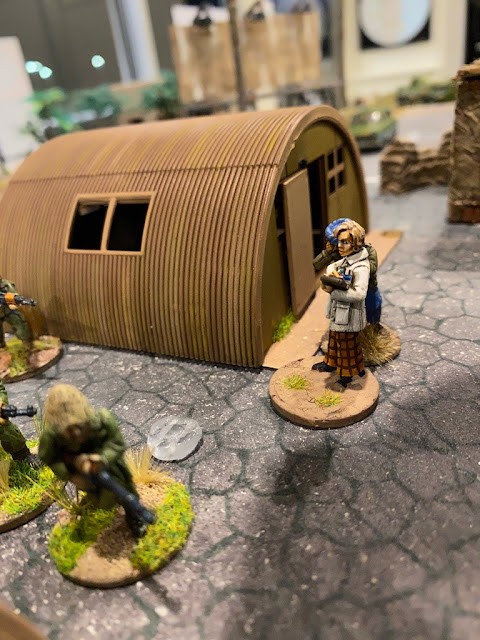 By now the Russians were on full alert and it wasn't long before a wild melee ensued in the centre of the compound. The scientist was manhandled in a wild tussle between the mujahideen and her compatriots while hand to hand fighting raged around her. As is clearly evident, this lacked all the finesse one would expect were this a special forces' extraction, in fact the lack of combat ability demonstrated by both sides made this closer to slapstick. There are times when you actually do need to bring a knife to a gun fight. 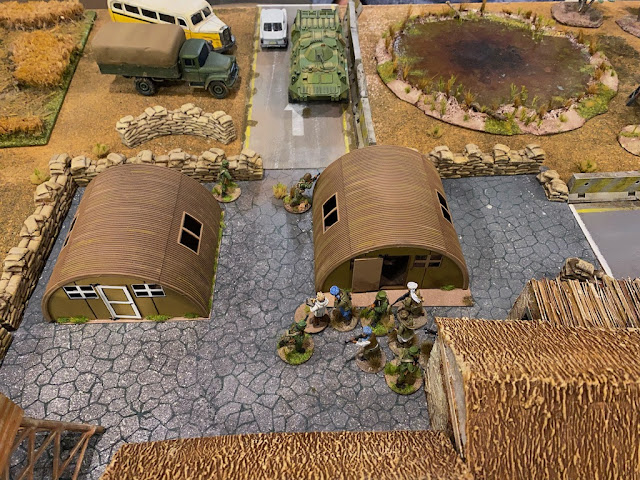 Just when it looked like the mujahideen would gain the upper hand a Russian BTR APC returned to the compound from a patrol mission and that was enough to see the Afghans make a graceful exit without their scientist. 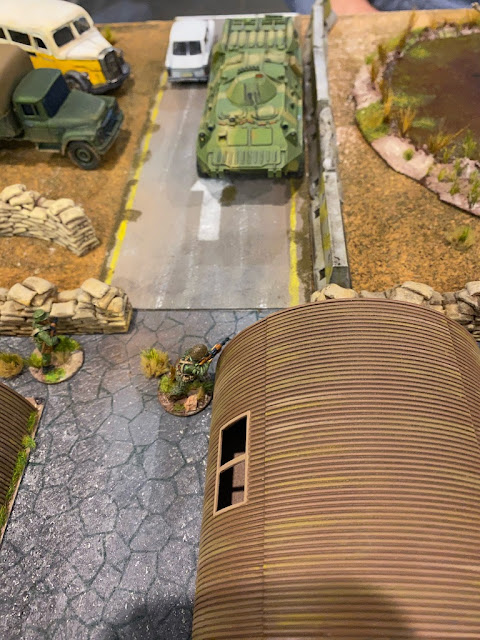 Despite my hamfisted tactics this was an enjoyable game that generated a good narrative. As is always the case when trying new rules there is much that could be done differently a second time. Overall these are a very playable set of rules. As much as I have enjoyed playing Force on Force I could find myself using Black Ops for small encounters and not just the stealth missions - they provide a quick, flowing game with plenty to keep both players actively involved.

There are a few things that I felt were a bit clunky. Given the size of the playing area I'm not sure the rules for weapon ranges need to be as detailed as they are, having three range bands for modern weapons on a 4'x4' table in 28mm seems excessive. I think those could be streamlined and made simpler. I also felt the close combat results could be more decisive, we had a protracted melee in the compound mainly because both sides were evenly matched in their poor fighting skills which meant neither could force a result.

Overall I felt the rules were quick enough to pick up and gave an enjoyable game that will play out in a couple of hours, so perfect for a club night. I'm keen to give them another go.

Posted by The Tactical Painter at 16:58