Getting ready for Last Stand on Opium Hill

Last Stand on Opium Hill is a short, four map campaign for Chain of Command set in Singapore in 1942, just before the surrender. Written by Mark Backhouse it appeared in issue 101 of Wargames, Soldiers and Strategy Magazine.
The campaign pits elements of the Malay Regiment against the Japanese 56th Infantry regiment. As the Japanese advanced towards the city of Singapore, the Malay Regiment was positioned to guard the Pasir Panjang ridge. This ran for five kilometres parallel with the coast, guarding the south-western approach towards Singapore. The ridge was significant as a key position, overlooking Singapore itself and the supply dumps, Normanton Oil Depot, and the hospital at Alexandria. Three rifle companies were spread out over the ridge with a single company in reserve.
Their opponents were the Japanese 56th Infantry regiment led by Colonel Yoshio Nasu from the 18th Division. These men were veterans of campaigning in China and Malaya and had been recruited from tough coal miners from Kyushu. They had been fighting for the previous four days and were supported by Japanese armour and artillery support. The 56th Infantry had considerable tempo but were being pushed to the limit by their continual advance against stubborn resistance.
The editor and publisher of Wargames, Soldiers and Strategy have kindly given me permission to reproduce the campaign maps that appeared in the magazine. They also supplied the images in a higher resolution and for this I am very grateful.
This post is about pulling together the various elements needed to play the campaign but if you'd like to skip this and move straight to the first game you can find a full report in this post Last Stand on Opium Hill Scenario 1.
Most of the terrain featured in the campaign is either rubber plantation, dense jungle or open grassland. I plan to use my palm plantations to represent those rubber plantations. The palm trees were originally created for the plantations that featured prominently in the battles for places like Gona and Buna on the north coast of New Guinea and yuou can see how I made them in this post. 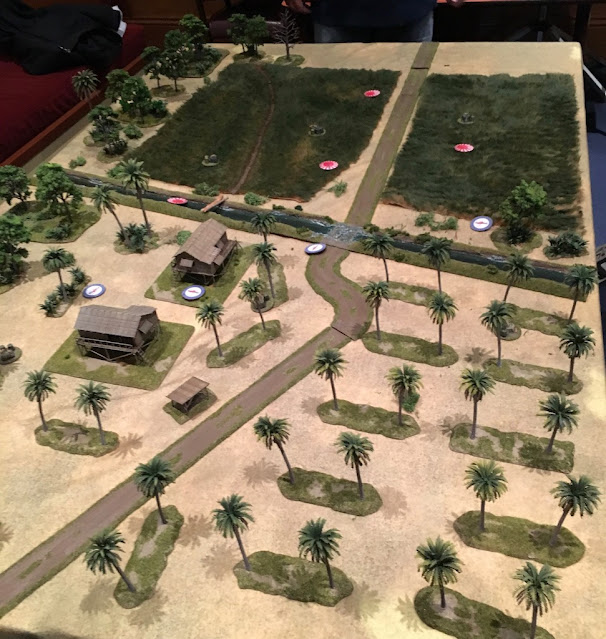 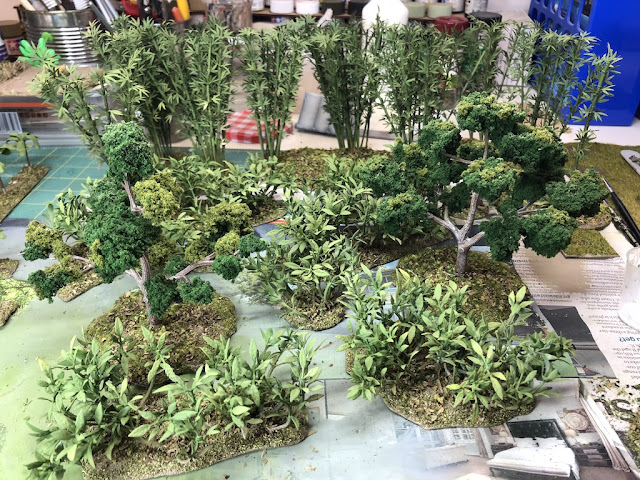 The Malaya 1942 campaign introduced new variable line of sight rules for the terrain in the theatre. Line of sight within the plantation is fairly good but never entirely certain and requires a roll of 12+2D6" to determine how far a unit can see before it can fire. That gives a guaranteed line of sight out to 14" but it becomes a bit more sketchy beyond that.
The same applies in secondary jungle except it's considerably more difficult to see any distance - only 6+1D6". It's also difficult to move - any infantry movement faster than tactical will inflict one point of shock per D6 of movement on the unit.
The final map in the campaign features a couple of houses belonging to the plantation owners and for one of those I'm going to use my recently built Sarissa colonial house, which was made with the Far East in mind but has yet to be used in a game. You can follow that build in this post. 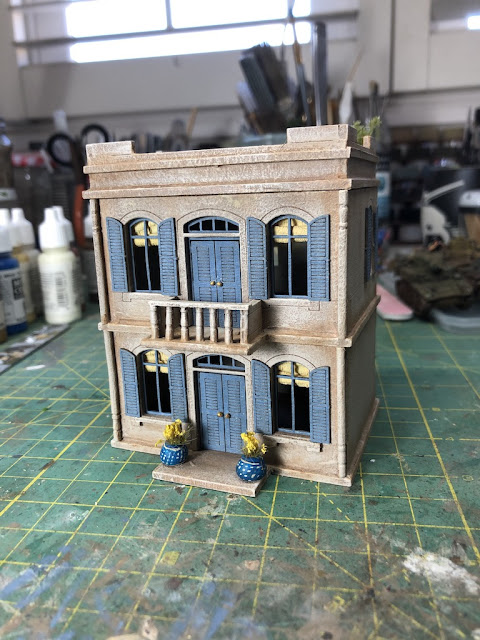 I wanted to put the colonial house in a suitable surrounding and so made use of a base I had made for the village of St Germain du Pert for the third scenario in our 29, Let's Go! campaign set in Normandy (it's the one next to the church in the picture below). 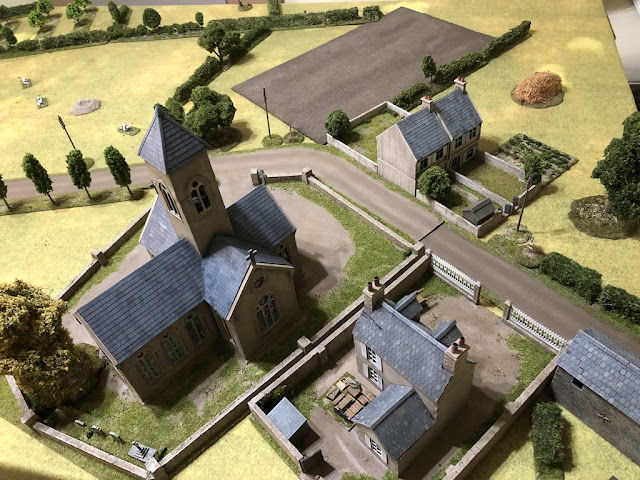 Nothing like trying to make sure your terrain is as versatile as possible. I added a couple of palm trees to give a more tropical feel and a civilian car. The car is from Oxford Diecast. 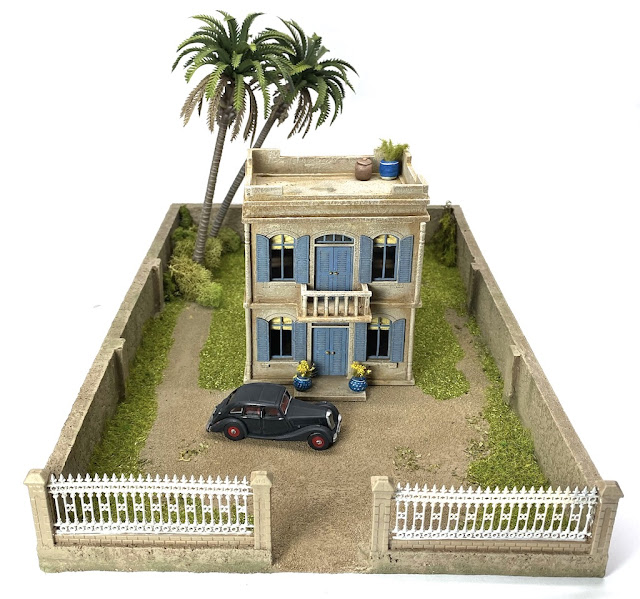 The terrain will also feature native Malay style huts at the small village of Buena Vista that sits on the ridge. For these I will use both my venerable old Airfix jungle outpost huts and two new huts from Sarissa that I modified.
The Sarissa huts are MDF and form an excellent base for these local houses but they do benefit from some pimping to give them more character. You can follow how I made those in this post. 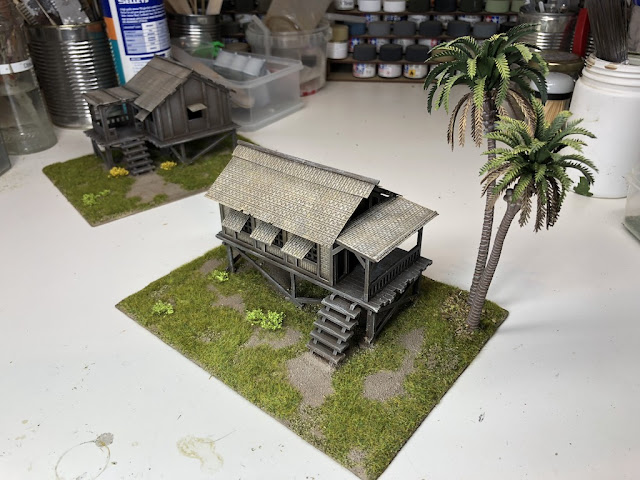 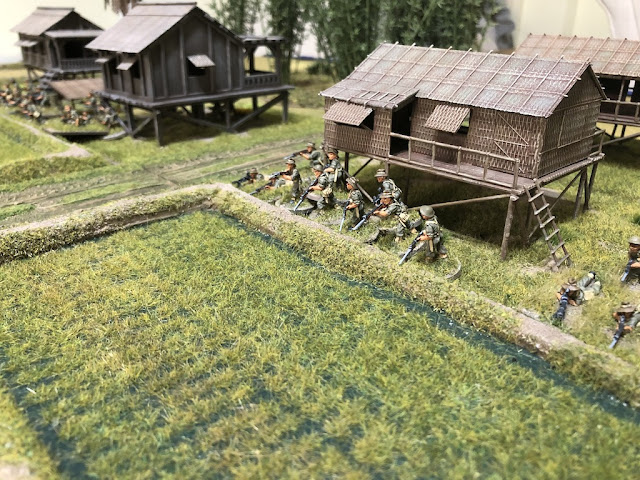 The third scenario in the campaign sees the Japanese come across a position featuring a concrete pillbox that had been built as part of the defences for the Singapore naval base (contrary to popular belief not all the naval bases defences were facing out to sea).
One thing I don't own is a pillbox and so with this campaign in mind I had a go at scratch building one using foamcore, with inspiration from one of the Terrain Tutor's very useful video tutorials. To be honest I'm not totally happy with my results. The removable roof of the pillboxes is not the seamless fit I was hoping for, so it's just about passable and will serve its purpose for now. 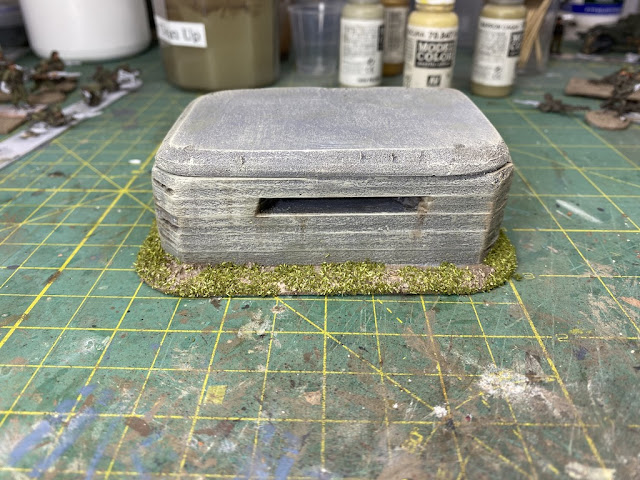 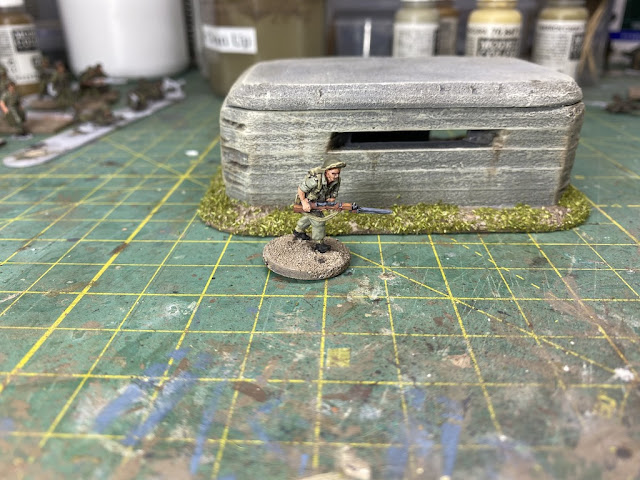 My Japanese collection has seen action before, most notably in the Malaya 1942 campaign but since then I've added a few extra pieces including additional figures to make up the numbers for the large platoons. There's a separate post on how I put this platoon and supports together. 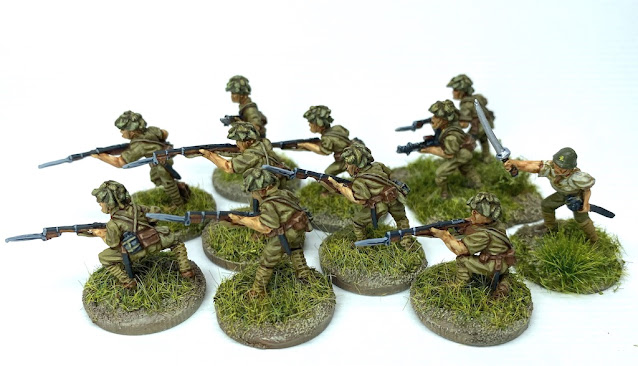 The platoon is based on the 1941 lists that are available from the TFL website. These also include several of the special rules and national characteristics that the Japanese can make use of in this campaign.

These include a few worth taking note of:

Jungle Fighters
In the first year of war against the Allied forces the Japanese developed a reputation for being audacious jungle fighters, able to move rapidly and silently through difficult terrain and surprise their opponent with an attack from close quarters. To reflect this in the period 1941 and 1942 the Japanese Patrol Markers use 14” as both their move distance and the distance from a friendly Patrol Marker within which they must remain. When deploying from a Jump‐Off Point, regular Japanese troops must deploy within 9” of that point.
Ruse
The Japanese were no respecters of the European view that wars should be fought according to certain legal rules and principles. Consequently they were happy to use any number of tricks, ruses and general deceptions to gain an advantage over their opponent. As the war progressed their foes grew wise to these, but to reflect their ability to wrong‐foot their enemies in the early stages of the war the option of a Ruse will allow the Japanese player to either deploy one unit an additional 6” further from a Jump‐Off point than would normally be the case (15” for regular troops, 18” for elite troops) OR to move a jump‐off point up to 18” in any direction, so long as it is further than 12” from any enemy troops or Jump‐Off Point.

Grenade Discharger squad
This squad features three 50mm grenade discharger teams. Japanese doctrine insisted these were most effective when grouped together. So these teams do not work independently and the squad must fire all its grenade dischargers at the same target using the same ammunition (mainly HE, they have only a single smoke round each).
Neo-Bushido
Japanese units are able to take a bit of punishment and therefore they can ignore the first two points of shock that they are carrying.
The campaign will be a first outing for my early war tropical British platoon. Much like other formations raised in the Empire the Malay Regiment was composed of local Malay troops led by a mix of British and Malay officers. They were part of the 2nd Malaya Infantry Brigade which included 2nd Battalion Loyal Regiment (North Lancashire) and 2nd Battalion 17th Dogra Regiment. As they were part of the British Army and operate with those characteristics in the game, for convenience I will refer to them in the AARs as the 'British'.
Once again the platoon is based on the 1941 lists that are available from the TFL website. These are the figures that I should have used as the Australians in the Malaya 1942 campaign and you can see how I put those together in this post. When we played that campaign I used my later war Australians in their jungle greens as substitutes, but to be correct they should have been in khaki drill tropical kit as those units were originally destined for North Africa. 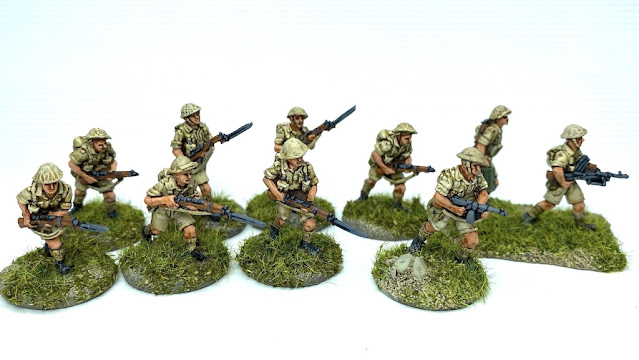 One section in each British platoon is armed with a Lewis gun instead of a Bren which will allow me to use some of my Early War Miniatures British in pith helmets. 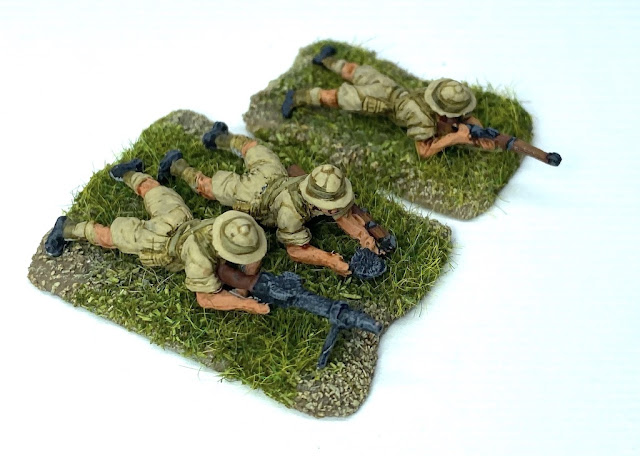 The Japanese have armour available in the form of Type 97 Chi Ha and Type 95 Ha Go. 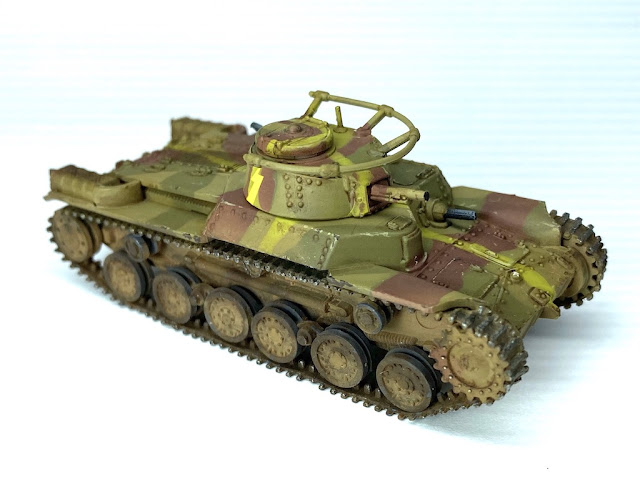 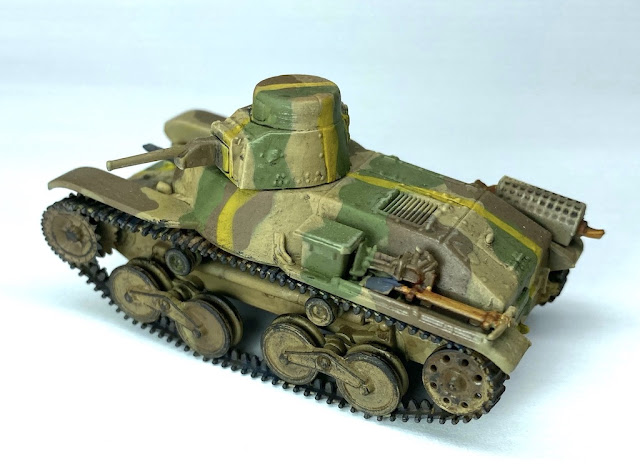 The tanks won't have it all their own way and while the platoon's inherent British Boys rifle will present something of a threat. 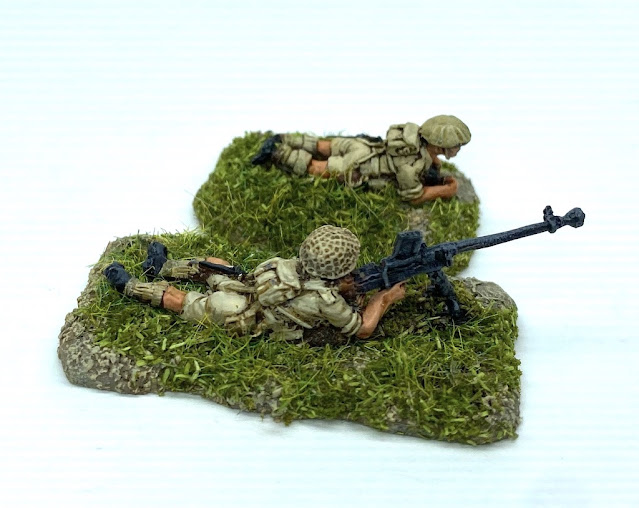 The 2 pounder AT gun will be the weapon they will need to fear the most. 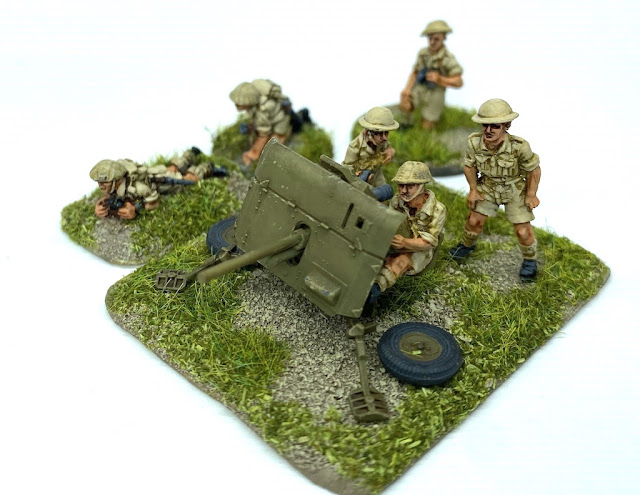 You can follow all the action from the first scenario in this game report.
You can find reports for all of our Chain of Command campaigns on the campaign AAR page.

Posted by The Tactical Painter at 15:37