After I posted the game report for Scenario 1 Probe at Moditten, the first game in the Westwind campaign for Chain of Command, there was a comment in one of the forums teasing me about the empty and glassless greenhouse that featured on the table. It was more than a fair point, but all the more so as I'm currently working on scatter terrain to try to bring more atmosphere to my terrain. Needless to say it was enough to sting me into action. 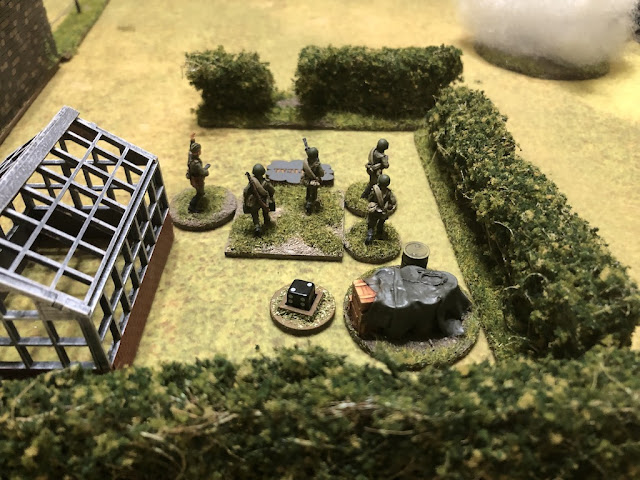 I must confess it is a rather sad looking greenhouse in its current state and while it could do with detailing the thought of actually adding glass was just one step further than I was prepared to go. However, adding a base and something in the interior was an easy enough proposition. 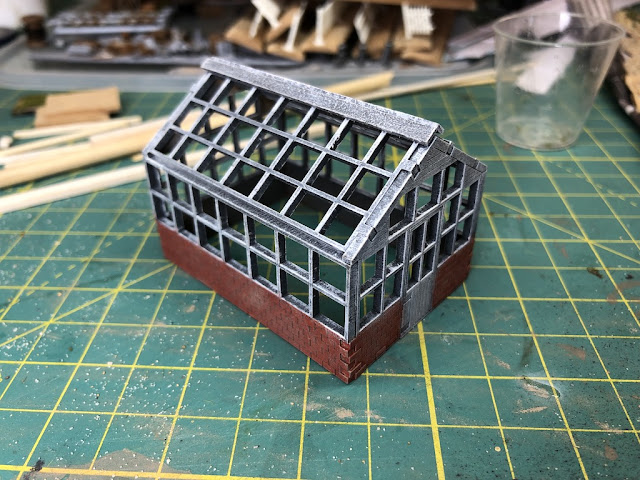 I did consider making a whole 'back garden' piece complete with fence, but in the end I decided a small base would be the more versatile option. I put together a simple interior using pieces of MDF, matchsticks, some balsa and sections of wooden rod cut down to make flower pots. The interior is not that visible, so nothing too clever or subtle here. 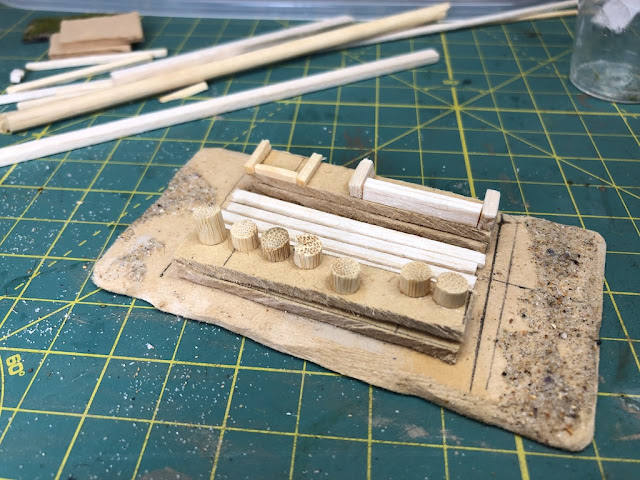 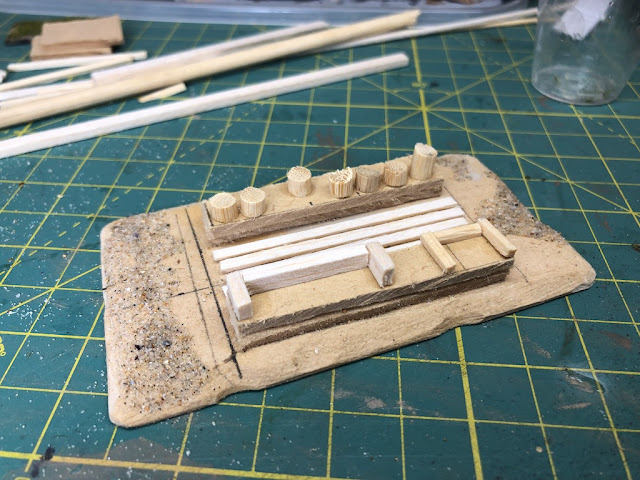 I would paint this and add plants, before sitting the greenhouse over it all. 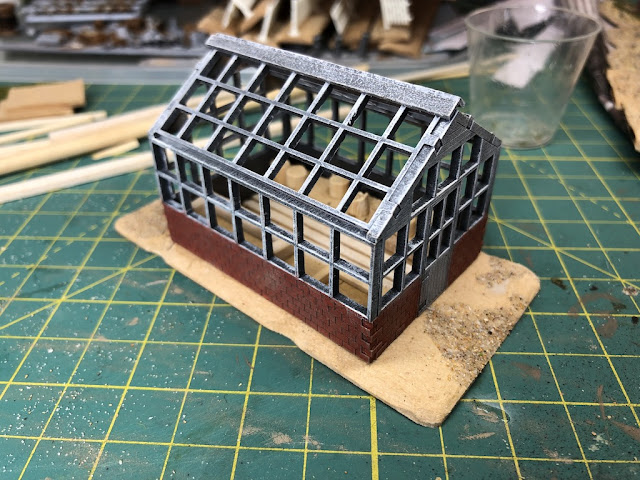 The plants themselves would be made from clumping foliage and other terrain materials that I had to hand. Gaming in 20mm has the advantage that it conforms very closely to HO and OO railway scales, so there is a lot out there in terms of terrain and accessories, however after looking at some sites I decided I could probably scratch build something myself for a fraction of the price. 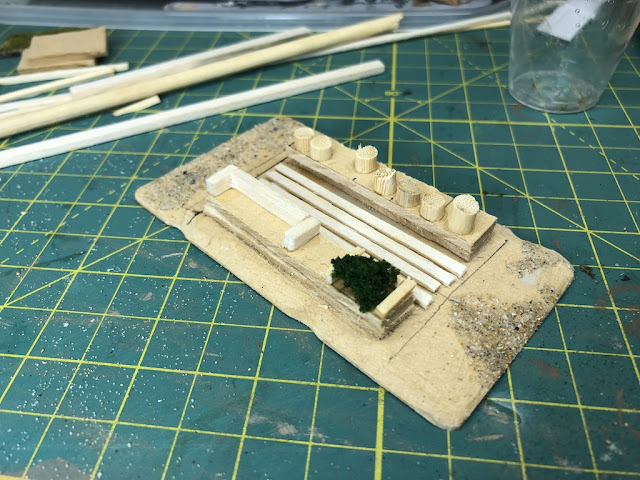 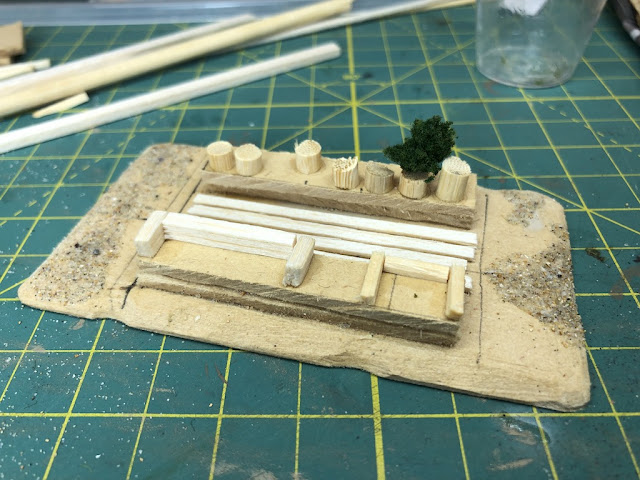 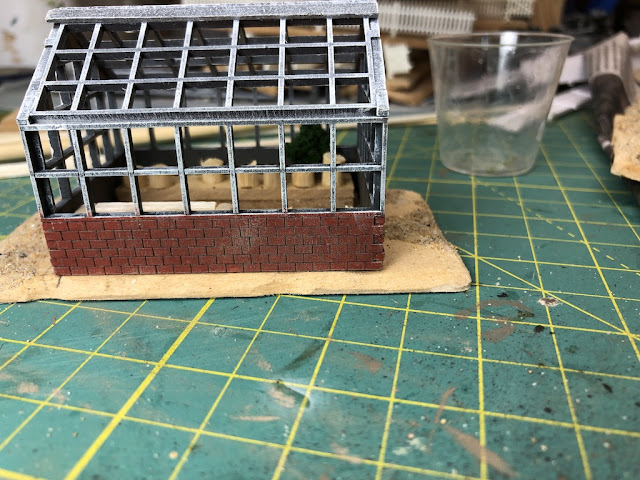 While I was pondering what might work for flowering plants I found the answer staring me right in the face. On the workbench was a cheap orchard tree from a pack of twenty that I had bought from a seller in China. It gave me an idea. I cut off sections of branch and drilled holes into the plant pots. When mounted like this the branches made very quick and effective flowering plants. An easy solution. 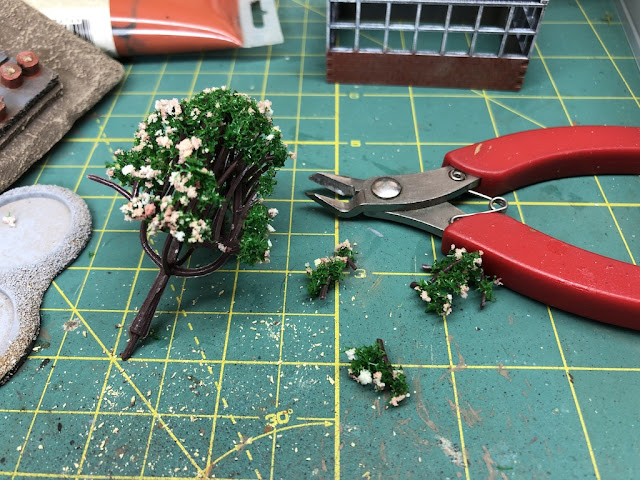 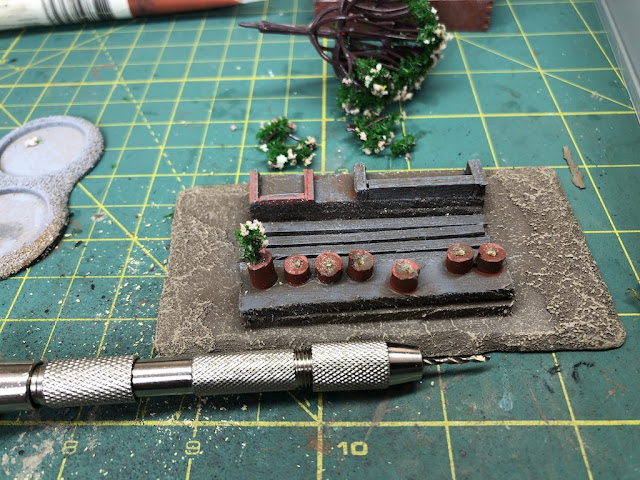 In hardly any time at all I had a nice set of potted plants. I can see this working for other terrain pieces. 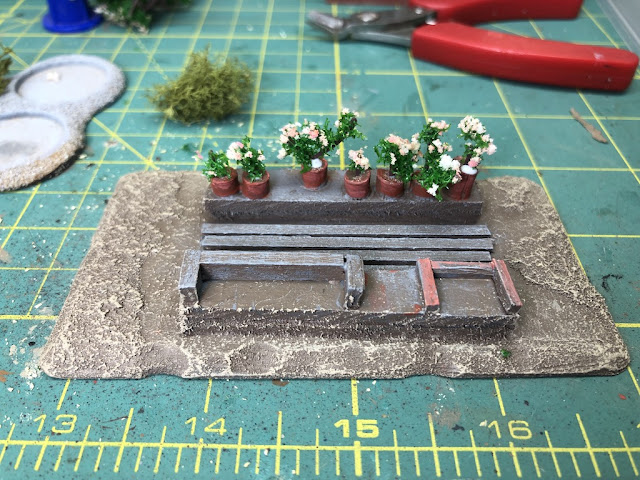 For variety I added some lichen and clumping foliage to the other sections to give a varied mix of plants. 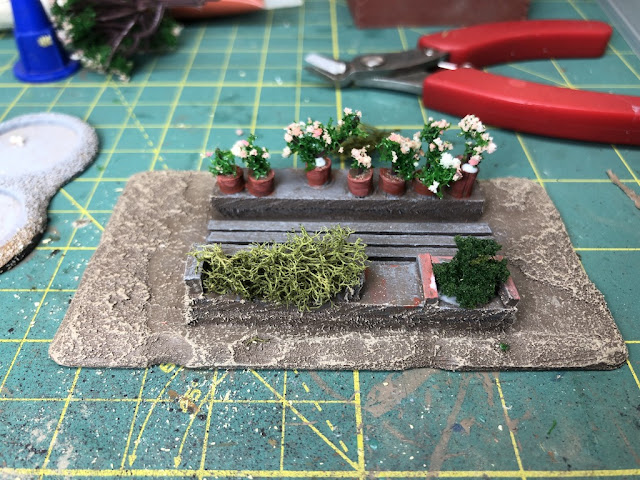 With the vegetation in place all that was left was to glue the greenhouse to the base and apply some flock. 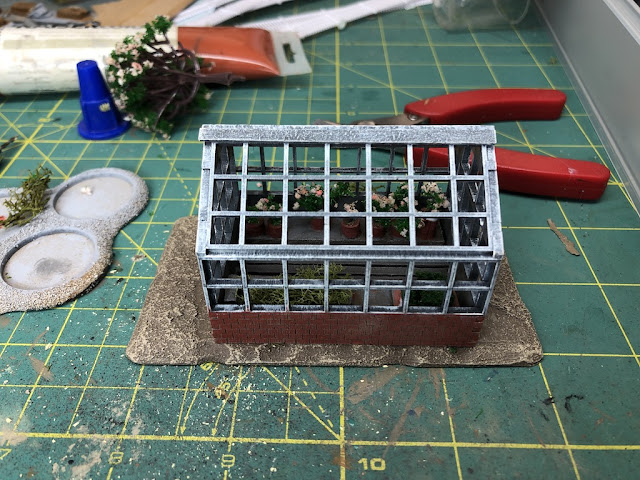 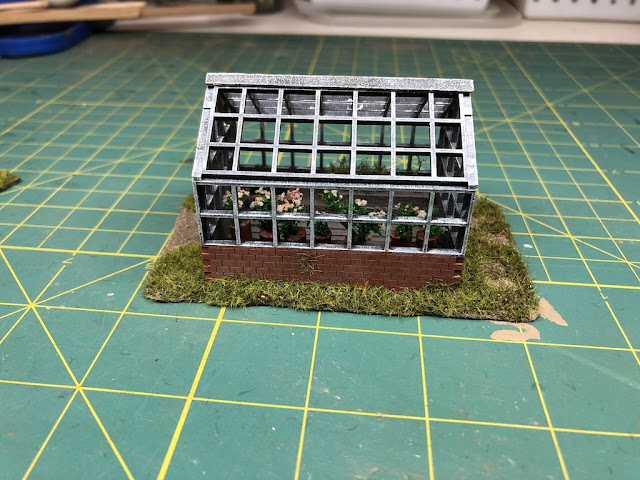 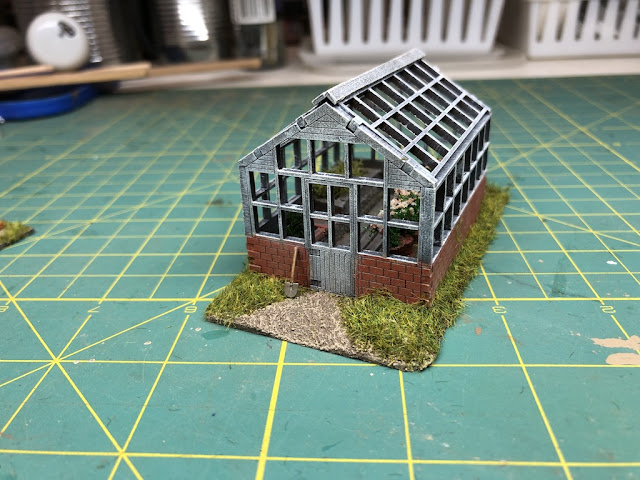 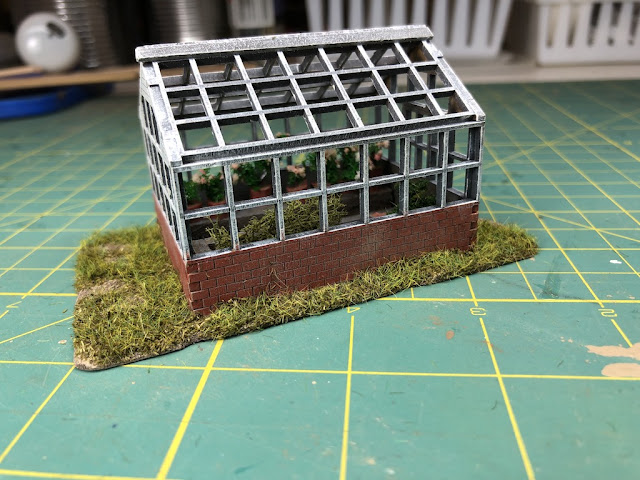 Of course, it still remains a greenhouse devoid of glass, but considering that none of my buildings have glass in their windows I won't be losing any sleep over it. What I do have is a greenhouse that will look a little more lived. It's amazing what these small details can do to lift the look of a table. This was a quick job at no cost (other than raiding the terrain box) and something I did while working on other terrain. Talking of which.... 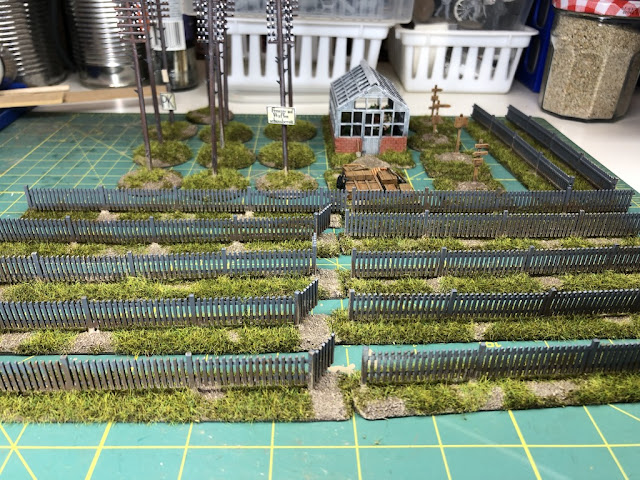 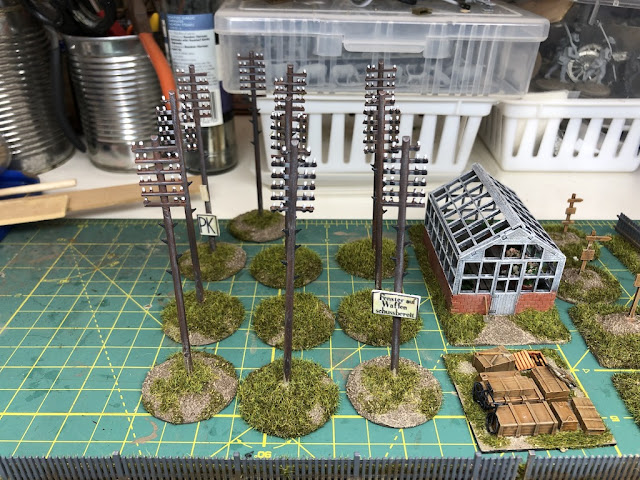 The signposts come from the Airfix Forward Command Post, a great source of accessories for this sort of terrain project, as it includes pick axes, shovels, bikes, boxes and more. I plan to print off some signs of WWII vintage and apply them to the sign posts to finish them off. The remaining boxes are resin pieces from Value Gear, who do a very good range of these and various other stowage items for AFVs. 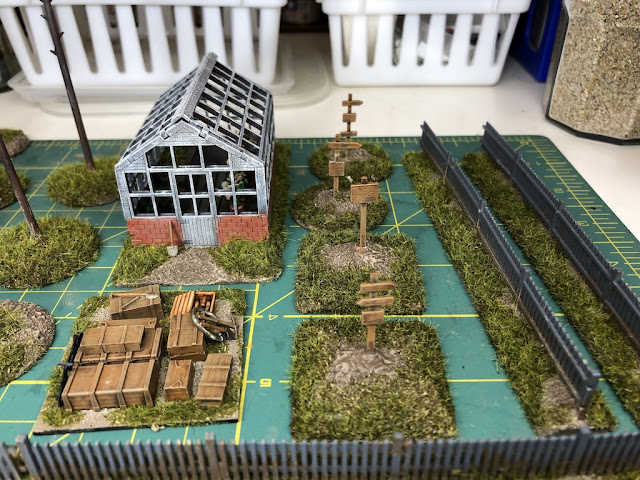 The picket fences will be used in an upcoming Westwind scenario set in the town of Metgethen and I have no doubt will have many other uses beyond that. Despite the fact you get six foot in length in a box I will actually need to make more before we get to the Metgethen scenario. Such is the life of a wargamer.

Posted by The Tactical Painter at 09:36