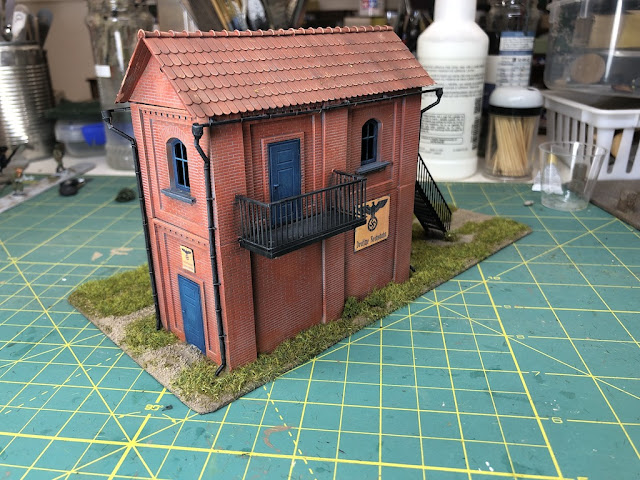 The fourth scenario in the Westwind Konigsberg campaign for Chain of Command is an action alongside the rail lines leading into Seerappen and features a railway signal box. Despite the fact I game in 20mm and that HO is very close in scale I've had trouble finding a suitable building for this period (plenty if I want to do 1960s Britain, but not the case for 1945 East Prussia). None of the MDF manufacturers seem to make one either, certainly not in 20mm anyway, but while searching I came across the Mini-Art 1/72 Watchtower. Now a 'watchtower' is a strange description and I'm sure somewhere in the translation something got lost (Mini Art are a Ukrainian company). No matter, it will certainly do for my needs. 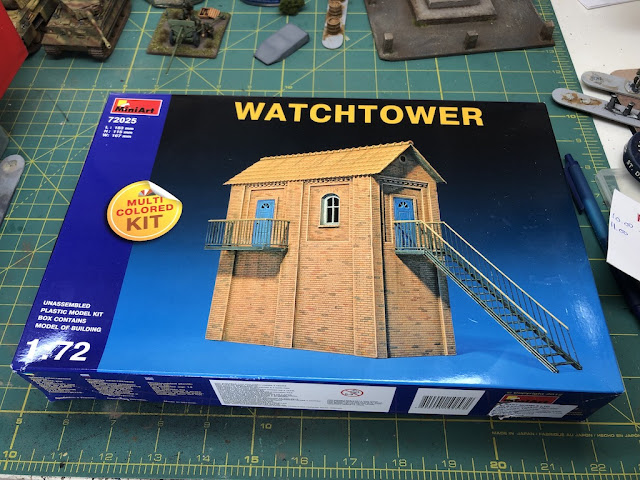 It looks like it is intended for modellers as some of the elements are a bit delicate for gaming, nonetheless it's the correct scale and looks right. Unlike so many MDF buildings it really doesn't need a lot of work to make it presentable. It does come in pre-coloured plastic, but this really doesn't do you any favours, as the colours are fairly horrendous. So it's mainly in need of a paint job and a suitable base. 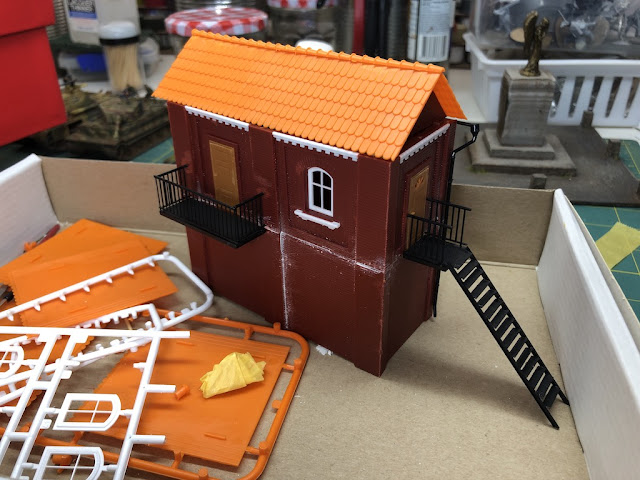 Once constructed it was glued to an MDF base and the whole lot primed in grey. Amazing how different (and better) it looks once primed. 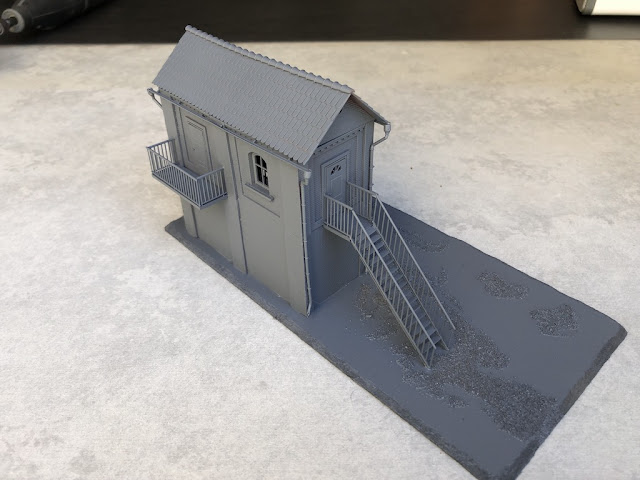 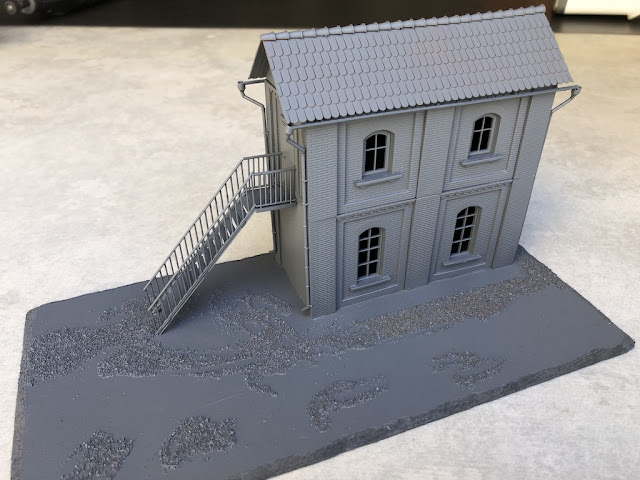 The brick work is quite well defined and with that in mind I used my airbrush to spray light grey in patches to represent the mortar. 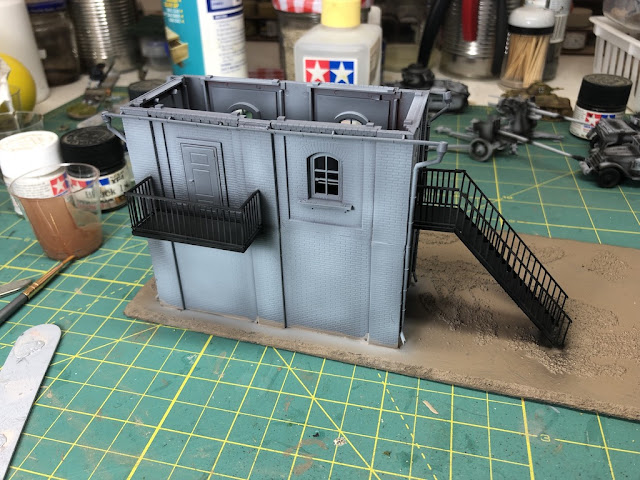 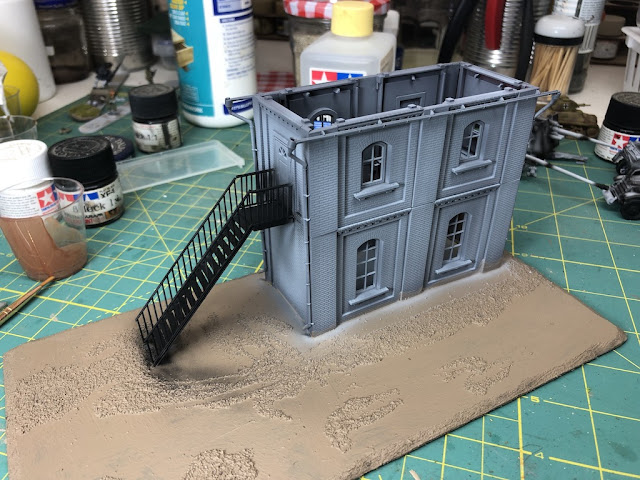 The bricks themselves were painted using something between a wet brush and dry brush technique - in other words the brush was not that dry that I was dry brushing but not so wet that the wet brush technique would allow paint to seep in between the bricks. I used a mix of Vallejo colours for this, mainly Red and Orange Red. The brick colour was then lightened using Buff and the whole building was given a dry brush to pick out the highlights. 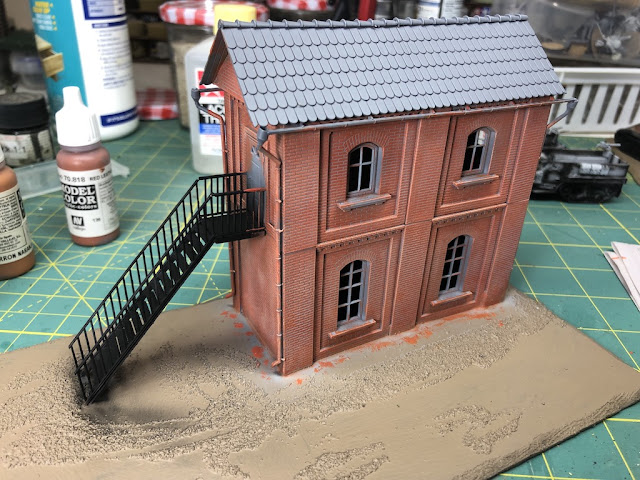 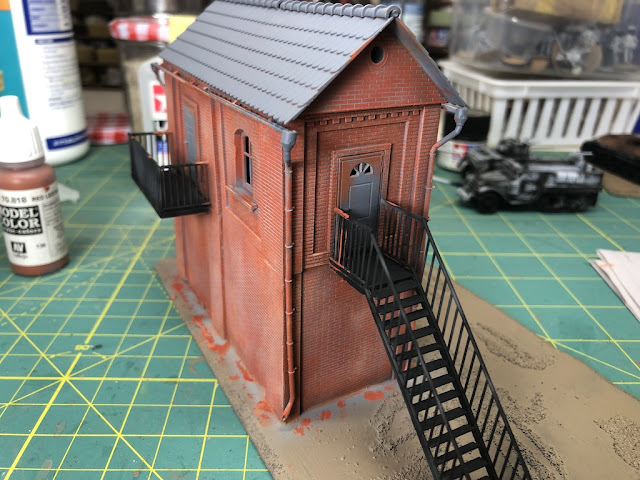 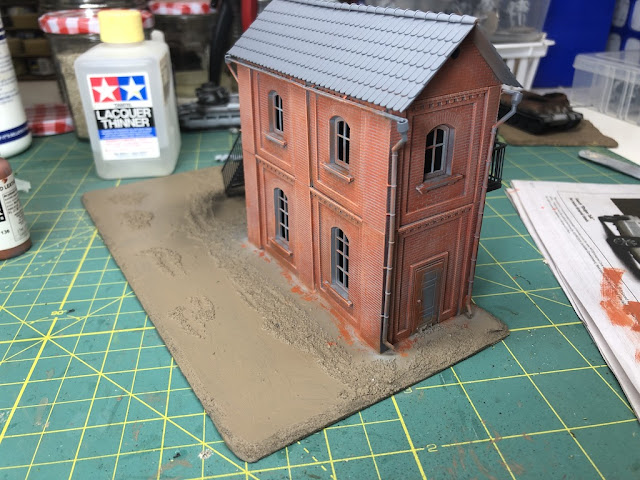 The roof tiles were painted Terractotta using a craft acrylic paint and then dry brushed, first in a lighter shade and then in various shades of browns and greys to break up the solid orange look. The woodwork of the doors and windows was painted using Vallejo Dark Blue. 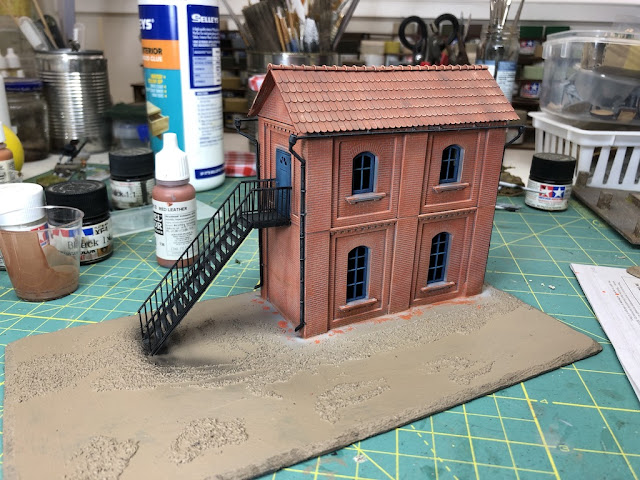 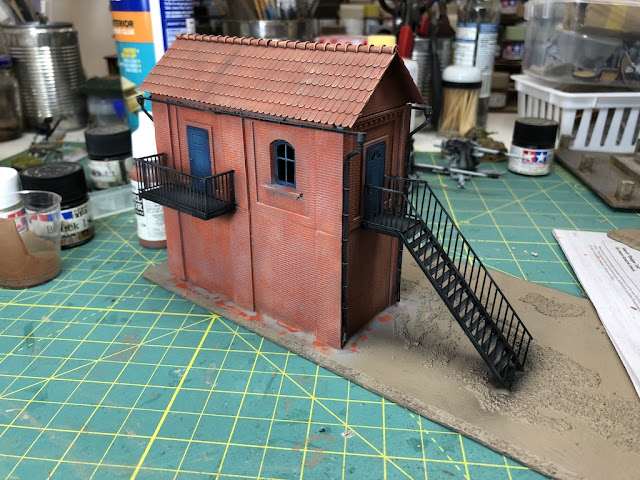 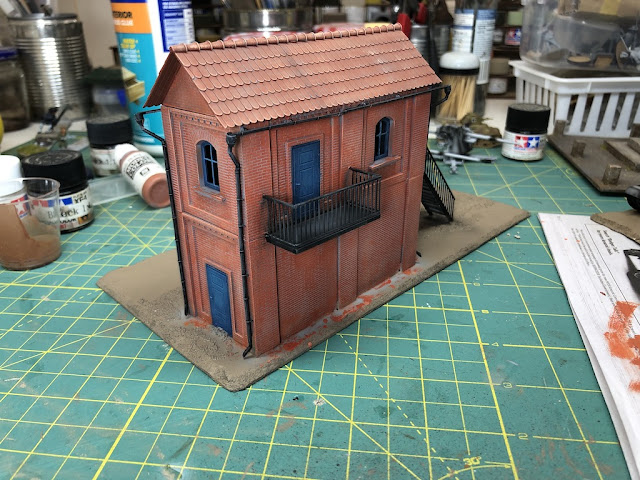 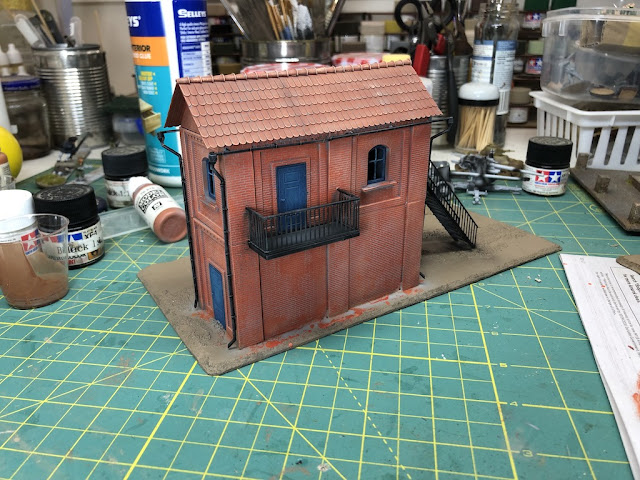 I wanted to add a little more character and so downloaded some images of Deutsche Reichsbahn signs from the web and resized these down in scale. 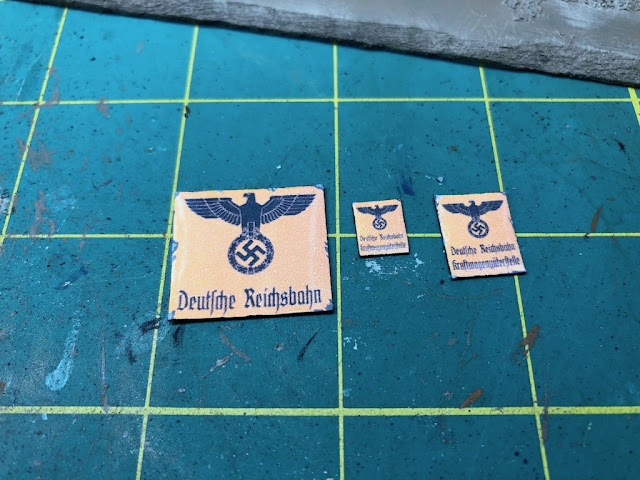 I mounted them on card and painted around the edges to give them a slightly aged and distressed look before putting them in various locations around the signal box. 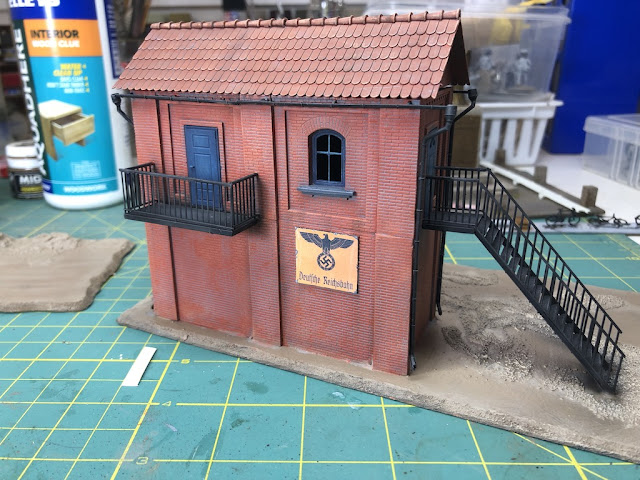 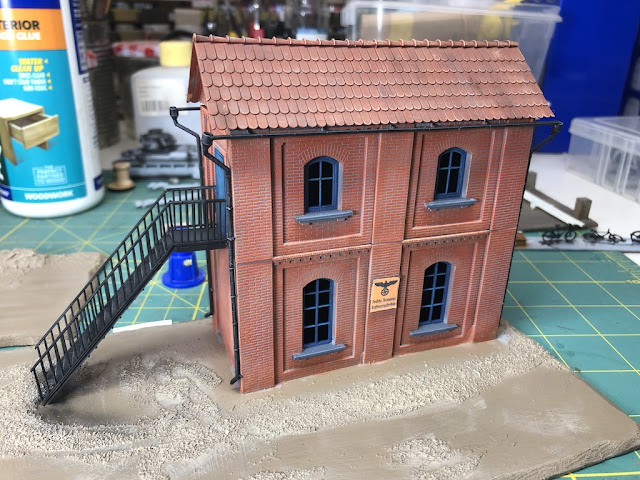 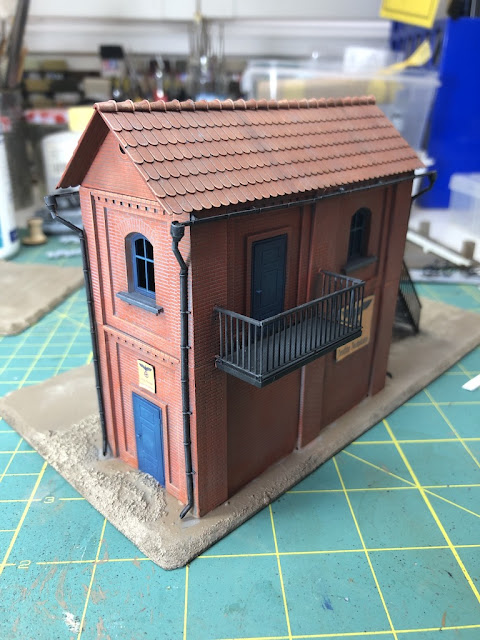 Finally the base was flocked and a few accessories like a bike and some tools were added to give it more of a lived-in look. 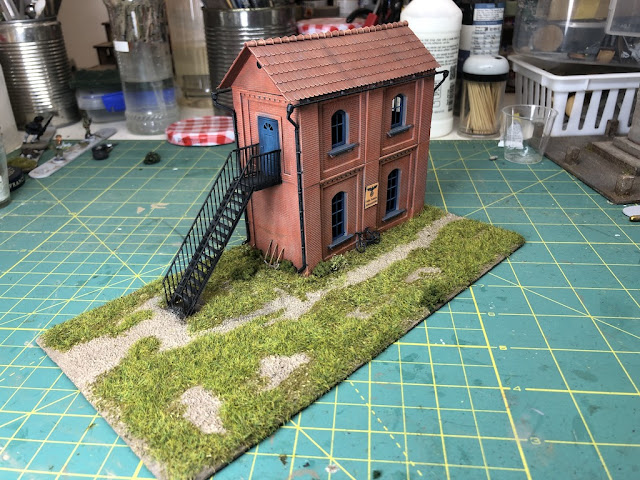 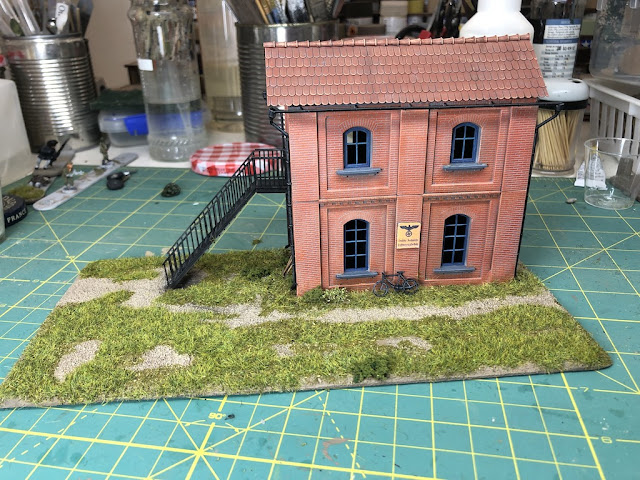 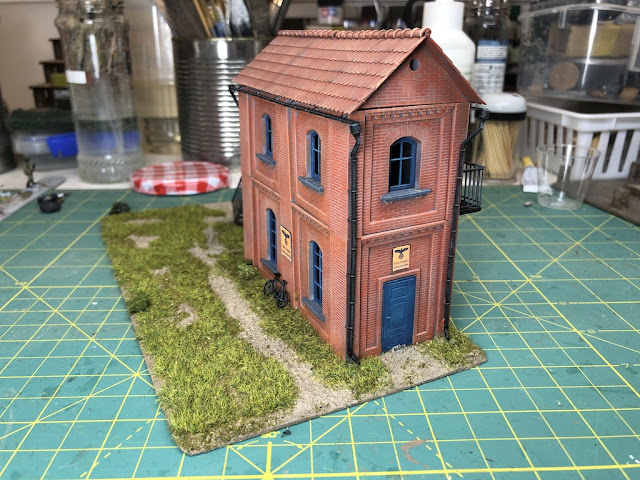 And here it is with some AB Russians for scale. 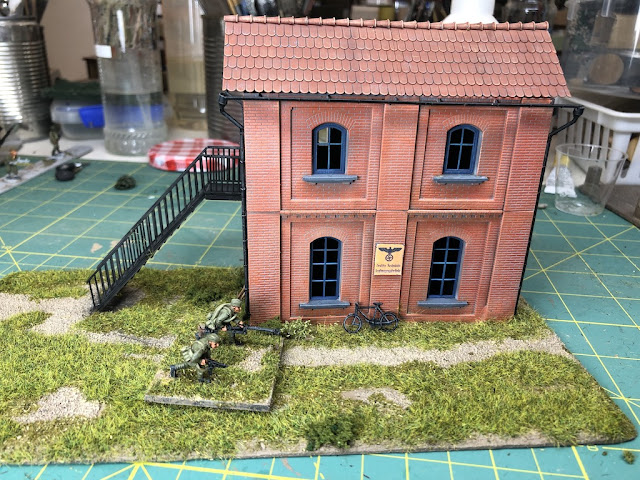 I hope to see this in action in a few weeks when we reach scenario four in the Westwind campaign. You can follow the game reports for all of the Chain of Command campaigns including the Westwind Konigsberg campaign on this page.