CanCon and Chain of Command

CanCon is the major event on the Australian gaming calendar and takes place in Canberra over the Australia Day holiday weekend at the end of January. It seems to grow larger every year and has expanded well beyond the original miniatures and board gaming wargame convention it once was. It now features everything from Cosplay to collectable card games; family board games to Warhammer 40k; Bolt Action to Gaslands. 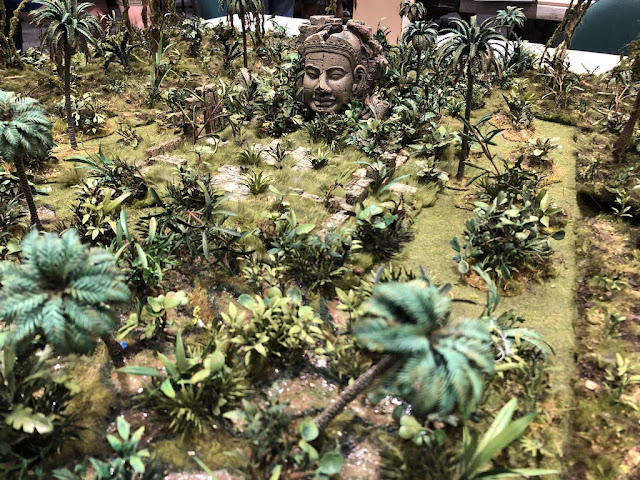 This year I could only attend for a day and the Chain of Command event was the main attraction for me. For many years I played in the Advanced Squad Leader tournament, winning it a couple of times, so it was good to look into a room full of familiar faces and say hello. And of course it goes without saying that no visit to a major gaming event is complete without visiting the numerous traders and parting with a bit of cash.

This year's Chain of Command event had a Pacific theatre theme and as always John Bond worked his magic to produce some spectacular terrain and without doubt the best tables at CanCon. I've photographed a few of them, but my favourite was this quite marvellous piece of jungle, resplendent with temple. 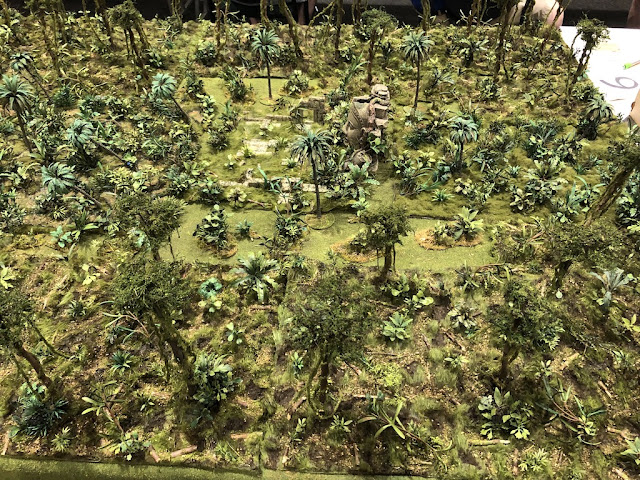 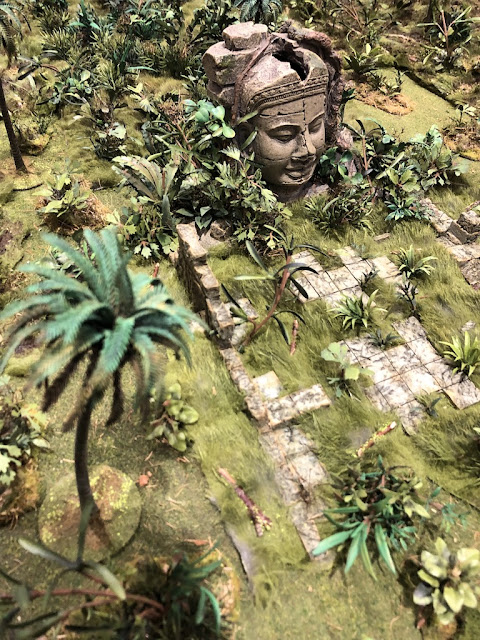 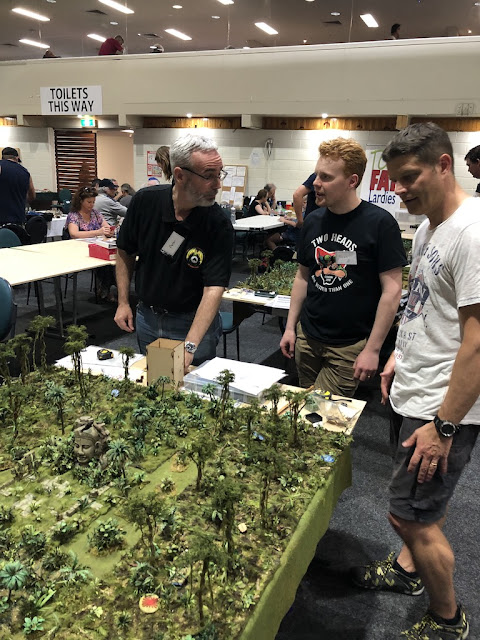 What I admire about John's work is his ability to balance realism with playability. For all the dense appearance of the table it was very well thought through and never appeared to get in the way of playing the game. Having said that, he may have over succeeded in one aspect - it was easy for the figures themselves to blend in with the landscape and almost disappear. 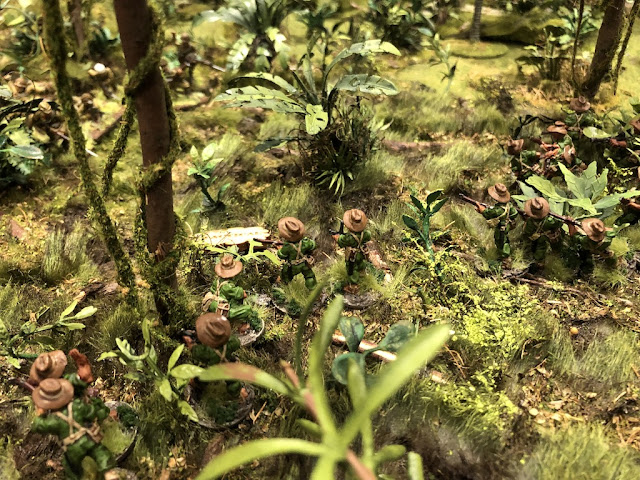 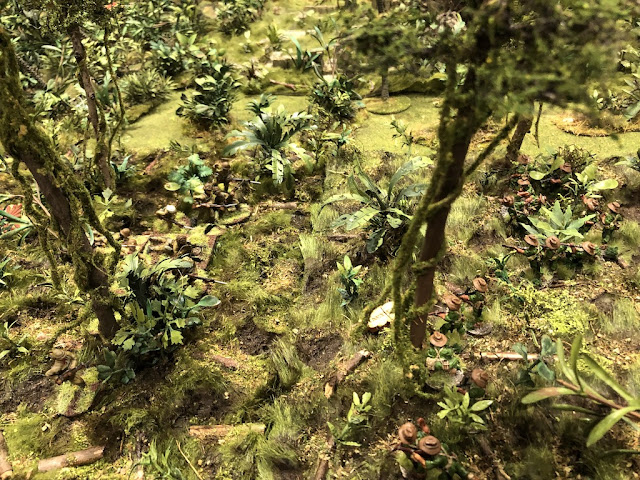 Having made some paddy fields myself recently I was interested to see John's creations. He made up a great table of a small hamlet set amongst flooded paddy fields and it worked very well. Nothing fancy or complex in their creation John told me, simply a paint job and then a coat of gloss varnish. Simple, but brilliant. 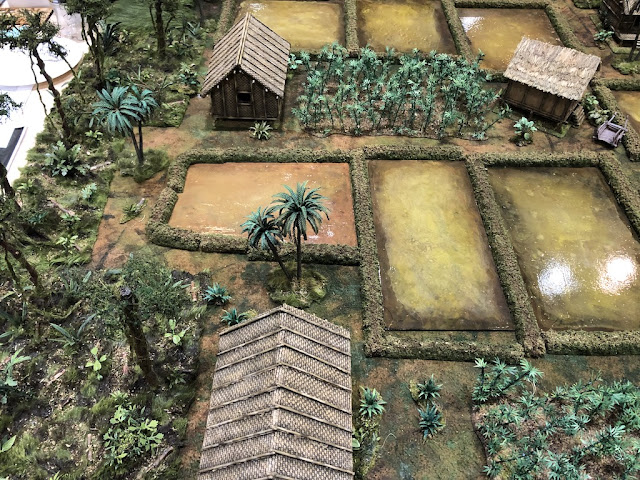 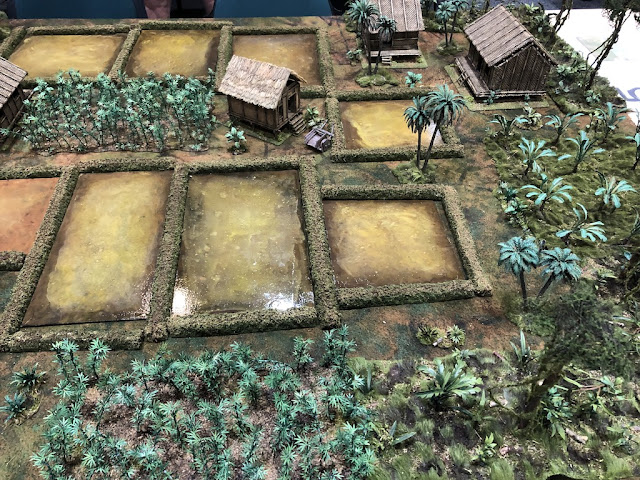 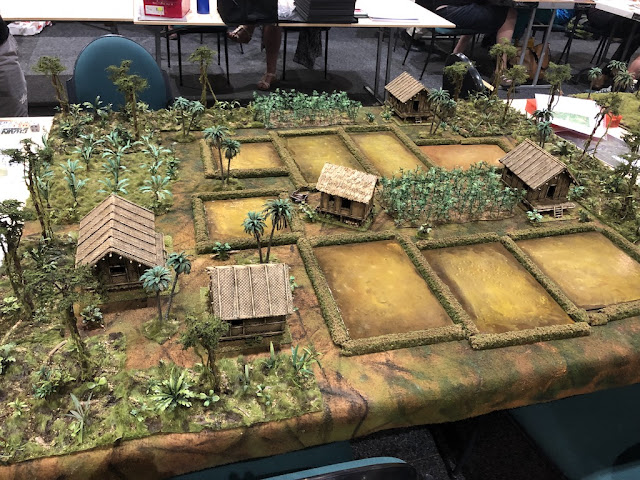 And once again they worked very well in the context of game. 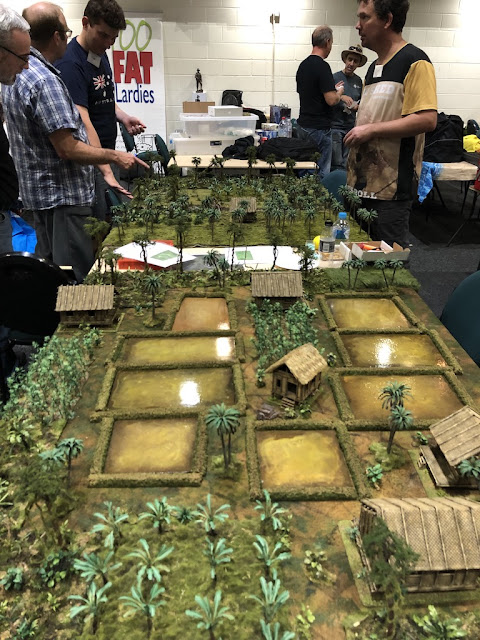 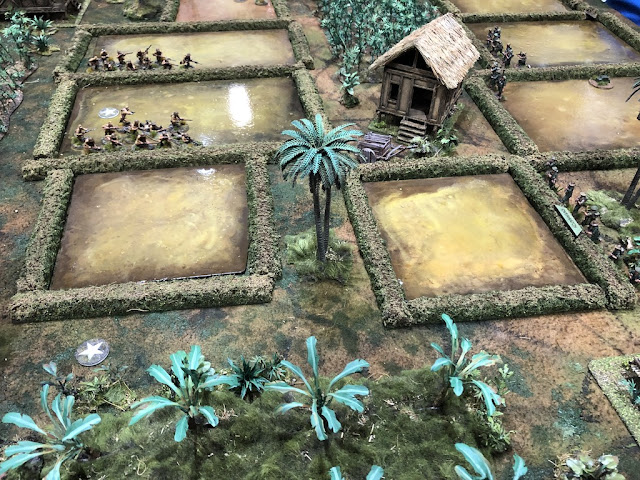 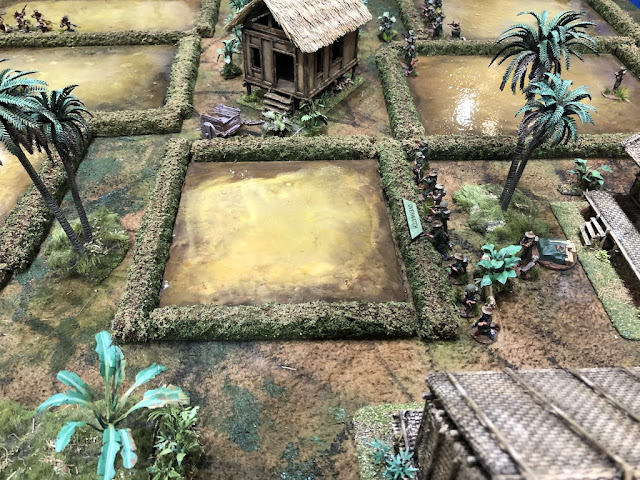 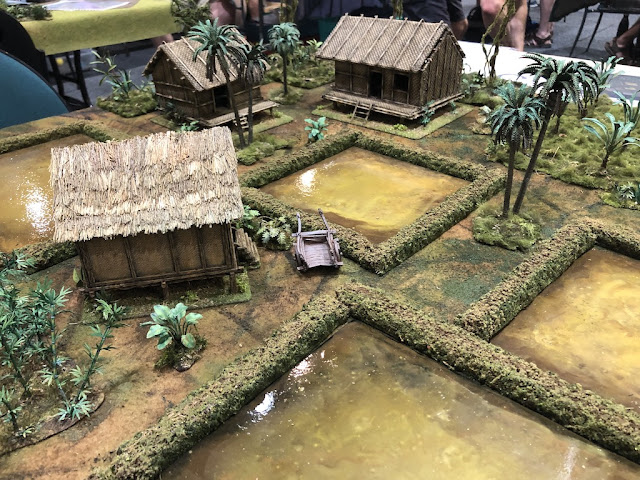 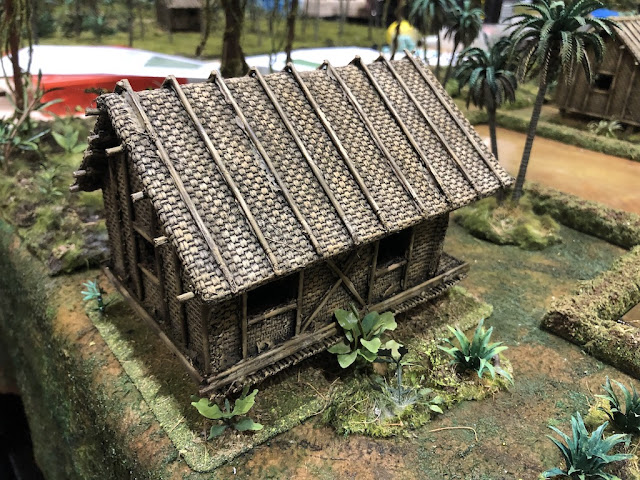 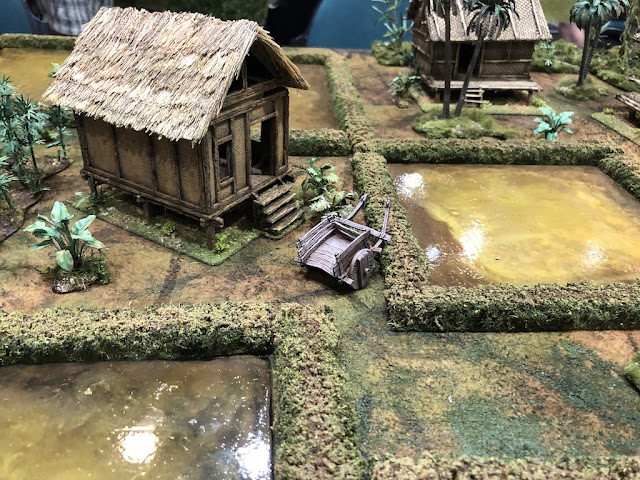 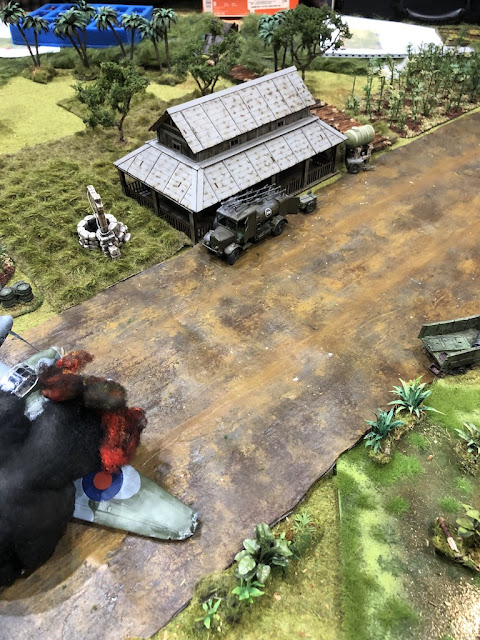 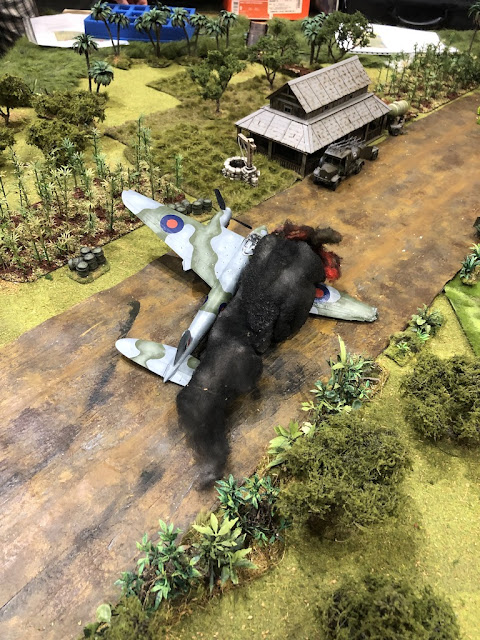 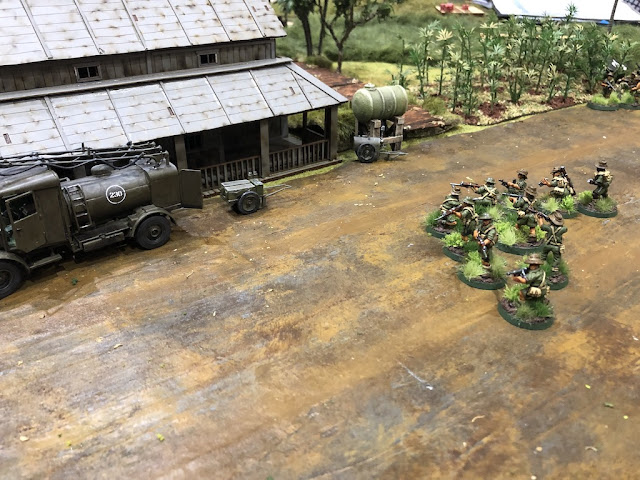 Last but not least, a stream set amongst plantations, all looking suitably hot and atmospheric. 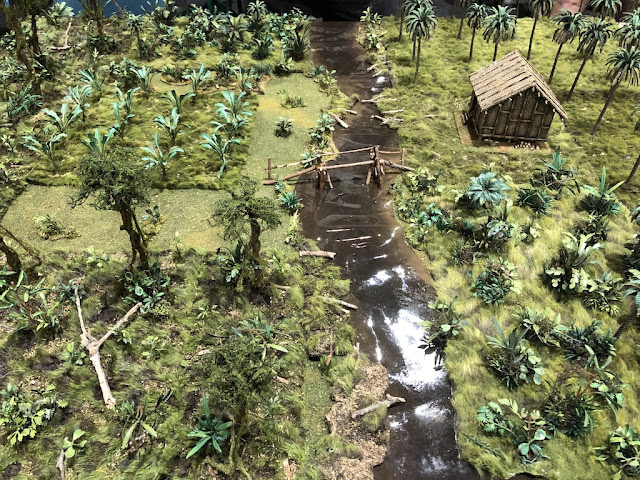 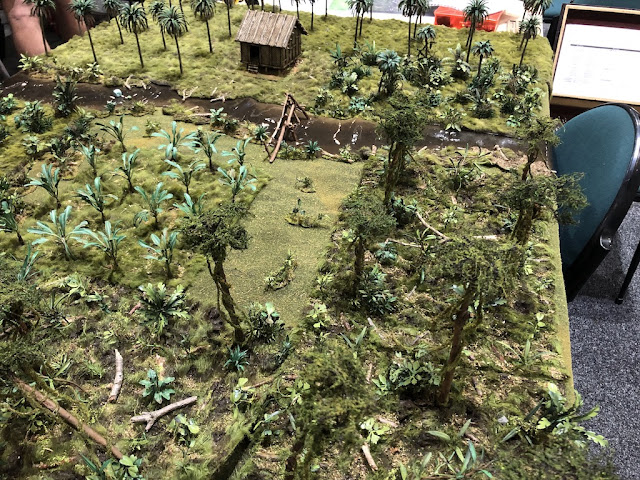 Dave (my regular CoC opponent for all of the CoC Pint Sized Campaigns) and I also had the chance to meet Len Tracey, the former commander of the Australian Army Jungle Fighting School and the author of the Malaya 1942 campaign that we finished playing recently (AARs start here). Len is working with Rich Clarke on the forthcoming Far East handbook for Chain of Command and gave us some very interesting insights into the research he had been doing. After our Malaya campaign and seeing these tables I have to say it has really whet my appetite for playing games in this theatre and I'm really looking forward to seeing the Far East handbook in print.


By the way you may be wondering what the yellow balls are that Dave and I are holding. These were given to us by Steve McGuigan, organiser of the CoC event, and they are TooFatLardies branded stress balls. Steve handed them to us with the invitation to 'squeeze the Lardies balls', not the first or the last time that joke will be made I suspect. While you come to terms with that unappealing mental picture I should just mention that Canberra laid on a blazing hot summer's day, as it can do from time to time in January. The halls at CanCon struggled to keep the heat down, but I suspect it was a losing battle. Cue your joke of choice about gamers and their personal hygiene habits, or lack thereof. 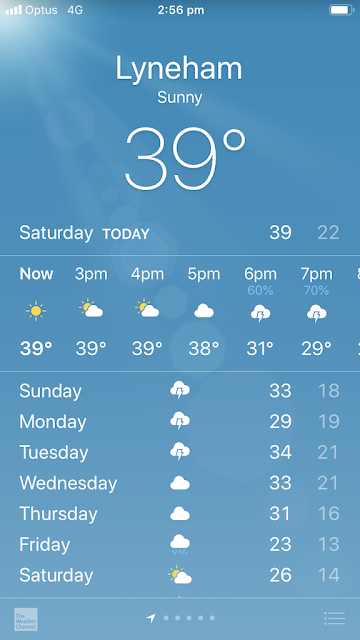 Posted by The Tactical Painter at 13:34