The Road to Bremen - Scenarios 1 and 2 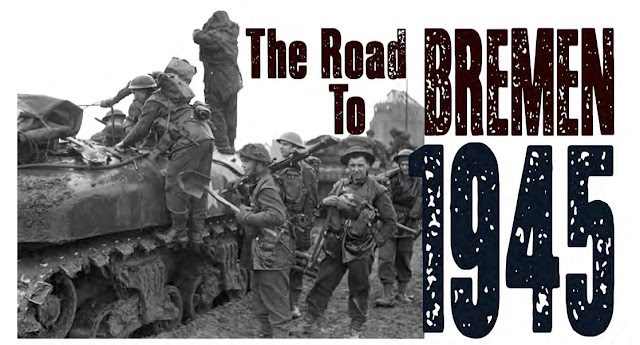 The Road to Bremen is a Chain of Command campaign that was published in the TFL Christmas Special 2017 and focuses on the British drive to capture Bremen in April 1945. This is an interesting looking campaign that features a high degree of uncertainty not least for the German player. With the end of the war in sight there is a good chance some of the German units will simply allow themselves to slip into the POW cages without actually fighting a scenario (in game terms that's decided by an 'Endkampf' die roll). That said it also presents the British player with uncertainty. How many scenarios will feature German surrenders and how many will feature a fight? With only three platoons, the British player needs to be careful to ensure he has troops in hand should this become a drawn out campaign.

I've elected to play the Germans. To be honest I like the challenge and it will be good to see how my mixed bag of units perform. The Heer units (two platoons) have a 50/50 chance of surrendering, so are the most unreliable. The Volkssturm have a 33% chance of surrendering, but as Green troops and only a two squad platoon, they are unlikely to offer a stern resistance. Which means much hinges on the two platoons of Fallschirmjager who only have a 16% chance of surrendering and should offer the toughest fight. There are some very useful supports available from Pak 40s to an anti-tank ditch, and while these will be lost should the troops defending them surrender they add some punch to the defence. From Turn 5 the Germans are able to roll for additional support and there's some very useful kit - from additional squads to a Hetzer, however nothing is guaranteed.

The German player must allocate his available units and the supports to specific maps prior to the start of the campaign. Once set they must remain on those maps so it's important the German player develops a plan for his defence. If the defending unit surrenders so do any support units and all static defences are lost. To keep an element of fog of war the British will roll 1D6 prior to arrival at each map to determine if any defending units surrender. Based on the result the Germans will advise the British of the outcome and we will progress from there.

There are no dramatic scenario names in this campaign, we will simply progress from maps by number. So we start at Map One, a small village set among wet fields where AFVs are liable to bog down.


This seems like a good defensive position. Any British vehicles will want to stick to the road, so the village itself is good ambush terrain amidst sturdy stone houses providing hard cover. I decide to place mines on the road and post a Heer platoon, supported by a Hitlerjugend tank killer team to defend the village. If the mines don't force the vehicles into the muddy fields it will hold them back from the village and perhaps separate them from their supporting infantry where they may fall prey to my tank killer teams.

As the British approach the map we roll the Endkampf die roll. It's a six, a very definitive result - the Heer want no more of the war, their weapons are neatly stacked and they meekly enter captivity. The Hitlerjugend lose their will to fight at the sight of this and join the surrender.


Well that was over quickly and bloodlessly, it isn't all going to be like this, is it? With the Germans offering no resistance the British have the opportunity to make haste and swan further up the road to Bremen, but the Swan roll is only a two, which means the British spend a turn consolidating their hold on the village and ensuring there are no more Germans lurking about.

That's not a bad result for the Germans. I've lost a Heer platoon, but that was always likely to occur to one if not both platoons, yet the British have been unable to capitalise. I haven't been able to cause any British losses, but every delay means I have a better chance of consolidating the defence closer to Bremen.

With that we move swiftly on to campaign turn 2 and Map Two. Here the terrain was fairly open and short on good defensive terrain and so I decided to deploy one of the Kriegsmarine Supermines in the hope of causing casualties and further delay.


The detonation roll could not have been better, it's a five, destroying a Kangaroo and a full section of infantry.


That's about the worst possible result for the British player. Not only has he lost a full section, his advance comes to halt for the turn. I feel that partly compensates for the surrender of the Heer platoon and the halt means each map so far has cost the British one campaign turn.

Without any combat the campaign moves on and the British now stand adjacent to Map Three, a river crossing and a good defensive position.


I've allocated this to the second Heer platoon and they will be supported with a Hitlerjugend Flak 38 team. I've also given them some wire and mines to help impede British progress. However a plan is only going to be as good as the men who defend it. So, would this Heer platoon crumble and surrender, or decide to make a stand for Fuhrer and Fatherland? An Endkampf roll of one, says very definitively that this platoon are prepared to fight. We have a game and so we go to Map Three and recreate it on the table.

Posted by The Tactical Painter at 14:50