This is an update to my earlier post about the 12mm project for the Second World War where I'm aiming to have a collection that will work for company and battalion level actions across several rule sets. These include Crossfire; I Ain't Been Shot Mum (IABSM), and the newly released O Group. At the moment the project is focussed on a German and British force for Normandy.

The first task was to complete the stands for the core platoons and companies. In the picture below you can see a group of German bases that could be used as a company for either Crossfire or O Group where one stand represents one squad. Alternatively it could be a platoon for I Ain't Been Shot Mum where the figures are represented at 1:1. As I want to remove individual casualties for IABSM I have some bases with three figures and some with two. I have also made up a handful of bases with a single figure (not pictured here) and they serve as the 'loose change' to make the appropriate adjustments for casualties. The only difference between the platoon and company would be to replace the company commander base with an individually mounted figure for a platoon commander (a Big Man as the IABSM rules like to refer to them). 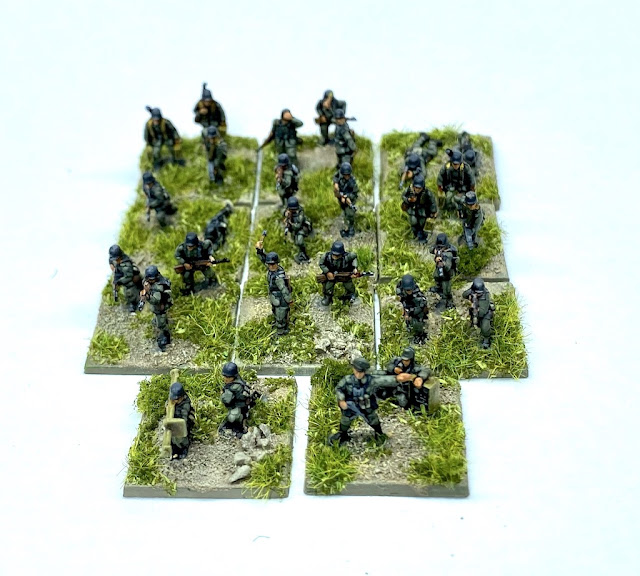 To these core platoons and companies I've been adding various support units and HQs. O Group doesn't require the battalion HQ to be present on the table however it is useful to have a place to record the number of HQ orders that are available to be issued by them. I've followed a similar practice for the HQ as I have for off-table mortars and artillery - in effect a mini diorama that features a micro dice that records the fire missions (in the case of artillery) or HQ orders (in the case of the battalion HQ). Below is the German mortar/artillery base plus HMG, company commander and panzerschreck stand. 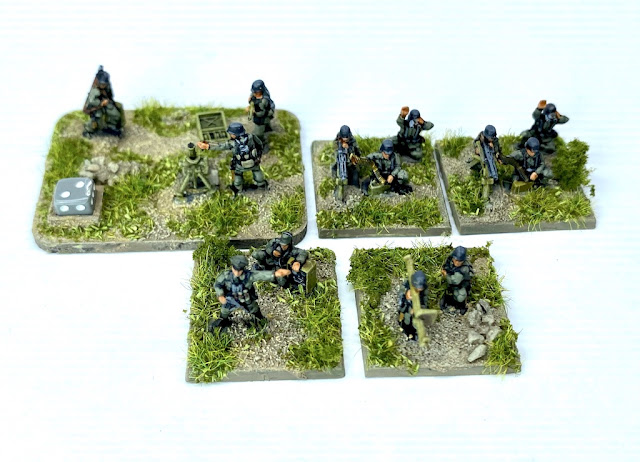 The HQ stands feature a suitable grouping of figures around a map table. This is the British HQ with the mortar/artillery base behind. 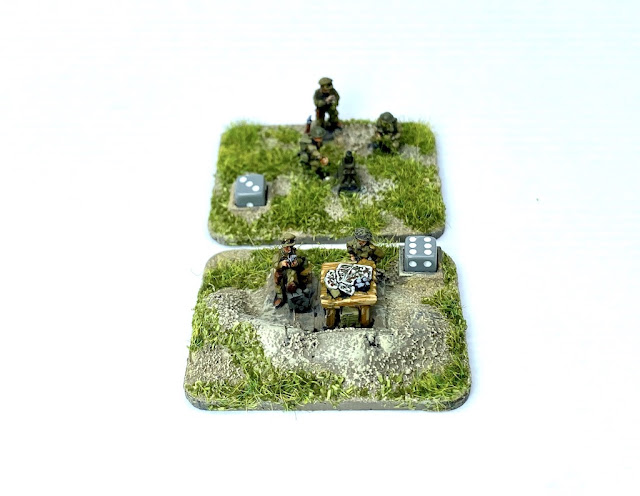 Here is the German HQ. The sandbags were scratch built from Milliput. 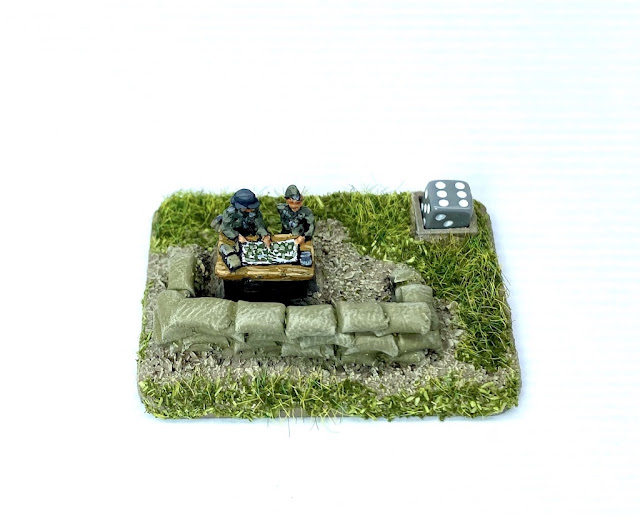 Below we have the core battalion command elements with the British artillery and HQ stand plus the three company commanders and a forward observation officer. 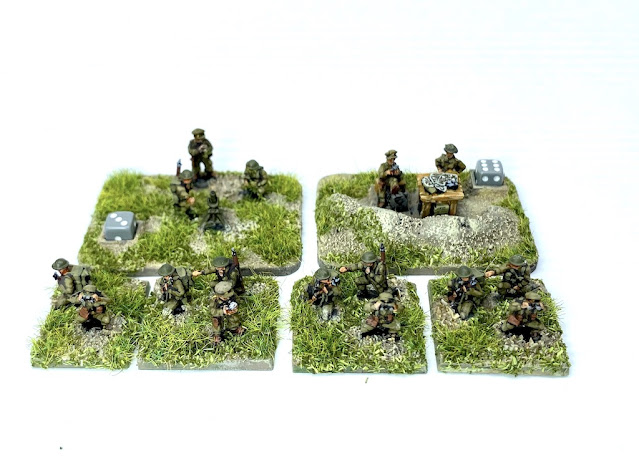 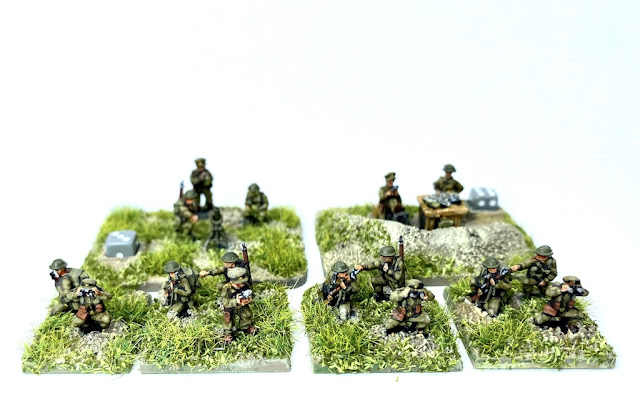 Both IABSM and O Group feature an introductory scenario in the main rule book and so I have focussed on putting together all of the units that I would need to play those. With that in mind I've added the most common anti-tank guns. Where as the infantry are from Victrix these support weapons are from Pendraken (as are the battalion HQ figures). While the sculpting style is very different from Victrix the sizes match well and at this scale I don't think the differences are even noticeable.

The British have 17 pounders and six pounders. 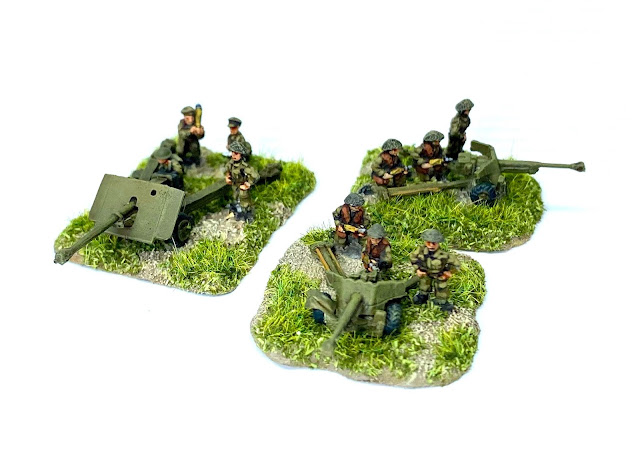 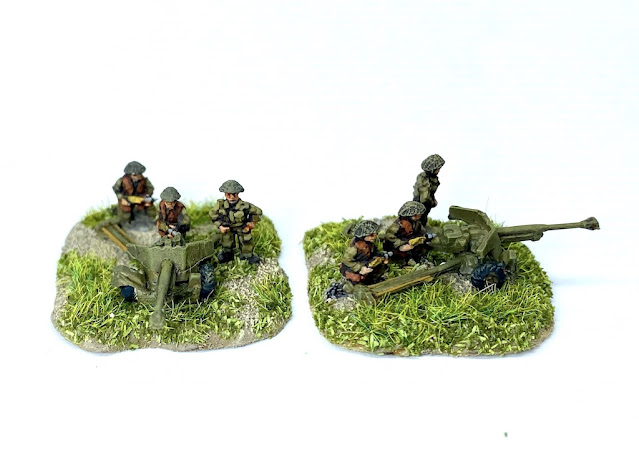 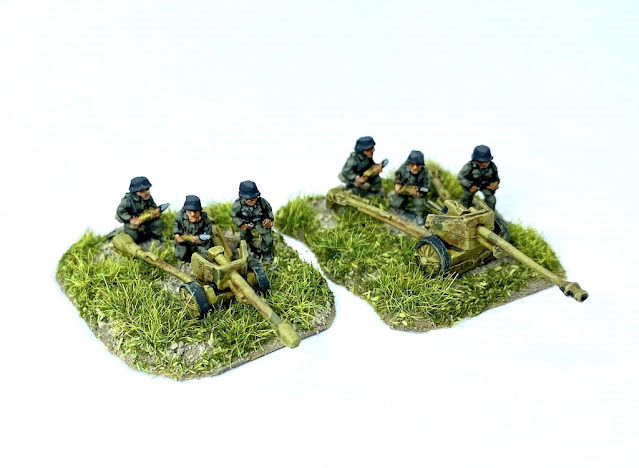 I'm still adjusting to painting in this small scale and while the 12mm (1/144 scale) tanks are a reasonable size, something like a Universal Carrier is another matter. Painting the passengers was an interesting task but I keep reminding myself to paint for the table not for a close-up photograph. 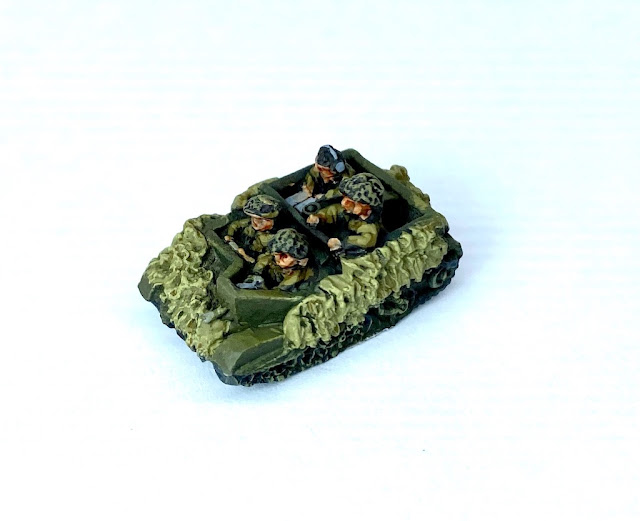 The various AFVs I covered in the earlier post but here are a few photographs anyway. 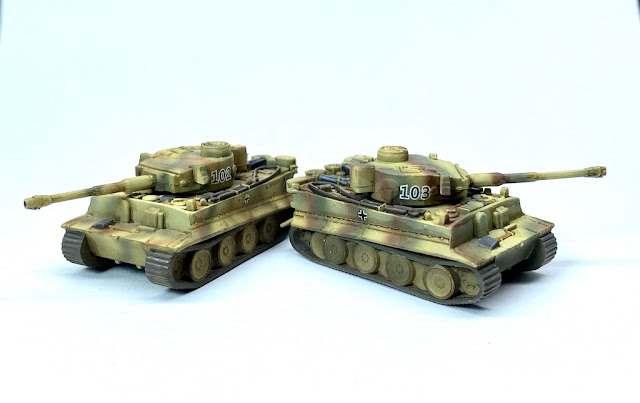 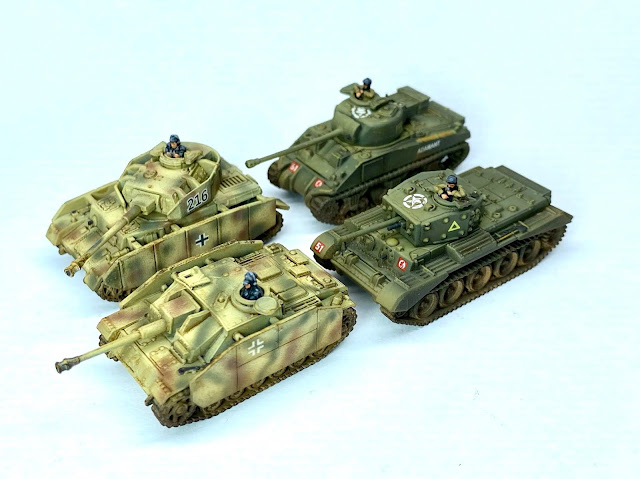 That now gives me all the figures, guns and vehicles I need to start playing the introductory games. However (there's always a 'however' in this hobby isn't there?), I will need terrain before the miniatures can get into action and finalising that is the next stage of the project. I have already been experimenting with scratch building some ruins with foam core. This one was quick and easy to do and so for now I plan to make up all the buildings I will need this way (more on how I make these in a future post). 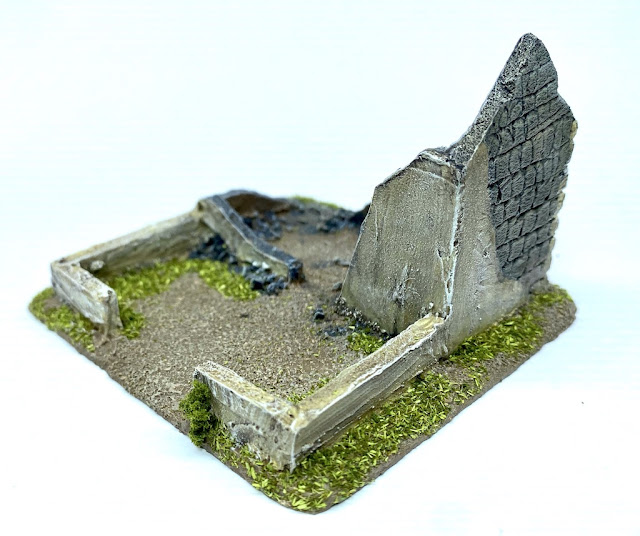 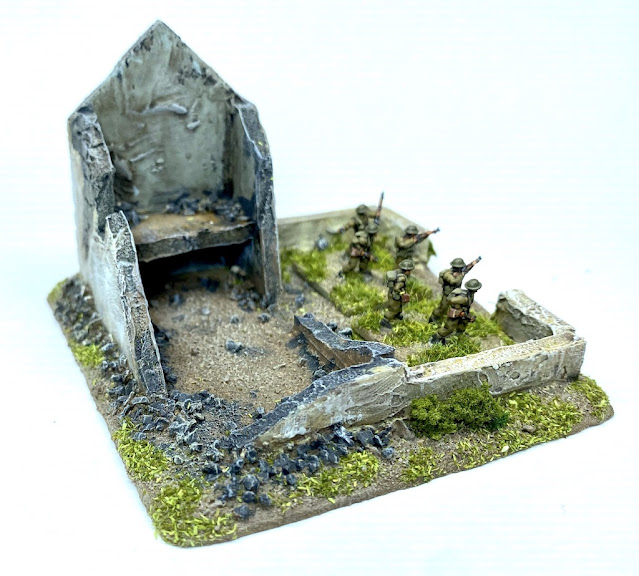 I'm also experimenting with various pieces of my existing terrain to see what might work at this scale. These grain fields were made with 20mm in mind. They've seen action in 28mm, but could they pass in 12mm? Hmmm, perhaps. 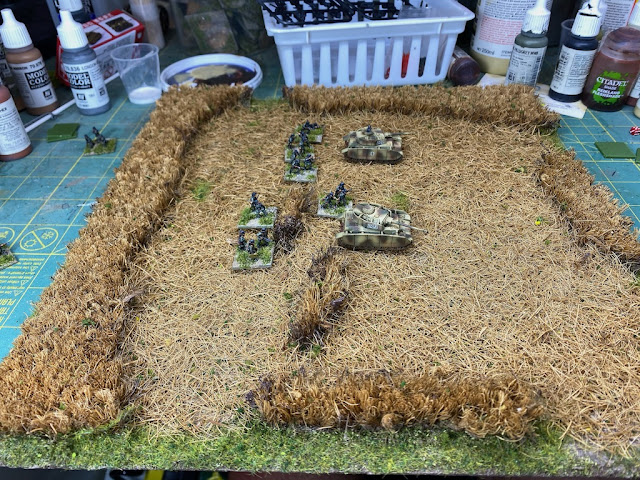 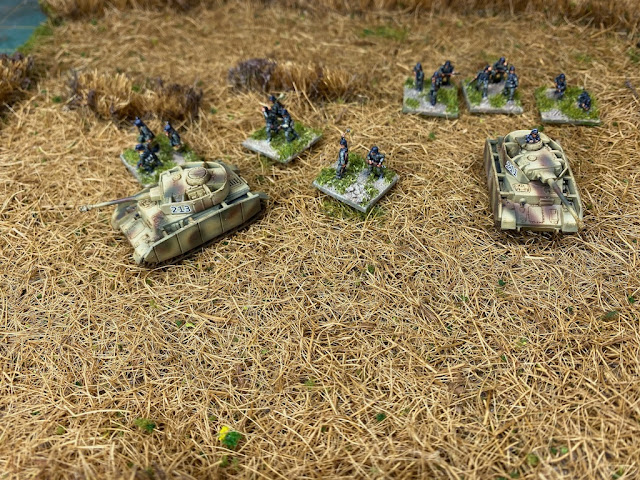 Posted by The Tactical Painter at 16:53

A guide to following the Bloody Bucket campaign

As the Bloody Bucket campaign for Chain of Command has a slightly different structure than usual I thought it might be useful to have a guid... 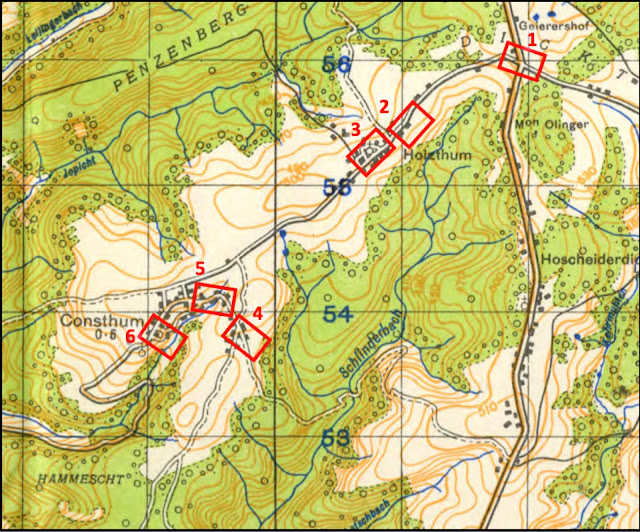