It's been too long between games of Sharp Practice, so I was particularly disappointed to miss a game set during the Indian Mutiny that was held at the club only a couple of weeks ago. The good news was that I remedied that by convincing the same group to play 'She was only the Magistrate's Daughter', a scenario set during the American War of Independence from the 2020 Lard Magazine. 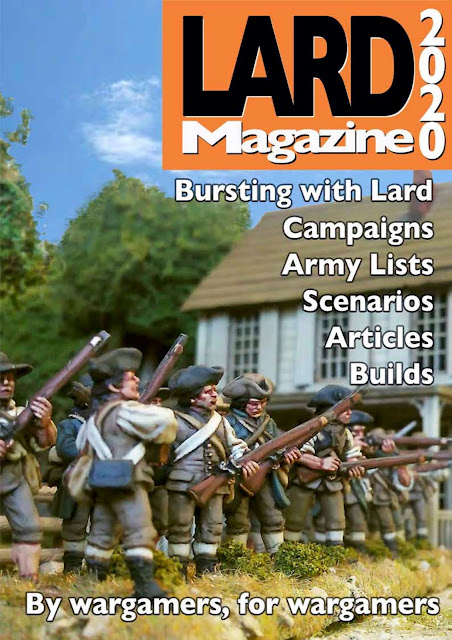 In the lead up to the game I took the opportunity to finish off a few terrain pieces that I would need. One is a small house with brick chimney from the Sarissa range which I had bought for games such as this. The other is Sarissa's larger plantation house which I made about two years ago, but ever since completing have wanted to make a couple of changes. 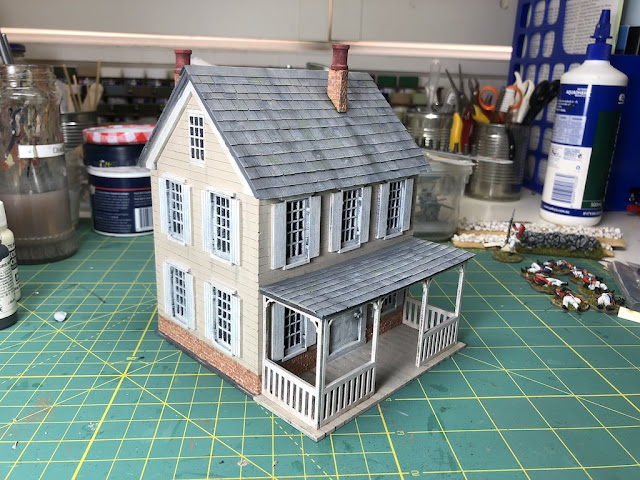 I never liked the original chimney pots and I thought it could really benefit from a small base. There is something about putting an unbased building on a terrain mat that can make it look like it's just been plonked there and doesn't really belong.

I made up simple tubular chimney pots for both from Milliput. I had used embossed wallpaper with images of bricks for the plantation house and used exactly the same for the smaller house. It adds a very effective bit of detail for very little effort. 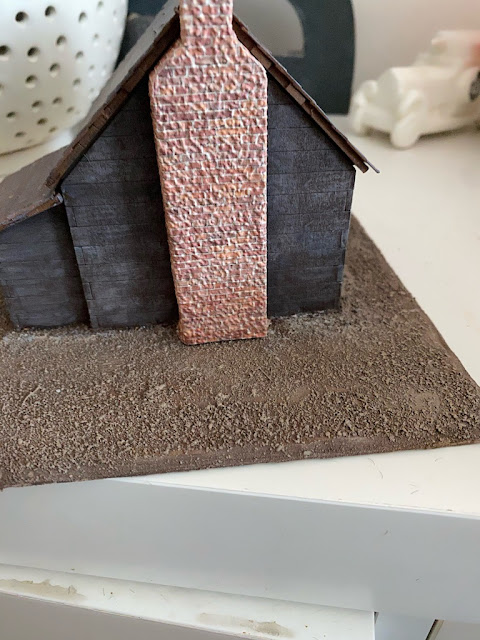 The base made a significant difference to the finished look of the plantation house and I was much happier with the chimney pots. 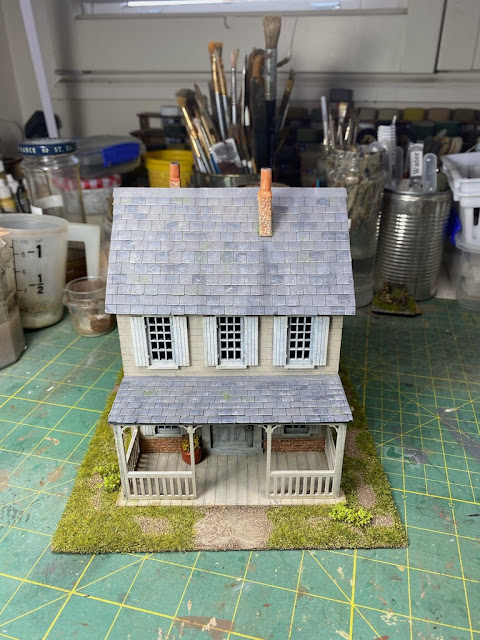 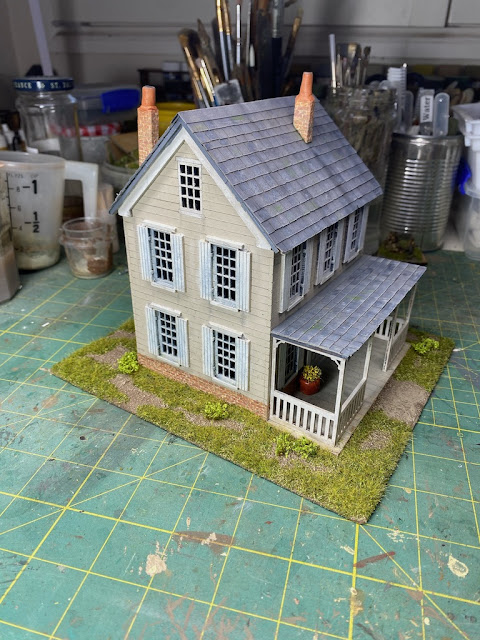 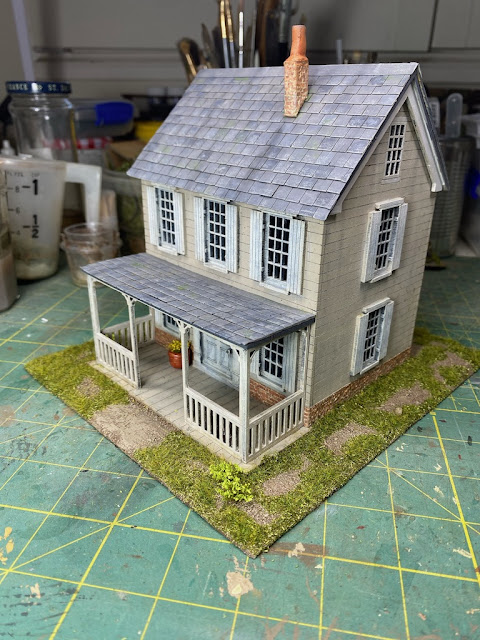 I was also very pleased with the end result on the smaller house. A few small details like a wood pile and old wagon wheel helped to add character. 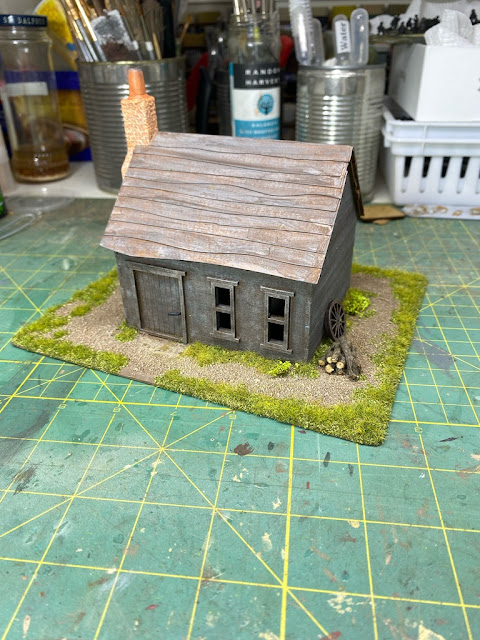 The embossed brick chimney breast has worked very well and I think part of that comes from increasing the depth of the entire chimney. I did that by cutting a piece of cork floor tile to the same shape and attaching that before I added the wallpaper. The added depth gives a more substantial look that puts the chimney in better proportion to the rest of the house. 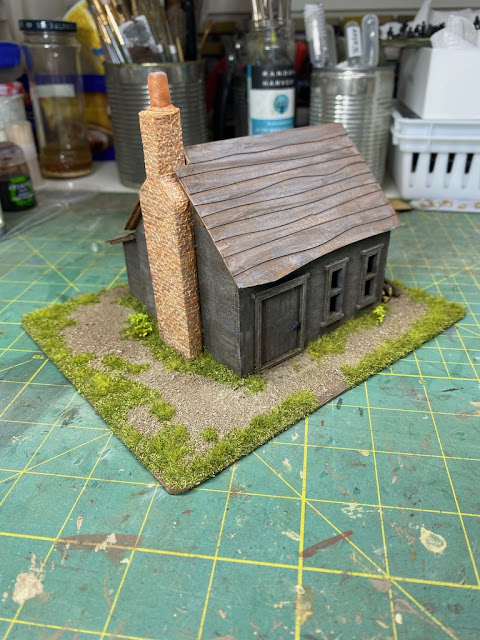 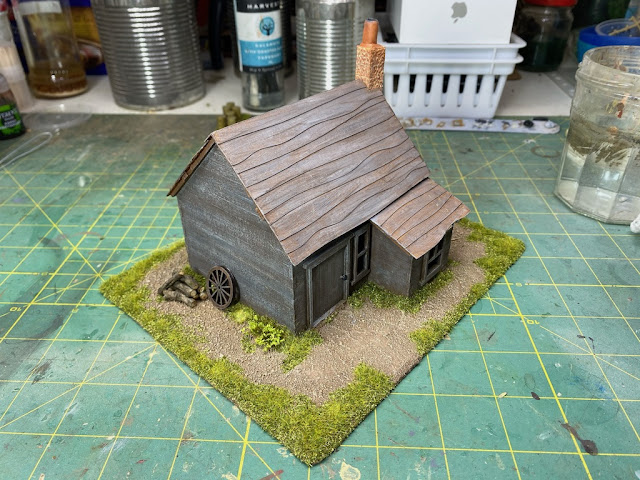 Looking at the  scenario I realised I would need a movable deployment point for the Americans. I've been meaning to make proper deployment points for some time now. So far my only attempt has been one for the British but I made the mistake of mounting that on a base that was a little bit too large to be practical. I haven't even made one for the Americans and I've been using a small tent from the Renedra set to fill that role. For the movable deployment point I decided to use a 40mm round base, a much more practical size, and to populate it with a couple of the figures in hunting shirts from the Perry plastic Continental Army set. I think they do a good job of looking like local men who might know their way around the area. 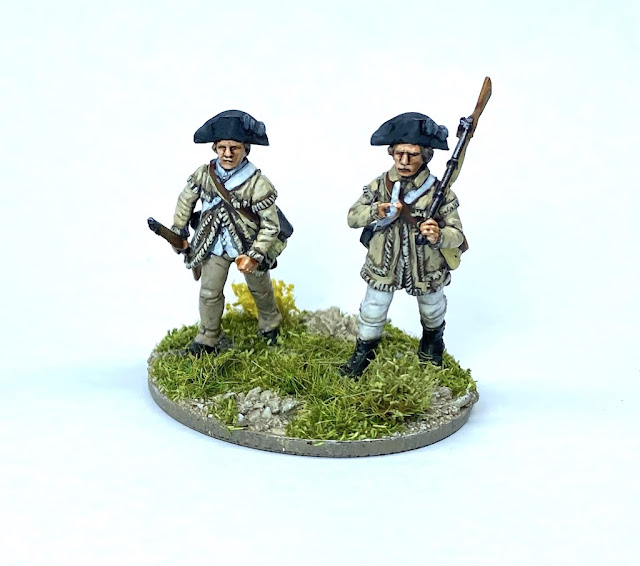 While I was at it I decided to modify my British deployment point. Aside from the original being too large I had also made the mistake of featuring a bell tent from the Renedra set, which turns out to be wrong for the time period (it's too early for their use). So with two good reasons to make a change I rebased the figure and campfire onto a smaller 40mm circular base to match the size of the movable deployment point. 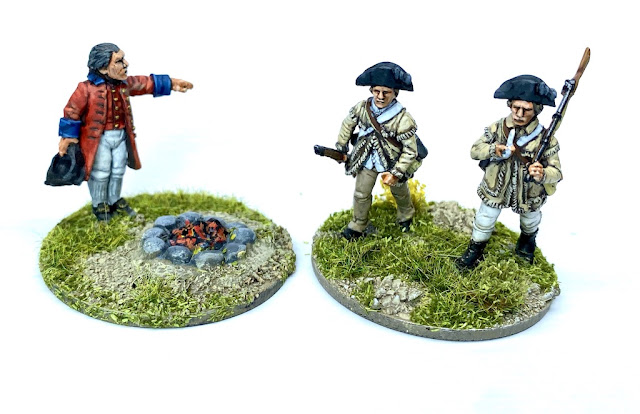 The scenario features two groups of eight loyalist militia. At the moment the only loyalist figures I have are twelve of the Perry Queens Ranger riflemen. My initial thought was to use these and simply add four British regulars to make up the numbers, but I was never convinced that was an ideal solution. 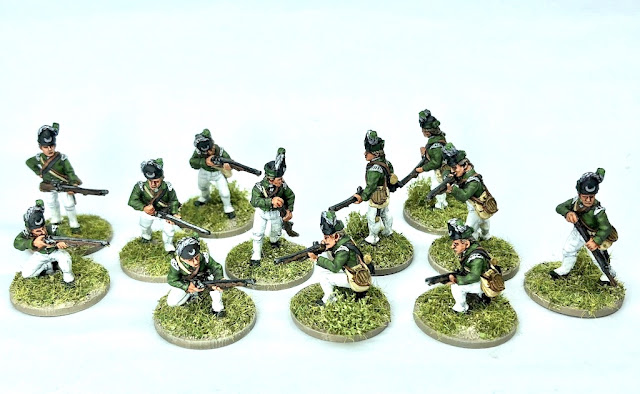 I've been meaning to make up figures for a loyalist regiment and so I took a tip from the excellent Tarleton's Quarter blog and made the figures using the Perry plastic sets. The bodies come from the Continentals, with the arms with muskets at the trail and roundhats from the Perry British regulars set.
I was planning on doing enough for sixteen of these and one leader until I discovered I had only seven 25mm round bases left (a small crisis and order now placed!). In the end my solution was to mix up these new figures with the Queens Rangers and while they don't match exactly at least their uniforms colours are similar. 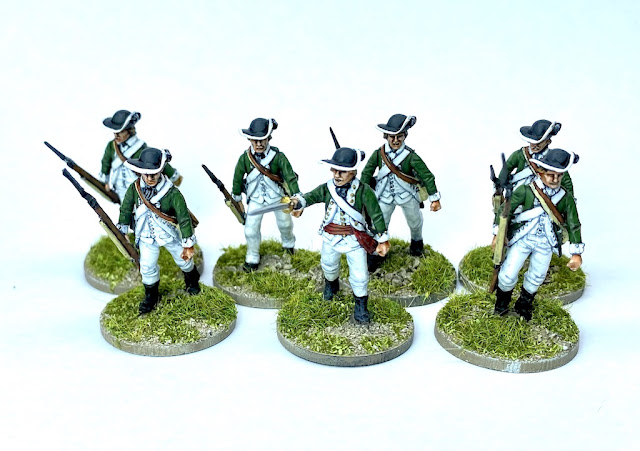 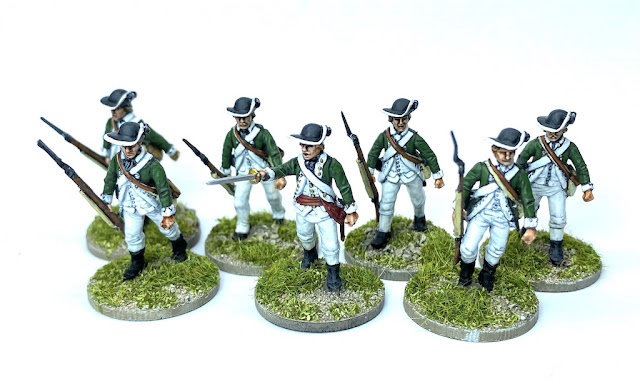 Knowing that a couple of the players were not familiar with gaming this war I made up a few quick reference sheets specifically featuring the units for this scenario. These are based on a set I made earlier, so it was easy to make modifications. The sheets include information from the unit rosters plus any other relevant rules. The idea is that players have all the information they need to play their unit in a single place. A good example is the British light infantry who benefit from a number of special rules like a bonus move activation; evade; tomahawks and interpenetration. I find it saves players flicking back and forth through the rule book trying to find the relevant rules and that helps keep a game flowing.

I design them in PowerPoint. I've embellished them by cutting and pasting a few of Don Troiani's lovely period pictures lifted off the internet (but please note these are subject to copyright and I've only done this for my own personal use). 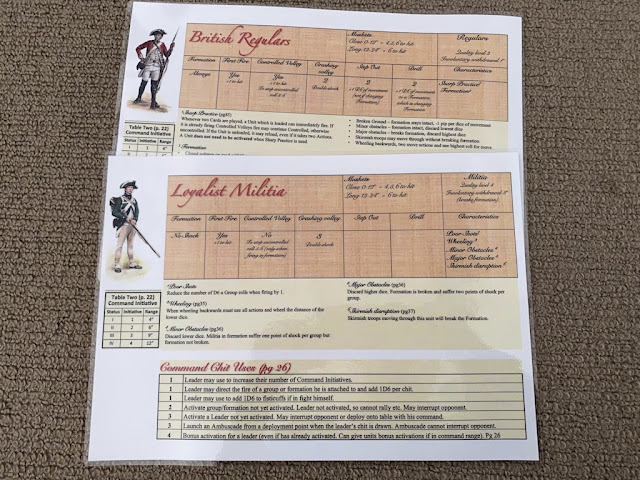 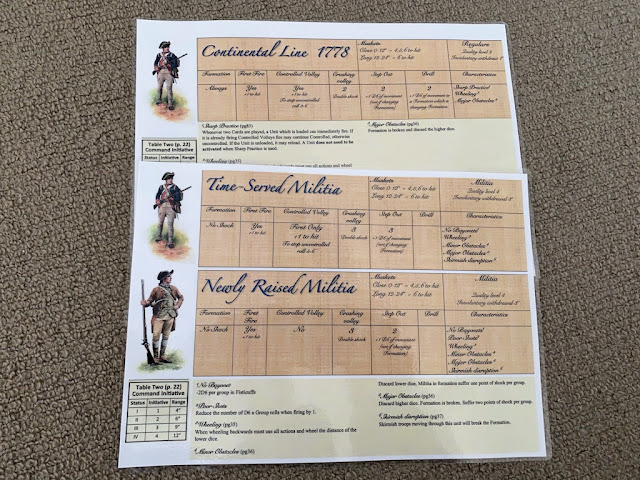 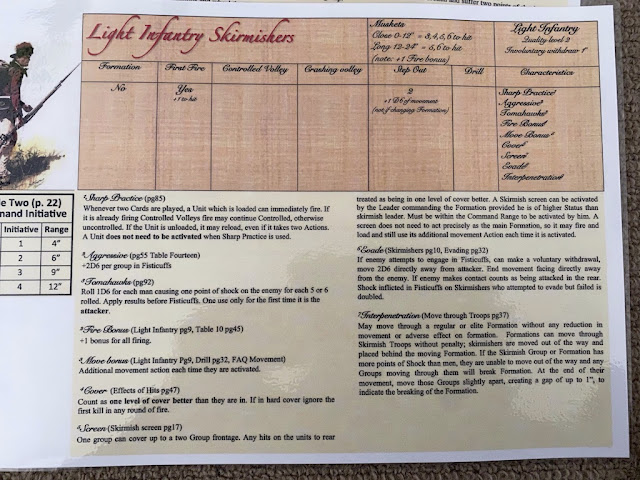 With that all done we had everything we needed to run the scenario at the club. It's worth mentioning that for myself and regular opponent Dave playing at this club is a relatively new thing for us. On the upside it's introduced us to several rule sets we might not have tried and a great bunch of fellow wargamers. That said we've also discovered the majority don't seem to like rules from the Lardies. Dave and I are not quite sure why because generally they all seem to like a bit of friction in their games (which is one of those things that can put a lot of people off Lardy rules). Somewhere along the way they've had a couple of experiences that have left them unimpressed. I'm hoping we can convince some of them to give the rules another shot. If we can be successful then it will be important that the games we run are well organised and play smoothly. That's where I hope the reference sheets will prove handy.
The Magistrate's Daughter scenario has been well designed, not least because it gives both sides plenty to do. Forces are relatively small with only four American leaders and three British. In our case that certainly helped to keep the game moving at a good pace and we had no problem finishing the game in an evening (something the others had complained was not possible in their previous Lardy games).
The plantation house was going to be a focal point of the game as that's where the magistrate's daughter and her mother are holding out and so it was good to have it looking the way I wanted. 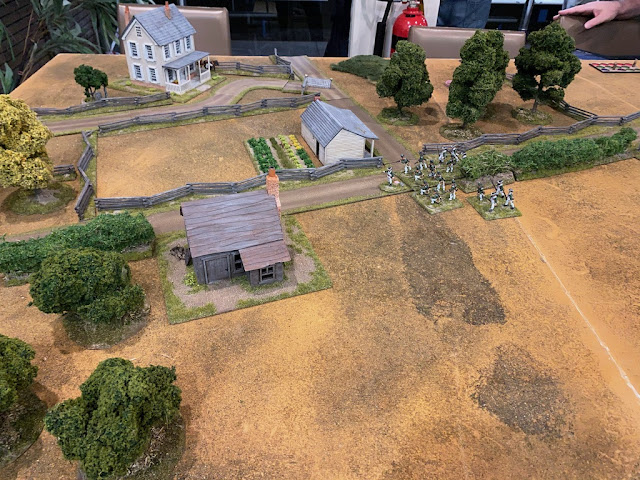 Dave and I took the Americans and managed to start briskly with the militia sending one group to the plantation house while the other group and the light infantry tried to hold off the loyalist militia with musket fire. 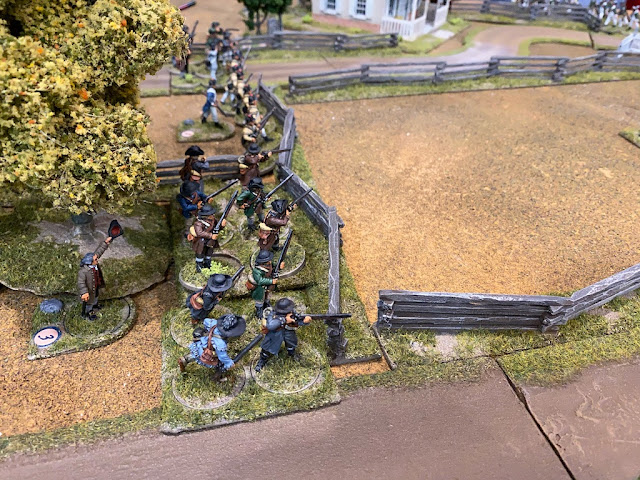 The loyalist militia had decided the quickest way to the house was by marching in closed column along the road. While that was certainly a fast way to move it meant the column would show its flank to the rebels. That was not a wise move. The rebels capitalised and opened fire, inflicting a fair amount of shock. That in turn made it difficult for the loyalists to be in any sort of order to climb over the high split rail farm fences until their solitary leader had rallied some of that shock.
The British light infantry rushed to the support of the loyalists but found themselves crossing open ground faced by the American light infantry and that led them to seek the cover of a nearby patch of woodland. 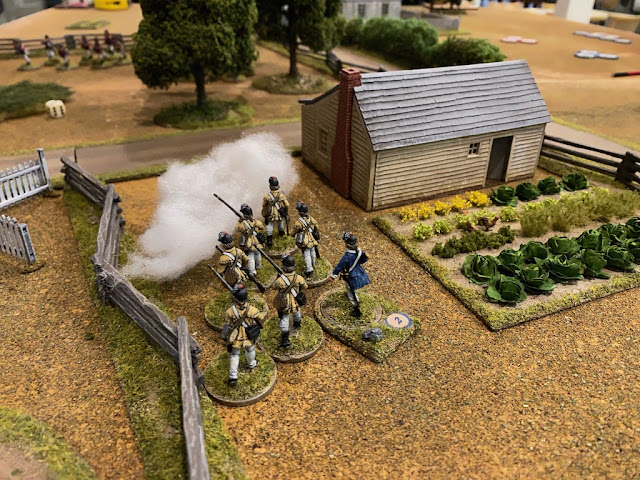 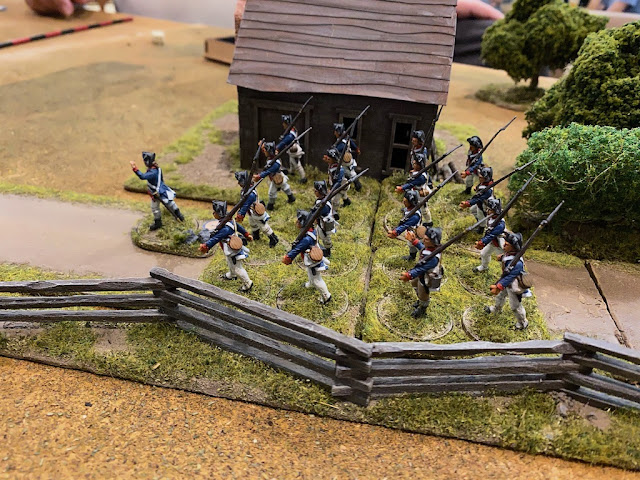 This meant the main action around the house was between the two opposing militia. This is where the loyalists paid a price for the high amount of shock, as they spent an inordinate amount of time trying to clamber over the fence (rolling two successive 1,1 for their movement). That left them milling around. The rebel militia leader ordered most of his men to fire on them while sending two men to smash down the door of the house and find the two women. 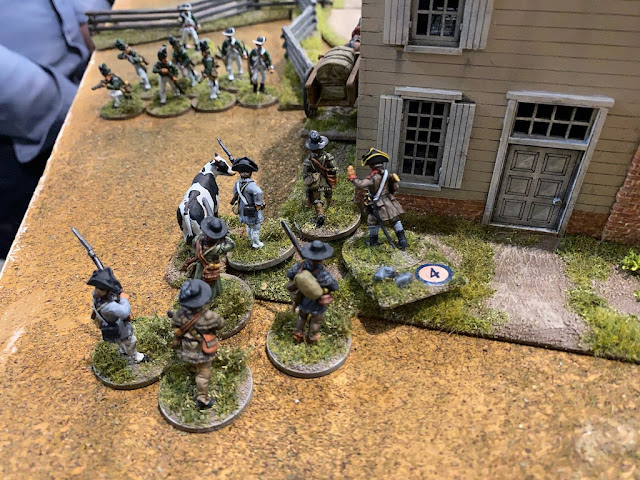 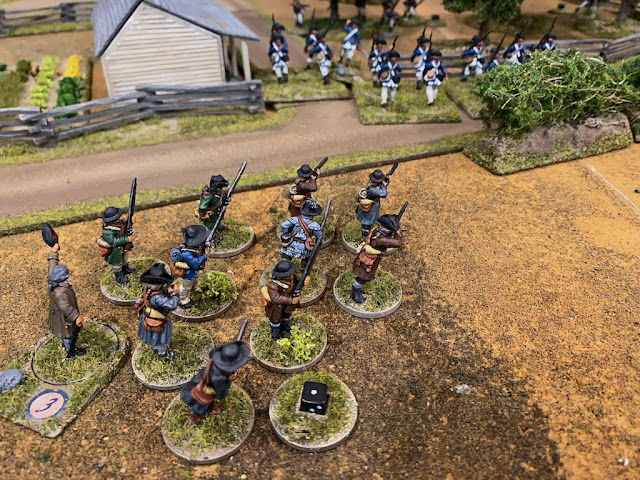 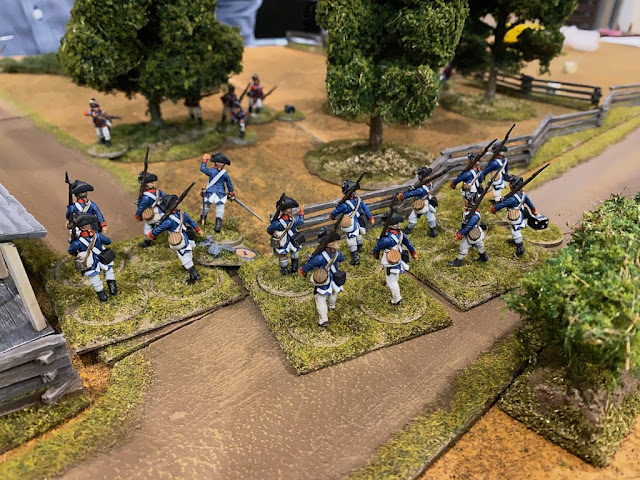 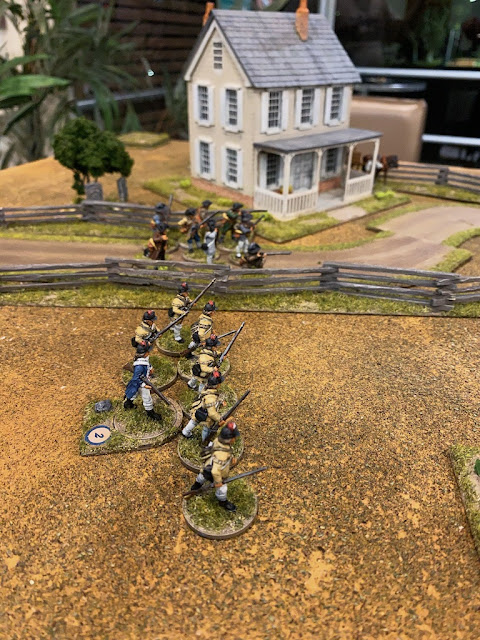 When the British regulars did make an appearance their commander was intimidated by the presence of the Continentals in the road. Unwisely he decided to make a wide flanking move when he might have been better moving as fast as possible toward the sound of gunfire and showing the rebels the glint of British steel.
As a consequence the British light infantry received a volley from the Continentals and were rapidly losing men and acquiring shock. Taking advantage of their speed and aggression they charged a group of Continentals and it was enough to send them back reeling although it proved something of a pyrrhic victory given their casualties. 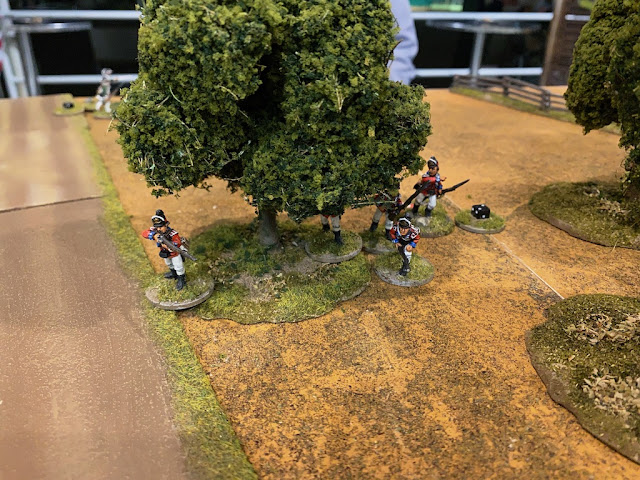 The loyalist militia were having an equally bad time of it. After suffering a number of casualties from rebel musket fire they were finally in a position to take them on in fisticuffs. Given the rebels were without bayonets this was one fight the loyalist probably expected to win, but weakened by casualties and shock they lacked the strength to drive the American militia away. With the British regulars a long way from any of the action and the remainder of the force badly mauled the writing was on the wall. At that point the British commander conceded that the magistrate's mother and daughter (and their cow Daisy) were lost to the Americans.
I think the British suffered from a lack of coordination and concentration of force. It may have been a different story had the regulars stormed down the road and driven the Continentals back (although that was by no means a certain outcome). Nonetheless it was an enjoyable game that flowed smoothly with very few interruptions to consult the rule book. Other club members seemed surprise things had moved so quickly and that we had managed to finish the game in an evening, so perhaps there's some hope they might reconsider, who knows?
Posted by The Tactical Painter at 11:52