Getting Ready for the Bloody Bucket campaign 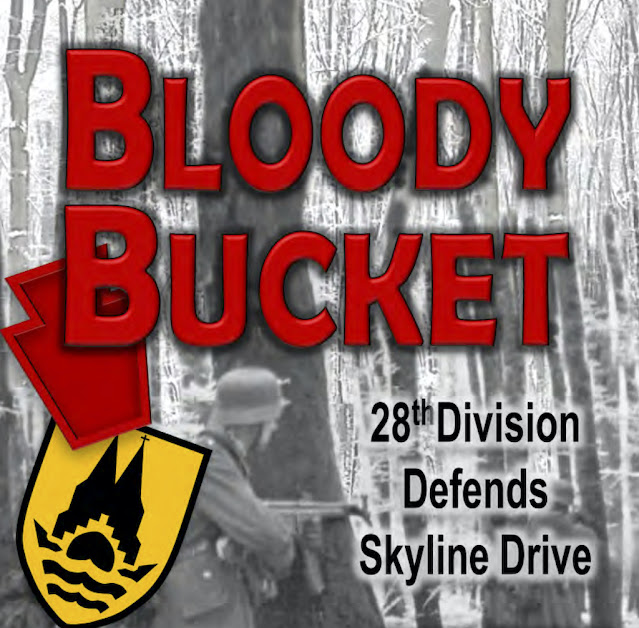 Set in the Ardennes during the German winter offensive of 1944, the Bloody Bucket campaign for Chain of Command has a lot of appeal. It's the first campaign to feature German Volksgrenadiers armed with the Sturmgewehr 44 assault rifle, a weapon I have yet to see used in a game of CoC. Secondly the campaign design itself is unusual in that it features a number of choices for both the US and German player that occur outside of each individual scenario but will impact events on the tabletop. The American player must decide where best to assign his limited assets without knowing exactly from where the German attackers will be coming, while the German player is looking to infiltate units in between maps to strike the stretched defender from different directions. This should add much to the fog of war for each player. 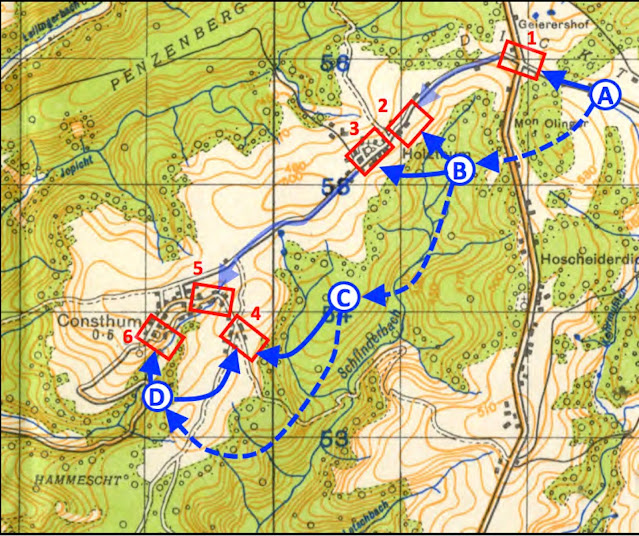 The campaign has been the perfect excuse to add Volksgrenadiers to my collection. I've chosen to go with the miniatures from AB Figures, who do a fine range in both greatcoats and reversible winter camouflage that are ideal for this period of the war. In addition they offer figures armed with StG44 assault rifles and bolt action rifles, which will allow me to make up Volksgrenadier Sturm platoons with the assault rifle and regular Volksgrenadier Rifle platoons with bolt action rifles and machine pistols.

At this stage of the war it is not uncommon to see photographs of German infantry in a mix of uniforms, even within the same unit, and so I intend to mix up the Volksgrenadiers between those in greatcoats, those in camouflage suits and some regular infantry uniforms. The camouflage winter suits came in either a splinter pattern or in a neutral grey colour known as mouse grey and so I thought it appropriate to mix this variation up with my Volksgrenadiers. 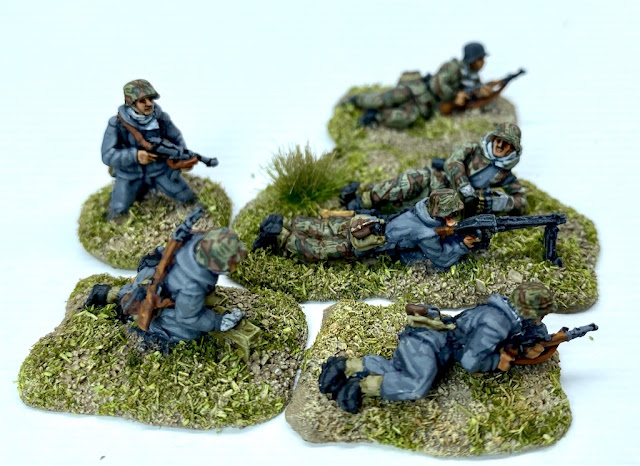 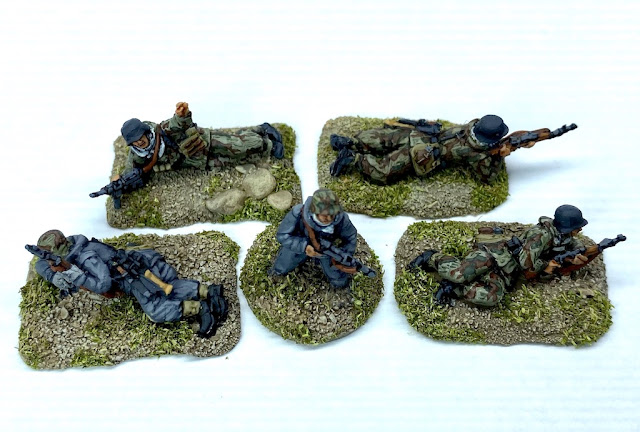 Mixing in a few of my regular German infantry should ensure I have a good variety of uniform types suitably dressed for this time of year. 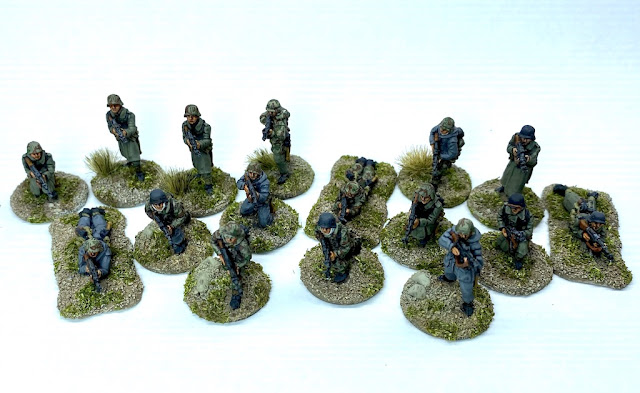 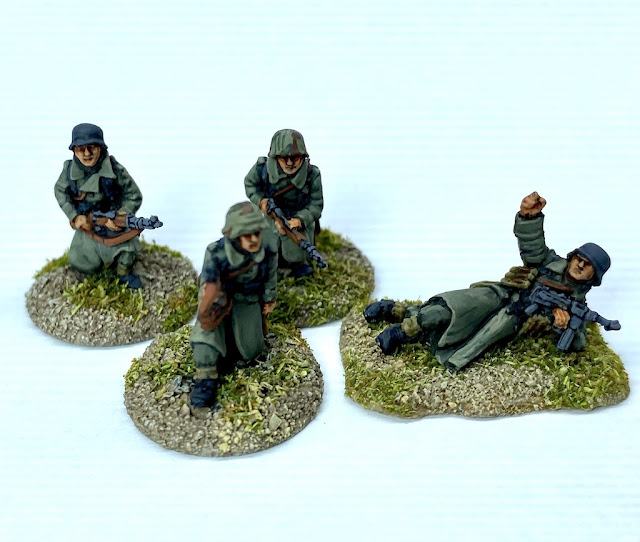 Creating these units has then meant two new platoon boards to array the figures for each unit into their respective teams and squads before they deploy onto the table. One for the Sturm platoon and one for the rifle platoon. 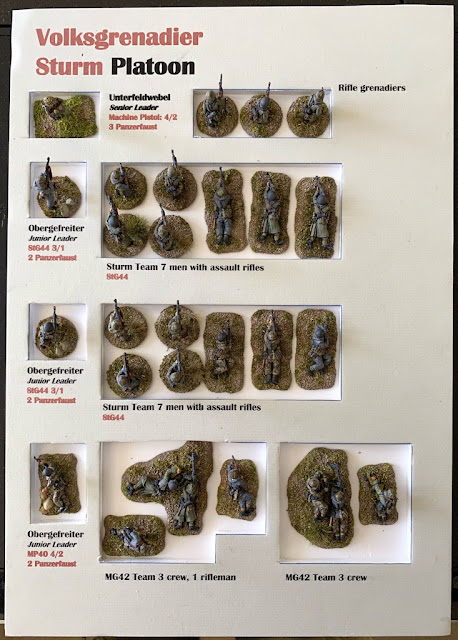 The StG44 assault rifle generates three fire dice at close range (0-18"), so it can be quite fearsome, the problem for the Volksgrenadiers is that their force is rated as Green, which may make getting into close range a tough ask, but if they do they will generate a lot of firepower.

This may well prove an issue, as the Americans are not short of firepower themselves and have the added benefit of defending from the solid houses and farms in the area. Not only that, they have access to a number of high firepower anti-aircraft weapons which they can turn on ground targets. The Volksgrenadiers will want to avoid running into a M16 halftrack with its quadruple 50 cal machine guns. This was one vehicle not in my collection and I made this one by kit-bashing a Plastic Soldier Company half track with the quad 50 cal combo from the old Matchbox M16 half track kit. The crew are from AB Figures. 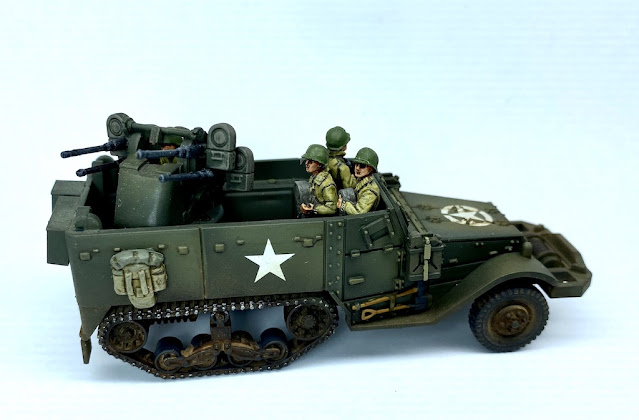 One other item is a Bofors 40mm AA gun. While this seems a slightly odd choice for an American support there have been several times when it has been used to attack ground targets and this was the case with 28th Division in some of the encounters on Skyline Drive. One thing I've found very difficult to track down is an American crew for the Bofors. I've seen British crews for both early and late war, although they are all invariably posed look skywards as you might expect for an anti-aircraft gun crew. In the absence of a dedicated crew I have raided the spares box to see what I could find and have adapted a few spare AB drivers and gun crews to fill the role. The gun model comes from Zvezda. This is one of several of the very reasonably priced Zvezda 1/72 gun kits that I have in my collection and once again I'm very impressed with the quality. 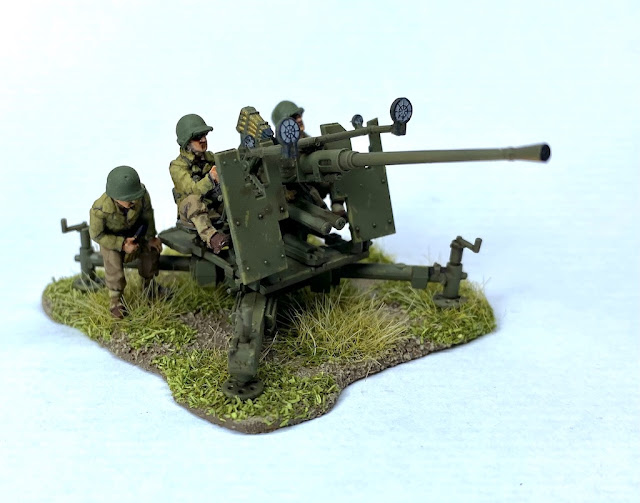 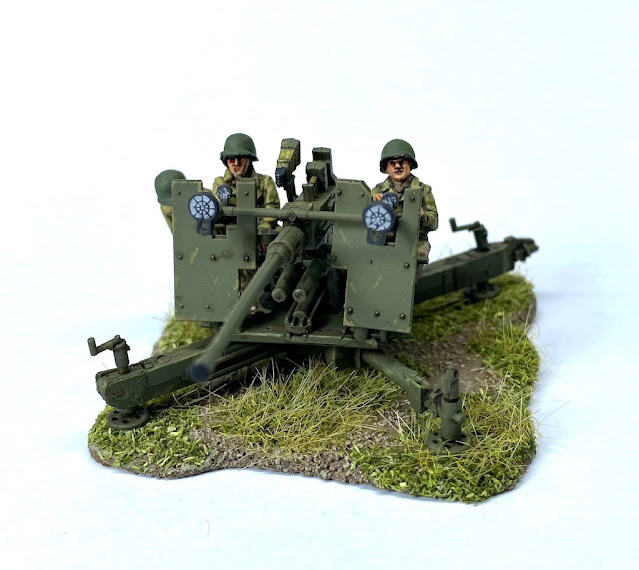 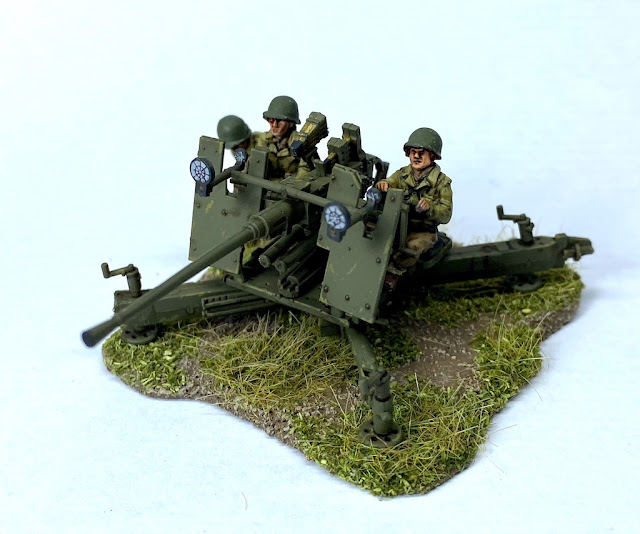 The Germans have additional firepower in the form of armour. This can arrive at any time from campaign turn four, depending on how quickly the River Our is bridged. The options are either a PzIVG/H or a Panther. I have models for both of these from the Plastic Soldier Company and while they are good for gaming I have long wanted to 'upgrade' my PzIVs with a nicer kit. This campaign was the perfect incentive and so I picked up the excellent Revell kit of the PzIVH. Lovely to build and I'm very happy with the end result. The crew figure is from AB. 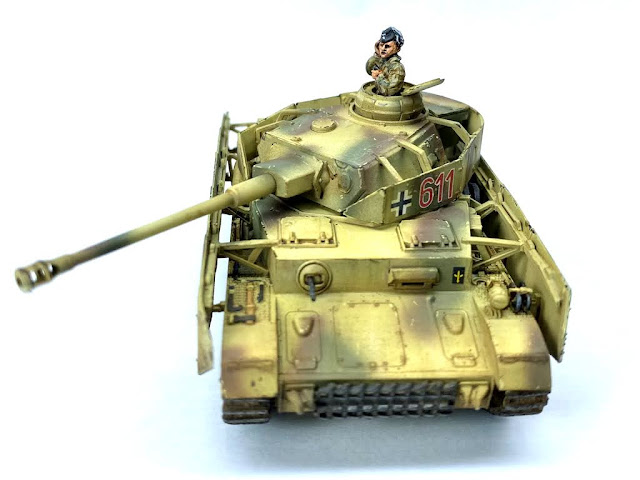 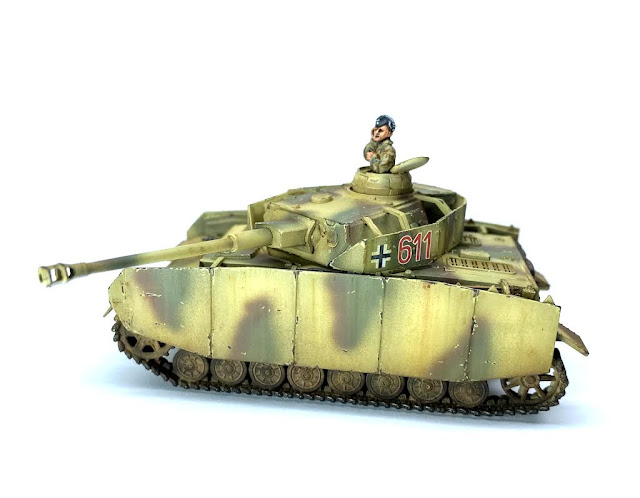 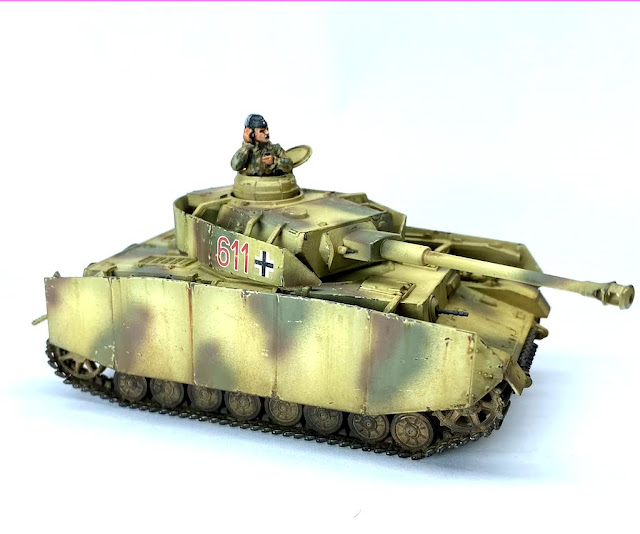 The campaign doesn't require a great deal of terrain that I don't already have. While the popular images of the fighting in the Ardennes features a lot of snow, during the two day period covered by this campaign there was no snow in the area. This suits me fine as I don't have any winter terrain that would be suitable, however I have wanted to make terrain that would work for Europe from the late autumn to early spring. With that in mind I have created bare hedges and trees to give a suitably wintery look to the table. 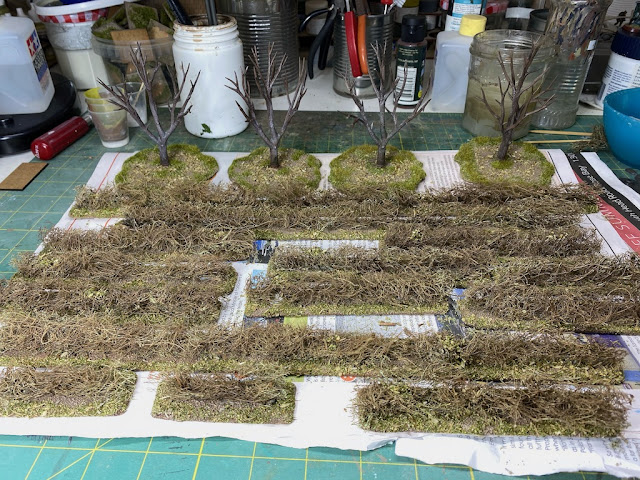 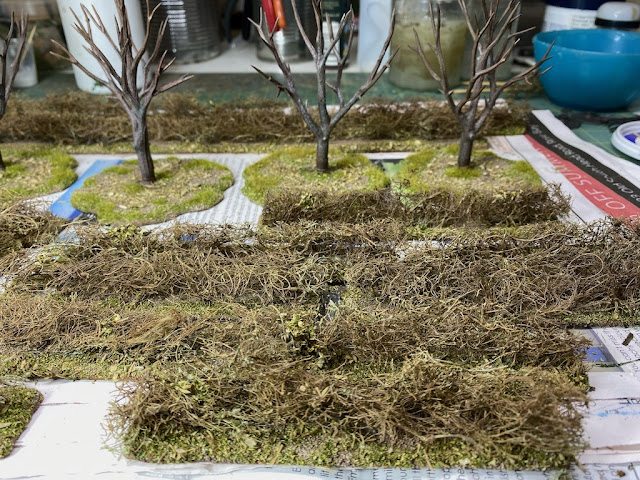 The hedges are made using rubberised horse hair, which these days is actually rubberised coconut fibre. The material is used in furniture making, particularly in Britain, where it is easiest to find. The problem is that furniture makers purchase this stuff in large quantities, far more than a wargamer will ever need, so you need to search around for a supplier who sells it in smaller sizes. I bought several A4 size pieces several years ago (I can't recall where from but I found them on eBay, I think).

The fibres come in sheets about 25mm thick. 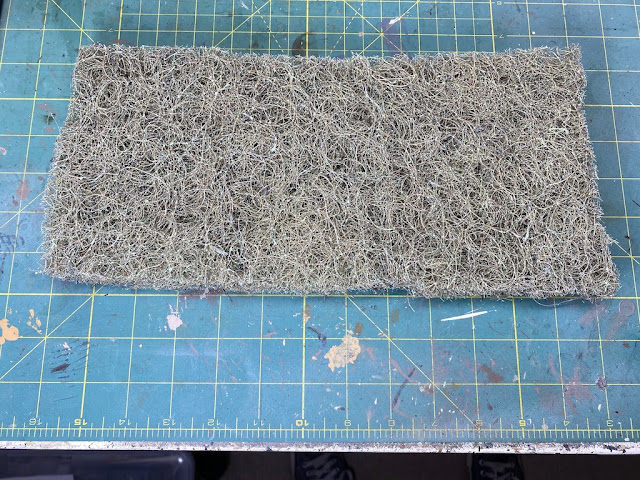 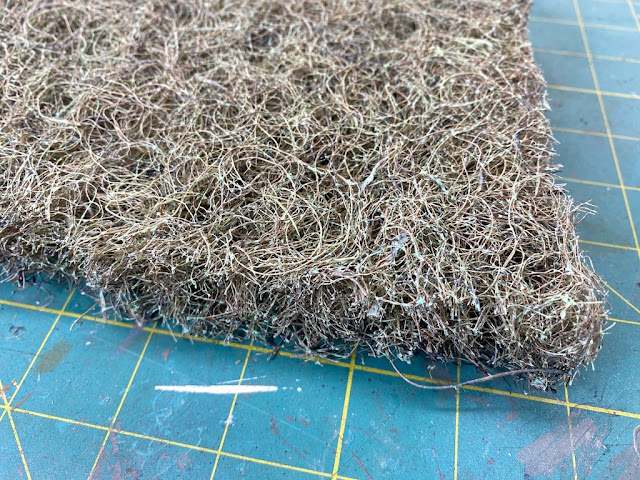 It cuts easily with a pair of scissors and so it's simple enough to cut lengths for things like hedgerows. 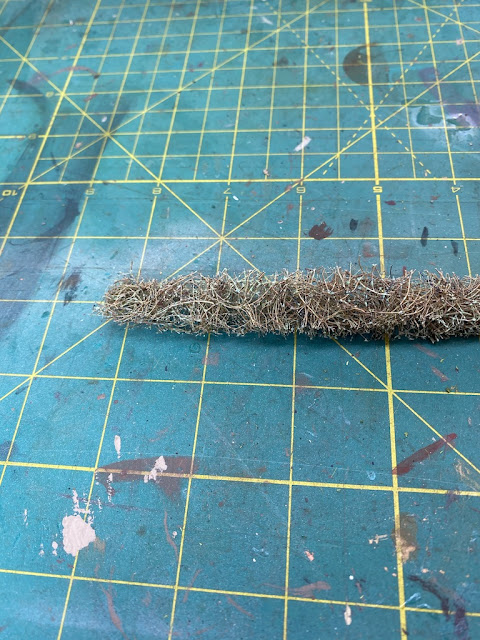 I've found that the shape is a little regular and it's best to tease the fibres apart to make for a more natural appearance. 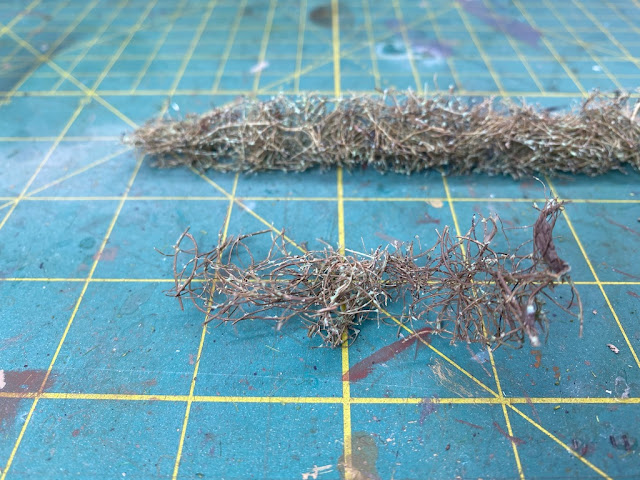 I've used it extensively for making trees and hedges. In the case of the winter hedges all I have done is given them a light airbrush with a Dark Earth acrylic paint. For hedges and trees with foliage I've kept the natural colour (which is mainly obscured anyway) and applied various mixtures of flock and foliage. 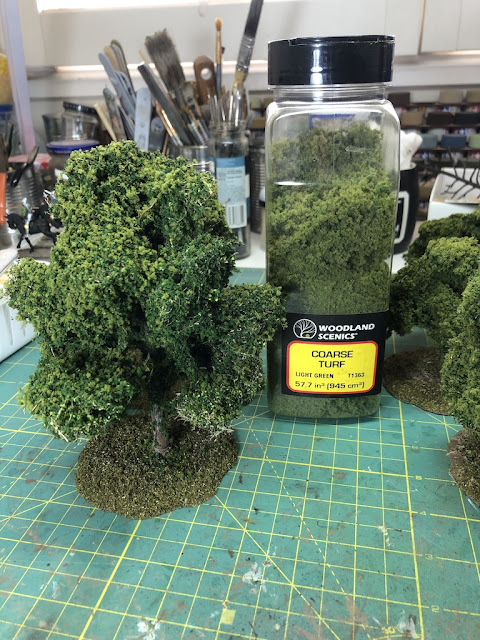 The Ardennes are also noted for their extensive pine forests and while the fighting for this campaign takes place amongst the villages and farms that run along the level ground of the ridges, the valleys are densely wooded. As a result a few of the tables for this campaign have pine forest skirting the edges. I picked up a cheap box of fir trees from eBay and made up enough bases of trees to represent these areas of woodland that feature in several of the scenarios. The bases were cut from MDF using a jigsaw and then bevelled with my Dremel. 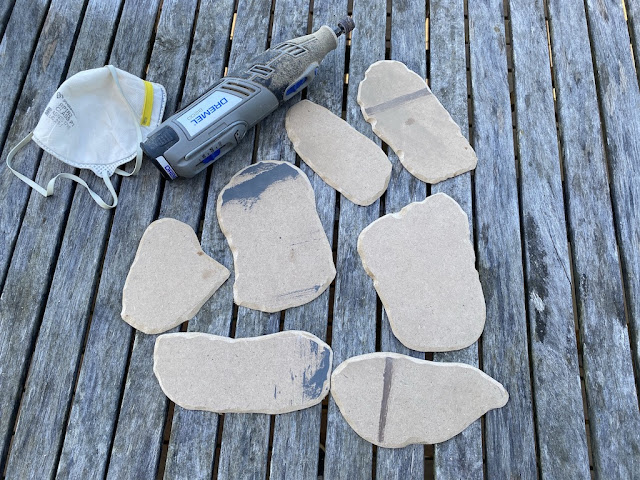 The cheap trees were usable straight from the box but I thought their colour was a bit too dark green. 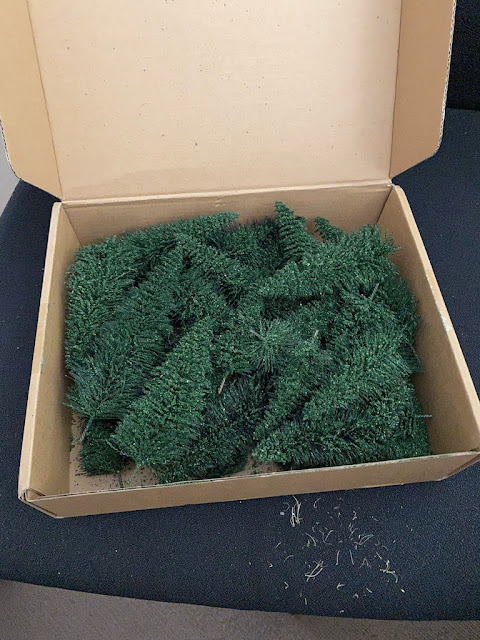 I used my airbrush to give them a light spray of Yellow Green to add highlight and contrast. 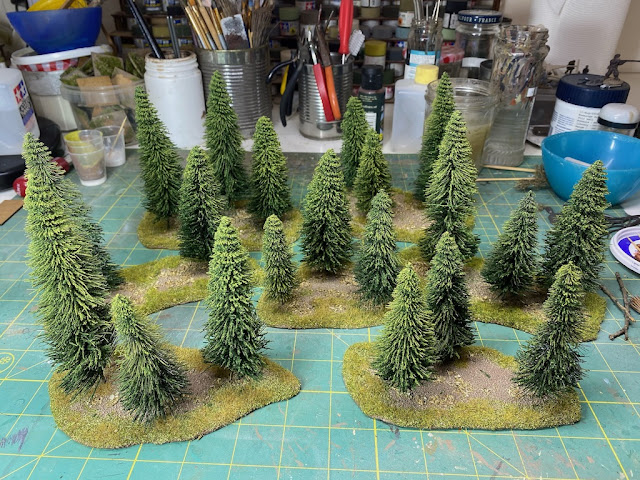 There is one area where things won't look quite right and that will be with the uniforms worn by the Americans. I have them only in their uniforms for Normandy and so they won't be dressed for the colder weather like their German opponents, nor will they be wearing the later period uniforms. As I write AB Figures have announced a range of Americans in greatcoats, but they won't be available in time for the campaign (nor do I have the inclination to paint up an entirely new platoon!). 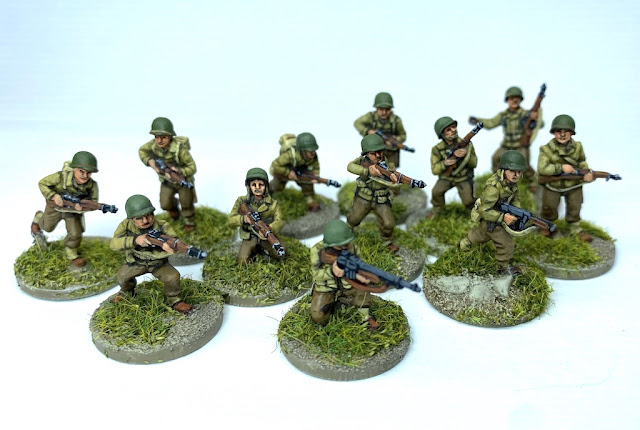 As always I will write up the reports for each game as we play them and post them on the Chain of Command campaign AARs page here on the blog.

The pdf version of the Bloody Bucket campaign for Chain of Command is available at a very reasonable price from the Too Fat Lardies website, available here.

Posted by The Tactical Painter at 16:23