While 2020 was in many ways one of the worst of years ironically it has proven to be a great year from a gaming point of view. Despite a lengthy lockdown in March and April the latter half of the year saw a return to face to face gaming. Aside from my usual opponent Dave I managed to play games at two different clubs, one of which has now become a regular fixture.

That led to my first ever game using the TooFatLardies First World War rules Through the Mud and Blood. As it happens, not a game set amidst the trenches of the Western Front, but a more exotic game set in East Africa that provided a very good introduction to the rules. 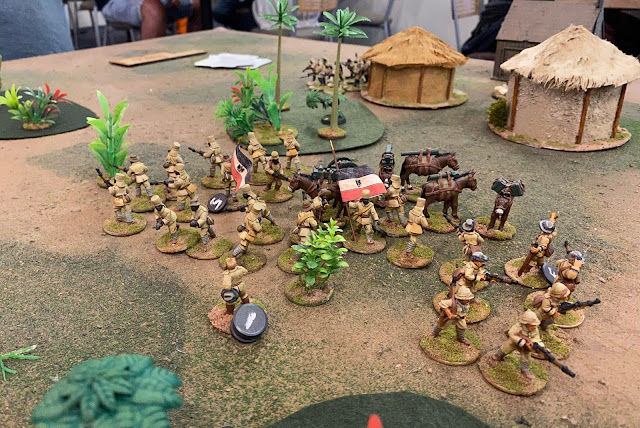 I bought Through the Mud and Blood about five years ago, at the same time I invested in enough 28mm figures from Great War Miniatures to make up platoons for British and Germans for the latter part of the war. My intention was to try to convince an old board gaming opponent of mine to try miniatures (another Dave as it happens and a mutual board gaming friend of both of us from ours days playing Advanced Squad Leader). Sadly, despite a big interest in the First World War, he didn’t take to miniatures and so the project became dormant. So on the bright side, the combination of  joining a new club, finding a ready opponent and generating some interest with my regular miniatures opponent Dave, was more than sufficient to give me the impetus to bring the project back to life.

I had started painting the British and so it made sense that these would be the first to be completed. All the figures are from GWM and they are a splendid bunch of sculpts. Fired with renewed enthusiasm I picked up the Lardy published supplement Stout Hearts and Iron Troopers, which is an excellent introduction to the rules. I’m using the platoon lists provided there for the introductory scenarios as the basis on which I’ll build the core platoons. 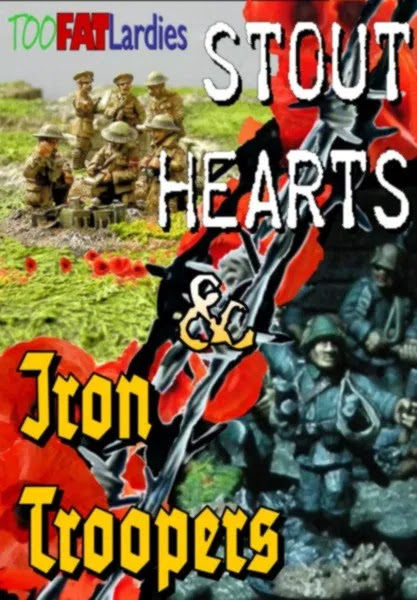 For the British that means a platoon lieutenant and a sergeant as the two men to command the platoon. The platoon itself is made up of four sections - riflemen, rifle grenadiers, bombers and Lewis gun, each of which is commanded by a corporal.

The individual soldiers are based on 25mm rounds and the officers and NCOs are on 30mm rounds. The platoon lieutenants tend to be either a Status III or IV Big Man and so I decided it might be useful to mark the bases in some way. Rather than opt for using sabot bases as I have for my leaders in Sharp Practice, I’ve decided to theme the bases. In the case the of the lieutenants that’s been done using a number of sandbags to signify their status. 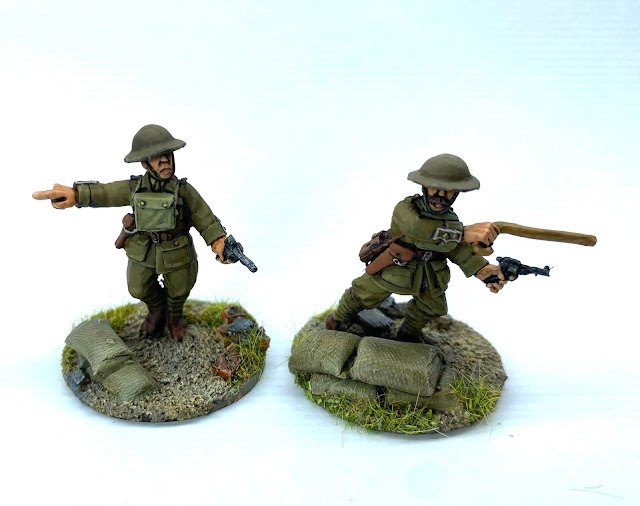 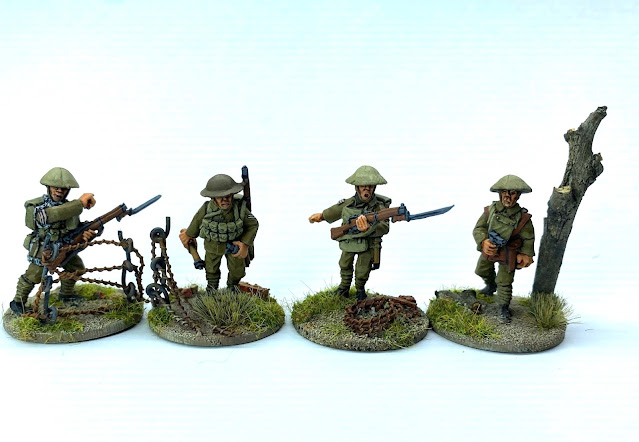 The other ranks in the various sections of the platoon have nothing specific on their bases and so it should make it easier to identify the Big Men. Here are some of the rifle grenadiers. 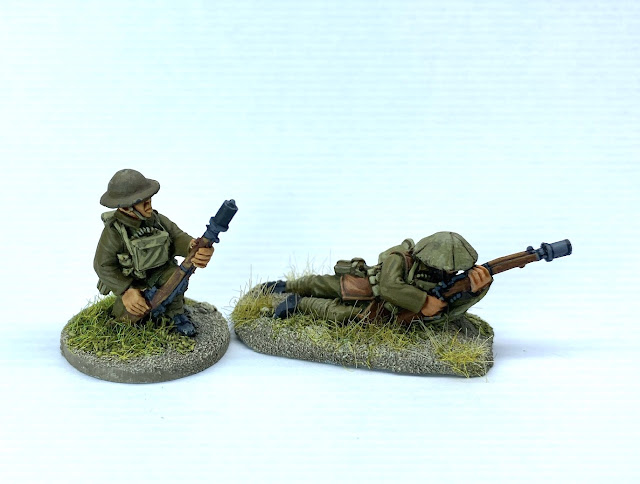 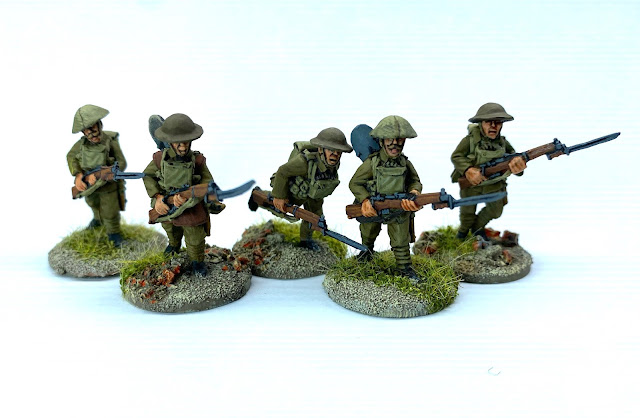 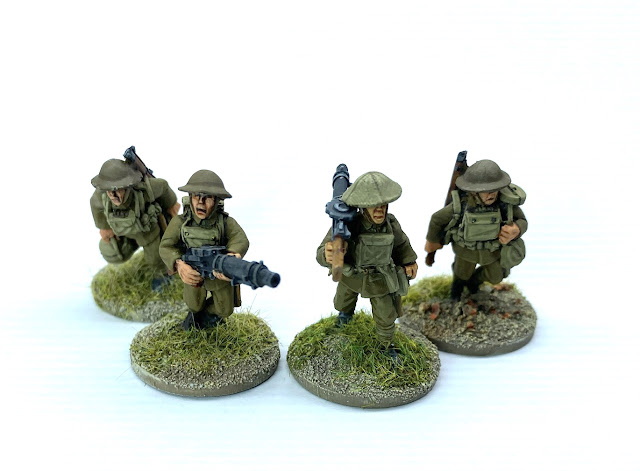 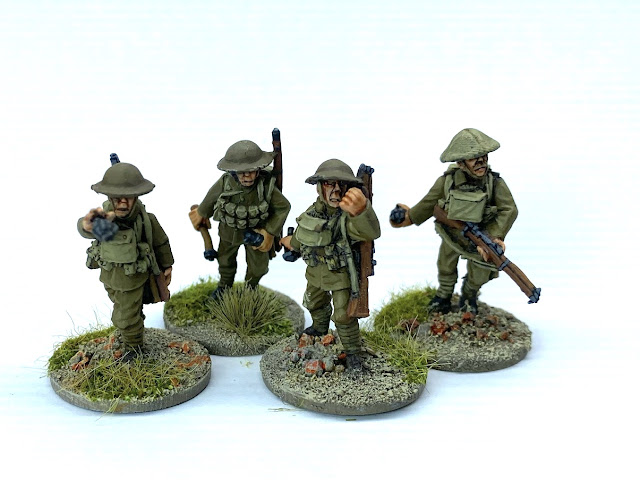 For the first time I have magnetised the bases of my figures and tried a different storage method. These are metal letter trays that I bought from IKEA from their Kvissle range of office furniture. The trays are covered in a thin layer of cork which prevent the magnets working effectively but this can be peeled off. 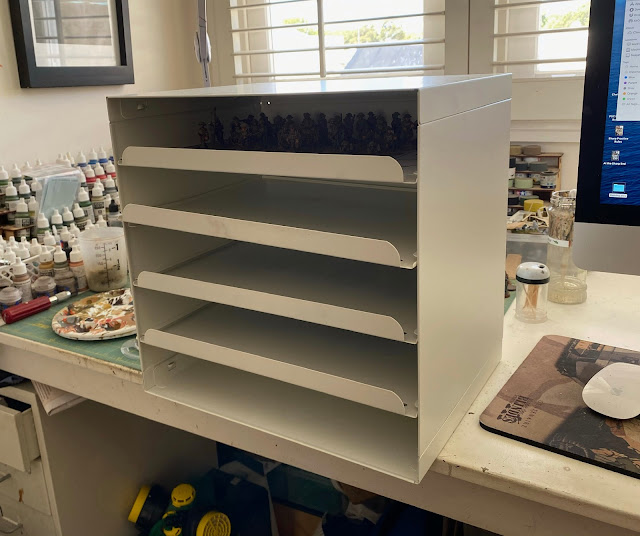 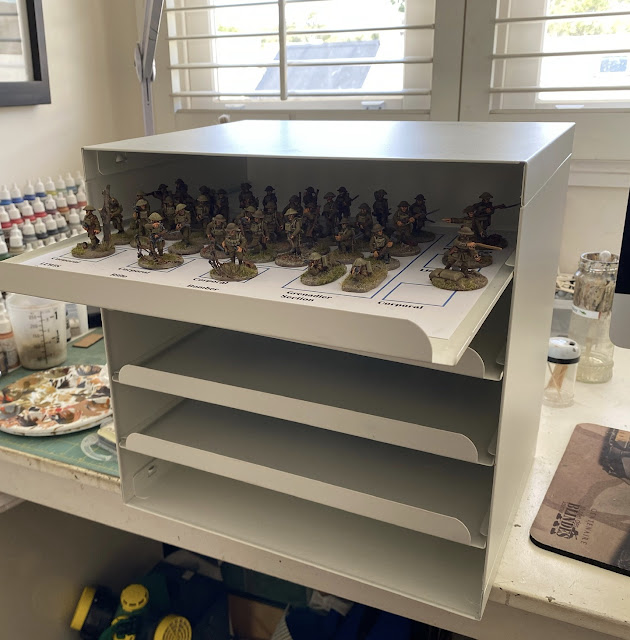 What I like in particular is that the trays can be removed, which means they can be taken straight to the gaming table ready for deployment. 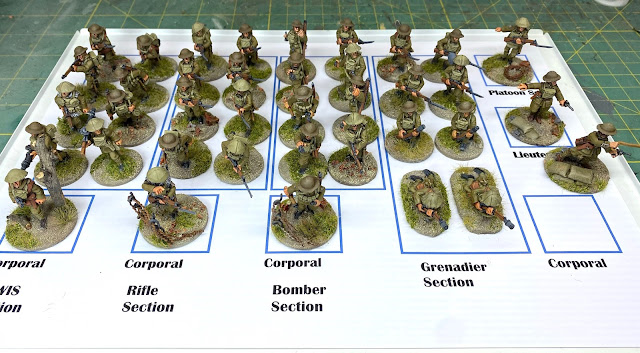 I have a Vickers machine gun team to paint, as well as a few additional leaders and some men to act as scouts or runners with the platoon HQ. Behind them in the paint queue are their opponents, the Germans. Lots of those to paint as I have enough for a platoon of regular infantry and one of stormtroopers.

Posted by The Tactical Painter at 12:58