A simple set of railway signals

With a forthcoming game in the Westwind Konigsberg campaign Scenario 4 The Signal Box at Seerappen featuring a Railway signal box that I had made earlier, I thought it would be great to add a set of signals to bring an extra touch of detail to the table. 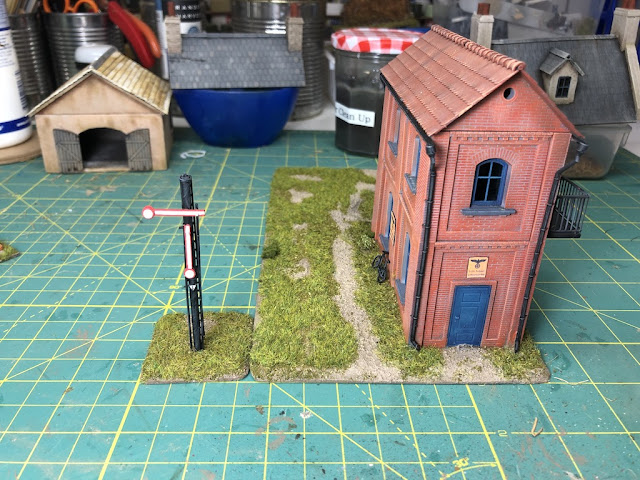 Playing in 20mm means the model rail 00 scale is ideal for finding terrain. No surprise there are plenty of options for signals, but the only ones I could find were all detailed, working models that were expensive and far more intricate than I needed. So I thought it would be simple enough to scratch build a set.

I had recently bought a set of industrial lights from Model Scene, a model railway supplier. These were described as 'yard lamps' and my initial thoughts had been that these would work well for railway and other industrial settings like factories. It gave me an idea for the railway signals. 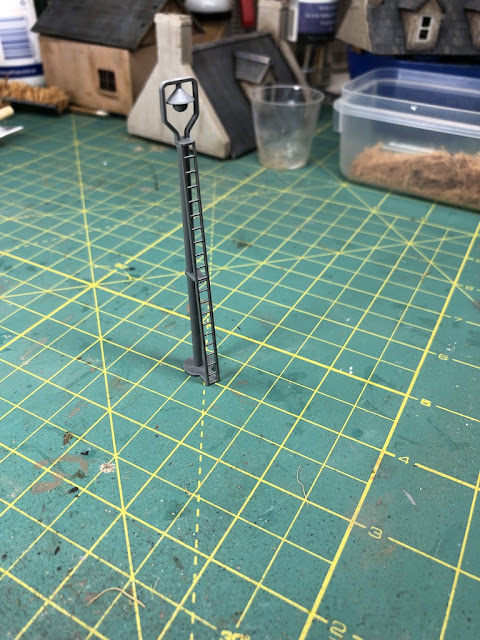 The first thing was to remove the lamp from the top of the pole. 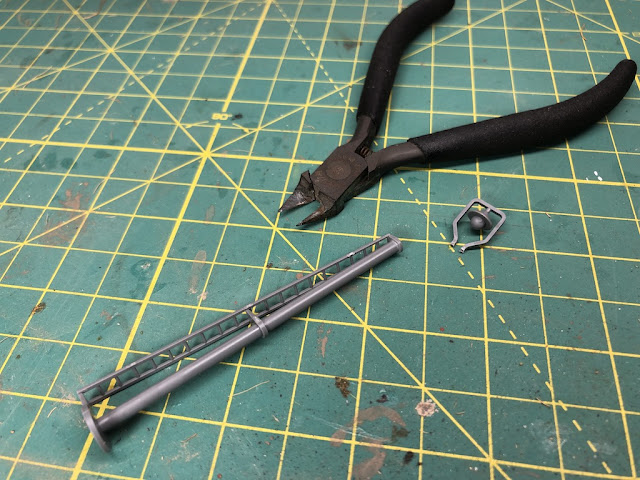 I already have a use for that light fitting and it will appear in a different terrain project that is currently on the workbench, so nothing going to waste here. The next thing was to mount the pole on a stable base made from a piece of MDF. 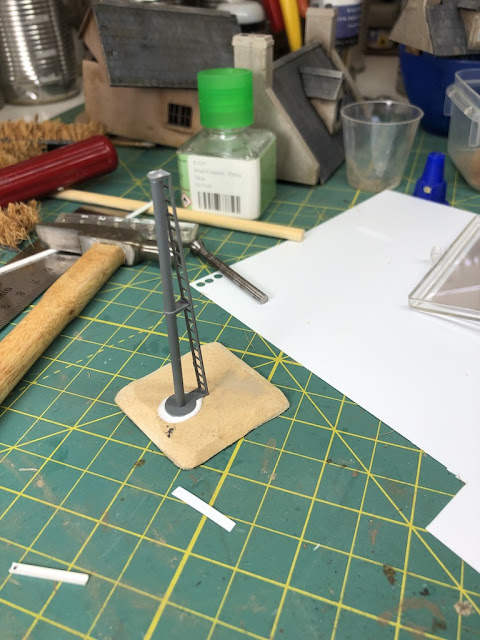 The arms of the semaphore signals themselves I would scratch build from plastic card. It gave me a chance to utilise a punch & die set I bought some time ago for just this sort of scratch building purpose. 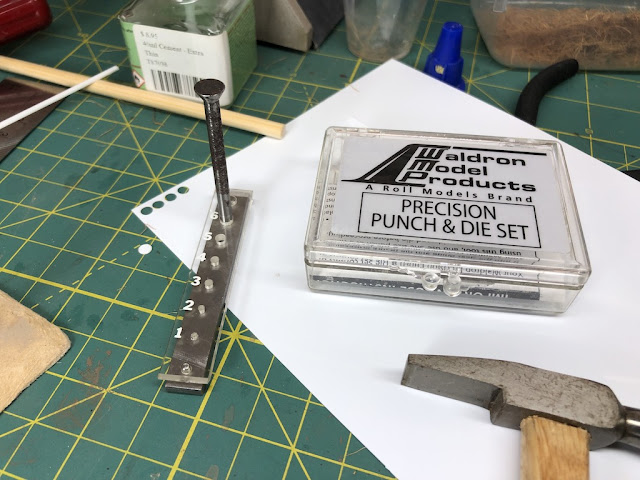 Having punched out suitable size discs I then glued them to strips of thicker plastic card that come ready made in a channel shape. 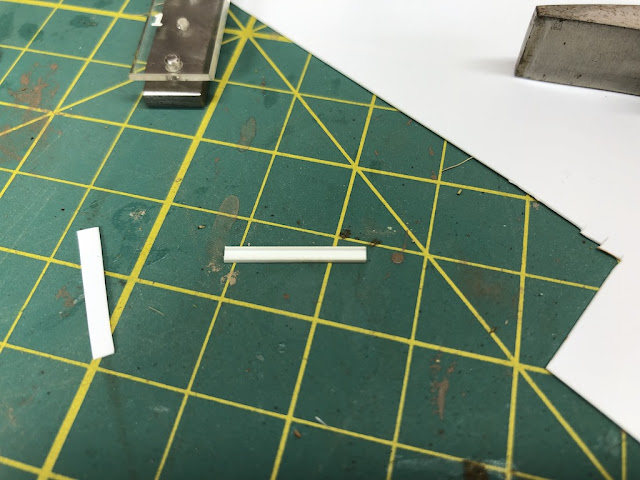 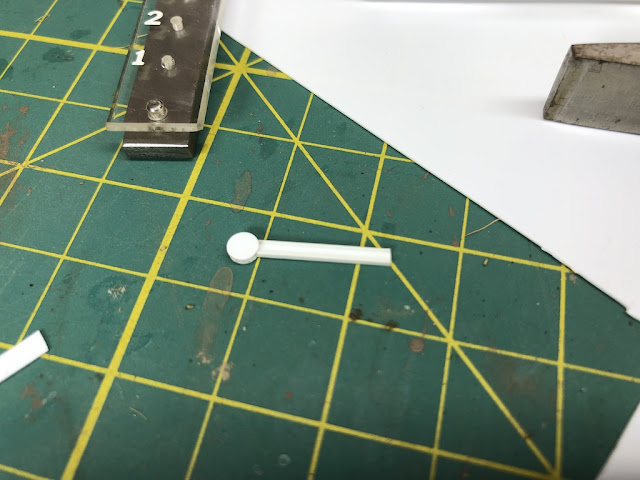 I made up two sets and these were attached to the pole to form the arms of the semaphore signals. 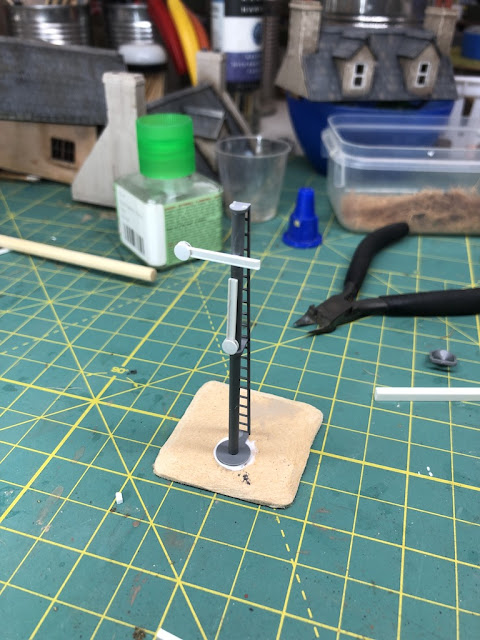 I then added other detail like the mechanical lever arms, this time using strips of plastic rod. 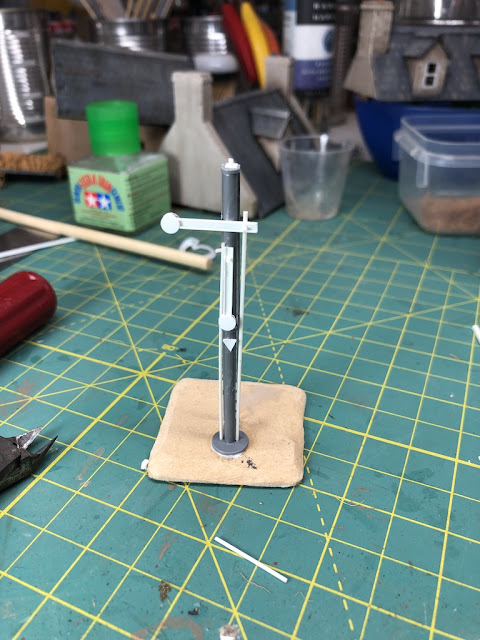 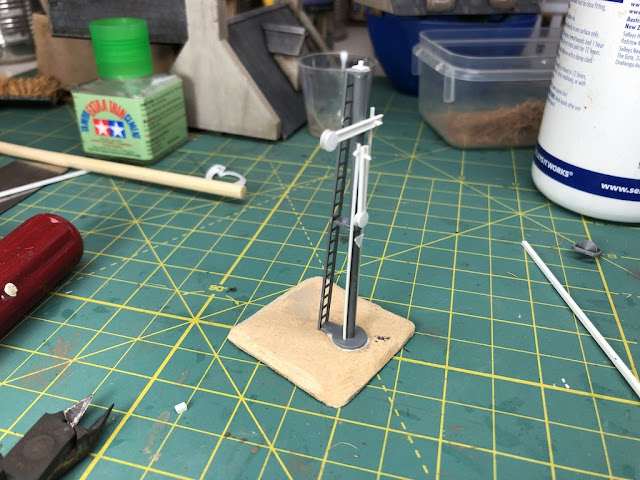 The base was textured with a layer of PVA glue and coarse sand before being primed ready for painting. 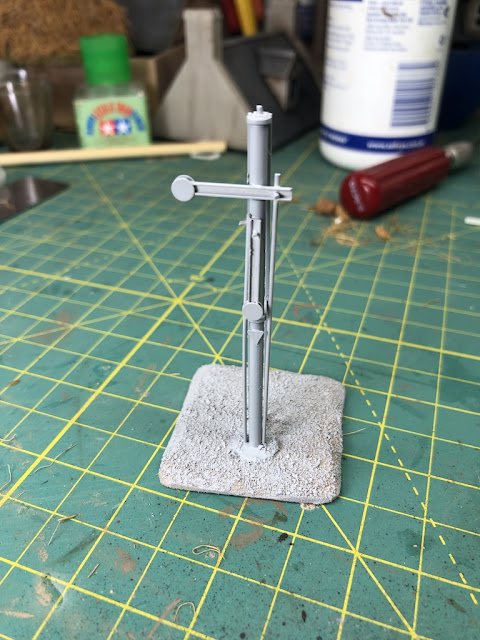 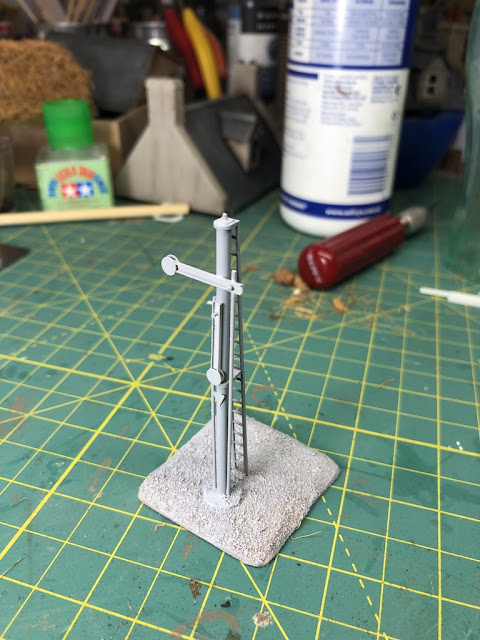 A simple paint job followed and the final touch was to flock the base. Quick and straightforward, it gave a nice addition to any setting that will feature a railway line. 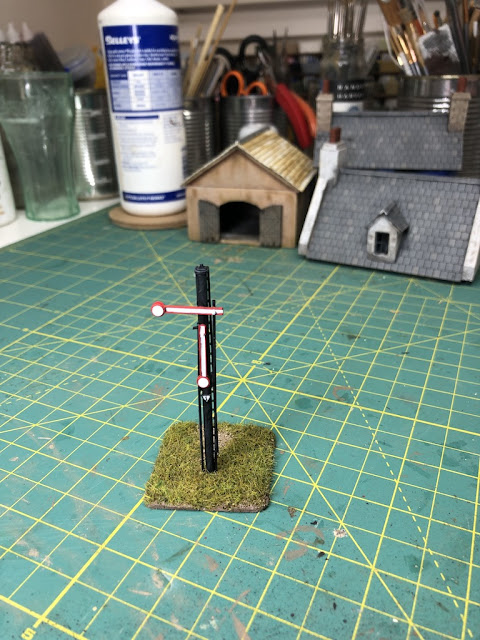 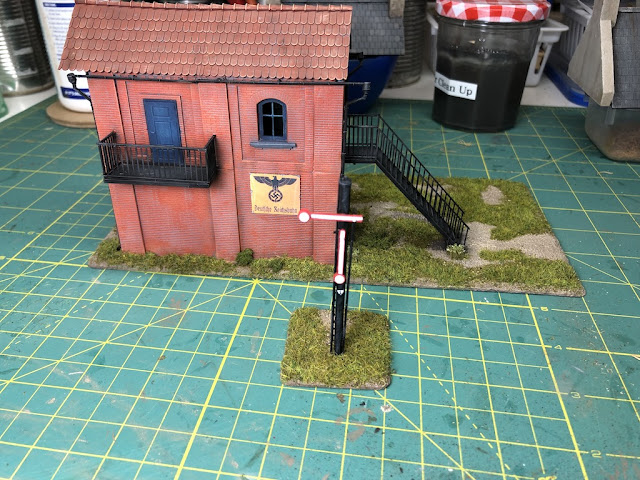 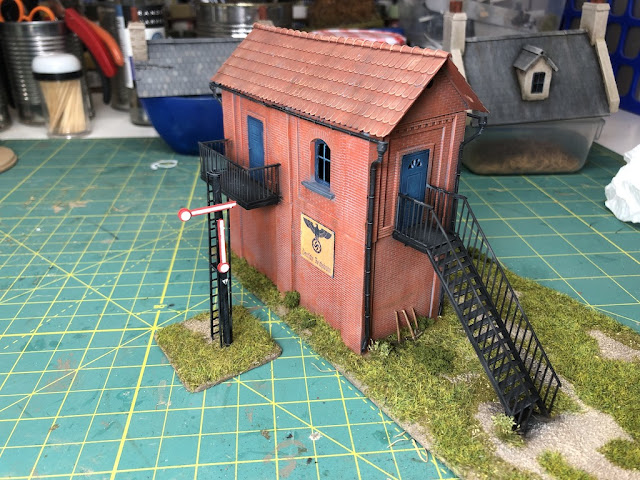 While I was in a terrain building mood I also made some long overdue haystacks for those rural settings. I can take no credit for the creative thinking behind these, as they are inspired by one of the many great ideas on the Silver Whistle blog and you can see how to make them here. 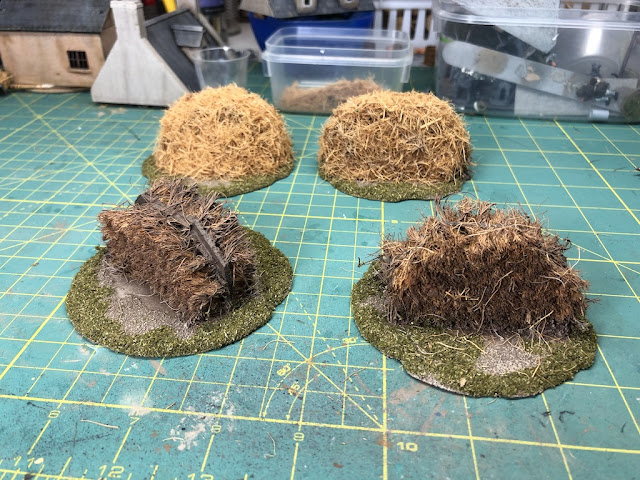 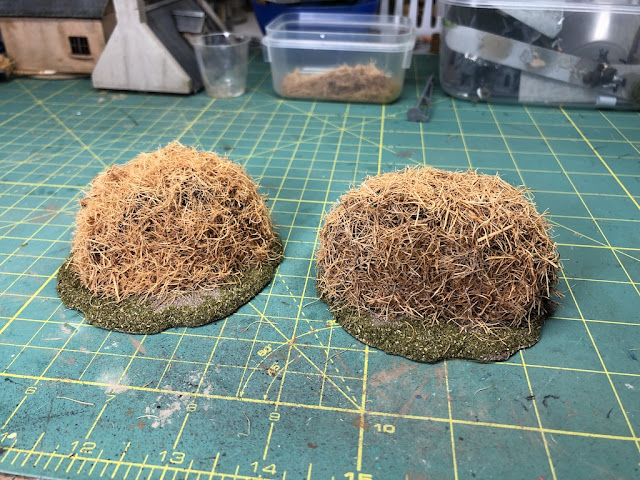 A larger MDF base and a couple of pigs were added to this simple pig sty from Blotz that I made and painted some time ago. It is amazing how something as simple as a slightly larger base and two pigs have really lifted it and brought it to life. 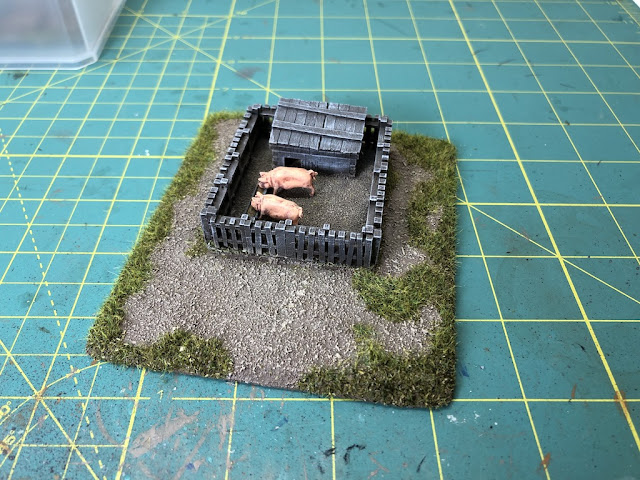 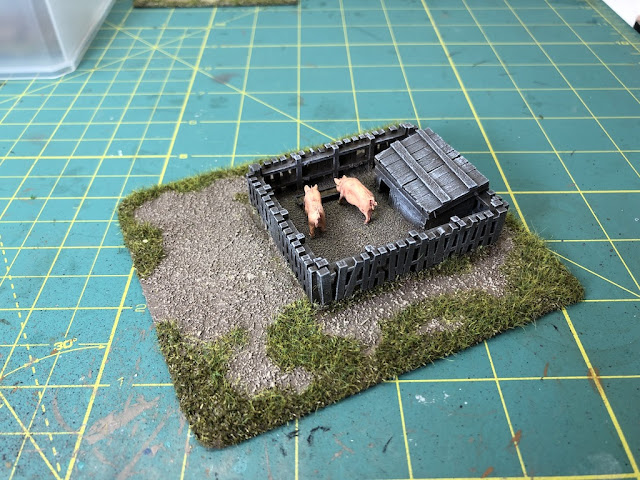 The haystacks and the signals had their first outing in the recent Westwind campaign game and hopefully they will see much more use in future games. 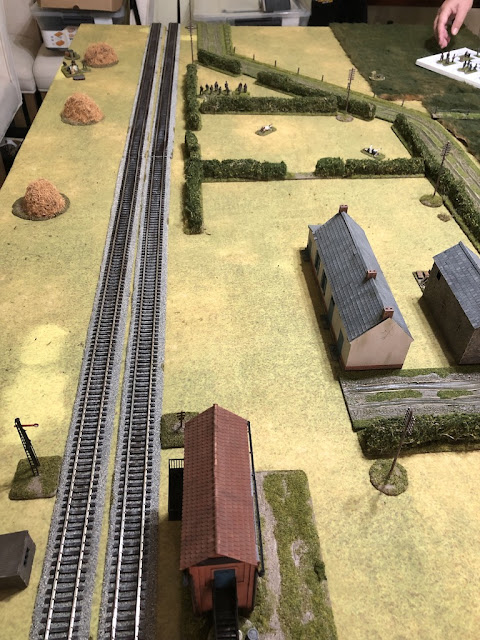 Posted by The Tactical Painter at 12:50

Email ThisBlogThis!Share to TwitterShare to FacebookShare to Pinterest
Labels: Terrain