Things have slowed down a bit for the Christmas and summer holidays, but I've managed to keep the US infantry platoon project for Chain of Command slowly moving along.  Another twelve figures painted and all the figures painted so far are now varnished and bases flocked.  I'm close to the halfway mark with the figures, but that's not counting the vehicles and guns.  It never ends....

There are thirteen riflemen finished, so another 17 to go for a core platoon, plus another ten if I want an additional squad for support.


I have painted six BAR men, partly in anticipation of playing the '29, Let's Go!' pint sized campaign, where all squads can have two BARs.  Looks like you can never have enough of those.

I've made more than enough Lieutenants, Sergeants and Corporals for a core platoon, but in anticipation of needing a Corporal for a support squad and additional junior leaders for support weapons I've added a few more.

And to keep some variety to the paint job, I've made up a bazooka team for the platoon HQ and a 30 cal team as a support option. 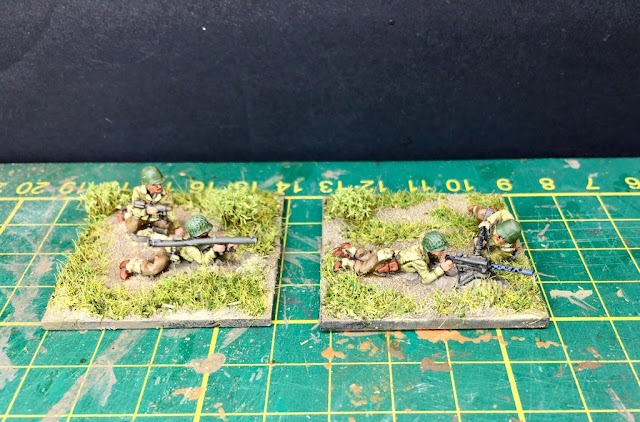 Next in the paint queue are more riflemen, another bazooka team and the FOO team.  Onwards!
Posted by The Tactical Painter at 17:39