Having worked in museums I'm extremely familiar with the protocols for handling exhibits.  You don't.  So a visit to the Cambodian War Museum in Siem Reap was a pleasant surprise, because it offered unfettered, unsupervised and unlimited handling of a host of small arms.  All are left over from the conflicts that blighted that unfortunate country between 1965 and 1991 and the vast majority were of Soviet origin, including many of WWII era design (if not manufacture). 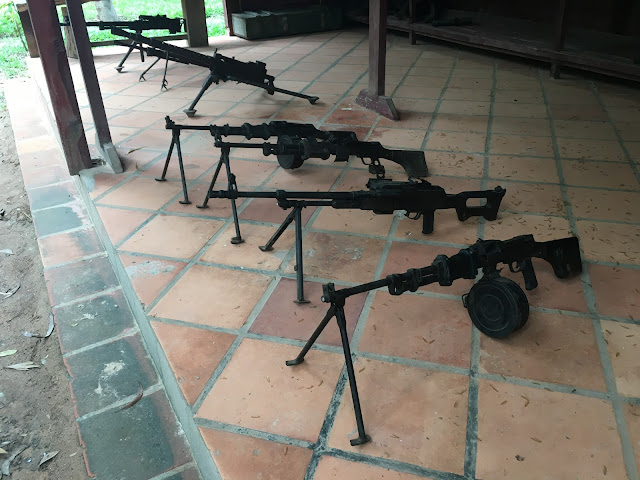 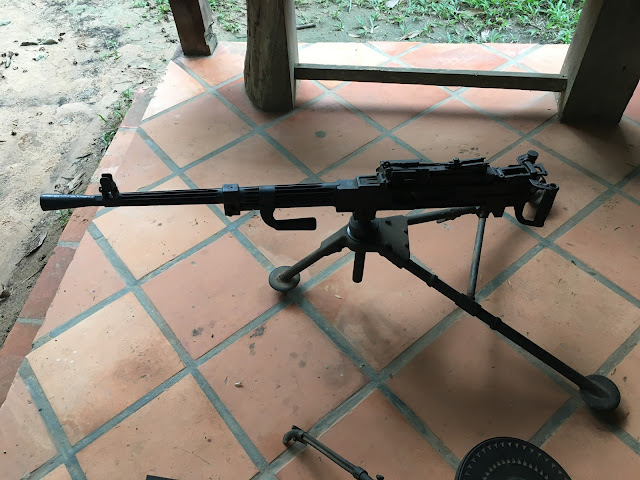 I was immediately drawn to the three above because of their WWII vintage.  I was really surprised at the weight of the BAR, it was much heavier than I expected and felt like quite a cumbersome weapon to carry.

Most of the war museums I've visited have been well represented with weapons from the Western allies and the Germans, but much less so with Soviet equipment (or Japanese for that matter).  One reason the PPSh caught my eye was because of a discussion on The Guild forum a few months back regarding sculpts of 20mm figures using the weapon.  The question being, what is the correct way to hold one?  I have no idea what it says in the training manual, but picking one up gave some good indication of what might work. 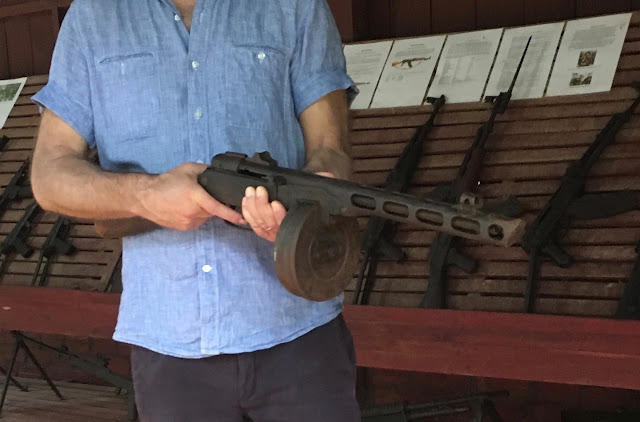 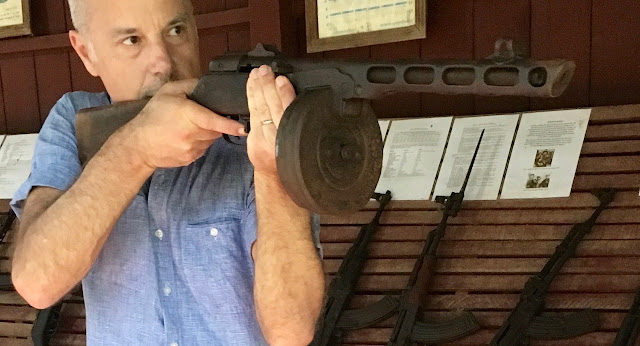 Keeping in mind the drum magazine is empty, the hold I'm using above seemed the most comfortable, but I suspect with a full drum the balance would shift a bit. However, more significant, is the position of the firer's left hand fingers and their proximity to the cocking handle.  I cocked it manually and pulled the trigger and that is not a piece of metal you want your fingers close to if it's moving backwards and forwards repeatedly. 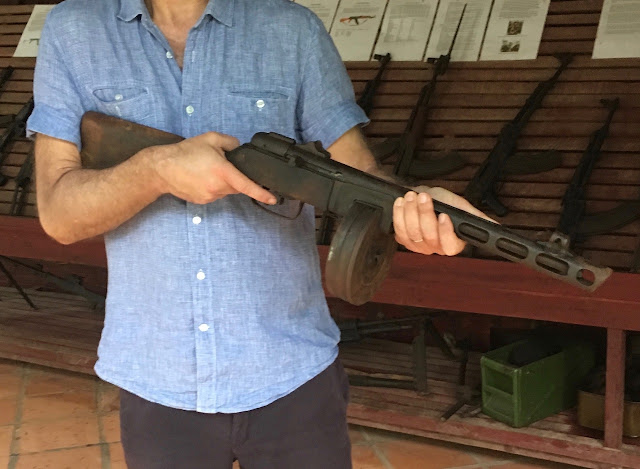 This grip seemed more comfortable and balanced and appeared to offer better control of the direction of fire, but I have no idea how hot the barrel can become, so not sure if this is an option. 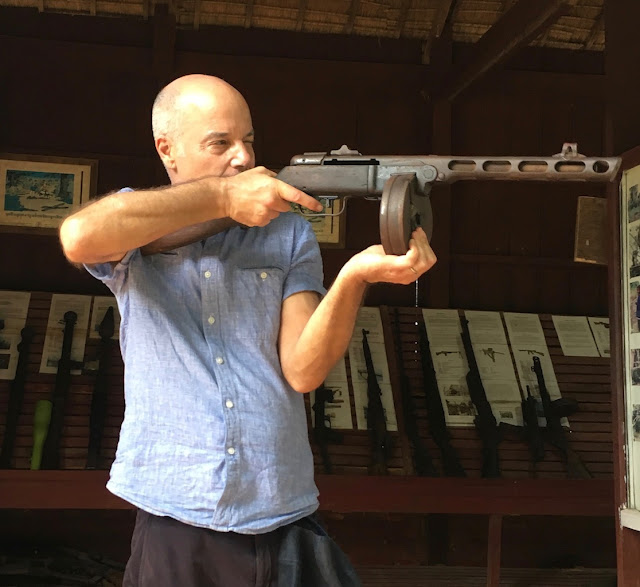 I've heard it said that this is the correct method, but to be honest it feels awkward.  This was exactly what my wife said before she took the pictures.  Again, there is no ammunition in the drum magazine, so this may make a difference.  Anyhow, I'm no small arms expert, but it was interesting to pick the gun up and try the different options.

There were other bits and pieces that I couldn't resist picking up: 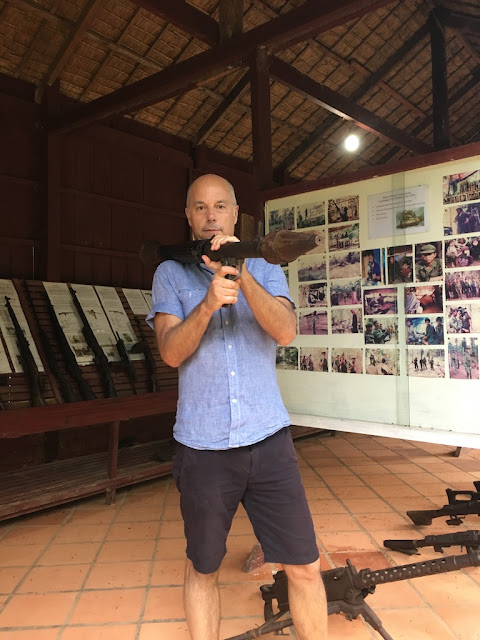 The Museum also features some vehicles and guns, all exhibited outside and subject to the elements, so certainly not museum best-practice.  All of the tanks were wrecks, although in a few cases, despite having a good look I couldn't work out what the cause of damage had been.  Most had been burning at some stage, but I could find little evidence of armour penetration.  Mines? Air or artillery strikes perhaps?


All very interesting.  We followed this with an unplanned side trip to one of the sites of the killing fields.  That was a sobering reminder of the consequences of these wars and put things in a bit of perspective.  And, just in case you think I spend all my free time visiting war museums, here's a few holiday snaps from Ankgor.


The temples and the city walls of the ancient capital Angkor Tom have a number of extensive wall reliefs depicting warfare of the period.  They remain the most extensive documentation of the military history of the Angkor kingdom (circa 1100AD).  The kingdom seemed to have two main enemies - the Cham Kingdom, out of what is today central Vietnam and the Siam Kingdom.  Siem Reap the town closest to the site of Angkor actually means 'Siam Defeated' in the Khmer language. 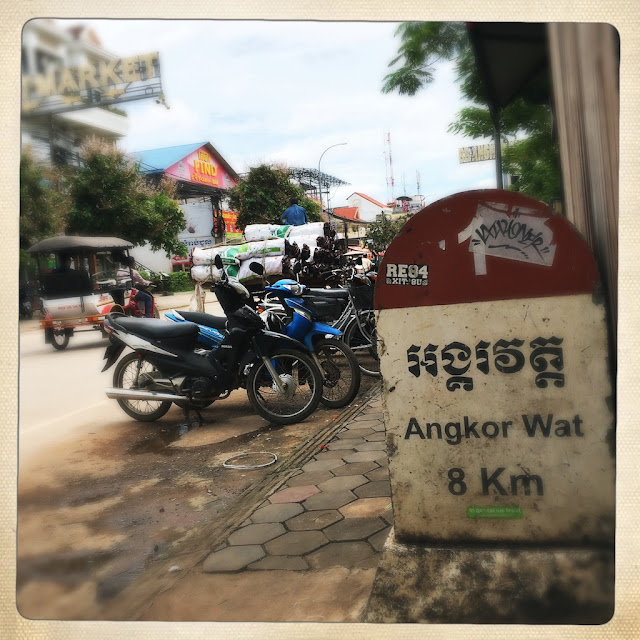 Posted by The Tactical Painter at 12:52