Von Luck campaign Scenario One: 'Patrol on the Ring Contour'

The campaign starts off with a Patrol scenario where a screen of Paras meet forward elements of Kampfgruppe Von Luck as each try to determine who or what they are up against. 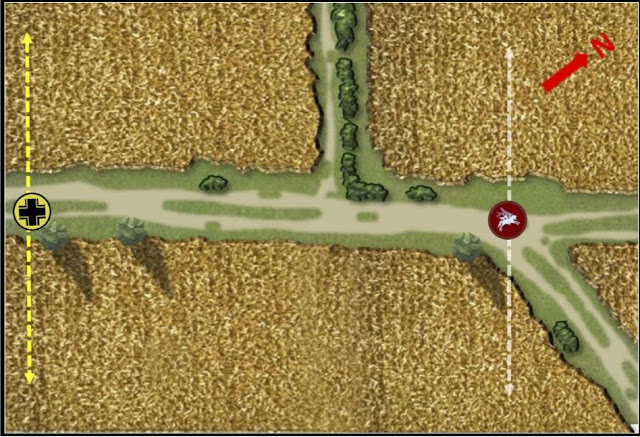 The Paras have to roll to see who from the platoon has landed close to the drop zone and made it to the battlefield. All up it wasn't too bad. From the platoon HQ we had a the Lieutenant, the 2" mortar team and a sniper. I wasn't expecting the Germans to have any armour support, so I wasn't unduly worried that the PIAT team had failed to show up. #1 Section arrives automatically; #2 Section arrived in full strength, but the entire #3 Section were missing. I sensed I would miss the fire support their two Brens were likely to bring. No support points for the Paras in this scenario, so that was my lot.

The Germans have a full panzer grenadier platoon and spent their 4 support points on an 80mm mortar barrage, so my hunch that I wouldn't need the PIAT turned out to be correct.


I opted for three patrol markers with the intention of moving forward quickly to control the hedge line. With the platoon understrength this would most likely be a brief encounter where the Paras could aim to inflict some casualties on the advancing Germans before falling back.

The Paras are elite and at effective range the Germans would need to roll six to hit, while I only needed a five or six. Against their firepower I felt the best bet was for some long range shooting and then to fall back. My plan was to deploy quickly and use one section to lay down suppressive covering fire (meaning at effective range the Germans couldn't even get a hit) and then sniping with the other section's Bren (using Concentrated Fire, one of the British national characteristics) to try and take out individual teams. It seemed a sound enough plan. 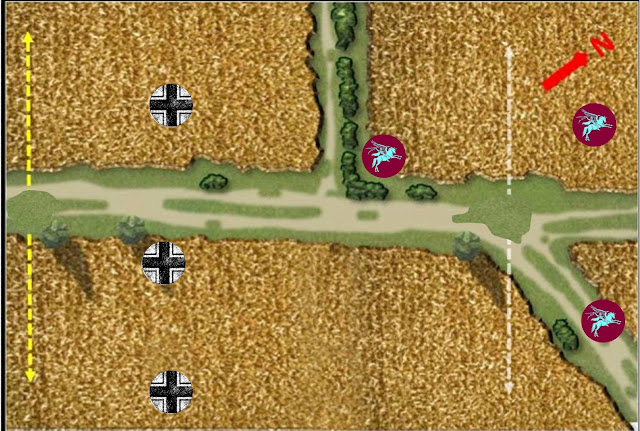 With the higher force morale the Paras started with the initiative and so deployed one section early to the hedge line on Overwatch. However, with one German JoP set up only 6" back from their initial patrol marker placement, they could deploy in close range and I had a sinking feeling my plan was starting to unravel. With three 3s in the German command roll my heart sank when Dave, my opponent, deployed all three squads from his platoon and took advantage of the open fields of fire to target my single section.

It could have been worse, but we took two casualties and two points of shock. The Para section were on Overwatch so immediately returned the fire, but only managed to put a measly two shock on one of the squads. These were only the opening phases and things didn't look good. There were three panzer grenadier squads all ready to pour out fire and one of my two sections had already lost two men. Things could turn even uglier if they hang around for another German phase. It was clear my initial plan wasn't viable.

Things then took a turn for the worse. I rolled my command dice and looked aghast as five 4s stared back at me. I needed to move the section back from the hedge before the next phase, but with the platoon sergeant missing from the drop, my only senior leader was the lieutentant. If I brought him on I'd possibly have trouble deploying other units. I really had no choice and so deployed the lieutenant, took off the two points of shock and ordered the section to fall back from the hedge.


Next German phase sees some of their squads go onto Overwatch, while others moved forward. The German FOO also decided to turn up.

The Paras next phase saw some more useful command dice, so I decided to deploy the second section. With the lieutenant on the table this required a deployment roll but I was successful and they deployed to the hedge line. With a German squad within Sten range the section fired, but only managed to kill one German and inflict 2 shock. I had hoped for a little better than that. I tried to bring on the sniper and the 2" mortar, but they failed to deploy.

The Germans phase saw them bring down a ranging shot that managed to land on top of the Bren team and kill one of the crew and add some shock. Fortunately his remaining command dice limited options for the grenadier squads and I could sense there was some caution in case the Paras deployed another section (if only I had one to deploy!).

Things didn't look good on the hedge line and so Section 2 also fell back to try to avoid the impending barrage and/or the blast of MG42s. The combined effects of the shock and terrain meant they struggled to move fast enough and so would likely find themselves under the barrage when it arrived.

In the next German phase the barrage duly came crashing down. While it did little harm to both sections they are now pinned and with no sign of a CoC dice on the horizon it would be some time before I could hope for a turn end to lift the barrage. I began to feel it was probably time to say my farewells and withdraw. We played out one more phase and it was clear the only outcome was likely to be further casualties to me for little or no gain, and so with everyone within 12" of a JoP, we withdrew.


So, a fairly swift and clear cut German victory. The Paras suffered four casualties, resulting in two men lost permanently, one wounded and one returned to duty. The Germans suffered only a single casualty wounded and as this platoon is not available for the next scenario they will be back to full strength next time they appear. All round a very satisfying bit of work for the Germans and a lacklustre start for the Paras.

There were lots of useful lessons in this defeat. With only two sections available I needed to avoid grouping them close together once I saw his FO appear, as the barrage effectively took my entire force out of action. I don't think the hedge line is necessarily that attractive a point to stand and fight. Certainly not when you are outnumbered by panzer grenadiers. It probably would have been best to let the Germans come to me, deploy quickly and fire and then withdraw. Not a very exciting game plan but probably the most sensible in the context of the campaign. We live and learn.

Still, I didn't expect too much from the Paras in this one, especially as they start off understrength and with no support options. The Germans have had it easy, but hopefully as the fighting edges closer into Ranville and the Paras begin to see men turn up from the drop zones things will become more difficult.

You can follow what happens next in Scenario 2 Probe among the Hedgerows
Posted by The Tactical Painter at 21:37