For some reason, while 20mm or 1/72 is extremely well catered for in terms of figures and vehicles, the same can't be said for terrain and in particular MDF buildings.  I have several from the Charlie Foxtrot Models range that I particularly like and use regularly for games set in Normandy or other parts of Europe.  So, it's always good to hear about new ranges in 20mm and I was particularly pleased to see the 20mm buildings from Sarissa Precision for the Eastern Front. 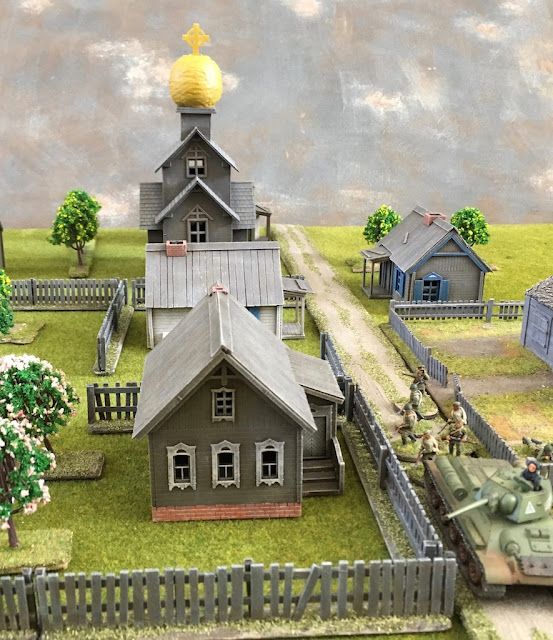 I have a few of the small Russian village houses from Blotz but I've always wanted to add some more variety.  I particularly liked the idea of a church and that's one of the offerings from Sarissa.  They also have a nice looking Russian house that would add variety to those I already owned. 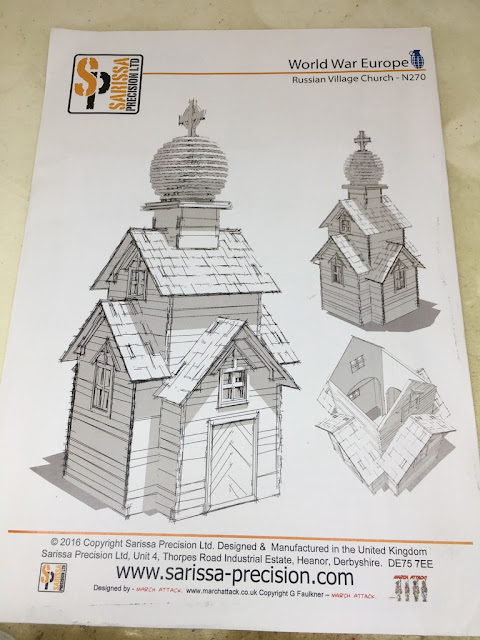 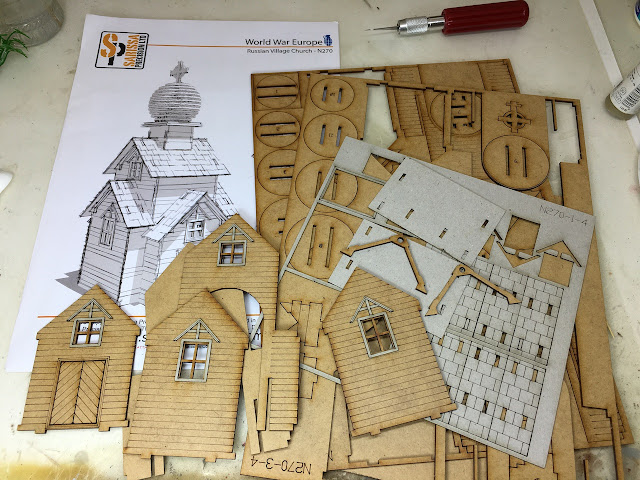 What I liked about their buildings is the addition of the greyboard fine features that add a level of detail that lift the buildings.  My only issue was with the dome on the roof of the church which clearly shows the limitation of MDF.  I wasn't overly concerned and thought a bit of work with some filler or similar would sort that one out.

At the same time I put together the Russian village house and the two will work well together and look good to scale with my figures and vehicles. 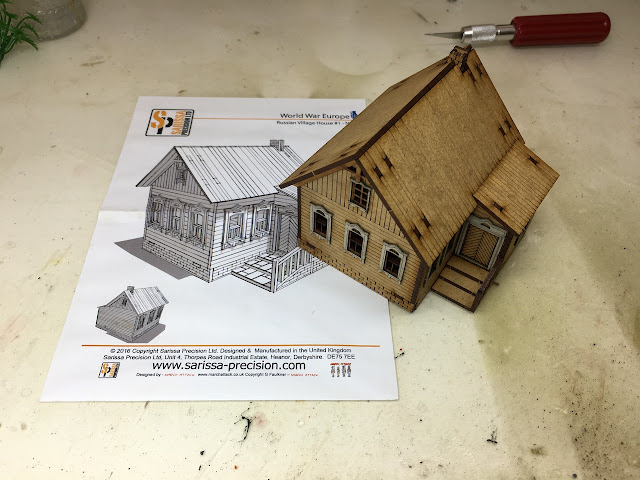 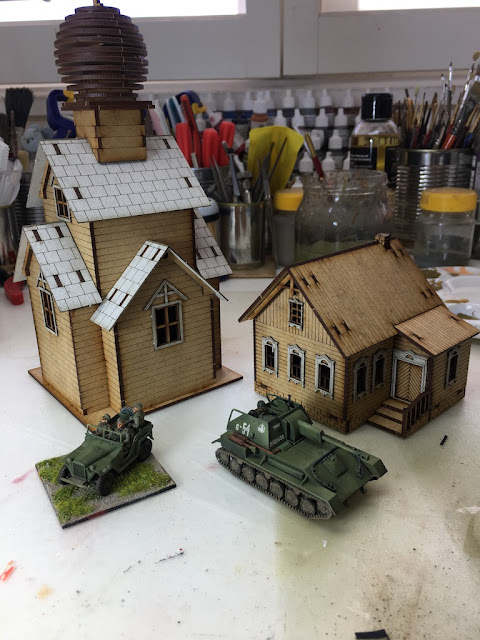 There were two things that I wanted to change or improve.  I wanted to add roof tiles to the church and add planks to the house roof, but the most obvious thing to work on was the church dome.  Since embarking on this project I've seen articles in other forums suggesting you use the dome moulds designed for the end of curtain rails.  A bit late now! I had already decided to use some kitchen paper towel soaked in diluted PVA to wrap the dome.

The roof tiles were from Charlie Foxtrot.  They are easy to apply and work very well with absolutely no wastage. 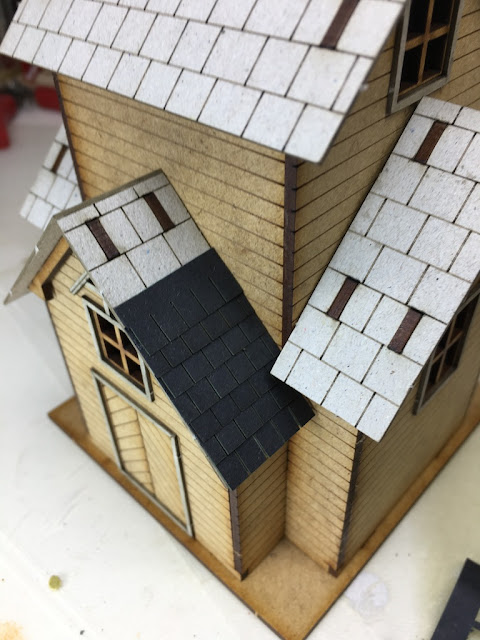 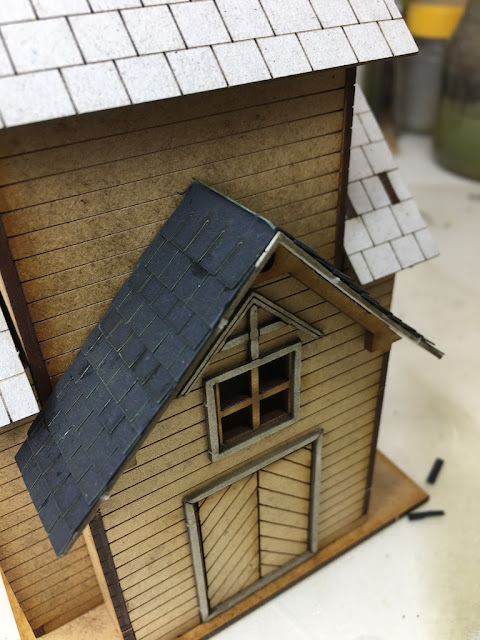 Next I went to work on the dome. 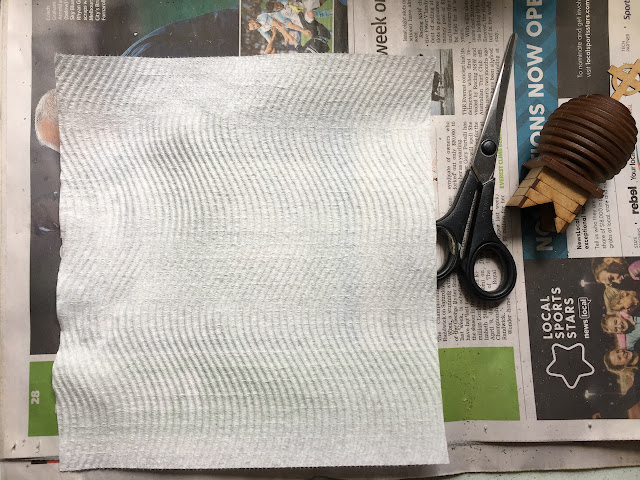 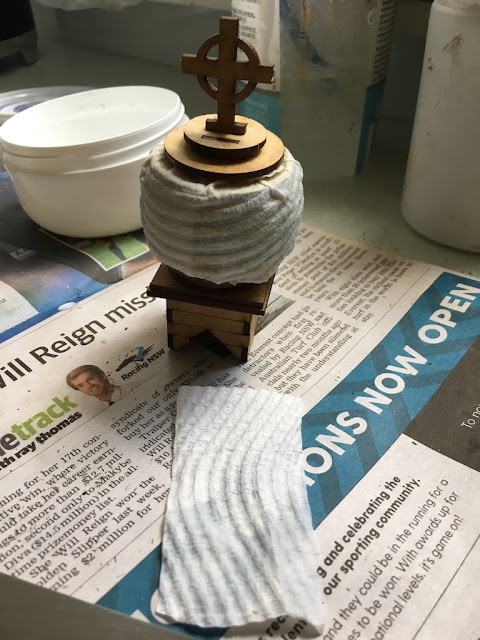 This worked reasonably well, but not well enough, so once it had dried I also gave it a coat of plaster and was then happier.   Here it is with roof tiles and the dome.  In hindsight the dome is too large and could really do with being changed altogether. 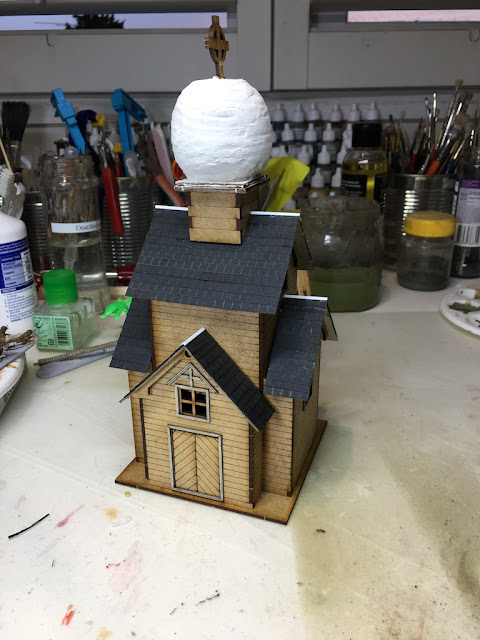 Before setting to work painting, the whole thing gets a coat of grey primer from a rattle can. 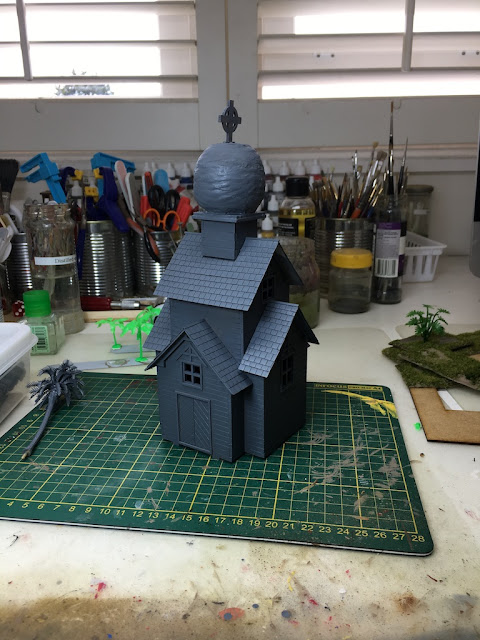 The village house worked well among my existing houses.  These I had painted in a hurry for a game I was putting on and I have never been totally happy with them. So I decided I would give all of the houses a new roof and a new paint job.  Unfortunately I didn't take an work in progress shots for that bit of work, but here's a before shot.


I wanted a faded dark wood effect for the church and a gold dome.  I didn't think painting it gold would work so went for a faded yellow/brown.  It's not quite as bright as it looks in the pictures but it may need to have a brown wash to tone things down. 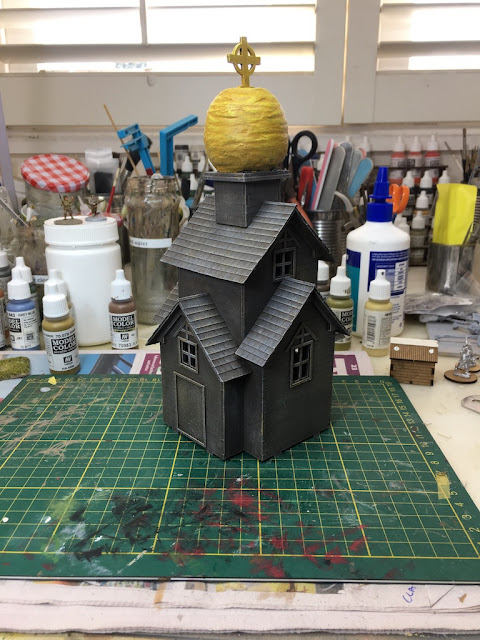 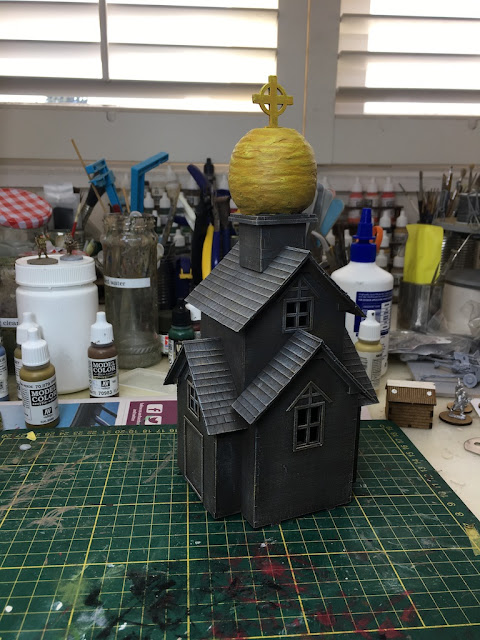 With the village houses repainted and re-roofed here they are in a game setting.  Overall I'm happy, although one day I may have to revisit that church dome and look at a better alternative.  It would be simple enough to remove and replace it.  It's very tempting. 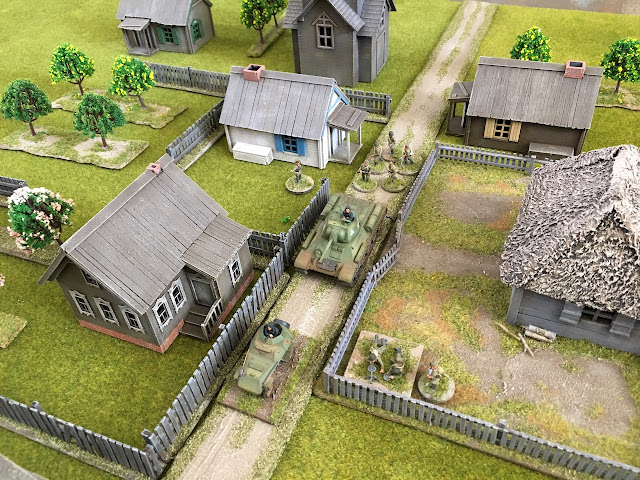 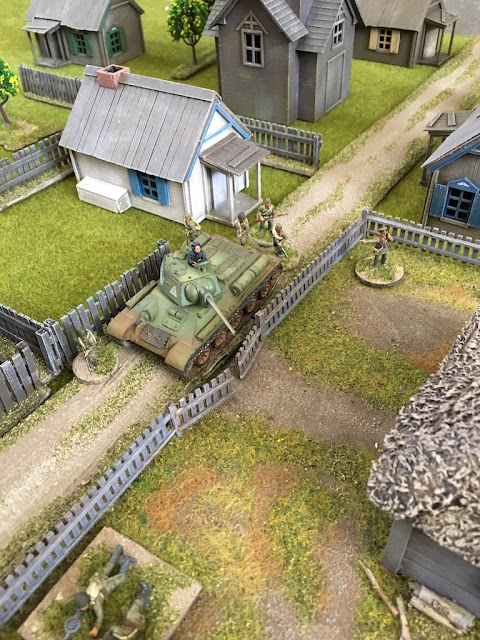 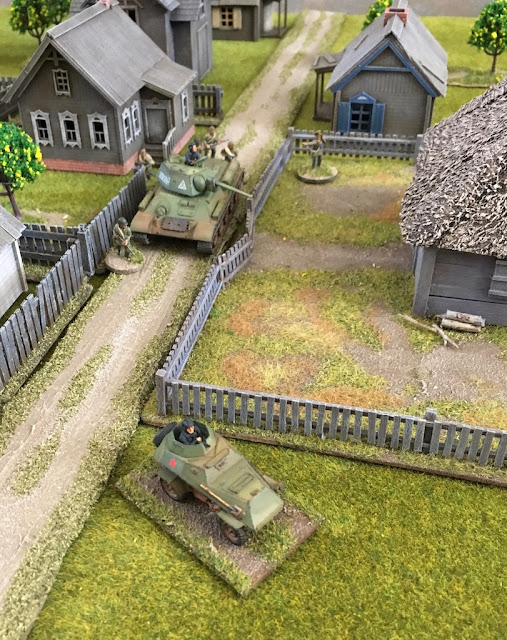 UPDATE: Well, I was good for my word. I have revisited that church dome because I really wasn't very happy with the result. So here is what I did instead - it was easy and a lot less messy than the first version.

I decided to abandon the MDF dome altogether and find something elsewhere. While researching pictures of real Russian churches I began to think the domes were not dissimilar in shape from the end fittings for curtain rails (which I now know are called finials. It's amazing what you learn while making little model buildings). So, off to the hardware store I went and I found these. 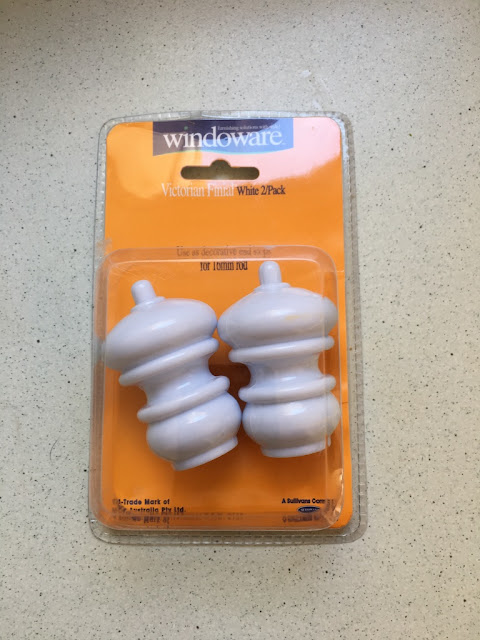 With a little bit of surgery I removed elements from the top and the bottom to get the desired shape. I then re-used the MDF cross from the original Sarissa model and attached that to the top. 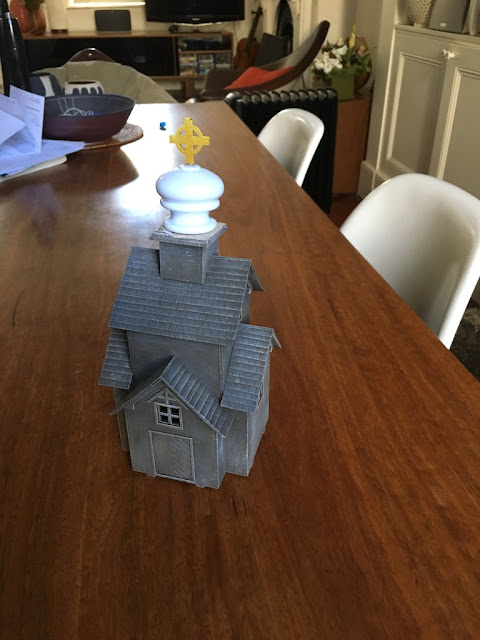 These domes can sometime be gold plated, but I'm assuming a fairly modest Russian community for most of my villages and it looks like blue domes are also popular. I did however indulge them with a gold cross. I think this is much improved and I'm happy with the result. A great enhancement for little cost and little work. 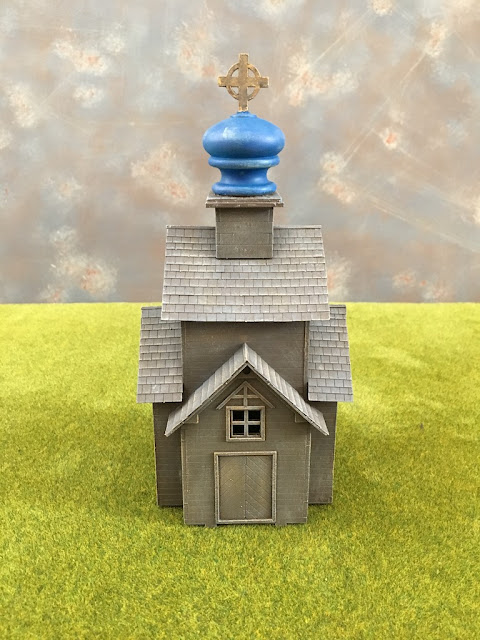 Posted by The Tactical Painter at 12:16