For the fifth campaign turn we are back at Scenario 3 The Corridor of Death. This will be the third time we play this scenario. The first game never really happened in the sense that the Paras managed to successfully call in a naval bombardment and disrupt German plans. So the second playing was the first time the Paras and Von Luck's men traded shots in anger in Ranville and you can follow the action here Corridor of Death (Round one).

That game was a resounding victory for the Para platoon, effectively writing off the German #1 platoon for the campaign. The Paras themselves suffered no permanent losses and remained in good shape. On that basis I saw no reason to replace them with a fresh platoon just yet.

This third scenario was make or break for the Germans. They have eight campaign games to gain a victory. This was about to be campaign game five, which meant if they don't win this one they would have to win every subsequent scenario to achieve victory. Losing didn't mean victory was impossible, but it would certainly make it a tall order. With that in mind I planned to try and do as much damage as I could to this next German platoon. This was the last time I intended to use my original platoon, so I felt I could take some casualties in the process without the risk of carrying those losses into the following games (although that cavalier attitude to the men's lives might not boost their opinion of me).

Annoyingly, the final missing team from the parachute drop, the PIAT team, still failed to show up. I really didn't want to have to spend support points on bringing in what I felt I should already have. I had seven support points, so decided on a Roadblock instead of a PIAT team. The terrain is very restricted for the available German vehicles, none of which are sturdy enough to drive through the tall stone walls. I knew a roadblock would absolutely guarantee a limited range of movement for any AFV, while the PIAT could end up a one-shot wonder or die trying to get a shot off. Remaining support points went on an additional section of Paras and an Adjutant. I wanted to be able to get both senior leaders on the table and try to make full use of 'concentrated fire' with the bren teams to inflict casualties.

German Force Morale was eight and the British was nine, giving them the initiative. The Germans had five free moves with their patrol markers, but at the end of the phase our Jump Off Point placement varied very little from the previous playing. 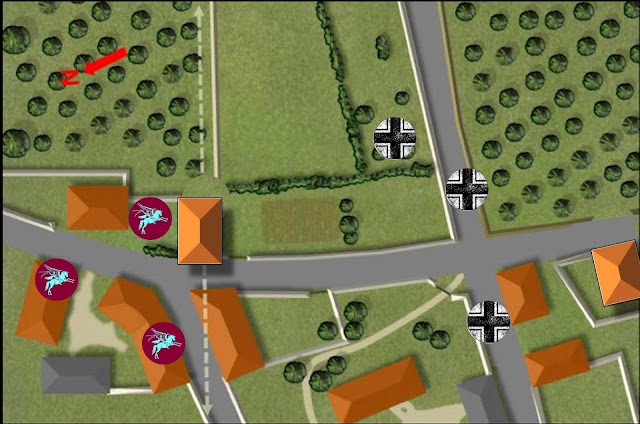 The Germans learn that the Paras have blocked off the main road into the town.


Despite holding the initiative the Paras decide to remain hidden in their first phase and wait to see what the Germans had in mind. It was soon clear that Dave was following a similar pattern to his last assault into Ranville. He deployed two squads to his right flank with a senior leader. That was all very familiar, so what did he have in mind that was going to be different? Firstly there was no Werfer pre-game barrage, so I knew I would have no issue deploying, but clearly he had another plan.

He was already aware that I was taking a different approach with the appearance of the roadblock, but what did he have in mind?

I thought I would approach this differently by trying to inflict casualties whenever I had a good opportunity. With the German right flank facing a move across fairly open ground I really thought I should take full advantage to hurt him before pulling back. Once the two German squads appeared on the table I decided to make a concerted and quick effort to take these out before pulling over to the other flank to deal with what I was sure would be his other avenue of approach.

My command dice allowed me a lot of flexibility and so I deployed a senior leader and the support section, with its two bren teams, to the upper level of the farmhouse. A rifle section went into the ground level. In the upper level of the barn behind the farmhouse I placed the Bren team from my one depleted section. The barn has only one window facing the Germans but the line of sight over the high wall into the fields was a good one.  That gave me four bren teams that could fire, plus a number of riflemen.


Using the CI of the Senior Leader and the Junior leaders I used 'concentrated fire' to try to take out individual MG42 teams. I was aiming for a hit and run result before too much fire could be returned my way. Regrettably the Paras were not on form today and the unerring accuracy they demonstrated in the previous encounter deserted them. The Germans took only two casualties and a few points of shock, but were otherwise unscathed. That wasn't supposed to happen. The German squad on Overwatch returned fire to the upper level and immediately killed two Paras. With elite troops in hard cover at effective range I was hoping I could me more resilient, but not so.

When the German phase arrives I sense I might be in a world of hurt. I am right. Hello, the Lorraine Schlepper.


A 150mm HE round comes crashing into the upper level of the farmhouse. I'm lucky to get away with only two casualties and some shock, but what it does do, is make the building unstable. The section corporal takes one of the hits and wounds taking British morale down to 8. With two sections and a senior leader in there I will need to get out quick before the turn ends.

The German squads return fire and there are more casualties. The wounded corporal is hit and killed and British morale drops to seven. The other casualties see one of the bren teams wiped out and that their force morale down to six. I am sensing I may have been far too over-confident here. Plan A hasn't worked and I don't really have a great Plan B. Then I discover Dave has opted for a mortar barrage in preference to the pre-game barrage and on comes a forward observer.


Well, with an unstable building, the Lorraine Schlepper, the MG42s and the prospect of a mortar barrage it really is time to get the Paras out of that building and quickly. I deploy the 2" mortar and we drop some smoke. 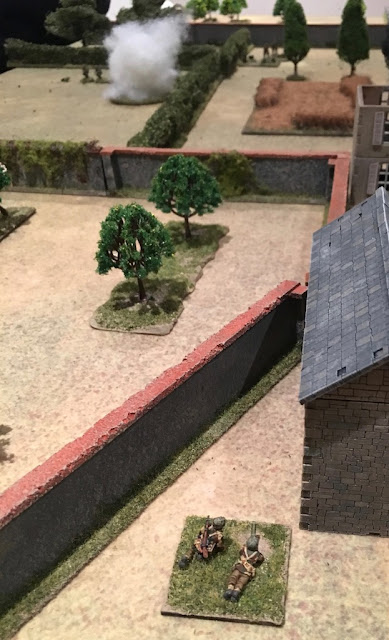 Then the process of emptying the building begins. 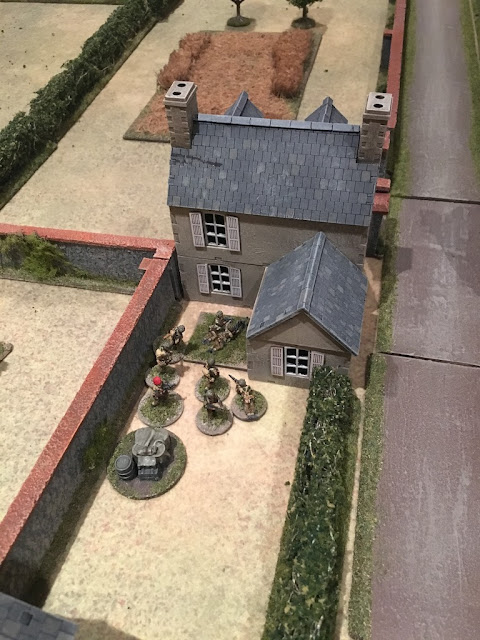 It can't happen fast enough and before long a ranging shot comes crashing through the roof. 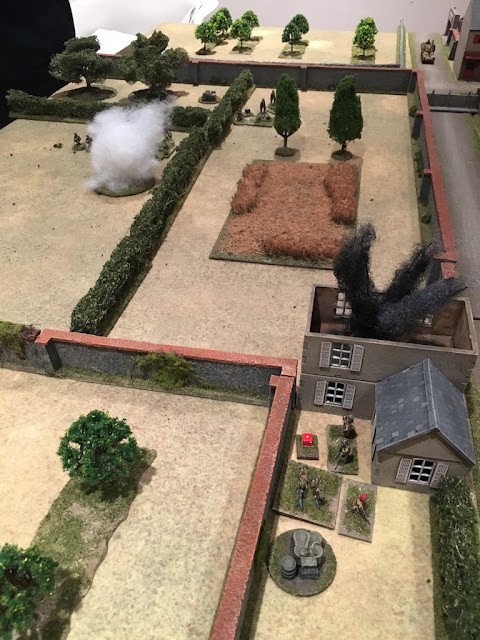 By the next phase I've got one section clear, but when the barrage comes down it catches what is left of the bren section in the open. 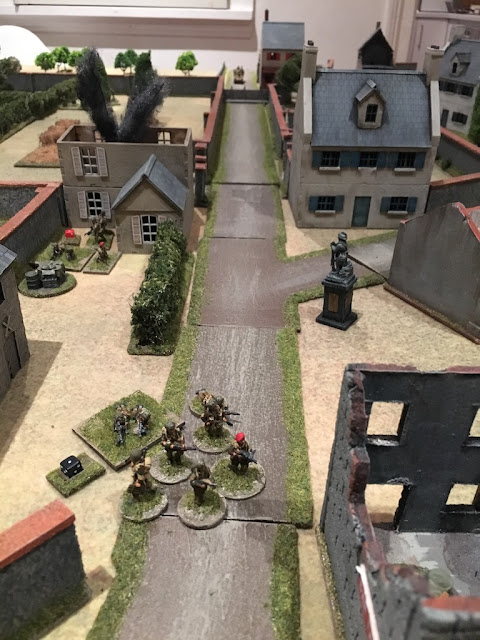 I begin to feel this is all going horribly wrong and I'm paying the price for that rather rash decision to try to take out his squads in the fields. At the last playing I was very cautious and waited for him to come to me, now I feel I've offered myself up on a plate. Not smart play.


With the barrage coming down and most line of sight blocked the Germans advance on both flanks.


The Paras pull back and reform a defensive position in the rear buildings. Everything is a bit disjointed and I only have one section still to deploy. Meanwhile the barrage continues to hammer my pinned section, finally wiping out the remaining bren team and taking British FM down to five. The senior leader has clearly found some good cover because he's surviving all they can throw at him but that's a small mercy, things are not going well here.


As the German left flank approaches the wall I deploy my final section. I want to cover a possible flank move and the line of sight from the buildings won't let me, so I go into the street in overwatch. It's dangerous, but I'm getting desperate.

The Germans decide there's no rush and bide their time, bringing up some additional men.


So what follows is almost comical, as both sides start lobbing grenades over the wall, but neither of us are very successful. Things grind to a halt on this front for a while, but I'm feeling under pressure now.

On the other flank the Germans have got into the large orchard and begin swinging around to the flank. Pressure is building from both sides now. 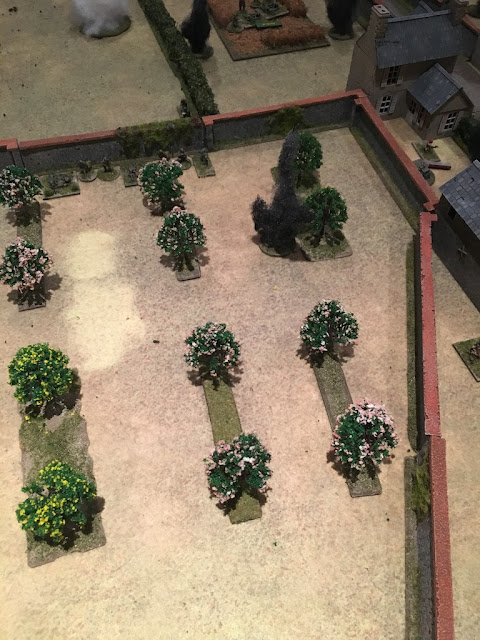 Back to the other flank and finally a German grenade has an effect, wounding the Para's section leader and incapacitating him for the remainder of the turn. British morale holds steady. I fall back into the building and the German senior leader puts a smoke grenade over the wall and sends one section into the road. I'm being enveloped on both flanks. I have a CoC dice I could use to end the turn, but it would be a mixed blessing. For now the barrage is giving me as much protection as it is hurting me. It would enable me to get my section leader back on his feet and my senior leader out from under the barrage, except for one thing, Dave has a CoC dice as well, which he could well use to keep the barrage going.

Dave decides he can afford to lift the barrage anyway as he's now ready to close with me. On his right he moves up to the orchard wall and neutralises my jump-off-point. I decide to use my CoC dice to move it and he uses his CoC dice to interrupt. He activates the section behind the wall and comes over it onto the JoP and into close combat range of my lone senior leader. The odds are not good and although my leader goes down valiantly, it's another blow to force morale and it drops to three. 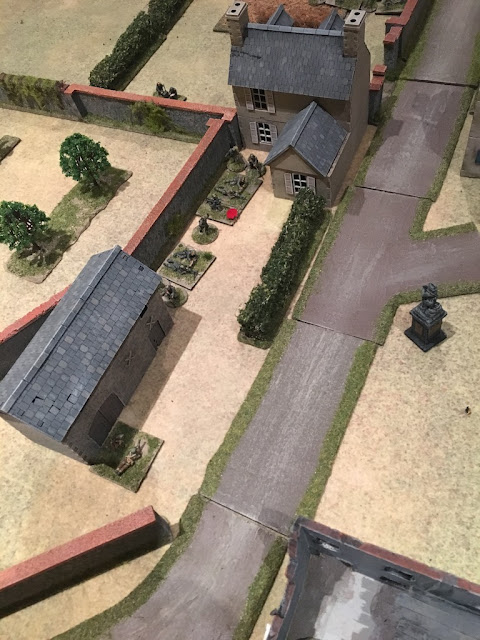 Dave now ends the turn and captures my JoP at which point it's very clear which way this game has swung. After the success of the previous game the Paras are a chastened force. I made the fatal mistake of putting too much store on a single event. To succeed, my initial deployment really needed to have two phases of devastating effect on his sections in the field. I didn't even come close and instead was on the receiving end of devastating firepower myself.

Unlike the previous encounter, Dave took his time and worked his way around me. He was patient and waited for the right moments and he used his support well. I was the complete opposite and paid the price.

This puts the Germans very much back in the campaign, but it's still all there to fight for. We have the potential for three more games across two more scenarios. The next scenario happens to the east of Ranville where a fresh platoon from 13 Para will be available. If they can't stop the Germans then the final scenario will allow me to play a fresh platoon from 12 Para. The Germans have two full platoons plus the remnants of #1 platoon to feed in as replacements, so we go into the end phase with strong forces available. With any luck this one will come down to the wire.

So next we move slightly to the east of Ranville as the Germans attempt an outflanking move.  You can follow the action here: Scenario 4 The Church on the Flank

Posted by The Tactical Painter at 15:48