The Germans started well, gaining four free patrol marker moves before the Paras even started. Choosing to use only three markers Dave moved aggressively forward and had soon locked down all his markers where he wanted them before I was totally happy with mine. So the JoPs looked like this (Paras are red, Germans are blue): 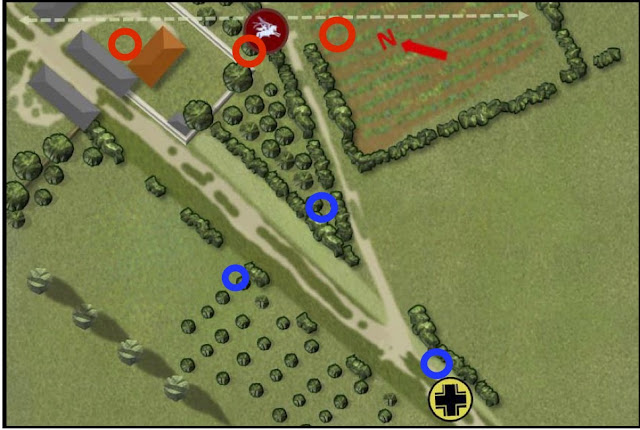 The Germans deployed a squad to each flank and an MMG support choice went into the woods from the central JoP. Until then I had elected to remain hidden waiting to gauge where he was coming from, but the arrival of the MMG team in the woods and so close to one of my JoPs could not be ignored.
Fearing a bold move by the Germans down the middle I decided I would deploy #1 section outside the wall surrounding the farm and put them on overwatch. From there they could cover the centre and turn to cover my left flank if needed. 
As if that doesn't look ominous enough, there are a few more new arrivals on this flank in the form of a forward observer and the German senior leader, both position themselves behind the hedgerow ready to give support and leadership. It's not looking good. 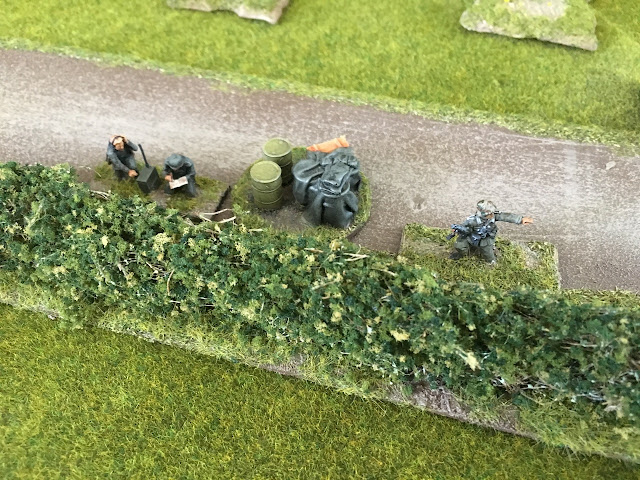 So while Dave was cautiously moving down that left flank, he took advantage of a double phase to decide it's time for the German squad on my right flank to make a bold move for that table edge. His first move leaves him right in the open, in sight of the bren team, but within a possible normal move off the table edge in his second phase. It was time to use my CoC dice to interrupt and the bren in the farm yard opened up.

I only managed two hits, both of which had no effect. Hmmm, that didn't bode well. Instead of using the second phase to move his squad off the table, Dave decides this is too good a chance to inflict more pain on the paras. With a blast of MG42 fire he kills two of the bren team and inflicts three shock, pinning the remaining crew member with the bren and the attached junior leader. That's seven casualties so far for the paras and overwhelming German force still heading their way.

With the Platoon leader on the table to try and influence the defence, it's clear to him, as it is to all the paras, that the day belongs to the Germans. A withdrawal into the town itself is in order and with that the paras use their next phase to slip away.


Well, that was short and bloody. The Germans lost five casualties, all from the MMG team and so their 2nd Platoon remains at full strength. With the German 1st Platoon getting their wounded man back from Scenario 1 the Germans still have three full strength platoons to use. The Paras have lost four men killed from the core platoon and for the next scenario will have two wounded men unavailable. I have the option next scenario to bring in a fresh platoon, but that one will have to last the full distance, so I need to give this some careful thought. The Para CO is not impressed and his opinion is now at -3 which will cost me a support point in future. The men have taken the loss of their comrades reasonably well and still have some faith in their commanders, their opinion is at -1. Despite all this the platoon commander's outlook remains happy (quite why, I'm not sure!).